When it comes to legendary franchises, they’re often inundated into our cultural DNA, as intrinsic to our very being, responsible for shaping our tastes and predilections throughout the years. And other times, we know jack squat about them. When it comes to Diablo, I fall squarely in the latter camp — while I’ve learned a couple of things over the years purely via osmosis, a week ago I had never touched a single entry. Hell, I’d never played any Blizzard games — not Warcraft, or Starcraft, or even the insanely popular top salt-per-capita generator Overwatch.

So when it came to this Switch port of Diablo III I knew only a couple things (most of which were now-irrelevant tidbits about the game’s infamous 2012 PC launch) and entered with a fresh mind. And as a complete newcomer to the franchise, I found Diablo III to be a largely enjoyable experience — even if its flaws tended to hit in areas I hold in high regard when it comes to a game’s value.

To Tristram and back

As someone with only a vague knowledge of Diablo’s storyline, I had no trouble getting into and understanding the plot. It kicks off with a fallen star from above crashing into a grand cathedral near Old Tristram, where the minions of hell once broke loose and ravaged the land. The comet portends an ill fate that will soon strike the world, and only your created character can hope to stop it. Along the way you’ll become embroiled with hellspawn, heavens guard, and all manner of lawful and chaotic evil in-between as you vie to save the world. 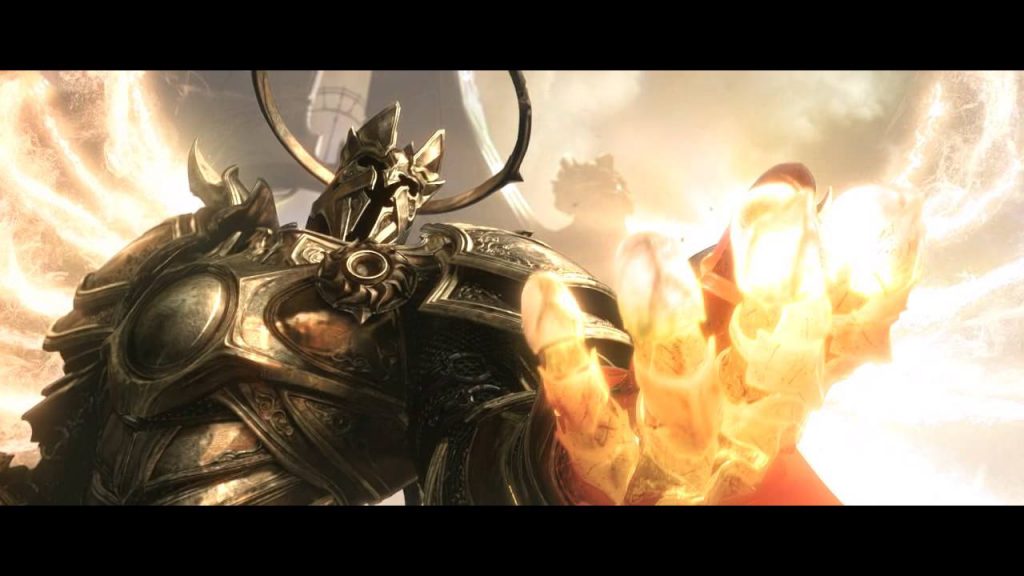 Diablo III’s plot left me pretty ambivalent in a lot of different ways, to the point where I’m not sure I’d say I actively liked or disliked it. The main conflict felt like the fairly typical good vs. evil spiel, with some hefty lore to bolster what was going on, but I never felt particularly invested. There were a number of points that felt like they leaned on knowledge of the first two games to provide emotional investment, and as a result I mostly shrugged my shoulders and moved on. There was never a moment when I felt particularly shocked, saddened, or satisfied, nor any times where I felt extremely upset or disapproving with the writing. The story was simply… extant.

Weirdly, while I found many of the major players in the plot to be fairly dry or uninteresting (with the exception of Tyrael), I was much more drawn to some of the smaller characters and NPCs. Characters about town or in events tended to have lighter and more humorous dialogue, and the three companions you can have solo all ended up far more compelling than any of the mythical beings encountered in the plot. There’s clearly some charm and creativity put into the product, but it seemed strange that the writing was stronger the farther away it was from the main plot. 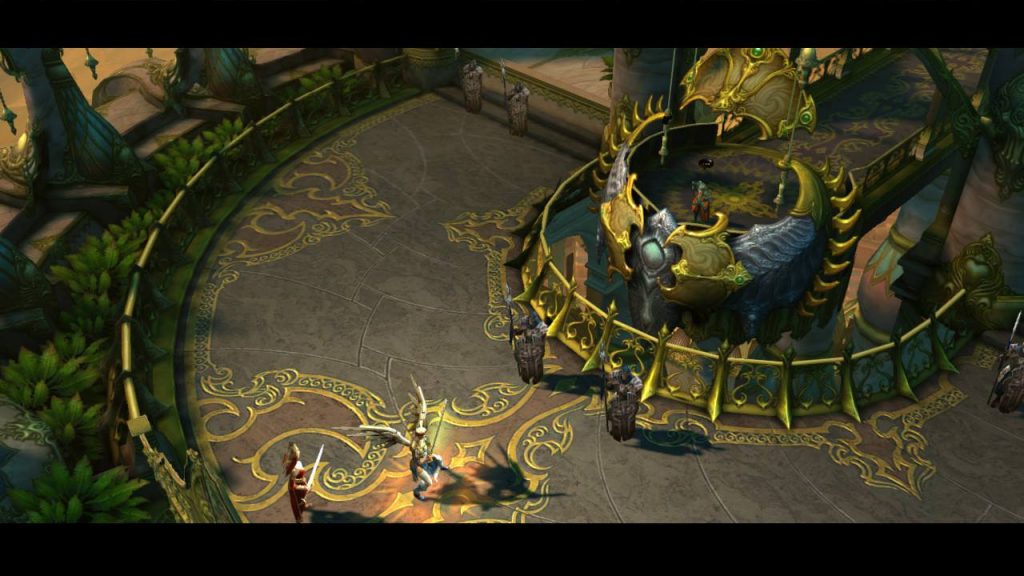 In other matters of mixed feelings — the game’s aesthetic. For something that goes for a religious-themed dark fantasy kind of concept and setting, the effort to convey that atmosphere felt half-hearted. Environments were generally on the darker and moodier end, but the color saturation and contrast at times felt rather high. Usually I love bright and vibrant art direction, but here it muddies the potential for a more grizzled, dim look that would make the game stand out. The music also didn’t feel particularly noteworthy — a few tracks occasionally perked my ears up, but I can’t recall any tunes now that I’ve finished playing.

But for all those flaws, there are a couple aspects of the production value that do stick out. Which is coded language for “holy cannoli, how much does Blizzard spend on their cinematics?” There are only a half-dozen fully animated cutscenes throughout the game, but they’re so gorgeously rendered it feels like they single-handedly buoy the rest of the game’s visuals. I don’t know how much time or resources Blizzard pumps into these, but they most definitely stand out both in the moment and in memory, and as a big fan of quality animation they were a high point for me. Even if the rest of the game looks a bit dated in comparison (though it does run quite well on the Switch — I think I experienced exactly one frame rate drop during my entire playthrough).

My misgivings about story and appearance aside, there’s no denying just how fun Diablo III is to play. You’ll choose from one of seven classes, each with their own huge range of skills and playstyles, as you hack and slash through mobs upon mobs of demons, skeletons, and just about any other kind of creature you would find in the Ars Goetia. For my playthrough, I chose the monk, palming and high-kicking devils and ghouls in rapid succession, though I also tried a bit of the Demon Hunter and Witch Doctor classes. 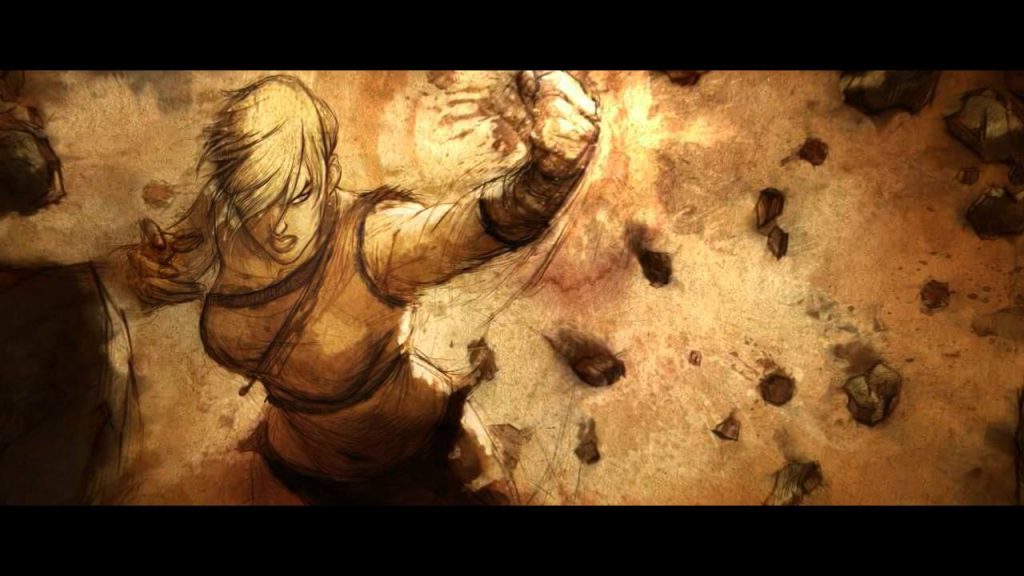 And while the start is a bit slow as you accrue skills and equipment, once it gets going it really gets going. You’ll be zipping along and causing piles of hellspawn to explode into bloody giblets at a speed faster than almost any other action RPG I’ve played. There’s a great amount of flexibility in how you outfit yourself — even without changing class, you can completely swap your role or playstyle by just shifting a few abilities around. It makes rampaging through the hordes of enemies much less stale than it could potentially be.

This sweetness is made even better by a Diablo staple: loot. You’ll come across equipment with a variety of effects throughout your spelunking, with different rarities and slots that lead to an infinite number of possibilities. One or two drops of a Legendary item can completely change your game — for example, in the early game I obtained a Legendary Daibo simply called “Balance” that increased the power of one of my moves by over 500%, turning it into an overpowered annihilator that lasted well into Act III. One-of-a-kind, organic stories like that really stick out compared to stock equipment that you can find in any game. Add on customization and transmogrification, and the breadth of options for both stats and appearance will never run out. 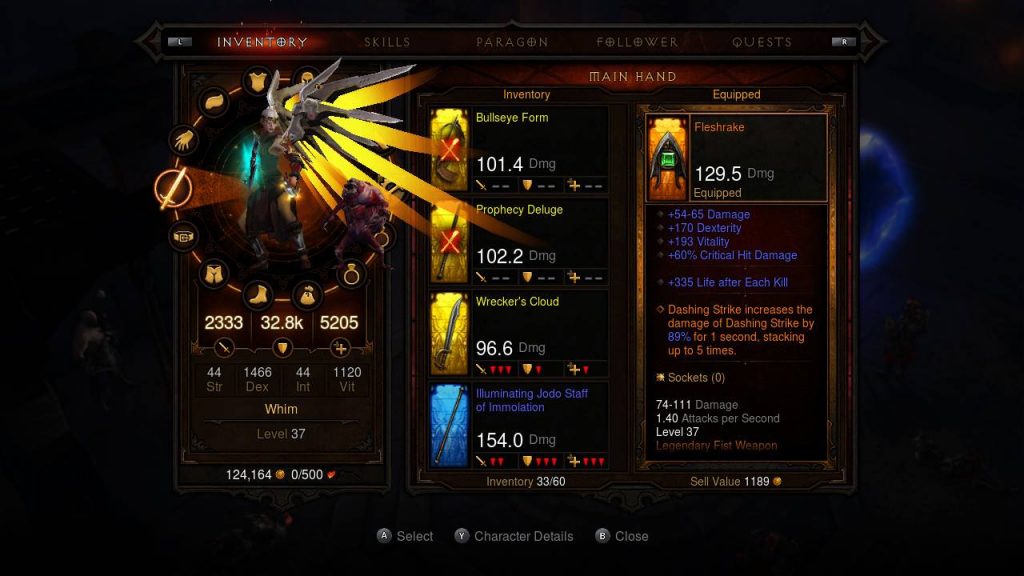 The game has fun multiplayer, too! While I only tinkered around a bit in co-op, I had a rad time with our very own Lauren Ganos collecting loot and smiting the opposition. It allows for more support-oriented builds for people not as into the nitty-gritty fist-fighting, and felt pretty stable as far as Switch online services go. There were two main issues — one, there’s no in-game communication features that I saw (I assume that any present are fairly lackluster), and you’ll of course need a Nintendo Switch Online subscription to use it.

While most of the game is pretty samey in terms of quality (save a somewhat slower beginning), but I will call special attention to Act V, which was originally part of the Reaper of Souls expansion — it’s a noticeable step up in terms of quality all around, striking a more distinct color pallet and improving the level design while introducing a villain that’s at least slightly more interesting than Literal Embodiment of Evil. It’s a shame that it only represents around a fifth of the total product, because if the whole experience were on that level I think I would enjoy the whole thing on another level. 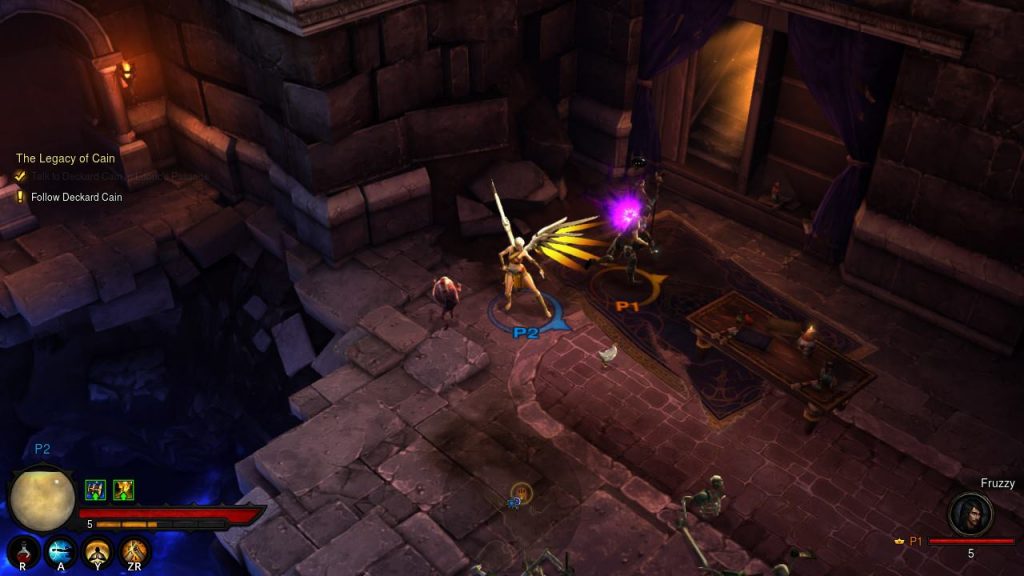 I’ll also make a brief note for Switch exclusive stuff, which is minor but appreciated. The Ganondorf armor fits the Diablo styling like a glove, and while obtaining the full set can be pricy, it feels great to be the King of Evil… especially with a Cucco by your side. I didn’t get to test out amiibo functionality (as I’m currently without any of the figurines — scandalous, I know!), but they seem to fit in well with the core gameplay loop. And you can never say no to more loot, can you? 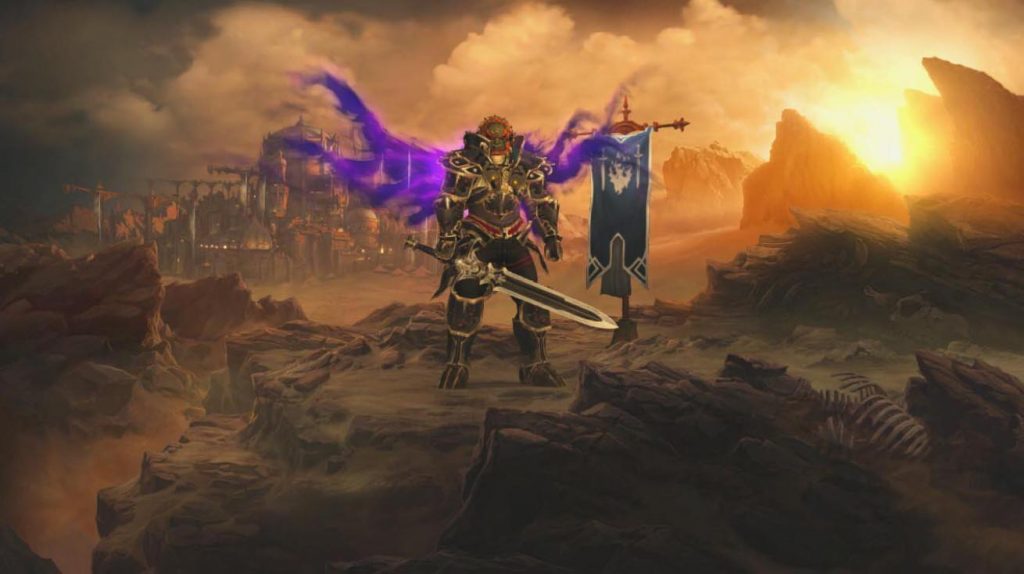 Scoring this one is particularly difficult, as while I feel the game does get a lot right, the areas I found it lacking in — enticing characters, a strong aesthetic, varied level design — are things I hold particularly essential to my own tastes. It’s a fine pick for your Switch library, and certainly among the best values you can find on the system in terms of sheer content. But it didn’t appeal to my particulars quite as much as I had hoped it might.

Ultimately, I did thoroughly enjoy my time with Diablo III, but I couldn’t say that it was a particularly revelatory experience, either. It got the gameplay down pretty pat, to be sure, but it was lacking that “zing” factor, that little prick of inspiration or nuance that made me feel anything special or noteworthy. Part of it could just be attributed to age — the game is over six years old now, after all — but for a franchise so known and beloved, I think I expected something more to pop. Maybe I just needed to be at a Diablo II LAN party in the early ’00s to understand. But as far as this game stands it’s… good. Kinda great. But not fantastic. 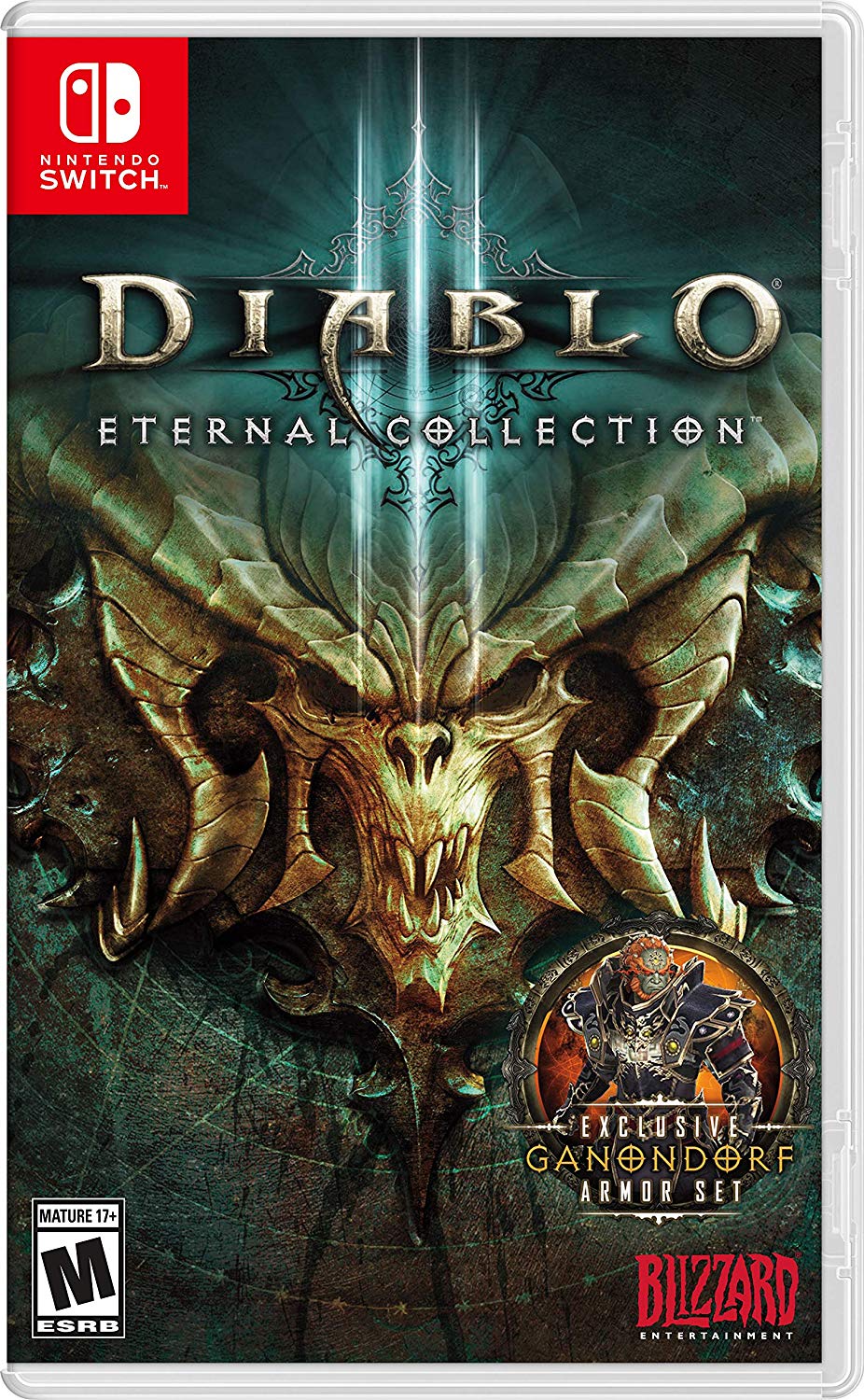