During the September 13th Nintendo Direct, Square Enix brought Final Fantasy back to Nintendo in full force. While ports are planned throughout the end of the year and into 2019, the company kicked things off with a rendition of the series’ latest mainline entry: Final Fantasy XV Pocket Edition HD. But is it a good way to experience the adventure?

First things first, I should probably share my opinions on the main version of Final Fantasy XV, which I played on a PlayStation 4 Pro back when it launched in November of 2016. Like most every Final Fantasy game, it proved very divisive after launch, with some lauding over the character development and world while others criticized the plot and gameplay. I personally lean more towards the former camp, and ultimately I quite liked the game. It’s a bit of a mess, granted, but given its rocky development history the game came out better than anyone could have expected.

One thing that sets Pocket Edition apart, aside from obvious surface level differences, is its structure. This alone might alleviate one of the main sticking points of contention – the original game’s pacing. As the first modern open world Final Fantasy, XV had plenty of side quests that spanned the entire continent of Lucis, which often felt like they got in the way of the pretty urgent main plot. Pocket Edition instead takes a linear, chapter-based approach, with none of the open world adventure. 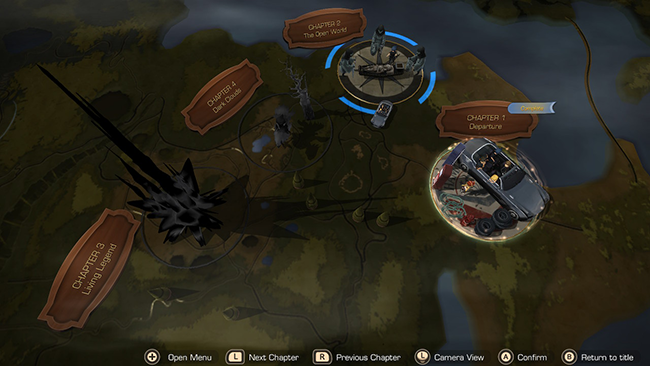 These chapters contain segmented areas based on iconic areas from the original title, like settlements and tombs, while traversal between them is usually an automatic car drive. That’s not to say it’s completely linear, however. Within each small area there are typically bonus objectives, like finding hidden Cactuar statues or food for recipes, while dungeons can be filled with twisting routes and locked doors.

So, Pocket Edition gets straight to the story, but is it well told? Well, what it makes up for in pacing it loses in detail. The core version of Final Fantasy XV is a gorgeous game, and while Pocket Edition does an admirable job capturing some elements of the stunning environments, the same can’t be said for the characters themselves. 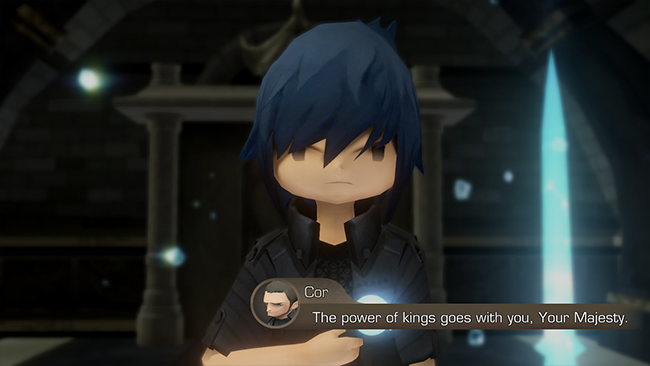 As the game was designed for less powerful hardware, Pocket Edition uses simplistic, low-polygon chibi designs for its characters. I actually don’t mind the look of them, but it’s the fact they barely emote that becomes a problem. Final Fantasy XV is a very emotional game, with its characters going on a road trip that’s equal parts joyous as it is horrific. You wouldn’t know it going from their chibi faces, which are practically frozen in the same expression throughout. Their mouths don’t even open to voice dialogue, which can look very bizarre blown up on a big TV.

There’s also a downside to the rapid pacing, in that there isn’t nearly as much time to digest information as its doled out. The world of XV is filled with deities, landmarks, political turmoil, and other, smaller details, all of which can be hard to comprehend in rapid succession. The core story is easily understood (Noctis wants to take his home back from the villainous Niflheim Empire), but you’d be forgiven for not following the intricacies thanks to Pocket Edition’s diluted approach. 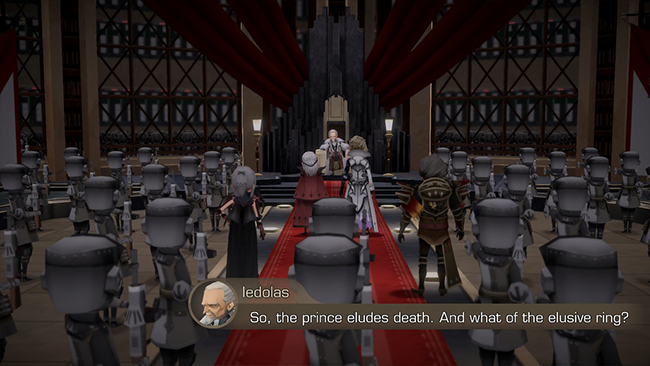 This compression also comes at the cost of most of the post-game updates that hit the main game. Many of these fleshed out aspects of the plot that severely needed it, but they’re almost all missing here. This also means the game doesn’t contain the stunning music scored by legendary composers like Yasunori Mitsuda (Chrono Trigger) and Keiichi Okabe (Nier), though the vast majority of Yoko Shimomura’s fantastic work for the core game makes the cut.

Revving up the Engine Sword

In terms of gameplay, Pocket Edition does a surprisingly decent job at emulating the combat of its source material, especially considering it started life as a smartphone game. Your main attacks are simple combo loops activated by holding down the Y button, while distant opponents can be hit with Warp Strike, which is just an X button press away. Some enemy attacks can also be countered by hitting B while a button prompt is on screen. 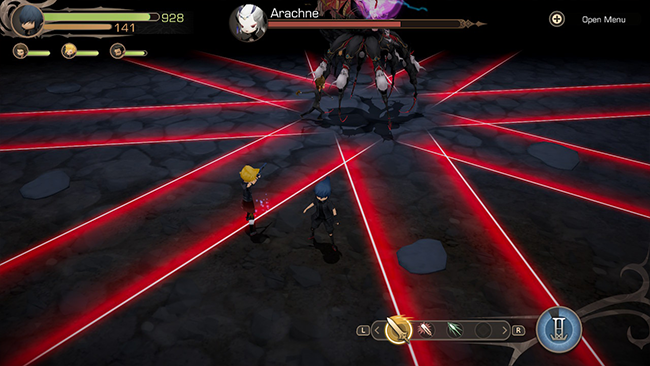 While at first this can seem incredibly simplistic, you later unlock more weaponry and special abilities that help change up the flow of battles. Fighting a large group of surrounding enemies? Break out the wide-reaching Greatsword. A boss’s large HP bar giving you trouble? Unleash your special Armiger, which deals consistently huge damage for a limited time.

Some of the main game’s issues are emulated too, unfortunately. While there are plenty of options in combat later on, it’s still quite easy and it’s hard to ever get a game over. Magic is somehow even more of a situational ability too — you draw an elemental spell from a special rock and can use it once, before having to find another source. More than once I used it too early in a battle before more monsters spawned in, making the battle more tedious than it needed to be.

While most of the touch screen controls are ported successfully to controller buttons, there are a few oddities. Menus can be frustrating to navigate, with it sometimes being hard to tell where your cursor even is, and you can only move through them with the analog stick — the D-pad isn’t used at all in the game. 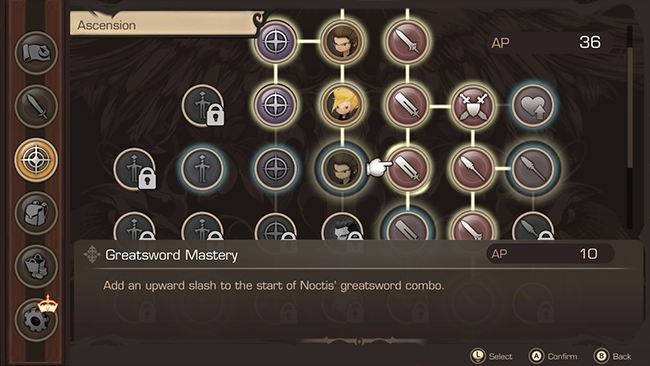 There are also certain points where you can target multiple objects on a screen. While the mobile game let you simply tap on the one you wanted, with the controller you have to precisely aim in their direction, which can be more than a little finicky. And don’t even get me started on the quick time events, which come out of nowhere with confusing prompts and do more to damage immersion than enhance it.

These hold-over touch screen problems could have been mitigated by allowing you to use the Switch’s own touch screen when un-docked, but in my experience there was no response and it’s seemingly disabled altogether.

If you’ve played Final Fantasy XV on any other system it’s understandable why that version of the game wasn’t ported to Switch. Even powerful consoles like the PS4 have issues running it at a consistent frame rate, after all. Oddly enough, though, even Pocket Edition has some strange technical quirks on Nintendo’s latest system.

Loading times, for instance, are strangely long, and several times you’ll notice the game stutter as it presumably loads in more assets. The frame rate can take a hit too in certain areas teeming with monsters. None of this is a deal-breaker, but it does make the game feel a bit unpolished despite its downgraded aesthetic.

Final Fantasy XV Pocket Edition isn’t the best way to experience the latest entry in the long-running series, but it’s not completely without merit. Those who want to experience the story again with a fresh new look, or simply want to enjoy its superior pacing, could have some fun with this miniaturized journey. Everyone else? It’s better to take the long road. 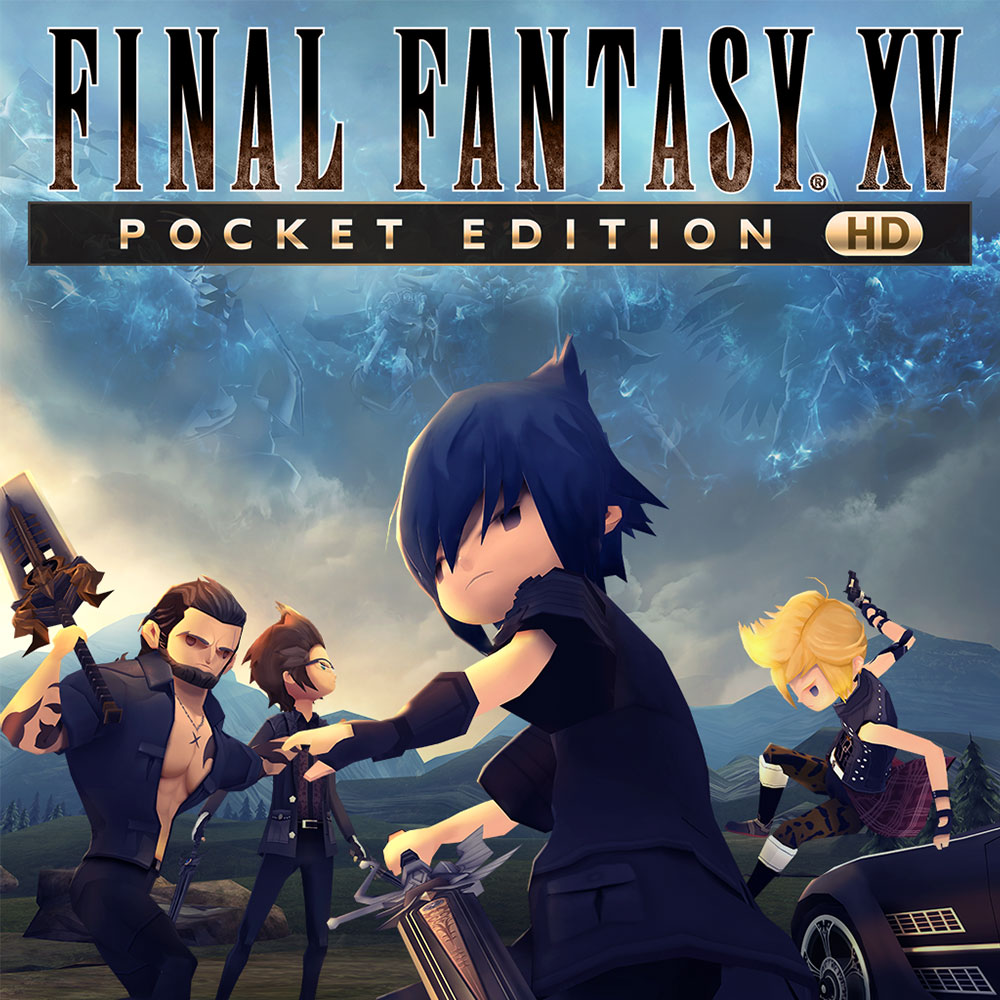