Welcome back to the PAX West Fifty-Game Frenzy, where I run down a grand total of 50 Switch games I played at PAX and you can decide which ones pique your interest! Last time, we covered some of the finer selections the Indie MegaBooth had to offer. And now, we’re delving into some picks from the prestigious PAX 10 (a curated selection of the most innovative indie games at the show), as well as a long-awaited sequel, and a peculiar mashup. Let’s mosey! 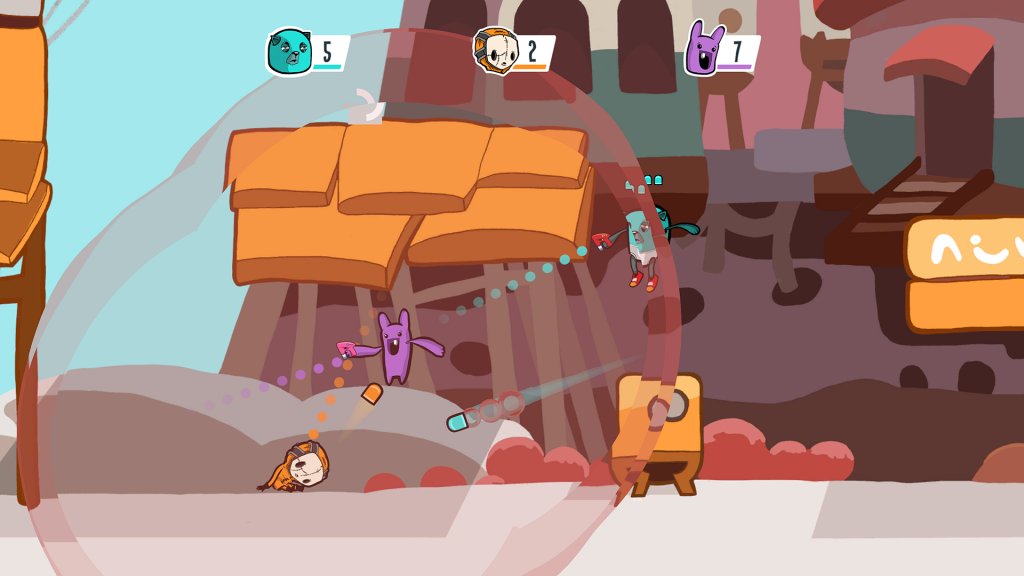 We, as a species, are constantly striving to attain one goal: to make a game that plays like the Matrix. Retimed is another essential step towards that important goal — this arena fighter plays like your typical shoot ‘em out, with a twist — any time a bullet flies near you, a “time bubble” forms around your character that slows things down, giving you the time and opportunity to weave out of the way, Neo style. Combined with a limited amount of ammo (until you pick up boxes), and you’ve got another solid round of multiplayer mayhem on your hands.

Retimed combines speedy manuevering and cinematic coolness alongside offering a particular sense of balance. Close up shots are much more likely to hit than far away ones, but doing so increases the risk to the player. Firing multiple shots at once can be costly, but it can also ensnare your foes in a tangle of gunfire that leaves them decimated. Combined with a goofy art style and an imminent release, and Retimed looks like it’ll serve alongside Towerfall as a great arena platform shooter releasing this month. 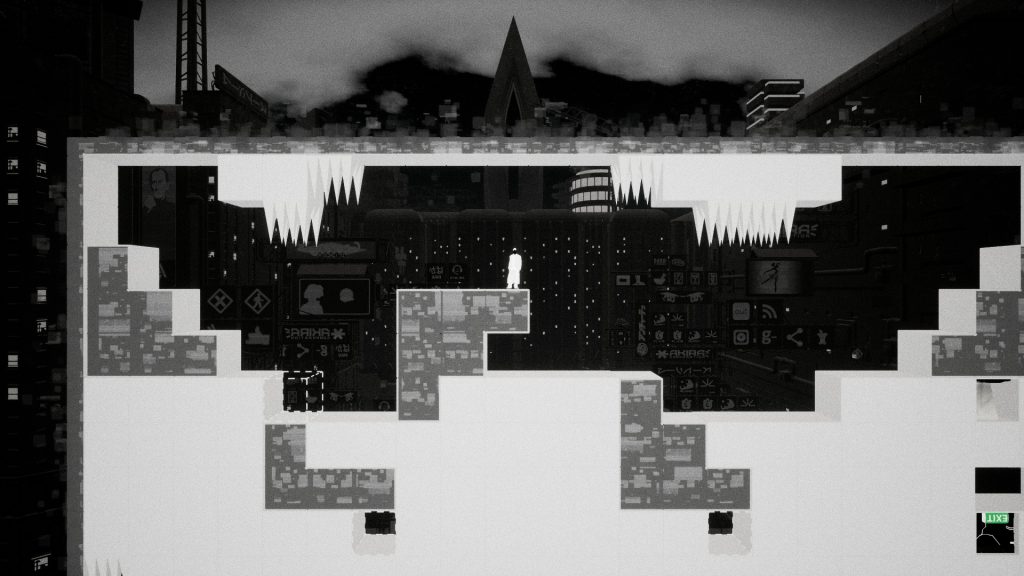 Here’s a game that’ll turn your world upside down! Shift Quantum is a monochromatic, noir themed thriller backdropping an inversion based puzzle game. By “shifting” into the landscape, the world flips upside down and color inverts, lending itself to a whole slew of crazy possibilities for obstacles and solutions in your path.

Sometimes there’s a strength in simplicity, and Shift Quantum delivers on that front. The one singular mechanic combined with a good variety of level design and obstacles (boxes, spikes, unshiftable terrain, and more) make for a compelling experience. It’s been out for a couple of months now, so head over to the eShop and send the devs some love.

Sometimes the act of working together is the toughest thing imaginable. With Friends Like These expresses this idea in full, taking two players (you can be solo, but you’d be missing out) and having them swap control between a ship and said vessel’s turret, requiring coordination, efficiency, and adaptability in order to take out a host of color-coordinated enemies and obstacles. As you move between zones of pink and blue (air and water within the game’s world), you must quickly change your control scheme in order to deal with enemy fire.

I’m a sucker for these sort of inventive co-op experiences, and With Friends Like These combines the charmingly adorable with a design that will tax your patience — in a good way. The woman I played with and I had a lot of fun clumsily meandering through the level, haphazard in terms of managing our tasks. While this one seems a bit far from release, I have no doubt that it’ll be a delightful experience to have with a friend and partner. So long as your bond is ironclad. 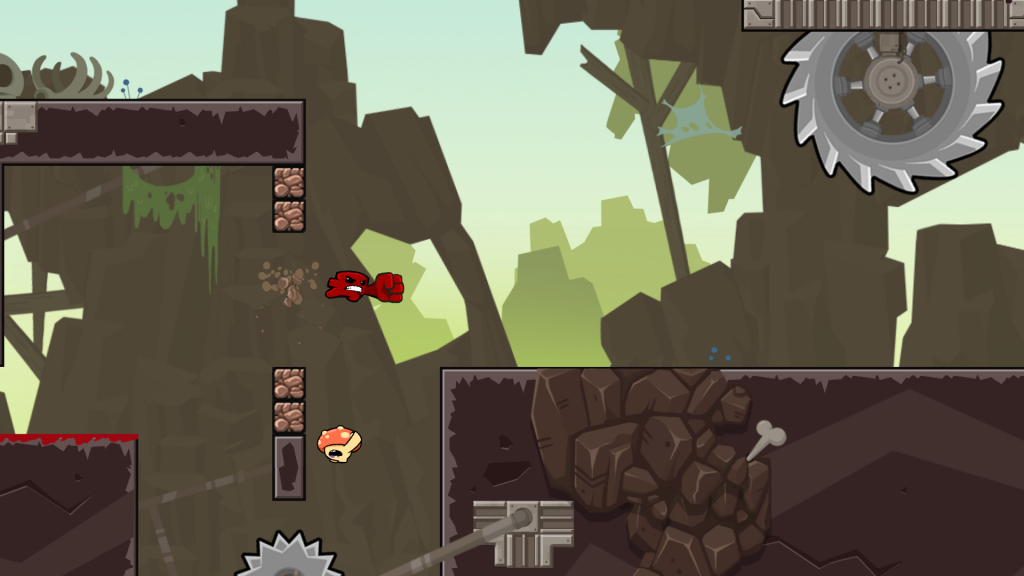 Super Meat Boy is perhaps the most iconic indie platformer out there, which is really sayin’ something. So when I heard that its long-awaited sequel would be an endless runner, I was skeptical. Fortunately, now that I’ve grasped it for myself, Super Meat Boy Forever is shaping up to be a worthwhile successor, keeping the same slippery physics but adding its own verve to the experience.

While running is automated, none of the levels are procedural or anything of the sort — they’re tightly knit and well crafted, relying not just on careful jumps but precise attacks in order to progress. Just going through the first world, I died a few dozen times, and the boss fight was a new kind of experience as far as control schemes went. Super Meat Boy Forever looks to be serving up some raw platforming goodness once again, so if you’re a fan then rest assured: the wait will be worth it. 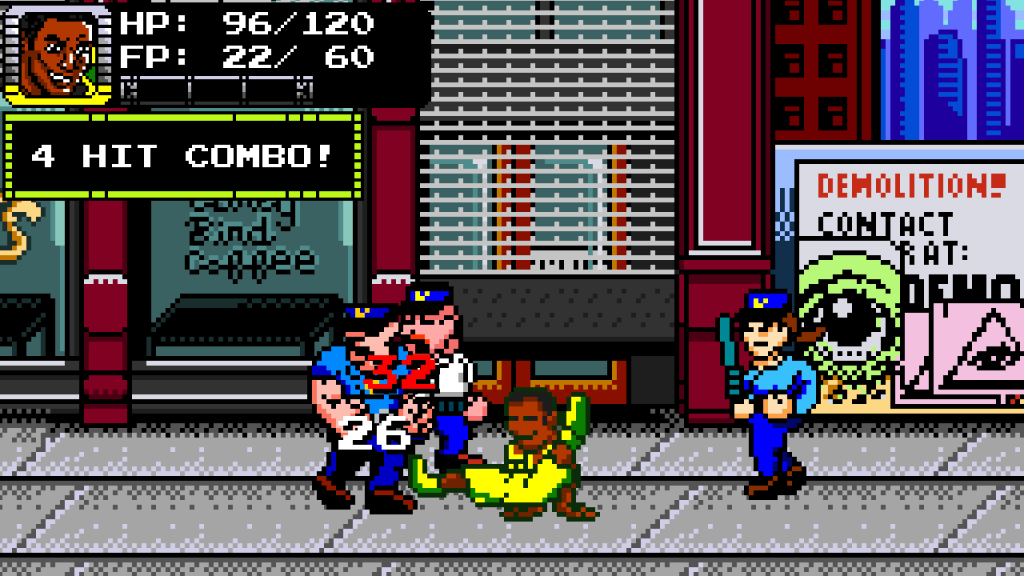 Some genre mashups were made in heaven… and others are so strangely novel that they justify their own existence. Treachery in Beatdown City is a beat-’em-up in the old arcade tradition, but instead of the typical button mashes you pull your moves off from a menu, and you’re able to commit a limited number of actions with a limited amount of an MP-style resource. Toss in three characters that play very differently and you’ve got a recipe for a very unique genre buster.

Treachery in Beatdown City clearly takes its page from the classics (its Bad Dudes-styled plot revolves around Ninja Dragon Terrorists kidnapping President “Blake Orama”), but forms its own identity, taking two ideas that should not work together and making them satisfying. Even as my butt was getting kicked by the buff enemies I was fighting, the injection of strategy into a medium generally devoid of it drew my attention. I’ll be on the lookout for this one when it drops this year.

That’s all for today! We’re continuing to putter along here, and we’ve made good progress. Stay tuned for more, and stay frosty! Whatever that means!