Echo Location: A bot and a bird

Welcome back to Nintendo Wire’s Echo Location, the series where we voice which Echo Fighters we have our hearts set on for Smash Ultimate! Hot off the announcement of the gorgeous Pro Controller and Special Edition, I’m back to share two more Echo Fighters I’d love to see on my character select screen when Ultimate drops this December.

Last time, Ricky Berg shared his hopes for a new challenger from the street, yet another Fire Emblem character, and an adorable mayor’s assistant. Those were great picks, though they were all a little safe. I’m here today to deliver the riskiest pick of this entire series.

Next time, a new challenger approaches, as Tom Brown steps up to deliver his Echo hopes for the first time. But for now, it’s time for me to show you the character you never knew you needed in Smash Bros.

What started as a joke in my head turned into a real desire for the Smash Ultimate roster. At E3 2014, Nintendo presented a lot of cool games. Smash Bros., Super Mario Maker, even Zelda Wii U.

But don’t forget how Nintendo announced its E3 plans. A five minute YouTube video went up in April of that year revealing the Nintendo Digital Event, the Smash invitational, Nintendo Treehouse, and Smashfest at Best Buy. The star of this video package? None other than Reggie Fils-A-Mech, the robot copy of our beloved Nintendo of America president.

I’m here today to start the campaign for Reggie Fils-A-Mech to enter Smash as a R.O.B. Echo Fighter.

As showcased in the video, Fils-A-Mech has lazer death eyes and super strength. I could easily see some of his special attacks mimicking R.O.B.’s, along with the stiff movement animations for our menacing mech. Since the Fils-A-Mech only appeared in one Nintendo video ever, Sakurai and the team could easily take some liberties in developing his moveset to make him as close to R.O.B. as need be. He also has a weakness to water and an ability called Fils-A-Vision, which I would love to see incorporated.

Just imagine a roboticized version of Reggie swinging his arms in a 360 degree motion against some of Nintendo’s greatest heroes. I’m sure many reading this right now hate this idea, but I would personally love to see it. Call it a joke if you must, but the reaction that would ensue if one of Nintendo’s most recognizable faces made it into Smash would be second to none. Plus — who wouldn’t want a Reggie amiibo on their shelf? Oh, and make his voice sound like the Miitomo voices, just like in the video.

Birdo is a bit of a weird one, as her moveset couldn’t be identical to Yoshi’s, but I think it would be similar enough to classify as an Echo Fighter. She can shoot eggs from her mouth, as seen in Super Mario Bros. 2. This could mimic Yoshi’s up special, where he lobs eggs upwards. Instead of licking up enemies like Yoshi, Birdo would have to suck them up, like she does when fielding in Mario Superstar Baseball. 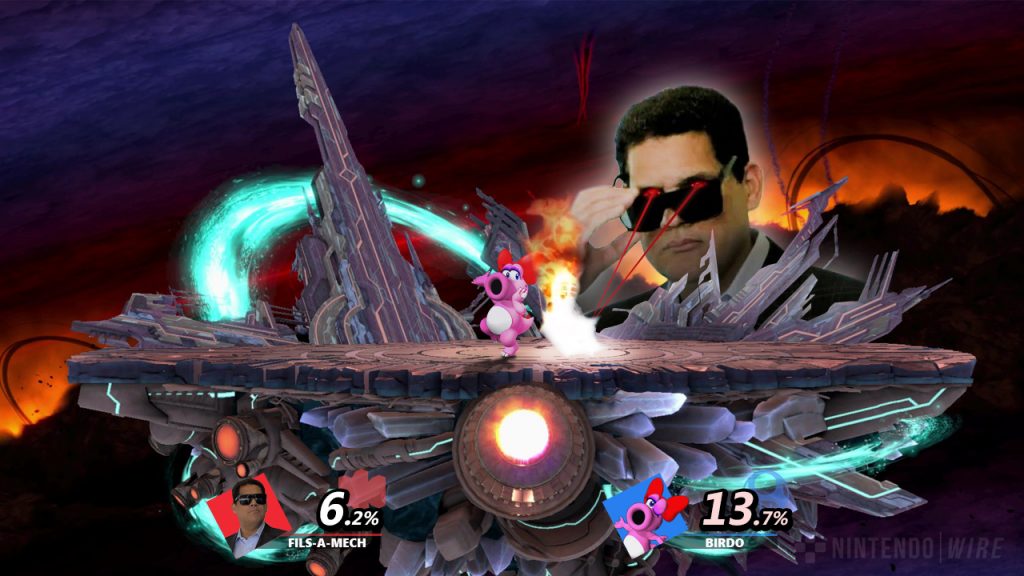 Otherwise, I’m sure Birdo could simply inherit all of Yoshi’s other kicks and punches and pull it off well. We’re not so sure what Birdo has been up to lately, with odd absences in Mario Kart 8 and Mario Party 10. She’ll be appearing in Mario Tennis Aces later this year, but maybe she’s been spending all this time prepping for Smash! Only time will tell.

Those were my next two picks for Super Smash Bros. Ultimate Echo Fighters. Stay tuned for another installment of Nintendo Wire’s echo location later this week!