Welcome back to our coverage of the Octopath Traveler demo! Last time we covered the tales of Ophilia and Primrose, and this time we’re wrapping up the prologues of the eight protagonists as we take a look at our last two stars, the gregarious, genial Alfyn and the astute, stately Cyrus. Let’s dive in!

Alfyn’s story is an innocuous one. He starts off as an apothecary, treating the locals for their ailments with a smile and a pat on the back. After venturing into a cave to procure antitoxin for his best friend’s little sister, he thinks back to why he became a medic in the first place and ponders becoming a journeyman. With encouragement and confidence instilled in him by his fellow pharmacist in training, Alfyn sets out to help the needy across the continent — another setup that is far from epic in scope, which only helps to make the motivations and character feel genuine and personal. 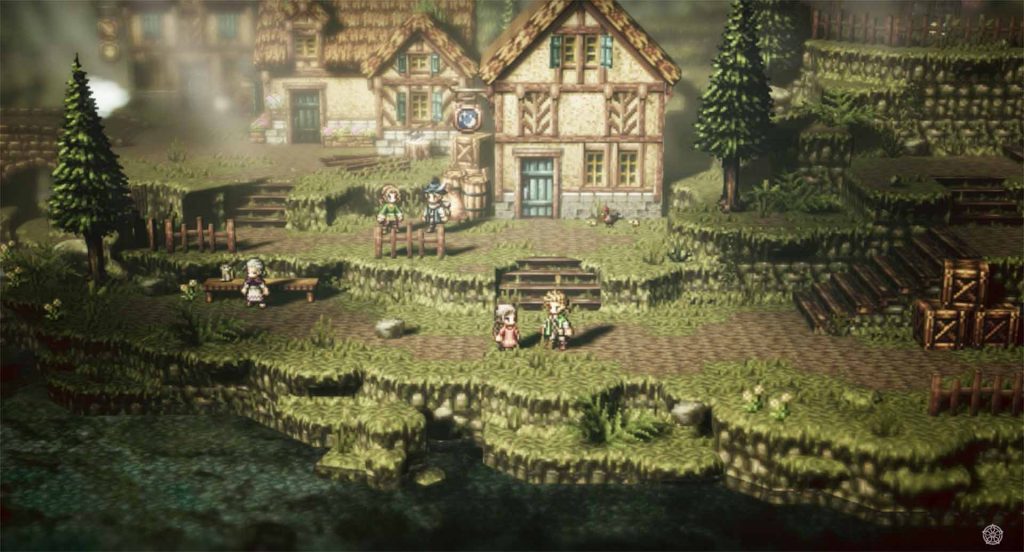 I’ve been remiss, because I’ve somehow made it to the last part of this preview series without mentioning the game’s excellent score. To me, music is as important to a JRPG as solid mechanics or a good story, and Octopath Traveler doesn’t disappoint — with a variety of bright, airy tunes that match the traditional and classic feel that the game is going for, it is a constant pleasure for the ears. While it lacks, say, the rocking intensity of Bravely Default, it makes up for it with a grandiosity that imbues every scene with the proper amount of emotion.

Alfyn’s path action is a long-standing tool in the JPRG character’s kit: talking to people. He can make inquiries with townspeople to find out a variety of information, which most of the time manifests as finding a hidden item location, but can also branch into a variety of effects (like lowering inn/shop prices or expanding the armory’s inventory). It’s probably the most basic of the options available in the game, though each inquiry comes with a helpful dosage of flavor text to help flesh out the world. 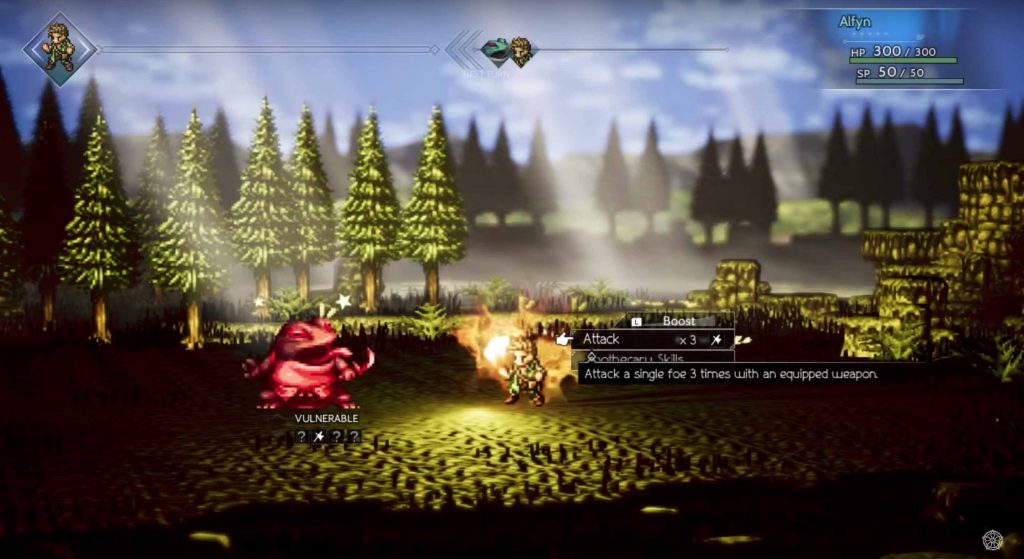 In battle, Alfyn acts similarly to the classic Final Fantasy chemist job, with the ability to mix ingredients together for a variety of effects. Unlike the traditional chemist, his items are not based on your normal repertoire of consumables but their own class of ingredients with more clearly outlined effects. (Mixing together an antitoxin and a small curative heals you a little and cures poison, for example.) The system appears not only more flexible than the usual chemistry, but also a little less broken, as instead of it being a matter of mixtures being obtuse and requiring a guide (which inevitably tell you the most overpowered combos from the get-go), you’re limited by your ingredients, which will always have a use no matter how they’re mixed. Of course, this kind of job usually shines late in the game, so it’ll be interesting to see how it holds up then.

Cyrus’s tale was one of the more multifaceted I’d come across. As a premier instructor in a prestigious college, Cyrus is the object of admiration (and attraction) for his students. In the process of solving the missing whereabouts of a book from the library, he butts heads with the headmaster, who — upon receiving a false tale of misconduct from a student — sends Cyrus away on sabbatical. Never to be deterred, Cyrus uses the opportunity to begin searching for a mysterious tome that was stolen from the library 15 years ago, sparking his journey for answers. There’s a lot more details than that, but the focus on mystery solving and intrigue makes the first leg of this story a fascinating one. 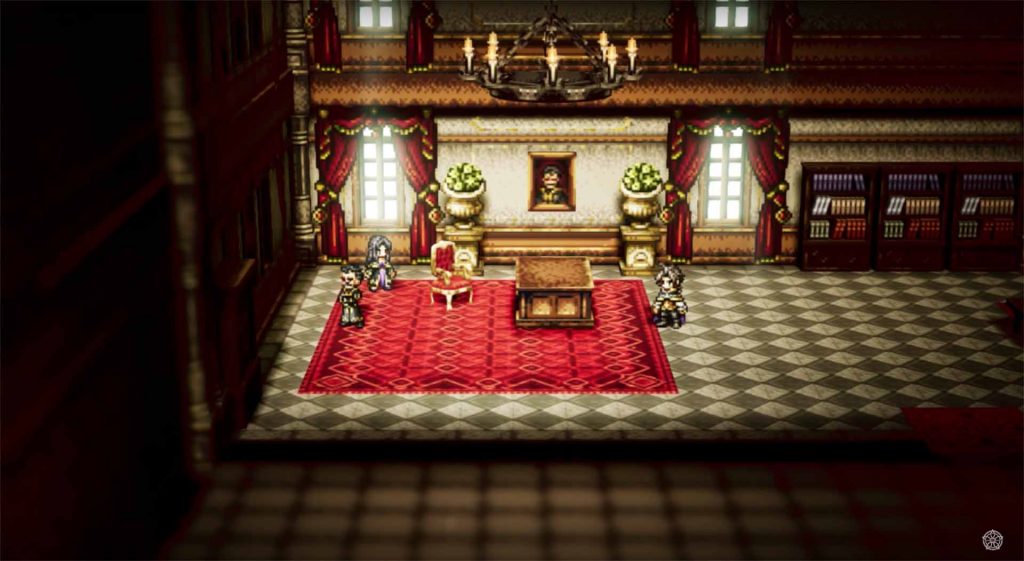 Cyrus’ path action, scrutinization, is reciprocal to Alfyn’s, not relying on levels but instead on chance to find information. There was also a short segment unlike in Alfyn’s where Cyrus pieced together his gathered info in order to make deductions, which is something that I hope continues on into the later parts of his story. However, the lack of a shown success rate for his action does make me concerned about accidentally scrutinizing at the wrong opportunity — though it does increase the element of risk at the same time.

In battle, Cyrus fits the black mage archetype, mixed with a little bit of FFIII’s scholar. He can use multi-targeting fire, ice, and thunder spells for damage, and has the ability to uncover enemy weaknesses upon starting battle (or with a later ability). He doesn’t really have any other tricks like summoning — he’s a magic-focused character through and through. It’s a bit stock for the last character we’re covering, but alas. 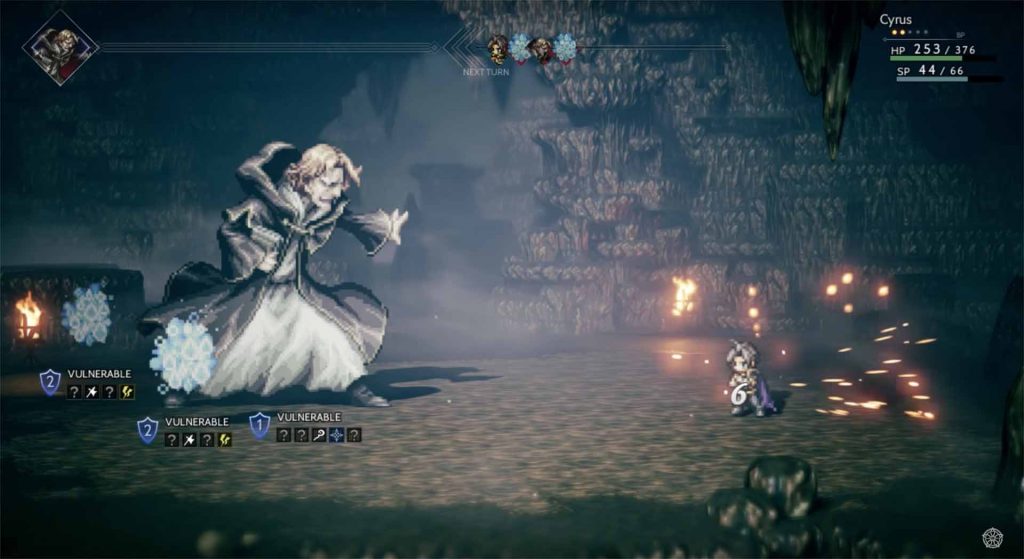 The end of the beginning

Eight prologues later, eight stories begun, and I feel as if I’ve barely even started to grasp what potential Octopath Traveler holds. Each and every one of the tales is compelling in its own way, and stands on its own merits, which is more than I thought when I started — I assumed there would be one or two duds along the way, but as it stands I’m interested in seeing every path unfold.

If there was one concern — one big, gnawing question — it’s that of cohesion. How will these characters coalesce? Will they simply follow their stories mostly independent of each other, with little in the way of party interaction? On a certain level that’s probably inevitable, given how freeform in structure the game is, but I would end up being a little disappointed if there wasn’t a cohesive center to the game’s narrative. But even if there isn’t, I have some faith that the end product will still be engrossing.

Octopath Traveler releases on July 13th. You can pick up the demo — whose save data will carry over into the main game — in the eShop right now for free. And if you’re looking for even more Octopath content, check out the other pieces in our impressions series!