Welcome back to our series of Octopath Traveler impressions! Last time we dove into the tales of the muscular H’aanit and Olberic, still enjoying the game greatly while starting to pick up on some little flaws. This time we’ll be examining some of the fairer members of the cast, as we cover the stories of the genial cleric Ophilia and the vengeful dancer Primrose. Let’s take a look, shall we?

Ophilia’s tale is the most somber to date, and perhaps my favorite of what I’ve played so far. Set in a quiet and snowy land, Ophilia is set to see her adoptive sister, Lianna, off on a quest known as the Kindling — but when her foster father is stricken ill, and Lianna is paralyzed with fear of leaving his side in his darkest hour, Ophilia takes on the quest of her own volition, leaving the blood relatives to care for each other as she shoulders their burden. It’s a sweet and tender opening that actually left me a little emotional. 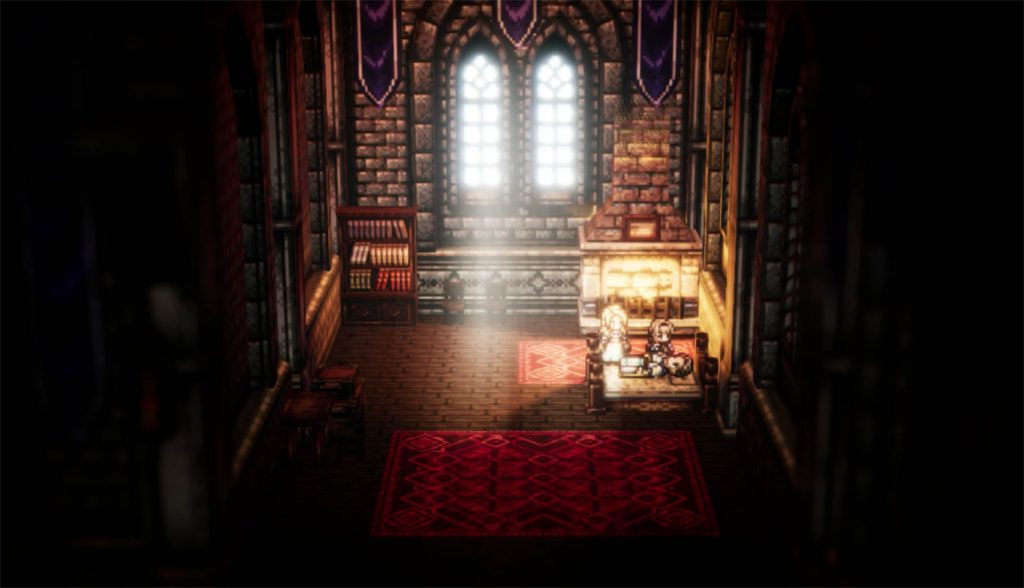 I briefly touched on the game’s voice acting last time, but I think it needs to be highlighted more — so far, Octopath Traveler has some stellar voice work, and this story did a great job of showcasing that. Ophilia herself is voiced by a personal favorite, Cristina Valenzuela, who instills her lilting softness with an earnesty and sincerity that silent dialogue wouldn’t be able to impart. The other VAs offer great performances too, and elevate what could be a dry premise into a surprisingly touching setup.

As you might expect from her station, Ophilia is the archetypal White Mage when it comes to combat — she can bonk an enemy with her staff for little damage and wearing down their Break meter, but the bulk of her usefulness comes with curative spells and light magic, which make her durable and deadly. She’s the most magically inclined of all characters I’ve played thus far, which made handling her by her lonesome fairly difficult at first — I imagine she’ll shine more in a larger party. 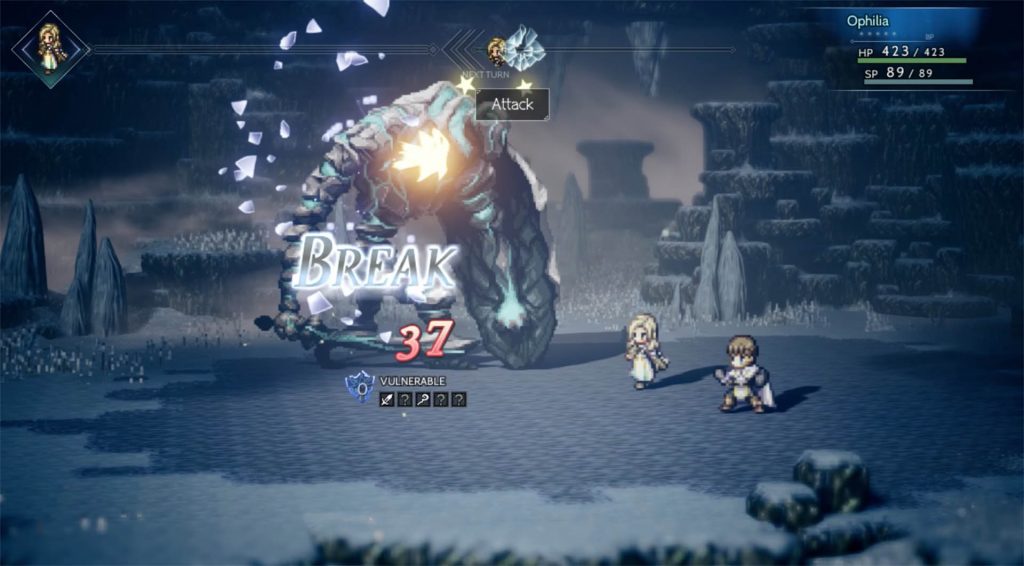 Her solo woes were alleviated greatly by her path action, Guidance. Ophilia can pick a townsperson (assuming her level is high enough) and have them follow her. They can then be summoned in battle, where they’ll appear for a few turns and commit certain actions depending on the NPC (some have sword skills; others, spears, etc.). This method allows her to utilize more physical heavy units when needed — though they can’t be used as meat shields, so she’ll have to watch her health. Still, it’s a nice way of keeping her more passive nature intact in gameplay while still making her a good party member.

Primrose’s tale was included in the first demo of the game released way back when, and I loved it back then too. After watching her father get murdered before her eyes as a child, Primrose clings to the single thing she could identify the killers by — the mark of the crow — and grows up to be a dancer in the one place she’s heard rumor of them. With vengeance squarely in mind, she is prepared to do anything to find the murderers and enact justice. The story is probably the most mature of the ones featured thus far, with lots of adult implications and heavy subject matter that make it more engrossing than your usual JRPG fare. 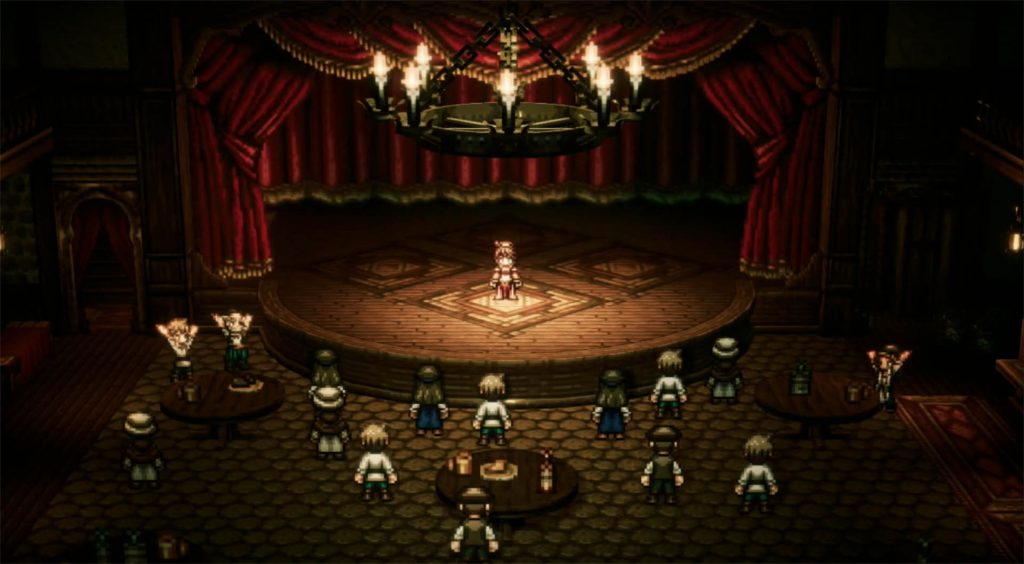 Again, the voice acting is fantastic. Laura Post at Primrose manages to sound both reserved and determined in equal accord, and whoever voices her master Helgenish is superbly slimy. (Every time he utters the word “kitten” I want to hurl.) Indeed, the voice work is so good that I can’t help but be disappointed that there isn’t more of it. While the most important cutscenes have full voice acting, the bits in between have only blurbs spoken, which is a bit of a letdown. It obviously would have been a much bigger undertaking, but games like Fire Emblem Echoes have shown just how valuable going the extra mile can go. So long as there’s still a significant amount in the full game I’ll be more than content, but I would be sorely upset to see the amount of fully voiced scenes drop off after the prologues.

Primrose, like Ophilia, is not really suited for solo bouts, wielding but one type of weapon (daggers) and magic (Dark). Unlike the cleric and her heals, however, Primrose follows in the JRPG bardic tradition of giving buffs to herself and allies, able to impart basic boosts to physical attack, elemental attack, and so on. While difficult to set up by her lonesome, I can only imagine the sort of souped-up units you can make once you get the group play going. 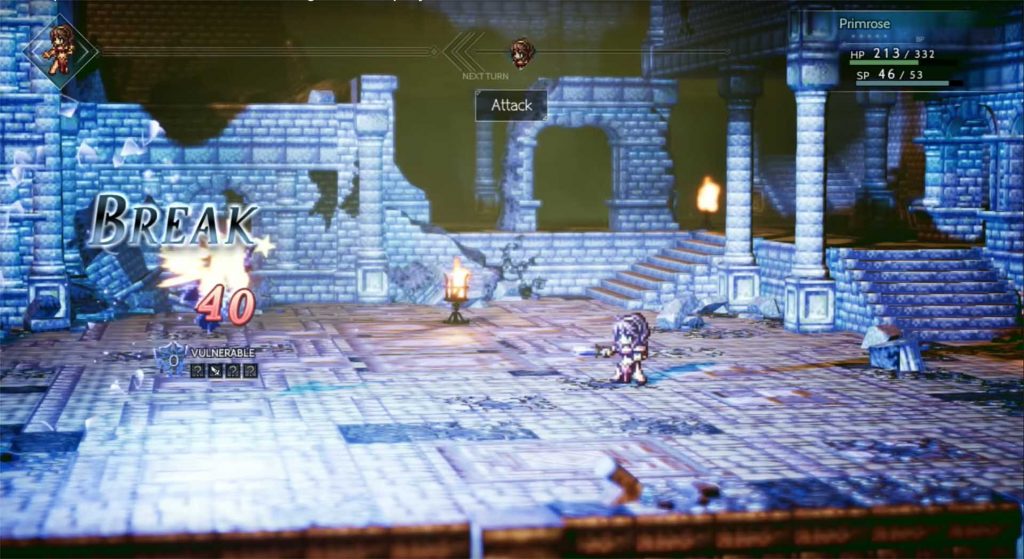 Primrose also wields the same Summon ability as Ophilia, though her path action, alluring, is based off of RNG rather than strict level (like Therion’s Thievery, your reputation will suffer should you fail the dice roll). It feels a little disappointing to see the exact same battle command on two characters, but given their different jobs in battle I imagine it won’t be too great a loss in the long run. I also foresee there being some interesting plays you can make with two summoners, too.

We’ve still got two last characters to take a look at, so join us soon for our wrap-up of the Octopath Traveler demo impressions, when we take a look at Alfyn and Cyrus! Remember that you can download the demo in the eShop, and pick up the game for yourself come July 13th. Until next time!