When I was growing up in the ‘90s, I was part of a pretty Nintendo-centric family. I grew up on the SNES, N64, and the Game Boy, but my nextdoor neighbor’s family had a PlayStation. We’d gather in his basement frequently and play two games: Tekken 3 and Crash Bandicoot. Eventually, my dad ended up buying a PlayStation 2, and at every chance I got I would take advantage of the console’s backwards compatibility to play Crash Bandicoot 3: Warped. In the early days of 3D platforming, Crash easily could have been seen as Sony’s answer to Mario. Though not as expansive or open as Super Mario 64 was, Crash Bandicoot cemented itself in my memory alongside Mario, and now, over 20 years later, those original Crash Bandicoot games I loved have finally come to Nintendo’s turf.

Crash Bandicoot: N. Sane Trilogy is a full and faithful remake of the first three games that Crash Bandicoot starred in, right down to the sometimes-frustrating necessity for pixel-perfect jumps. The original trilogy has been recreated from the ground up to play entirely like the original, with all of the quirks intact. Playing with a control stick feels pretty clunky, but these games were designed with the PlayStation’s D-pad in mind, so I often found myself gravitating back to the D-pad on my Joy Cons. Playing a 3D platformer with a D-pad feels a little strange in this day and age, but I can’t deny that many levels and boss fights felt much, much better this way. 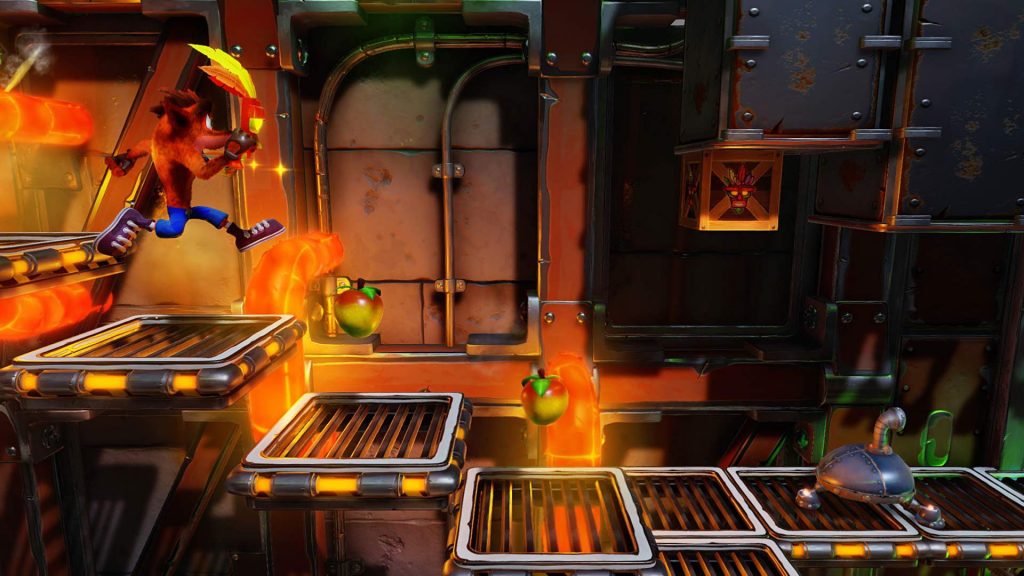 Coming off of playing Hollow Knight, where jump timing is determined by how long you hold down the jump button, for almost a week straight, and then going into the tricky and short jumps of Crash, felt extremely jarring at first. I found myself watching Crash’s shoes fly into the air from the bottom of a pit more often than I’d have liked in the first hour or so. After I got into the groove though, I was taken up by the nostalgia of it all, thinking back to those days in my neighbor’s basement, and enjoyed my time with the game immensely. This is the main reason why I’m not bothered one bit by the fact that the controls and movement mechanics were left wholly intact from the original PlayStation releases — these games play just like they did when I was five years old, and in this case that’s a very good thing.

Appearance-wise, this game looks incredible on the Switch. Yes, there are other consoles where this game presents better, and it’s now even available in 4K, but for what it is on the Switch, I’m not complaining one bit. The game looks very “soft” without any noticeable jagged edges, which is overall a good thing. The environments are incredibly detailed for how simple the actual level design is. The animations for Crash and Coco’s expressions and movement are exaggerated and beautiful and fit with the tone set by the series all those years ago. There are certain characters that look a little weird in cutscenes due to the effort to texture them for a console with less graphical power, but it doesn’t take away from the experience, and in a side-by-side comparison some of the Switch’s textures look even better, stylistically, than they do on PS4. The game is locked at 30 frames per second in docked and handheld mode, but it wasn’t something that bothered me at all, as it’s barely noticeable. 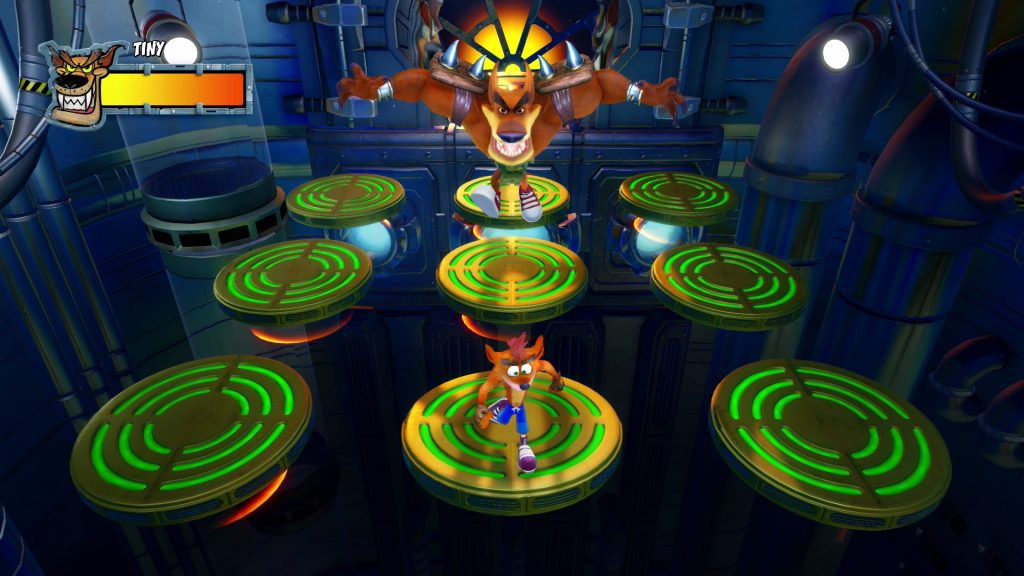 Despite having been created more than 20 years ago, these three games were designed perfectly for the Switch’s portability. The quick and simple level design makes it easy to pull out your Switch and knock out a level or two. They’re not text or voice-heavy, so even out in public if you just wanted to get your Crash fix while waiting for the bus, you could. I’ve spent the majority of my time with the N. Sane Trilogy on Switch in handheld mode and haven’t encountered any problems with playing it this way — in a lot of cases the game looks even softer in handheld mode than up on my TV, and I didn’t notice any drop in frame rate either. Loading times are, thankfully, not long at all. This was a big worry of mine, and is honestly a concern of mine for almost every non-first party title on Switch. I was instinctually counting the seconds for the loading screen at first, but found myself having to stop before I hit two seconds almost every time.

There are also two levels not found by any official means in the original games. The first is an originally-cut level from the first game, titled “Stormy Ascent,” it’s pretty hard but satisfying to play, and completing it will actually boost the completion percentage of Crash Bandicoot to 105% as well as bring your total Gem count to 27/26. Second is a brand new level created for the third game, Crash Bandicoot 3: Warped. Titled “Future Tense,” the stage is entirely new to the series, and was unavailable before the launch of the N. Sane Trilogy on Switch, PC, and Xbox One.

As far as sounds and music are concerned, all of the nostalgia-inducing tracks and effects are there, from the classic Thumpin’ Wumpa Islands soundtrack to Crash’s iconic spin-noise. I did notice that overall, the sound mix seemed rather quiet all the way through. I felt that I had to turn my Switch’s volume up pretty loud compared to other games when played in handheld mode. The voices were especially quiet during cutscenes compared to the rest of the soundscape, even in TV mode, which was made even worse by the fact that there’s no option for subtitles. 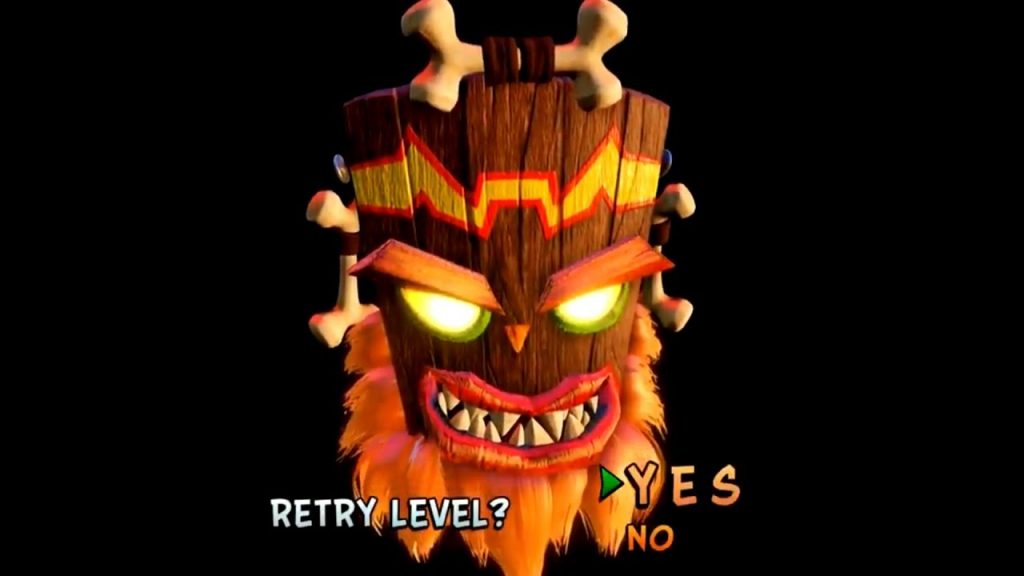 I do want to give special mention to Uka Uka’s “Game Over” voice, which is too fantastic. I found myself looking forward to hearing it when I knew I was about to get the Game Over, and even doing my best to mimic it out loud to keep my own spirits up when faced with Game Overs from particularly difficult levels.

Despite the availability on other consoles, the Switch is definitely my preferred platform for Crash Bandicoot: N. Sane Trilogy. If I’m being completely honest, I believe that in the trade-off of graphics for portability, portability will win almost every time, especially with the quick and simple level design that Crash has. It’s easy to pull out and play, and though “hardcore” gamers may refer to it as the inferior version, the drawbacks are clearly minimal when you factor in the portability. The nostalgia of these beloved games from my childhood was entirely preserved while giving Crash a huge upgrade in terms of visuals, not to mention the two extra levels added to the trilogy, and I’ll be enjoying this collection for a long time to come. 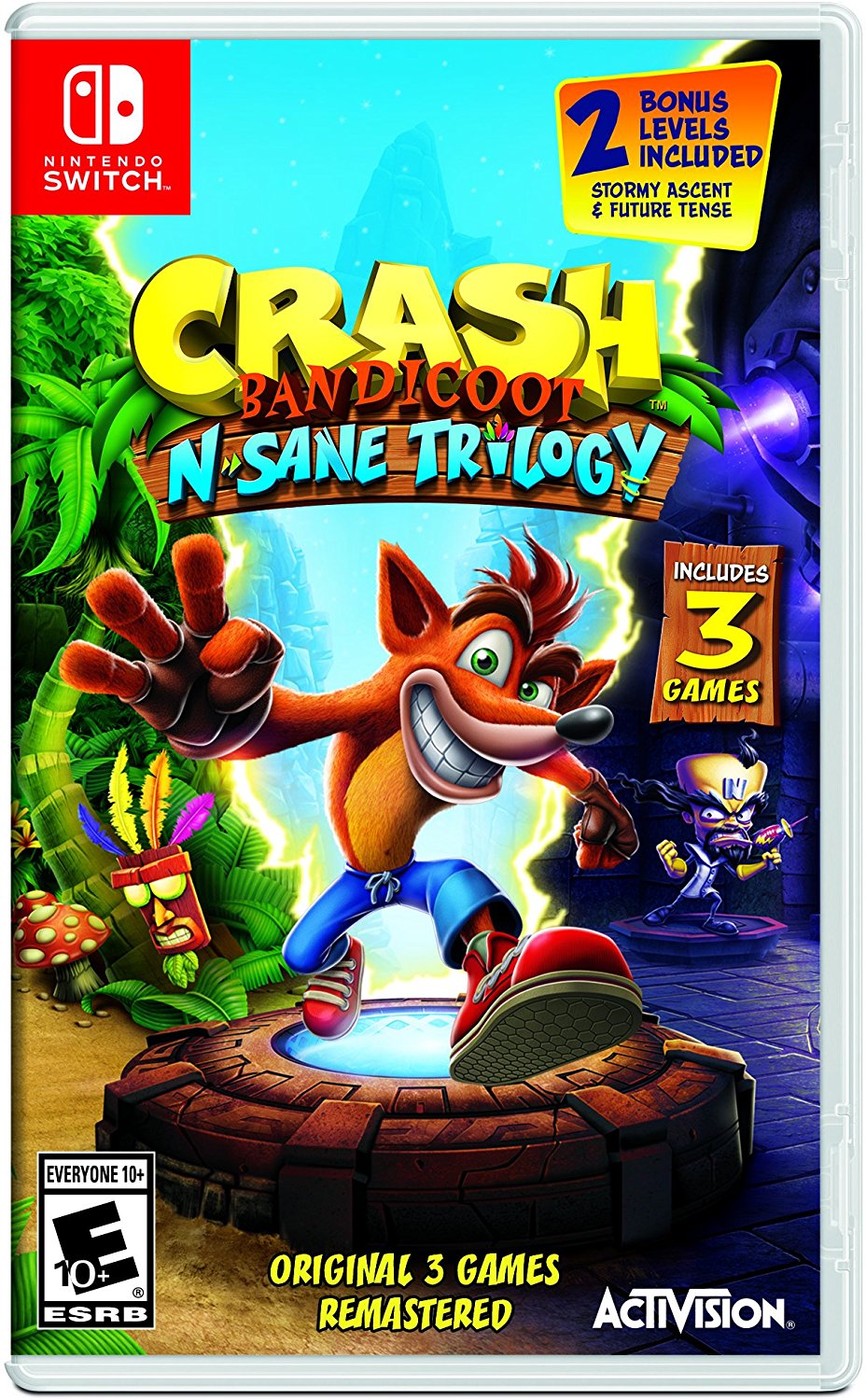