After our deep-dive behind the scenes of our Breath of the Wild de-make a few weeks ago, I’m here again to discuss the process behind the recent Super Smash Bros. followup! If you haven’t already seen it, give it a watch below, then continue on for the full breakdown.

Coming off the Breath of the Wild video I wanted to do something a bit more experimental, conceptual, and in-depth, with more colors and animation. Super Smash Bros. was a prime candidate given how the Switch version’s full reveal is just a few weeks away — and the platform of choice? The SNES. With music from Carlo Nassar and box-art commissioned from Rincs, everything was good to go.

One of the first decisions I made early on was to make the game look like it could have been made in the mid ’90s. This is reflected in the character select screen, which notably omits Pokémon (who had yet to really be invented) and includes the likes of Lip from Panel de Pon, after she was suggested by Nintendo Wire’s own Ricky Berg. She’s a perfect fit, in my opinion, since it’d retroactively explain that, while she wouldn’t appear in later games, the Lip’s Stick item would continue her legacy. 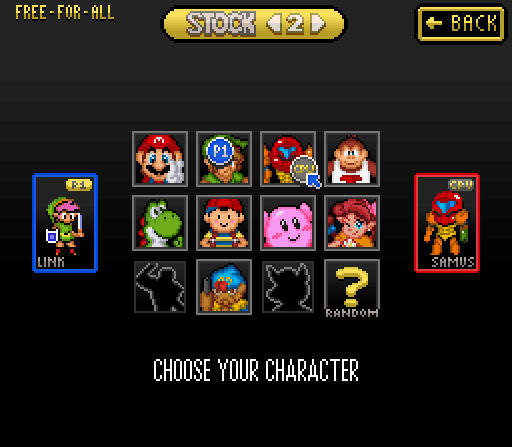 The only character who slightly throws off this hypothetical release window is Geno, who wouldn’t appear till 1996’s Super Mario RPG. I wanted him to be in though, so I ultimately decided he’d be similar to Roy, who made his first appearance in Melee before the Japanese release of his respective Fire Emblem game.

Also, as a little easter egg, the alternate colors that cycle for Link are from Link to the Past’s different upgraded tunics and swords, plus his iconic bunny form.

Samus also appears for a couple of frames as the cursor is dragged over her icon, while DK Jr. is there instead of Donkey Kong, reflecting Super Mario Kart.

It’s worth noting at this point that the game is depicted as being two-player, and that’s deliberate. The SNES only had two controller ports after all, and while the Multi Tap was available, I like to think Nintendo would keep it simple.

Continuing this mid ’90s setting theme there’s the stage select, which I filled with little references. 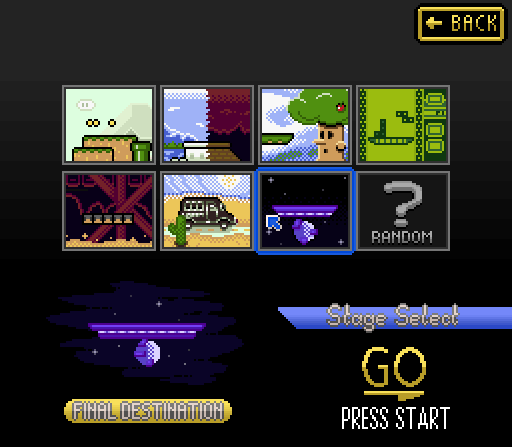 Final Destination was picked as the stage depicted in the battle itself thanks to its relative simplicity and the fact it’s easily recognizable among Smash fans. It mostly takes cues from the N64 version, as do the menus themselves, but I gave it its own spin.

Now for the most in-depth part: Link and Kirby’s moves. I didn’t just want to translate their Nintendo 64 versions, instead sprinkling in some SNES flavor. In Link’s case, this mostly means the Pegasus Boots finisher, which would take the place of his Boomerang Side-Special. This was mostly inspired by the Linkle’s Boots weapon in Hyrule Warriors, which makes them seem like the perfect charge attack in Smash. 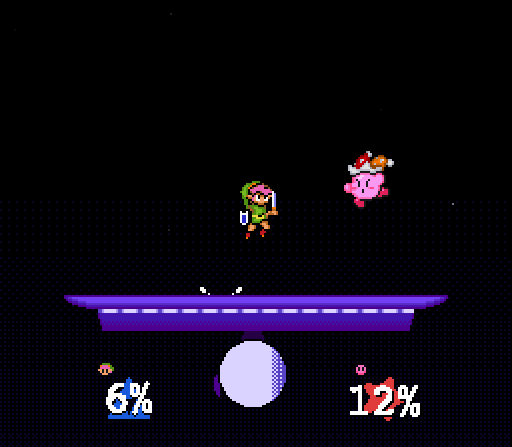 I took a few more liberties with Kirby. Deciding against giving him the ability to copy abilities from fellow fighters, I instead equip him with a bunch of different hats from Kirby Super Star. There’s the jet that would work as a quick Up-Special; Beam which would replace his standard Special; and Cutter, the Side-Special. At the end of the video, before he gets punted off the screen, I decided to have him charge up a normal Smash attack, which unfortunately gets cut off by the Pegasus charge.

Then there’s the Results Screen that takes advantage of the Mode-7 capabilities of the SNES — for a more dramatic effect. Link’s victory music here is the jingle he gets when he picks up the Master Sword in Link to the Past, while the animation is inspired by obtaining the Triforce in that game. 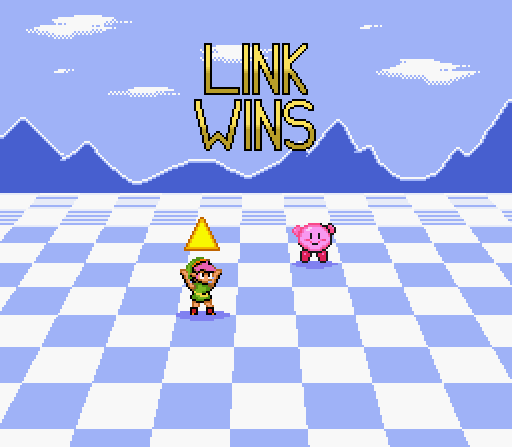 So that’s the rundown of the Super Smash Bros. de-make! Be sure to check out Rincs Art and Carlo Nassar for more of their great content, and our Patreon for access to all the unfiltered sprites.

I leave you with this tease for the next video, which should hopefully be out before E3…