Behind the scenes: Breath of the Wild de-make

Earlier this week, we started a new video series on our YouTube channel, themed around visually de-making popular video game franchises for older pieces of hardware. Our first installment was The Legend of Zelda: Breath of the Wild for the Game Boy Color, which you can check out below:

I’m Tom Brown, @Rotobit on Twitter, and I worked on the pixel art and animation seen in the video. After seeing how many people have checked it out (seriously, it’s still hard to process how many views it’s gotten,) I’ve decided to give a behind-the-scenes look at the process. First things first, though, I want to give props to the musicians whose tracks appear in the video — be sure to click through to mWind’s Main Theme and eebrozgi’s Shrine Theme!

The Game Boy Color is the system I have the most nostalgia for. After picking one up as a kid thanks to Pokémon, it introduced me to practically all of the major Nintendo franchises, and as a result, I’ve become incredibly fond of its aesthetics, from the translucent Atomic Purple shell to the limited, but charming, color palettes. Link’s Awakening DX was one of the first Zelda games I really got into, and it, along with the Oracle games, were my main sources of inspiration for the de-make.

That said, I tried to make almost every asset original, only taking basic design cues from those games. Link is perhaps the most in-line with the original sprites, though I had to swap out the hat for a pony-tail, but things like the trees and Shrine were made from scratch. 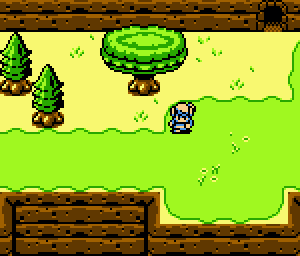 I also had to take into account color limitations. If you look at most any Game Boy sprite you’ll see it has just three colors making up its body, meaning the artists had to be very creative when it comes to portraying detail and shading, something NES developers also had to keep in mind years prior. There are some exceptions to this rule that display more than three colors, which I replicated with the Shrine, and on official hardware this would be accomplished by overlaying two or more different sprites onto the same position.

There are even more design and hardware quirks I had to keep in mind when making the video, which I tried to replicate when I could, from the staggered fades to the area transitions.

We should also talk resolution. The Game Boy screen has always been 160 pixels wide and 144 pixels tall, divided up into 16 x 16 pixel squares. This is why there are noticeable tiles, with most every sprite being made to fit inside these little boxes. In my video there are only a few exceptions to this rule, like the trees and shrine, but even still these were crafted in such a way that tiles wouldn’t be able to intersect unless they were an interactive “object.”

The little gameplay details are something I really focused on, too. Just plonking Breath of the Wild elements in Link’s Awakening wouldn’t work; I wanted to ensure the design ethos of the former still shined through. The Great Plateau “tutorial” section is intact, Link is able to jump from the very beginning, and the Sheikah Slate would quickly unlock three runes. While these weren’t shown in action during the video, I included Bomb, Magnesis and Stasis, only omitting the ability to freeze. These would function more as puzzle solving tools rather than the zany physics manipulators of the real game, but would still let the player explore all of Hyrule once they left the Plateau, something I think is essential.

Speaking of Hyrule I also spent a bit too long minimizing the massive map into a grid-based system as seen in the Game Boy games. Almost every major location is represented, with the only significant, conscious change being the swapped positions of Hyrule Castle and the Great Plateau. The reason? The intro cutscene had to make logical sense, of course. 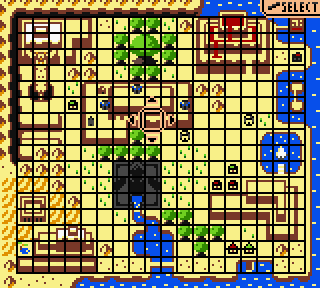 You can check out clear PNG files of the sprites via our Patreon, which offers up even more Nintendo Wire content, so it’s definitely worth checking out. Another de-make will be released in the near future — and here’s a tease to tide you over…