It’s no secret that Celeste has quickly captured our hearts as one of the best games 2018 has to offer — and we’re only in January! At the heart of its relatable tale of fear, self-doubt and knowing your worth lies one of the most satisfying endeavors in pixel perfect platforming since Super Meat Boy clogged up its players’ arteries way back in 2010. As anyone familiar with the genre might expect, the game’s chock-full of hidden pathways, collectibles and secrets just begging to be uncovered, with one elusive easter egg in particular catching our attention — a secret developer room accessible by only the mightiest of mountaineers. 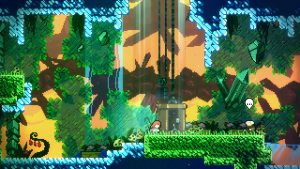 In order to gain entry, you’ll need to have first advanced the story to Chapter 6. Once you’ve roughly reached the halfway point, you’ll find the mountain’s resident granny guffawing by a busted down elevator. (If you’ve already beaten the chapter, simply skip to the checkpoint titled ‘Reflections’ and you’ll start right where you need to be). Unfortunately, it’s busted (typical), so you’ll have to rely on a little platforming prowess to reach the secluded room above. To start your ascent, simply air dash straight up and cling to the hanging rock face on the right, then leap around the tiny slant.

This is where things get a bit tricky. You’ll need the help of a couple advanced techniques to scale the crystal-clad cliffs in question, more specifically boosted jumps and wall kicks. By harnessing the momentum of Madeline’s dash just right, you should be able to kick off that first naked ledge and barely gain enough height to reach the second. From there you’ll want to work your way to the right side of the cliff, eventually jumping through an invisible passageway. From here, take a much deserved breather, then one final leap of faith (boost jump and air dash) through a second invisible wall. Don’t forget to pat yourself on the back when all is said and done.

(Alternatively, you can bypass the the initial boost jumping wall kick by carefully clinging and hopping between the crystals on the right, though we found it to be a much more cumbersome and deadly route that rarely worked in our favor).

Once successful, you’ll be greeted by various characters spanning the rich history of developer Matt Makes Games — some dating as far back as 2004! 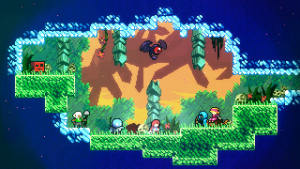 From left to right: Ogma from Jumper, Névoa from Skytorn, Yuri from Out There Somewhere and both Blue and Pink archers from Towerfall Ascension. Don’t forget the ever elusive Eyebat floating up top!

And there you have it! Sadly, the characters themselves leave much to desire in way of conversation, nor is there a fancy collectible to snag and brag about for all the world to gawk over. Still, you can rest your head easy knowing you’re one of the few daring enough to overcome this most elusive of platforming perils.