A few more old Nintendo themed photos have been added to this week’s collection showing up on Twitter. Nibellion posted the following scans from a newspaper possibly based in the Netherlands. The Dutch text is the only clue to its origin and Nibellion states it’s from 1994: 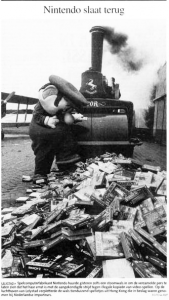 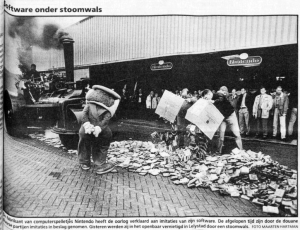 Twitter user ItTimmit, along with a few others, chimed in on what some of the text reads. Essentially, Mario, a steamroller, and Nintendo employees are destroying bootleg Game Boy games and maybe some other Nintendo products. The image quality isn’t great, which is compounded by the fact that newspapers utilize a low printing resolution. The photos are from 1994, even though it looks like they could be “closer in age” to the photo of Nintendo headquarters from 1890 that appeared earlier this week.

We’ve played around with the images in Photoshop to get a better look. If you’re an expert at Game Boy box art, you can take a few guesses as what bootleg versions made it into the pile.

What do you think of these new pictures?