I’m a huge fan of indie games that attempt to replicate a beloved series or genres. Games like Planet Freedom or Yooka-Laylee reflect the feeling of a bygone era for fans who want to relive some of their favorite, yet obsolete experiences. Other indie games, like Skullgirls, are made by fans of a type of game who think they can add something to the formula. Brawlout tries to fit in that second category as a game by and for Super Smash Bros. players, but doesn’t fully succeed in finding its own place in the world. Still, I did find some joy in the game’s fast-paced action.

Brawlout is as close as you can get to a Smash Bros. game without having Nintendo characters. It’s a one to four player “party fighting game” that puts characters on floating platforms to duke it out. Attacking adds percentage damage to the recipient, which makes them fly farther away until they fall out of the screen. Again, if you’ve played a Smash game, you know what to expect.

The characters all have normal and special attacks. They can also jump, run, dodge, wavedash, air dash, tech roll and ledge grab. You’ll note, however, they cannot shield or throw opponents. More on that later though.

And… that’s it. At launch, the game has eight distinct characters. They all play differently, but not quite as differently as you might want with such a limited cast. There’s no real zoner who keeps people out with projectiles, like Samus or Villager. They all have their fun moves and techniques, but the moveset in Brawlout is much more limited than Smash’s. 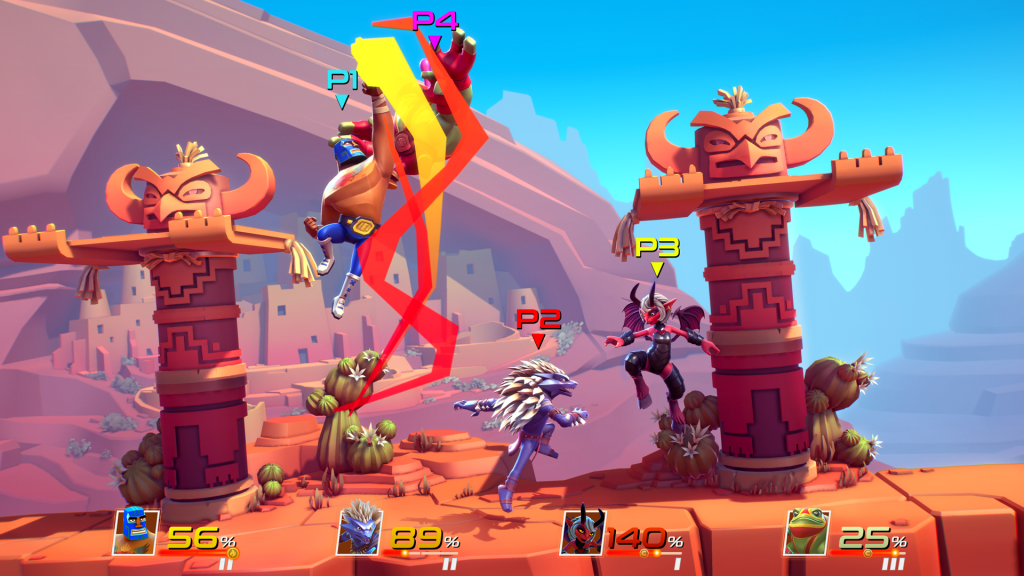 Eight certainly is a low number of characters for a fighting game. I imagine the developers want to add more in the future, and if they do so regularly, I may revisit the review, but the game feels limited with its small roster at launch.

The gameplay of Brawlout is almost identical to Super Smash Bros. The game’s speed feels slightly faster than Smash 4’s and slightly slower than Melee’s. If you can’t already tell by the inclusion of wavedashing, this is a game made for competitive Smash players. There are no items, no real stage hazards, and lots of customizable options to tweak for whatever ruleset your tournament wants to run.

I’m going to admit this though: I don’t know how the Smash community will latch onto the title, mainly because of the things the game doesn’t have. Probably the biggest miss, in my opinion, is that you can’t guard. Pressing the L or R button with a direction does a roll, while pressing the button alone does a “spot dodge,” similar to pressing down and Shield in Smash. So that means your only defensive options are dodges that leave you open if timed incorrectly. Defense is always an important part of fighting games, and removing the most fundamental aspect — blocking — means the game becomes “who has the most oppressive offense.” The game also doesn’t have universal throws. Only Paco and Juan have throw attacks. This isn’t as big of a letdown as throes are less important when there’s no guarding, but it still limits your options in a fight. 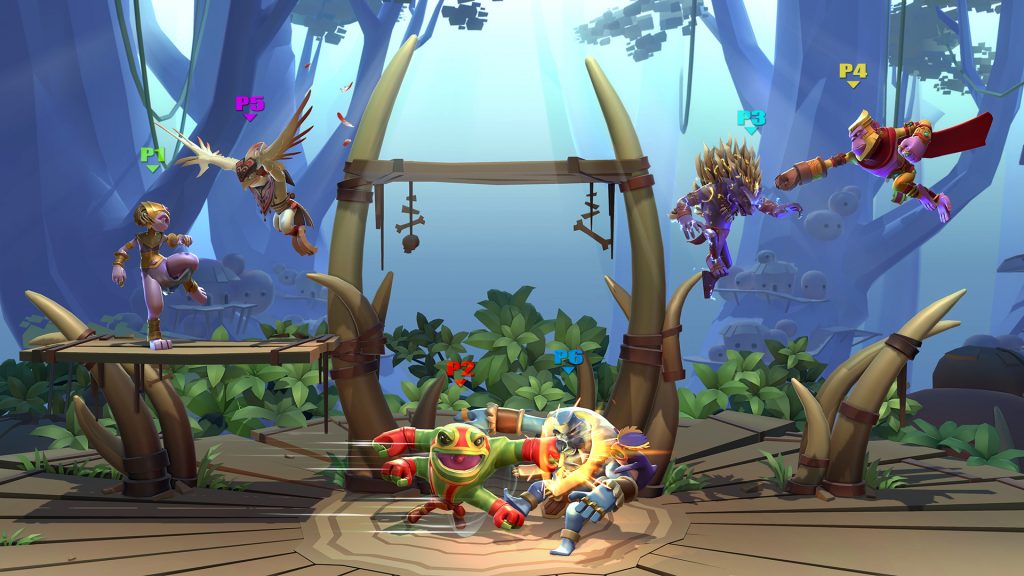 The moves that are in the game are still a little less than what I would like. Characters all have aerial attacks, jab combos, running attacks and “Smash” attacks. With a few exceptions, characters do not have tilt attacks, which, again, limits your options for fighting. The specials in the game range from fun and unique, like Apu’s down-special chain slam, to “ripped-straight-from-Smash.” The Drifter straight up has Fox’s blaster, and, yes, he has a reflector — so Fox mains still have their shine. For the most part, the characters feel unique enough, but perhaps not quite as tight and concise as you’d hope from such a small roster.

The gameplay is snappy, with matches lasting shorter than your average Smash game. Comboing is easier, with the game having longer hitstun and harder hitting attacks. Most characters can get a kill around 70-90%. It can be fun figuring out what attacks can open up combos, but, again, having a smaller pool of moves to pull from makes the combos feel much less open. That’s not to say it doesn’t hit all the right notes. The game is loaded with meteor smashes, and it’s always satisfying to slam an opponent back down into the abyss. Winning in Brawlout feels just as good as it does in Smash Bros.; it’s just more limited in its path to victory.

One of the few new mechanics the game introduced is the rage meter. As you attack and take damage, a bar fills up. When it’s halfway full, you can press L and R to do a Rage Burst, similar to a burst in Guilty Gear or Blazblue, that will stop you in midair from sailing away and knock back opponents, ending their combo. If you wait until it’s full, you can enter Rage Mode, which increases your damage output and reduces the knockbsck you receive. I do like the idea of a burst in a Smash-type game and would like to see if expanded upon.

In terms of modes, it’s pretty straightforward. You can fight locally, online or against computers, either in single matches or in an arcade mode. I played some local multiplayer, and it’s as fun as playing a party fighting game should be with people. I only managed to find one online match during the review period, and it ran better than expected, although some matches had some lag. The game will live or die by its online play, so it may be worth coming back post-launch.

The presentation of Brawlout feels all over the place. The graphics, for an indie game, are fine. The character models aren’t anything to write home about, but the characters are charming and the game has plenty of color. The music is relatively forgettable, and there’s practically no voice acting, which is actually a real shame. Voices would go a long way to give the game some more life. 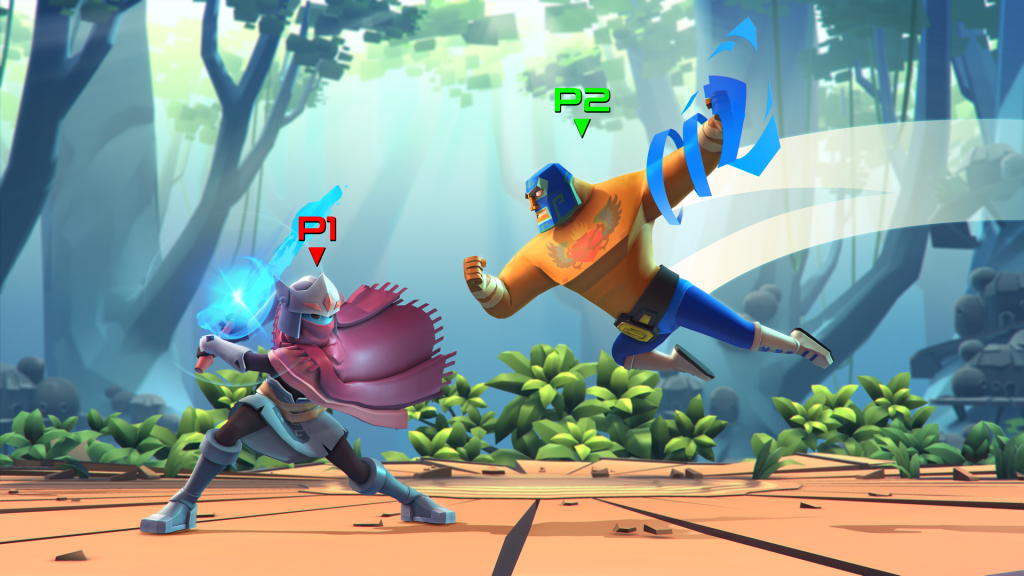 The weirdest choice is Brawlout’s progression system. Rather than unlocking new skins and stages through winning matches, you earn coins and gems, which can be exchanged in a store for “piñatas” that grant random rewards. So what we have is a free-to-play style currency and loot box system in a $20 game that isn’t free and doesn’t have microtransactions. It truly is baffling to hide the majority of stages, as well as new character skins in randomized loot boxes and not charge money for them. It’s obviously better to not be charged money for in-game content, but if you’re going to opt out of utilizing microtransactions, why not just let me unlock a new stage just for beating Arcade mode? Hopefully they address this in the future, because during my entire time playing the game for this review I only unlocked a player icon and some alternate colors for character skins I didn’t have.

The game’s performance also isn’t where it needs to be for a competitive fighting game. About once every round, the game skips frames, which can be the difference between winning and losing in a game this fast. This happens regardless of whether you play with your Switch docked or undocked. Hopefully the developer can patch this sooner rather than later.

Reflecting back, this certainly sounds like a negative review, but I must stress I did enjoy playing the game. It’s fast, provides a solid competitive gaming choice for the Switch and captures the appeal of Smash Bros. well. The characters are charming, and the guest characters are a highlight — hopefully we see more indie fighters in the future (Shovel Knight, please!); however, Brawlout’s successes are Smash Bros.’ successes. The game doesn’t go far enough to make its own mark, and it doesn’t quite match the technical perfection of a Smash game.

I feel that Brawlout will be a success on the Switch, as everyone is hankering for some more Smash Bros. If that’s the case, I hope the developer adds more characters, stages and maybe even attacks to flesh the game out more. Brawlout could have the long, healthy competitive life it so clearly wants; it just needs to give Smash players a reason to pay attention. 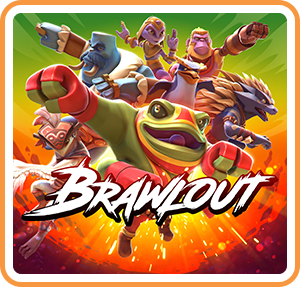