We already got a peek at what’s in store for the world’s first Super Mario Odyssey review via Edge Magazine. We now have our first look at the cover, which considering how spectacular the magazine’s Breath of the Wild issue was in that respect, I had high hopes.

Subscribers won’t be disappointed, with an evocative cover of the Odyssey ship itself front and center. Mario himself is hanging onto the rigging, gazing at the horizon with Cappy overhead. Soaring over the clouds with (presumably) New Donk City far below, it’s full circle from the game’s initial reveal. Mario’s flying off from the first kingdom we saw to travel elsewhere, jumping and laughing the whole way through. 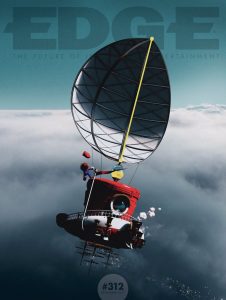 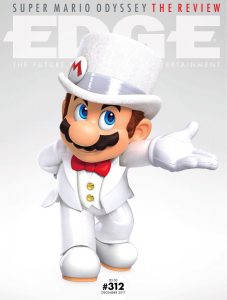 They look to have gone in a different direction for the newsstand variant, using a previously seen and prominent piece of art. In fact, it’s the same one adorning the amiibo packaging on a white background. The simplicity works well visually, and the way Mario’s practically offering you the news that his latest adventure is something special stands out along with it.

It’s only a matter of time before more reviews and coverage start to make their way into the world after this exclusive debut. You can start your own world tour on October 27th.