You can order your copy of Collection of Mana on Amazon today!

I’ll never forget the sense of awe and wonder felt when first booting up Secret of Mana’s superpowered cart back in 1993. Instead of being greeted by the electronic blips and pleasant pings I’d long been accustomed to, my senses were sullied by a deep, ominous bellow of a dying creature’s cry for help I was powerless to stop. As an evocative euphony of somber piano strokes chimed in the distance, the screen eventually faded from black to a lush landscape teeming with life, and in the middle of it all a trio of travelers standing staunchly by a mighty Mana tree towering tall.

Outside maybe Xenoblade Chronicles’ misty-eyed melodies, few games I’ve played since have so powerfully struck an emotional chord within moments of its opening title sequence – long before the single press of a solitary button. It’s just one of the many reasons Secret of Mana holds a permanent plot as my most treasured gaming experience to date, not to mention one of, if not the finest action RPGs to ever grace the game space.

So sharpen your swords and bust out your favorite Elemental as I raise my Flammie Drum high and call upon the many reasons why Secret of Mana’s whimsical world is well worth saving.

Narratively speaking, Secret of Mana is your typical tale of “boy meets sword, boy falls in love with sword, and consequently unleashes an unfathomable evil in dire need of vanquishing” that fans of a certain green-garbed hero can surely relate to. In fact, Mana took more than its fair share of inspiration from the legendary Zelda series as you weed whacked your way through deadly dungeons and perplexing puzzles in search of eight mystical Mana Seeds imbued with the power to save the world.

What Secret’s played-out plot lacked in originality was more than made up for thanks to a laser-focused desire to craft an addictively satisfying action RPG experience. Moving away from traditional turn-based roots established by the first three flagship Final Fantasy titles, Secret was largely built with accessibility in mind – tweaked for an audience of RPG newbies and holdouts not typically engrossed by the genre. 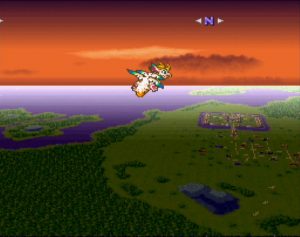 As a result, battles took place in real time giving you full, 360 degree control over your merry band of globetrotters. To keep battles brisk, an innovative ring system was put in place to alleviate the frustration of fumbling through clunky menus, letting players quickly cast spells, swap weapons, check stats or use items in the heat of battle. These and many more clever design choices helped differentiate itself from the tired tropes plaguing the past while maintaining a steady sense of pacing that kept the action tight and its many beautiful environments worth exploring.

That’s no understatement either, as Secret of Mana boasts one of the most playfully varied set pieces and fluid animations the 16-bit era had to offer. Throughout your misadventures in Mana management you’ll find yourself exploring colossal caverns inhabited by dwarven civilizations, skipping through fairytale forests in search of djinns, and lazily lounging outside seaside kingdoms and cities entirely made of gold – just to name a few. You’ll also meet all manner of quirky characters positively itching to help you on your righteous quest (albeit for a price) — from pun-flinging felines and boisterous blacksmiths to noble knights and dancing shopkeeps. I kid you not — even the jolly fat man himself, Kris Kringle, saunters down from his icy northern post at one point to lend a helping hand. 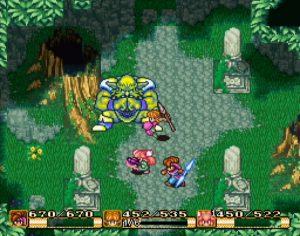 NPCs aren’t the only one’s bursting with personality, as seen in our wayward warrior’s two battle-hardened buddies: a hot-headed healer with a flair for the dramatic and spirited Sprite child trained in the dark arts. Each party member comes packing a unique punch of skills, like our hero’s proficiency with a blade or the mage’s many boss busting spells, that makes consistently swapping between them a delightful, yet tactical test in practice and perseverance.

While surprisingly not a part of the game’s original design, it’s hard to imagine Secret feeling nearly as prolific or groundbreaking without its infamous inclusion of cooperative multiplayer. As any seed snatching savior will tell you, Secret of Mana is best played with a couple comrades diligently buffing blades and slinging spells by your side. Groundbreaking for its time back in the mid ‘90s, an innovative cooperative multiplayer system allowed up to three would-be-heroes to seamlessly drop in and out play on a whim. This simple mechanic provided a uniquely different experience from tackling the campaign Han Solo style, transforming a genre typically akin to quietly reading a book by one’s lonesome into an uproarious social undertaking full of laughter and (tactical) shouting. Of course, for those wanting to stick to more conventional methods and plow through the adventure alone, the game provided a host of customizable settings to help boost your AI allies’ IQ, though it rarely proved as dependable or fulfilling as hitting the road alongside a fellow friend. 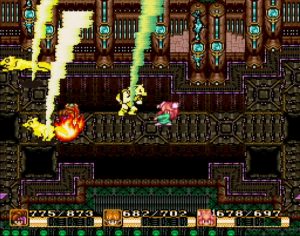 THE POWER OF MANA COMPELS YOU

From the haunted echoes of its opening title sequence to the supercharged symphony of its emotionally evocative final fight, Secret of Mana will forever resonate with me as one of gaming’s most prolific and influential treasures. Inspired just as much by The Legend of Zelda as its Final Fantasy brethren, it seamlessly integrates addictive action gameplay with elements of traditional turn-based RPGs much to the envy of most modern games today. More importantly, its excellent pacing and ability to support up to three friends for simultaneous play make it an accessible entry point for those previously intimidated by the genre. Coupled together with some truly mesmerizing characters, lush environments and one of the best 16-bit soundtracks the superpowered system has to offer and it’s easy to understand why this Mana powered masterpiece remains such a critically acclaimed classic to this day.