We knew going into yesterday’s Nintendo Direct that we’d be getting the latest look at Super Mario Odyssey, and what a look it was. With over seven minutes of attention given to this globetrotting grand adventure, there was a lot to see and learn about, both big and small, from this latest preview of what’s sure to be Nintendo’s biggest game since Breath of the Wild. So let’s jump up, superstars, and go through what we gathered.

After producer Yoshiaki Koizumi donned Cappy along with a Mario themed suit, we got to learn just a little bit more about the game’s story. We’d already been guessing about the nature of Peach’s veil, and wouldn’t you know it, we were right! We were formally introduced to Tiara, fellow Bowser victim and Cappy’s sister/motivation for teaming up with Mario on this journey. We still don’t know much about the nature of these hat ghosts, or if we’ll see any others, but we did get some flashes of Mario making the most of his haunted headwear. 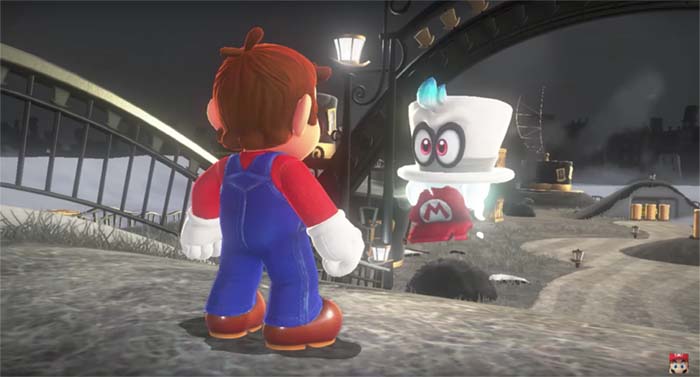 Seeing Cappy spin around Mario and clean up goop along with a rainbow trail gave me the first of a couple Sunshine flashbacks during the presentation, but it was when Nintendo started to play up the world tour aspect of the game that got me the most excited. Seeing the different paintings of Peach’s Castle or variety of Galaxies is what truly sold the games to me when it came to gameplay, and to have Odyssey keep going strong with its varied Kingdoms has me more onboard for this new installment over any Mario game in recent times.

After a few shoutouts to the already-revealed places, we got our first look at Shiveria in the Snow Kingdom. We knew about this place before, thanks to the game’s amiibo packaging, but to actually see its harsh blizzards and how they can understandably make for some difficult platforming has me shaking with anticipation myself. We also got a more focused look at the Seaside Kingdom’s Bubblaine. Remember when I mentioned Sunshine flashbacks? Well, I’m happy to say Bubblaine is a sun and sand spectacle — and then some. The water looks gorgeous and is described as fizzy, almost as if it’s carbonated. We get to see Mario dive into this soda-like surf before it transitions to free swimming as a captured Cheep Cheep popping bubbles beneath the waves. Perhaps my favorite bit during the video, however, was Mario tossing Cappy at a curious looking flower that then places a rocket at his back. This called to mind F.L.U.D.D.’s Turbo Nozzle by letting Mario run extra fast atop the ocean. 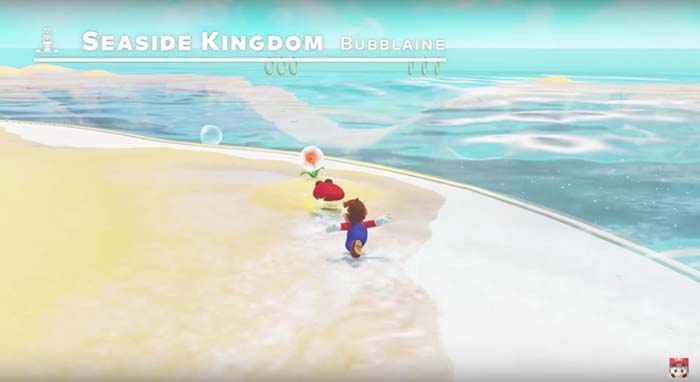 That was it for named Kingdoms, but it’s worth noting we did get to see a new, tropical environment in the video. Lots of green, purple and orange plant life on display to complement the sunset skies, though something about the foliage seemed less lush and more plastic. It almost visually reminds me of Yoshi’s Story, though not a lot of focus was given to the area. We saw some multicolored Wiggler-like enemies and puddles of ominous purple goop, but the show stealer here was Mario capturing an upright lizard-like creature with flying squirrel-esque gliders under its arms. Seeing it run around not just with Mario’s hat and mustache, but his shoes as well, was strangely endearing and I can’t wait to take it for a stroll myself.

The Journey and more

The Odyssey itself, Mario’s hat-shaped vessel, was next up, including a look at what may have been the first time he and Cappy take flight together. It takes fuel to get around the world though, and that’s where Power Moons come in. These collectibles and their functionality have been known for some time now, but even after gathering up over half a dozen during the game’s demo, I never would’ve imagined there’d be nearly 70 of the things in a given world — in this case, the Sand Kingdom. After seeing Mario find a few secrets, we got a glimpse of a new enemy more than likely associated with the Broodals. This rotund rabbit looked to be wearing a few Moons around her neck as she ordered a golden Chain Chomp to attack Mario in the Cascade Kingdom, setting the stage for some kind of fight. A montage of capture moments, including some fun looking platforming and an extra tall Goomba stack, ended with Mario taking over longtime cloud cameraman and Spiny tosser Lakitu, another in the long list of Mario mainstays that people will get to play as in Odyssey. 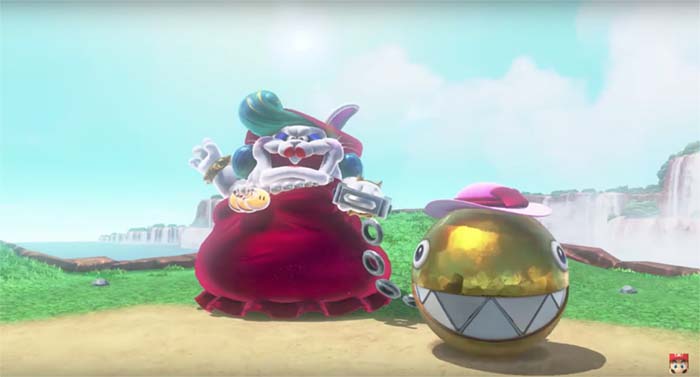 Classic, familiar faces are fun to see, but it was also nice getting a look at a new one. With how many Moons there are per extra large Kingdom, it’s understandable to get a little lost and confused. That’s where Talkatoo comes in. This bird-in-a-hat will tell you the name of missions that reward you with Power Moons in order to set you on the right path when you just don’t know where to go next. He seems to offer this service for free, in contrast to the Hint Toad. For 50 coins he might just spell it out for you plainly, while the newly revealed robotic Uncle amiibo will have you scan in a figure to give you a mark on your map where you’ll surely find a Moon. These three together should help any stuck players, though they all look to be optional and avoidable if you want to journey through on your own merit.

Power Moons can also come courtesy of minigame challenges. In that unnamed tropical area, you can take on a quartet of Koopas in a footrace called Koopa Freerunning. There’s also the Jump Rope Challenge and RC Car Challenge in New Donk City to test yourself with — not just against the game to earn a Moon, but also the world so you can gain some recognition. Each of these minigames will have leaderboards and rankings you can check to compare yourself on the world scale or against your friends. 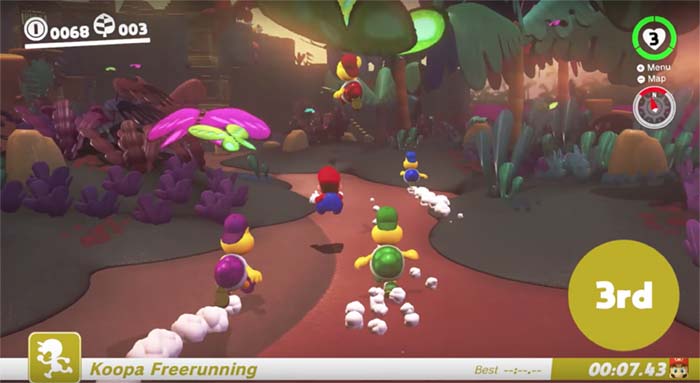 Crazy Cap got some focus next, starting with the flagship store in New Donk City located right next to the Dixie Theater. We got to see the Tostarena location, as well as a Bubblaine’s located on the back of a giant purple Dorrie. It’s here you’ll be buying outfits for Mario and souvenirs to decorate the Odyssey with. Newly shown outfits included the Mario Paint box art artist look, displayed in front of the great New Donk graffiti of Pauline and DK; a fluffy parka for Shiveria, Dr. Mario’s coat and headmirror in the Metro Kingdom as well, some Seaside Kingdom summer wear, and a Dry Bones skull-wearing caveman look for Fossil Falls. Each of these looks great, though the Mario Paint outfit was one I’d been hoping for from the beginning. Shown next was shopping for stickers and trinkets, as you can decorate both the exterior of your ship with decals and the interior with knickknacks you grab from each of the Kingdoms. Gotta love that Crazy Cap convenience!

Last but not least was the reveal of Snapshot Mode. It looks like, at any point in the game, you can stop the action and take a quick photo. You’ll have full camera control, to the point of being able to rotate everything to grab a vertically oriented shot. There are even visual effects, like grayscale or selective focus, to strive for picture perfection. We got a look at some pretty impressive snapshots too, including a mob of cute skeleton enemies, an underwater encounter with a giant eel (where’ve I heard that one before?), one of those multicolored Wiggler-like enemies captured by Mario, one last new outfit in the form of some Mushroom spotted swim trunks and even an encounter with Bowser. 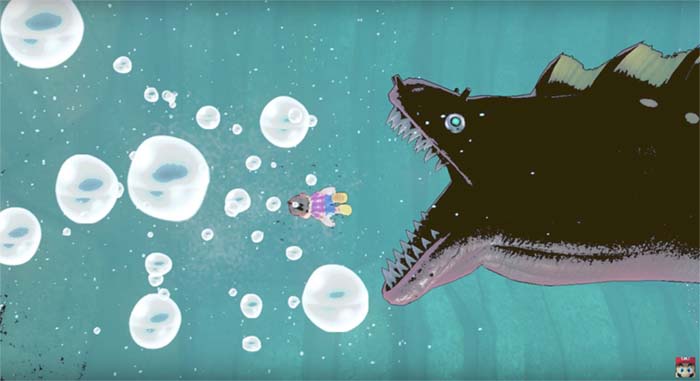 One last sizzle reel for the end showed off an extra impressive arcade throwback in New Donk City, Mario dancing along with Pauline, and Mario capturing a purple squid creature and propelling himself with water (more Sunshine!). The show stealing T-rex capture got a time to shine during the segment, Mario was spotted playing fetch with a dog on the beach, and our hero even dove into a painting in Tostarena that looks to lead to New Donk City. Are we looking at multi-world hopping quests, or just some convenient fast travel by way of an N64 callback? Keeping the strange in full gear, we even got to see Mario capture the letters of his own name in their trademark logo design, a snowball race in Shiveria, and some gliding around as that adorable lizard guy from the unnamed tropical Kingdom. All of this together, along with the game’s amiibo and the newly revealed Switch bundle can be yours when this voyage begins on October 27th.