This week in the Nintendo eShop: Monster Hunter gets some turn-based peanut butter in its chocolate, action-RPG formula, Rayman slaps some Teensies and robot brain bots channel their inner terminator.

DrinkBox Studios is slashing both limbs and prices off a handful of its critically acclaimed games. First up is the Wii U’s legendary luchador-inspired Metroidvania, Guacamelee! Super Turbo Championship Edition — body slammed down to 50% of its original pricing. The beautifully colorful, yet macabre first-person dungeon crawler Severed is also taking an equal cut in price on both Wii U and 3DS. Remember, that last one is cross-buy compatible, meaning a purchase on one system nabs you a free copy on the other.

Rayman Legends: Definitive Edition (Ubisoft, $39.99 | available 9/12) – One of the greatest, most beautifully whimsical platformers to ever grace the Glade of Dreams sucker punches Switch next Tuesday! As expected, players run, jump and smack our limbless hero through hundreds of mythical maps, all the while saving the adorably squishable Teensies from a life of imprisonment. Since its original release back in 2013, the game’s been critically praised for its masterful level design, incredible polish, beautifully hand-drawn art style and frenetically fun cooperative mode — in many ways outrivaling the best to come out of the House of Mario. Couple that with the Switch’s ability to be played just about anywhere and you’ve got an unstoppable tour de force every platforming addict needs to add to their collections. 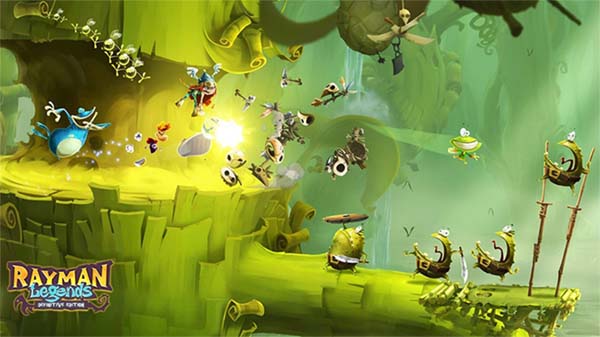 Lichtspeer: Double Speer Edition (Crunching Koalas, $9.99) – Ever dreamt of vanquishing legions of penguin vikings, zombified sausages and hipster ice giants with the mighty thrust of a light-imbued spear tip? Oddly enough, the good folks over at Lichthund created a game that meets those exact specifications! An action arcade lightspear-throwing simulator set in an ancient Germanic future, Lichtspeer chucks you in the lederhosen of a brave and mighty Germonaut on a mission to please the gods and restore balance to the universe. Icing on the cake, and exclusive to Switch, is a glorious co-op mode where up to two players can team up together and fight off hordes of evil space dwarfs and all manner of freaky folklore that dares stand in your way. Overall, the game received some pretty mixed reviews, with critics praising its audiovisual design and simplistic control mechanics while shaming its tendency to quickly ratchet up the difficulty via incredibly cheap deaths. Which, to be fair, doesn’t surprise me given the comical inclusion of a ‘Rage Quit’ mode. (I kid you not.)

NeuroVoider (Plug In Digital, $13.99) – This week’s fix in twin-stick shooter mayhem is brought to you by Flying Oak: the levitating bark with that oh-so-sappy bite. Set in a cyber futuristic world where evil robot space brains rule the galaxy, NeuroVoider has you bravely blasting bots into scrap metal in an effort to put an end to the eternal war of the machines that’s been raging for eons. The game features both rogue and RPG-lite elements — like procedurally generated stages, permadeath, and heaps of junk to customize your mechanized brainiac to your liking — that are sure to push your bullet dodging skills to their limits. While no real liberties are taken with genre mechanics, it rarely matters when both the bombastic soundtrack filled with all manner of electronic tunes and impressively pixelated environments spanning glowing neon cities littered in debris look this good. Did I mention it has four-player couch co-op? What are you waiting for? Take that red pill already and plug your brainhole into this Matrix-inspired romp this instant. 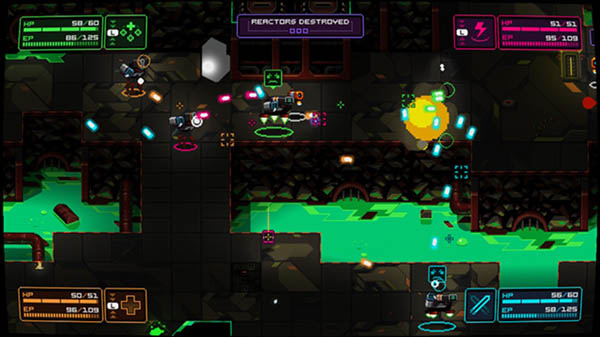 The Bridge (The Quantum Astrophysicists Guild, $9.99) – Whoever said video games aren’t a form of art clearly never played games like The Bridge. A logic puzzler that tests your preconceptions of physics and perspective (I promise this won’t be on the test), players manipulate gravity to swap ceilings for floors while venturing through seemingly impossible architectures. Most intriguing is the philosophical themes and gorgeously hand-drawn art in the style of a black and white lithograph, featured prominently throughout its 48 thought-provoking puzzles. That may sound a little short, though considering how intellectually challenging and visually appealing each board design is, the puzzle faithful among you will surely find plenty to theorize about for hours on end.

Double Dragon IV (Arc System Works, $6.99) – While you wait for classic NES games to inevitably bit.trip their way to Nintendo Switch, take comfort in the fact that ‘90s beat ‘em up action sequel Double Dragon IV is punching in to fill the void. Following the events of DD3, the Lee brothers embark on yet another karate-filled caper to rescue the series staple damsel in distress, Marion, from the evil clutches of a new gang known as the Renegades. (I know, pretty original stuff.) While franchise fans will relish in this fourth iteration’s painstakingly accurate representation of the series’ 8-bit past, newcomers will no doubt be turned off by its insistence on incredibly cheap AI and one-hit-kill platforming segments. There are, thankfully, some fantastic extras included once the main campaign is completed, like playable enemy character unlocks via progressing a 100 floor Tower Mode. As long as you keep your expectations in check, and for some reason relish in handling cracked, tear-soaked NES controllers, there’s definitely a good amount of fun to be found in this unforgiving blast to the past. 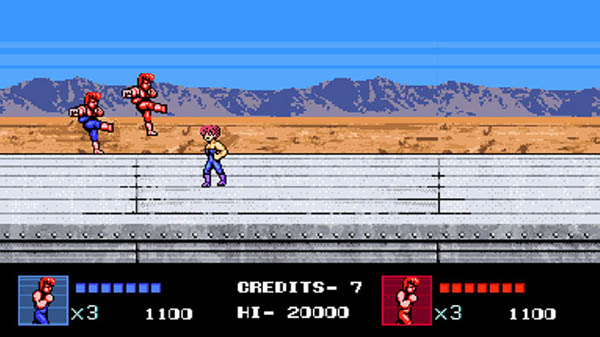 Physical Contact: 2048 (Collavier Corporation, $4.99) – Usurping RCMADIAX as the new kings of shovelware this week is Collavier Corporation and its strangely titled card game, Physical Contact: 2048. Seriously, what? Do you require a helmet to play? Does it take place in the future? Can I get the last ten minutes it took me to write this blurb back? These are the questions I’m left pondering after watching the game’s bizarre trailer recycle stock footage from the company’s previous release of two little girls living in a refrigerator, mashing buttons on an undocked Switch. Even if you were somehow interested in its card matching gameplay of “coalescing the same blocks in the region,” it’s hard to stomach the game’s poor presentation outside the confines of a free smartphone application. Know when to fold ‘em.

Arcade Archives – Blue’s Journey (Hamster Corporation, $7.99) – By the power of Grayskull! What’s this? A Neo Geo title that isn’t either a fighter or shmup? Mixing up the formula this week is Blue’s Journey: a colorful platformer with a smidge of heart, not to mention some pretty on-the-nose commentary about the dangers of climate change. With the powers of Mother Nature at his disposal, the heroic adventurer and intrepid insectoid Blue attempts to drive back the Daruma Empire from polluting and depleting the once peaceful planet Raguy from all its precious resources. Unfortunately, the passable platformer fails to both provide an innovative spin on the genre or push the Neo Geo hardware anywhere near its limits, resulting in an uninspired slog that fails to differentiate itself from its many 16-bit competitors. Unless you’ve got some serious nostalgia glasses stuck to your face, feel free to squash this mediocre after school special under your thumb. Trust me, even Captain Planet himself wouldn’t blame ya. 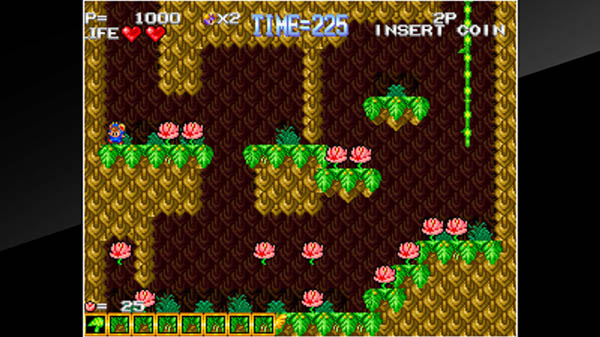 Monster Hunter Stories (Capcom, $39.99 | available 9/8) – The long-awaited spinoff of Capcom’s flagship franchise has finally swooped in! Intended as an entry point for gamers who feel overwhelmed by the series’ action oriented roots, Stories brings turn-based strategy to the patented formula for the first time, resulting in a RPG epic fellow Rathalos riders won’t want to miss. Most exciting is the ability to channel a monster’s unique set of skills and attributes to another, allowing you to breed the very best monster there ever was. Keep your eyes peeled and flame retardant gear ready for our full review in the coming days. In the meantime, maybe it’s high time you nabbed those Japan exclusive Monster Hunter amiibo before they skyrocket in price. Did you know the rider’s can detach from their respective beasts and swapped out on a whim? I sure didn’t! (Respectfully tosses wallet at screen.)

Crystareino (KEMCO, $9.99) – Fans of traditional old school RPGs, lend me your broadswords! Like most role-playing games under the Kemco umbrella, Crystareino plays it relatively safe, trading innovation for a hefty, content-rich adventure. Sure, the plot is nothing new and fairly predictable, chronicling a silent protagonist’s quest to rid the world of an evil Demon King hell-bent on world domination. Though with dozens of characters to recruit, 20 job classes to master and more side quests than you can shake a mage staff at, you’ll rarely find a second of the action tedious or boring. Some circles have even gone so far as to describe the game as a retro blend between Chrono Trigger’s graphics and Final Fantasy IV’s battle system. Praise doesn’t get much higher than that, folks. Still, if any of this has you skeptical, feel free to roll the dice in the app store for less than half the price. 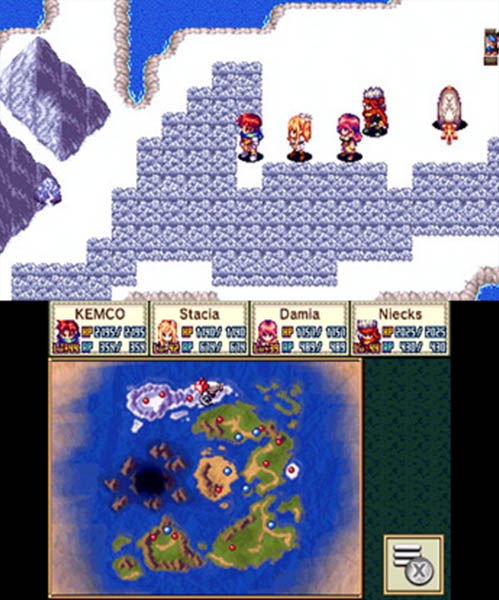 LEGO Dimensions – Wave 9 DLC Packs (Warner Bros., Various | available 9/12) – Support for Lego Dimensions continues to roll out next week with team and fun packs from new and exciting franchises. From the rude and crude dude himself whose name should never be repeated thrice to the indisputable spice in Professor Utonium’s cocktail of superpowered heroines, check out the full list below of toy sets and expansions coming this Tuesday, complete with purchasable Amazon links:

China Warrior (Konami, $5.99) – Ever wanted to feel like you were in a kung-fu movie? Well, keep looking. China Warrior is hands down one of the worst video games ever produced, more than deserving of its own planted plot right next to E.T. far beneath the dusty dunes of New Mexico. A side-scrolling fighter that forces you to constantly move in the direction of your opponent, you play a far less charismatic Bruce Lee type pummeling his way through wave after wave of braindead enemies dumber than a punching bag. This would all be somewhat acceptable if it weren’t for the oversized sprites dominating a third of the screen, or the simple fact you only have four inputs at your disposal (crouch, jump, punch and kick), all of which can’t be combined to form basic attacks such as aerial strikes or crouching sweeps. If, for some reason, you’re still waiting for the Wii U’s swan song to show up, this clearly ain’t it. 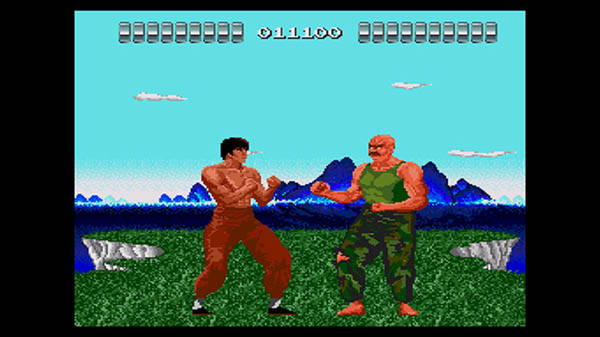 Detana!! TwinBee (Konami, $5.99) – Fortunately, the whimsical shooter Detana!! Twinbee released today to help wash away the horrible aftertaste left by China Warrior. For those unfamiliar with the series, the game’s an insanely fun, vertical-scrolling cute ‘em up chock-full of goofy ideas and playful personality that’s rarely seen a release in North America outside the Wii Virtual Console. Like with most games in the genre, two player co-op reigns supreme as both you and a buddy make mincemeat out of cartoon clouds, floating forks and loathsome ladybugs. It’s also widely known for its lively, energetic soundtrack dreamt up by the great Michiru Yamane — famed composer for Castlevania: Symphony of the Night. Unless you have a serious stigma against shmups, I wholeheartedly urge you to toss a few bell bags this incredibly imaginative shooter’s way.