Hands-on: Jumping into Flip Wars for the Nintendo Switch

Most of the titles on offer at the Nintendo Summer of Play were ones I had already managed to try before, but away from the massive lines for Splatoon 2 and ARMS was a humble little station holding Flip Wars for the Nintendo Switch. When I picked up the Joy-Con for this one, it was readily apparent what the objective was: jump to claim tiles on the board and have the most tiles as possible once time ran out. Every jump is followed by a ground pound that flips over the tile you land on and ones in each cardinal direction from it, and then changes it from white to your character’s color. With four players vying for chromatic superiority simultaneously, it actually managed to get pretty hectic once I figured out the rest of the game.

Over time, power-ups will arrive as well. These can speed up your character, increase the number of tiles flipped when they ground pound, and alter their spread from a cross array to an “X” pattern. The most frantic times were caused by a rarer rainbow colored power-up that upped your speed and impact considerably, though unless this happened closer to the end of the match, it was nothing so overpowered that could sway things unmistakably for that player. Grabbing as many of these power-ups as quickly as possible is the key to getting a foothold — but when it comes to victory, you need to be mindful of everyone else’s power-ups and positioning as well. 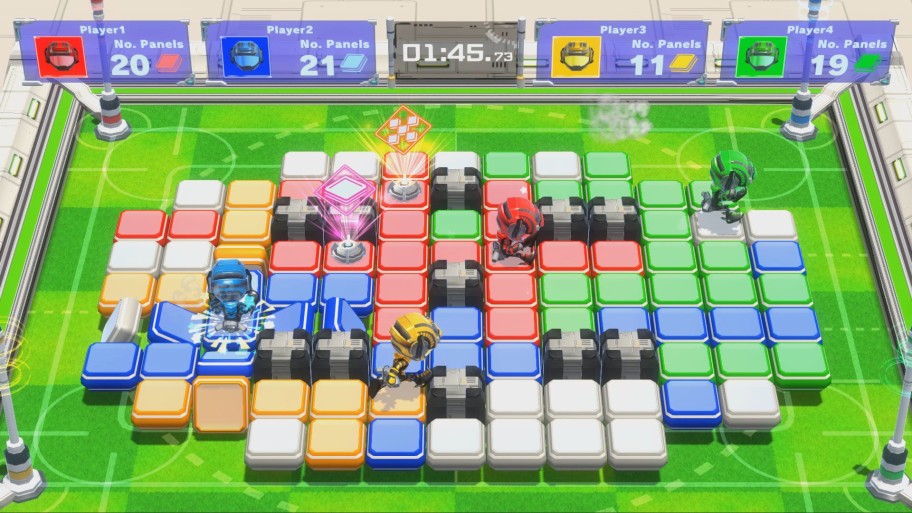 When a player leaps up, their impact doesn’t just give you terrain; this is also a form of attack. If another player is in your impact zone they’ll be sent flying back to their starting corner and will lose all their power-ups, which are then sent back onto the board for anyone quick enough to grab them. It all feels very much like Bomberman in terms of setup, and with shades of certain Mario or Wii Party mini-games as well. These similarities aren’t negative components of Flip Wars, mind you, though they do take away from any potential sense of originality from the game.

A few gameplay elements within Flip Wars, also found in the titles mentioned above, get in the way of the potential fun factor. The most apparent was the speed of the game. Your character moves incredibly slow, with a boost coming when you’re walking on your own color. In something like Bomberman, this lack of speed isn’t as apparent with all the obstructing blocks up, but with Flip Wars’ wide open playing field and eight way movement, there’s no getting around the pace’s limitations. Your jump is incredibly slow as well, though that forces you to commit to your decisions made in the moment. In midair you can even give a one square dash as a last second means of changing your landing spot and catch opponents off guard, though the input for this felt overly sensitive at times. 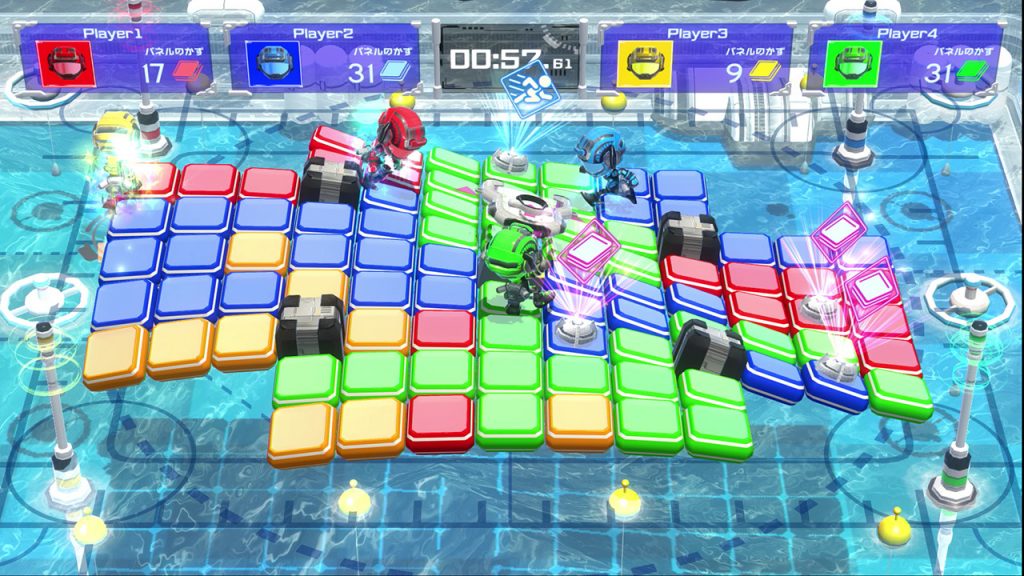 I thought Flip Wars was plenty fun and could make for some great multiplayer action with a group of local friends, though with its pace being what it is, the early moments of any match end up feeling somewhat bogged down. This, however, is alleviated with how tense the closing moments of a given match can be. In the end, the success of Flip Wars may depend on the expansions and tweaks made to the core options and modes in the final version of the game.