Before playing Fate/Extella, all I knew about the franchise was that it had a female version of King Arthur while the plot revolved around the Holy Grail. Going in, I generally assumed it would be a quirky anime take on the Knights of the Round Table (maybe we’d see the Knights Who Say に?) but boy oh boy I couldn’t have been more wrong.

You see, as I quickly learned within the first 15 minutes of Fate/Extella, the franchise is set in the future, with a “Holy Grail War” taking center stage. Several talented individuals are aided by “Servants”, who are the reincarnations of famous figures from history, in an effort to win the Grail, which grants wishes.

Of course it’s a lot more complicated than that, and Extella casually reveals facts about the setting that would have been significant twists in earlier entries. That said, Extella itself takes place in a separate universe to the main saga that began with the original Fate/stay night visual novel and its anime adaptations. It’s actually only related to the events of two games – Fate/Extra for the PSP and its Japan-only re-telling, Fate/Extra CCC. 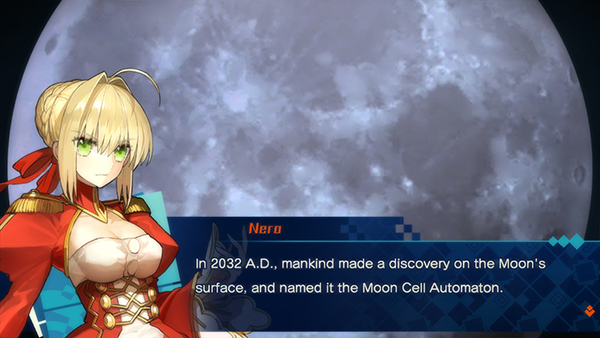 Speaking from experience, though, the game isn’t totally unapproachable from a newbie’s perspective. The uninitiated just have to be ready for a very, very wild ride that’ll result in a lot of bemused head scratching.

In Fate/Extella you assume the role of a character whose name and gender are entirely of your choosing, with a different Servant as your confidant in each main story mode. When it comes to combat, however, this somewhat generic player character takes a backseat as you effectively possess Servants on the battlefield through a ring called the Regalia.

And what a battlefield it is. Quite clearly taking a few cues from Koei Tecmo’s Dynasty Warriors/Musou franchise, you’ll be defeating hundreds upon thousands of enemies at a time as you conquer the beefier “Aggressors” to secure zones. Once you’ve captured enough of these areas, or completed another tangential objective, you’ll summon the boss Servant from the enemy’s side.

That said, the combat feels a lot more frantic and fast paced than many Musou games past, with air combos, quick dashes and flashy flying transitions between zones keeping you moving. The enemy is also very active, and your attention will be divided quite a lot as you figure out a plan of attack on the fly. There’s little in the way of the tedious lulls that plague many games in the same genre. 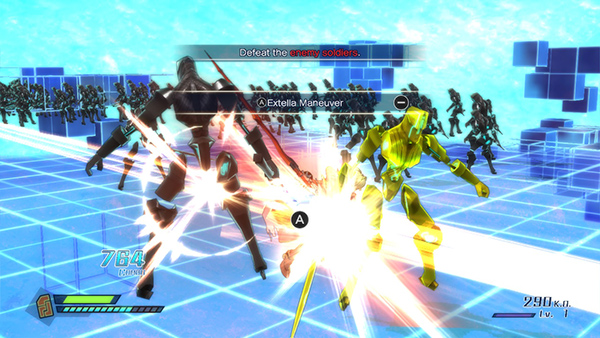 On top of the main story Servants you can also play as tertiary characters who have their own fully featured movesets. You can either take them for a whirl in Free Battle or go through their respective Side Stories, which are unlocked gradually as you progress in the main story. These are shorter sagas without the 3D rendered cutscenes, but they help shine light on some characters who are otherwise pretty one-note. Unfortunately, several of the stages that make up these Side Stories are effectively repeats of the main quests, just with slightly different dialogue. Rest assured, if you play this mode as and when it is expanded the experience can get more than a little repetitive.

In both story modes you’ll have the opportunity to hang out with its associated Servant in their room. Here you can talk to them, which offers more than just extra dialogue. If you select the right responses to their inquiries you can increase your Bond, which in turn allows you to equip more Skills onto the character. These can bestow elemental defenses, health upgrades, increased drop rates and more.

The dialogue in these intermissions can be very hit or miss, depending on your tolerance for anime archetypes. In at least one story, the conversations often lead to awkward flirtations with the slightly yandere female reincarnation of Nero, the Roman Emperor of old. I told you it was a wild ride. The localization from XSEED definitely holds up regardless, thankfully, with more than a few lines getting some chuckles. 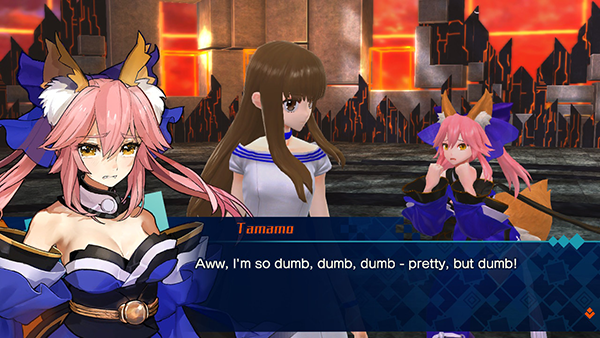 From the get-go you can tell Fate/Extella was first designed with the PlayStation Vita in mind. While the presentation holds up and several of the models are sleek, the areas you explore are on the small side. While the game does mask this shortcoming with the flight between zones, it almost feels like it was done to divide up the map and reduce the strain on less powerful hardware. At the very least, these limitations mean the game runs at a relatively consistent frame-rate on Switch, with only a few hitches during more elaborate scenes. 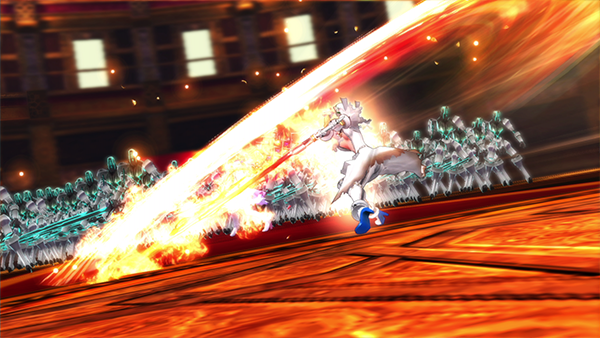 In terms of general structure, Fate/Extella is best played via the Switch’s handheld mode. Most missions last around 20 minutes, making it a perfect pick-up-and-play game whenever you want to blow off some steam, which is only helped by the generous auto-saving after each mission. Many of the assets even look better on the smaller display, with textures, characters and the UI looking far more crisp than they do blown up on a TV screen.

Without a doubt Fate/Extella: The Umbral Star offers a lot of bang for your buck, with several characters to level up and many stories to unfold. Its lasting power all hinges on whether or not it gets its hooks into you though, and that’s a much tougher proposition.

Ultimately, if anything about the story and lore intrigues you, I’d advise you dive into Fate/Extra first, as Extella “inherits the blood” of that game, according to creator Kinoko Nasu.

On the other hand, if the narrative isn’t a concern to you but you’re still in the market for a high-octane yet strategic action game, Extella’s a solid choice, especially given the limited options available on the Switch in these early months. Just be prepared for some pretty arduous mental gymnastics if you decide to take the plunge. 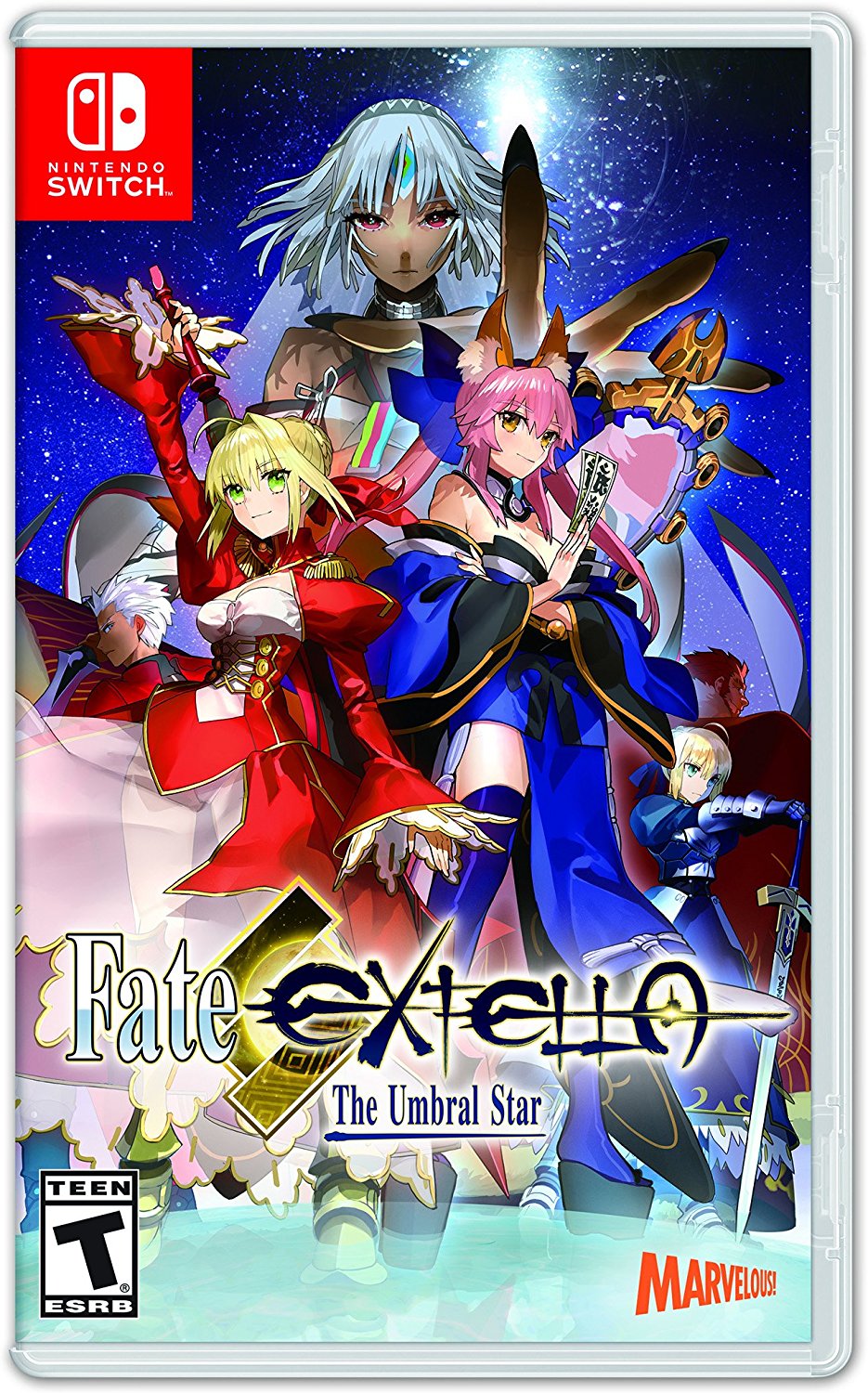