After years and years of playing, something just feels right about picking up a controller and jumping into Street Fighter II. Fighting games represent some of my all-time favorites and Capcom’s 1991 arcade hit defined those sensibilities.

There are plenty of versions of it out there, but thanks to the convenience of the Switch console itself, some heightened presentation and a host of extra modes to enjoy, Ultra Street Fighter II: The Final Challengers may be the most complete and appealing iteration of the game for fans not dead set on an older release. There are a few problems keeping it from taking the championship title, but Ultra Street Fighter II is a more than worthy contender for holding up Capcom’s legacy.

USFII doesn’t offer anything new in terms of gameplay, and I think that’s for the best. While I can’t personally speak for any balance changes that may exist, many early reports have noted tweaks to things like how throws work and the ability to store supers for charge characters. Those didn’t get in the way of my enjoyment, but anyone after a perfect port of Super Turbo or more invested in competitive playing should be aware.

The biggest shake-up is the addition of two new characters to the line up. Evil Ryu and Violent Ken may appear as simple palette swaps and admittedly they don’t offer much of anything new visually, but they do play differently. Violent Ken in particular feels like a lot of fun. He’s extremely quick, with great walk speed and a command dash that’s not only great for closing distance, but for crossovers and mix ups as well. Akuma is also available by default, giving the game a total roster of nineteen characters to choose from.

The new port offers local and online versus matches, though unfortunately I was unable to test any of the game’s online features ahead of release. Locally the game plays great, and with two Joy-Con easily accessible by every Switch owner it’s easy to put a match together. While the button layout on the Joy-Con isn’t ideal for a six button fighter, I was surprised at how easily I adapted to it. I even prefer this method over handheld mode, making this a game that lends itself extremely well to the table top.

That said, the game shines on an HD television, with both the new art and the touched up sprites looking fantastic. I found myself switching between the two visual styles, though I feel the stages look better in the classic style. As for sound and music, classic style gets my vote there, though the new mixes of the music and use of Street Fighter IV’s voice and effect samples are usable for anyone without nostalgia for the originals.

Outside of the core versus gameplay you’ll find the classic Arcade mode as an option, though USFII doesn’t shake up that standard feature in any way. As far as new modes go, there are two on offer that vary in quality. The first is a co-op mode, where you and either a friend or an AI ally can take on an opponent together. This was a fun distraction that offered for unique combo opportunities, adding twists to the game’s standard mechanics that can be taken on with a friend.

On the flipside, the Way of the Hado mode comes off as cumbersome, albeit inherently silly. Vaguely mimicking Ryu’s special moves in a mode that uses Street Fighter V’s assets is a curious addition, to say the least, but it doesn’t amount to more than controller flailing. Add in a welcome, though slightly cumbersome, color editing mode and a complete out-of-print artbook scan and the game’s extras end up being more good than bad and mostly complement the core gameplay.

The biggest hurdle that comes with Ultra Street Fighter II is the price point. This is a $39.99 title and that’s arguably too much to ask for Street Fighter II, no matter how polished. Even factoring in the unique opportunities the Switch affords and the presence of the massive artbook, it feels like a steep price of entry. This is tough for me to state, because the game itself gets my recommendation easily, but I feel only fighting game fans and Street Fighter II loyalists could see that price as doable.

Anyone that picks up Ultra Street Fighter II: The Final Challengers won’t be getting just another port. Instead, they’ll have a well put together, finely tuned version of one of the greatest games of all time. If you’re after a fighting game you can play with just about anyone, anywhere, you need look no further. Only time will tell how the competitive scene embraces it, but if that’s of no concern to you and the price is justifiable, then USFII is a fantastic addition to any Switch library. 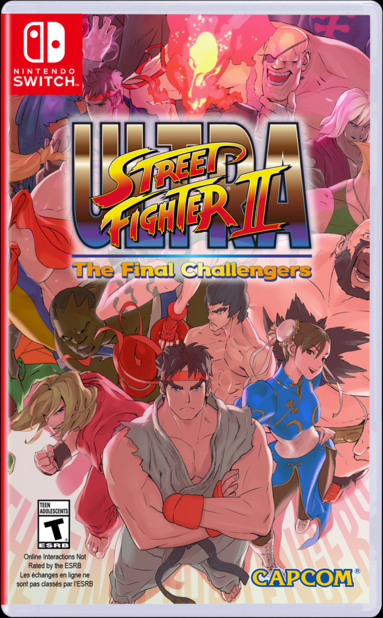