Kicking back with a few drinks at Tokyo’s Capcom Bar

Once I found out I’d be traveling to Tokyo I knew there were a few stops I’d have to make while there. I’ve been playing Street Fighter my entire life, have loved everything Clover Studios made in its time, and can go on and on about why Mega Man 3 is better than 2. The Capcom Bar in Shinjuku wasn’t too tough to track down, but you definitely have to keep an eye out for it. Nestled comfortably in an existing property, I was greeted by a friendly staff member and shown around to the relatively small, yet inviting, space that was coated in Capcom art, games, figures, plushes and more.

Seated at the bar, I was handed a menu designed not by food type, but by represented games. Flipping from Mega Man, to Monster Hunter, to Ace Attorney and more, the presentation was definitely on point with the drinks. If you can’t read Japanese, worry not: not only are there pictures of everything, the back cover has all the menu items listed in English, along with a breakdown of what’s in them for the drinks. Some of the food items seemed plain by comparison, but it was there that in game dishes were represented versus the character themed cocktails. At the time of my visit, the bar was beginning to phase out a lovely Ōkami themed menu, so I felt that it was necessary to grab a drink from the soon-to-be-gone list before all the specialty items were gone for good.

The Amaterasu themed drink was pleasantly smooth, with a strawberries and cream-like flavor. If that were all there was to it then I’d not have been so sold, but the drink was enhanced by a plume of cotton candy used to represent Ammy’s fur. Further down, a single green cherry represented Issun, while a kiwi slice around the straw stood in for her Reflector. The drink wasn’t a letdown by any stretch, but the presence of these details let me enjoy it in a completely unique and special way. As a present for ordering from the Ōkami menu during its fading availability, I also received a pin (the design picked at random) from the barkeeper.

After I’d finished, I was handed a controller and shown that I could freely play on one of the monitors over the bar. Resident Evil was on display, though when I asked for Street Fighter the bartender was more than happy to swap out the game for me. Once that was set, I decided it only fitting to order a second drink to suit the occasion, and a Hadoken themed cocktail more than fit the bill. This was one of the alcoholic options, and featured some great flourishes to match fighting games’ most iconic special move. A blue, round, whiskey stone-like orb served as the Hadoken itself, with a yellow candied decoration adding some sweet style to offset the admittedly strong tequila based drink.

I may have enjoyed the drinks, and by the look of things the other guests liked their own beverages too, but what really made the Capcom Bar stand out for me was the friendly staff. Once they found I spoke some conversational Japanese, paired with what English they knew, we got to talking and had a wonderful time discussing the differences between regions in the games. While the change from Rock Man to Mega Man was known, I had the pleasure of explaining that “Blues” was Proto Man outside of Japan. And let’s not get started on all the confusion that came up with respect to the Balrog, Vega, M. Bison name switching. They were fans themselves, able to talk to me about multiple generations of games and share in my own excitement for being there. They even threw out themed lines and responses based on certain orders, like playing some Monster Hunter music throughout the bar for a party that ordered a larger meal from that section of the menu. We even exchanged Ace Attorney exclamations, with them surprising me with an “Objection!” in response to my own “Igiari!”

Past the great service, the bar itself was just a nice place to relax. It was a pretty quiet time when I was there, and while I preferred the conversation to playing games, free play with any order kept me focused on games whenever I wasn’t talking with the staff. There were also plenty of art books and guides on a book shelf off to the side, which lent themselves well to assisting conversations about games or characters when language failed us. There was even a small stack of sketchbooks where fans could draw pictures and messages, and while I’m no artist I couldn’t resist putting something together for a certain DS game I’d love to see receive a bit more adoration.

If you ever find yourself in Tokyo with a little free time on your hands, I’d definitely suggest spending it at the Capcom Bar. The full menu is available online, though it doesn’t include the English cheat sheet; you’ll find that handy tool in the bar itself. Japanese isn’t required, but it’ll help make for a greater time all around. Even if you can’t relate through language, odds are you’ll be sharing in your fondness for games, Capcom or otherwise, and you’ll be able to walk away with a fun story to tell. 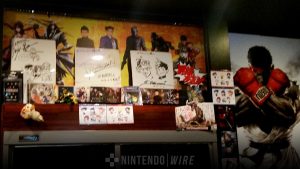 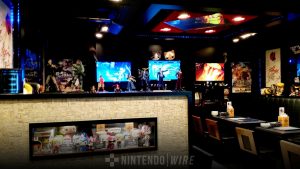