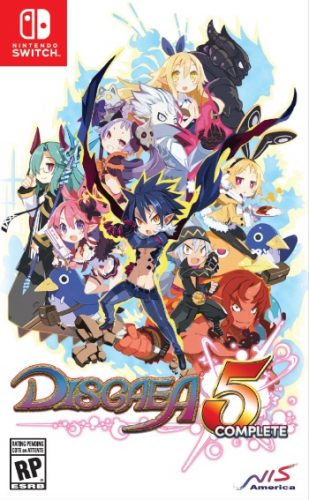 The Switch’s library continues to grow and fill in genre gaps, and descending upon the world to fulfill that strategy RPG need is Disgaea 5 Complete. Originally released on the PS4 two years ago, the latest entry in the hellishly delightful Disgaea franchise comes to the Switch with all its DLC content in tow and on the go. If you’ve already toured these Netherworlds before, there might not be a lot on offer, but if it’s been awhile since you’ve tossed a Prinny, or it’s your first dive into the ultra-customizable experience, it’s more than worth the mountains of time and attention the game can potentially demand of you.

A tale of vengeance and rebellion

Disgaea 5’s story brings together a cast of demons and Overlords to oppose a fearsome conqueror taking over several worlds, including your own. While it takes a while to crack open the depth of this plot, the focus on underdogs rising up and against a common foe gives a degree of likability to the core cast. Main character Killia attempts to remain aloof and disengaged from the growing force alongside him, offering a contrast to the more colorful personalities of the rest. These include spoiled and arrogant Seraphina, the brash and powerful Red Magnus, scheming and cool-headed Christo, self-proclaimed hero Zeroken and the adorable curry-lover Usalia. They eventually band together as a rebel army driven by their own, unique desires for revenge against the mysterious Void Dark.

While the events themselves are presented in a serious fashion for its cast, Disgaea as a series has always been over-the-top and comical in its stylings. The banter between characters serves to make them all that more endearing, and seeing their stories play out across the game shifts their goals from mere “revenge” to more deep and relatable ones. A fondness or familiarity with anime and JRPG clichés will make things all the more enjoyable, as Disgaea isn’t ashamed of its inspirations and core audience. All cutscenes can be skipped or rushed through though, if it doesn’t sound like your brand of entertainment, but to do so would be to miss out on some fun performances and writing from the game’s localization. That said, Japanese voice options are also available for purists.

Other than its tone and style, Disgaea is most known for just how deep and customizable the gameplay can be. With several classes, stats, resistances, types of equipment, passive abilities, and more to carefully cultivate with your characters, it might come off as a little intimidating.The game does offer explanations of its systems within the central hub location, taking some of that edge off, but there’s still a lot to digest and manage.

While it may be tempting to rely on the core story characters, you’ll want to be recruiting more allies as time goes on. As you progress, the available parameters to tweak these characters, as well as equipment, skills and other elements, increase. You can even take the characters you’ve raised and reincarnate them into a new class, retaining their growth to a degree, but starting them off in a new class at level one. By doing this repeatedly you’re able to continuously strengthen your army and also tailor them to your own wants and needs. If you have a clear plan in mind when it comes creating a specific type of army, be prepared to do the necessary studying and planning, for the process requires time, patience and know-how.

Planning before battle is only one half of the equation, as careful thinking must be done in the thick of things. Sending out your characters and attempting to attack is one way to go about it, sure; but you’ll see better results thanks to careful placement and combos. By positioning allies next to each other, they can attack together for a boost, and you increase the overall damage by having several attacks happen in succession. Add in attacking from behind, attacking from a distance, utilizing the unique ranges of special abilities and unique map effects, and the amount of things to think about goes up and over most other comparable series. There’s even a Revenge mechanic that ties into the game’s running theme, with characters having a gauge that goes up when damage is dealt to your side or other factors. Once the gauge is full, you get guaranteed critical hits, reduced cost skills — and for certain characters, an “Overload” ability that more often than not is either super helpful for you, or super hurtful to your enemies.

Learning how all of this works together was the real joy of Disgaea 5 for me, and to the game’s credit, a lot of the numbers and info are provided with a move of the cursor and some quick menu navigation.

The game’s hub offers plenty of resources and facilities for you. Standards like item and weapon shops, character recruiters, quest givers, and some of the series’ signature features like Item World are all present and accounted for. Some of these even take the game’s vengeance-driven rebel army theme to heart, such as a prisoner interrogation feature and the Disgaea-standard Dark Assembly being held as a strategy meeting. While the game throws you at these headlong at times, it also allows you to talk to their corresponding NPCs for explanations. It’s here that I started to feel the weight of the game, though. I definitely love that Disgaea has so many opportunities to fine-tune my experience. Presenting so much of it, one thing after another, across the early game made things a bit intimidating. Not all of these come off as absolutely required to get through Disgaea, but they’re present for a reason, and it’s easy to get lost wondering if you’re doing things right. Press onward, though, and you’ll eventually find a comfortable enough understanding of Disgaea to figure out the more complicated areas of the game. It’ll be worth it, if you give it the time.

With all of this in mind, the game may not force you to utilize every one of its systems and mechanics, but you’ll want to wrap your head around the map — and character-specific ones especially. It’s possible to progress on brute force and minimal understanding, but the challenge only grows over time. This game isn’t all that forgiving, as enemies will gang up on stray units and won’t be shy about using their skills. Learn from them and do the same.

The game has technically been out for a while, so there’s (thankfully) plenty of resources and guides for its more specific micro managements. With assistance from the AI and the large number of enemies that Disgaea can potentially throw at players, a game of grinding and growing is delivered in a very rewarding fashion. Thanks to all of these factors, players are given the opportunity to create armies that simply can’t be stopped.

I enjoy Disgaea 5’s sprite work and animations to no end. I’ve always been a sucker for them, and this title in particular has them looking gorgeous. The colors pop, with the characters standing out clearly throughout the environments. The game allows for a great amount of camera control as well, allowing you to see all of this from multiple angles. Special attacks and team-up abilities are where this all really shines though, with characters darting around and performing massive-scale attacks both on and with each other. The HD art and animated scenes are great to look at as well, though it’s definitely the sprites that steal the show.

When it comes to playing on the Switch, I highly recommend having this one on your TV to really make the most of the visuals and to allow a greater view of the maps and text. The game didn’t look bad in handheld mode either, though it couldn’t reach the high definition glory of the home console config. I would suggest avoiding tabletop play if you can though. Having the small display at a further distance can make text a bit difficult to read, and the sprites and animations lose some of their luster from a natural distance.

I’ve played a lot of strategy games throughout my life, and Disgaea 5 stands out among them all. While I feel that there are too many moving parts at work for me to get a full and perfect understanding of the game in its entirety, the ones that I did become comfortable with gave me a greater sense of accomplishment throughout the game.

There’s a satisfying amount of thinking involved both before and during battles, and with a cast of characters that are more than what they seem at a glance, I didn’t want to stop playing. Just make sure you have plenty of time on your hands, because this game wants you to give it your all. With depth and difficulty befitting its demonic inspirations, Disgaea 5 Complete provides one hell of a good time for players willing to take it head on. No burning need for vengeance required. 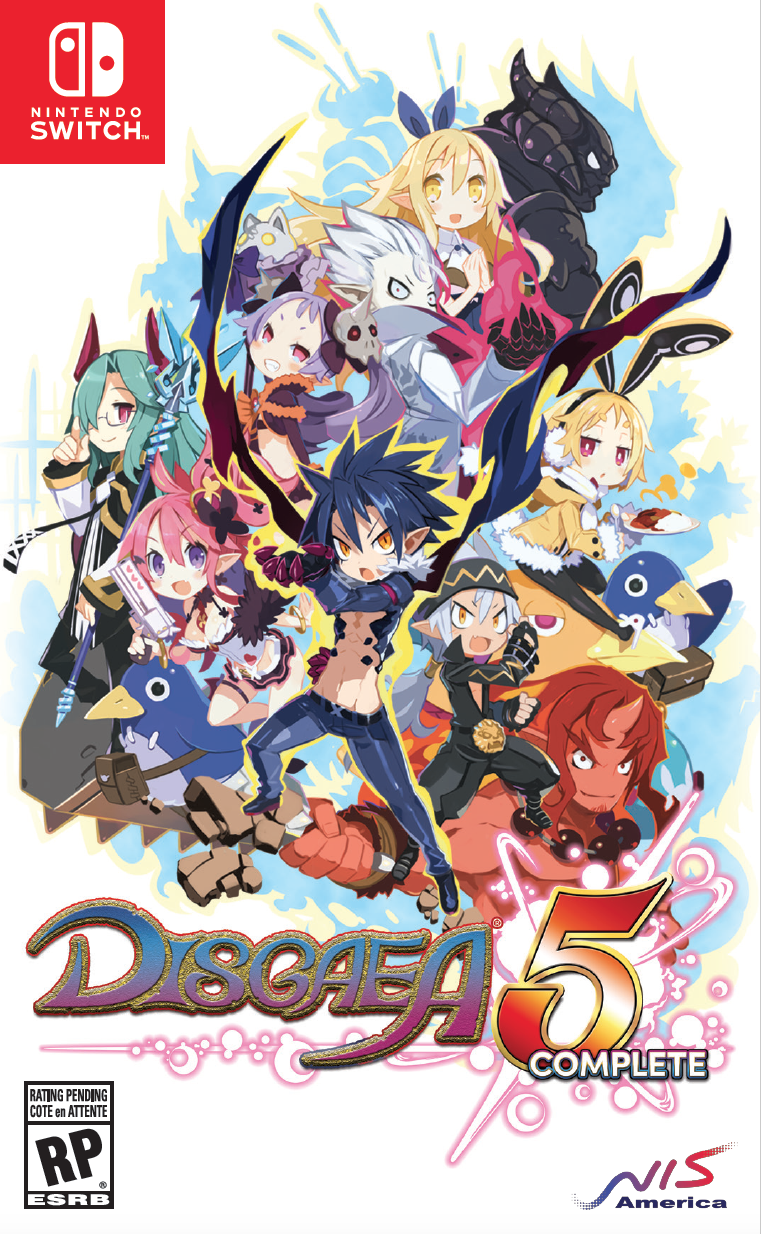