Things could have been very, very different for the gaming industry. It’s funny how sometimes small and easily forgotten ideas can drastically change the way huge corporations evolve. A picture that surfaced on /r/Gaming recently is a perfect reminder of this, and a first look, for many, at a very important piece of gaming history. 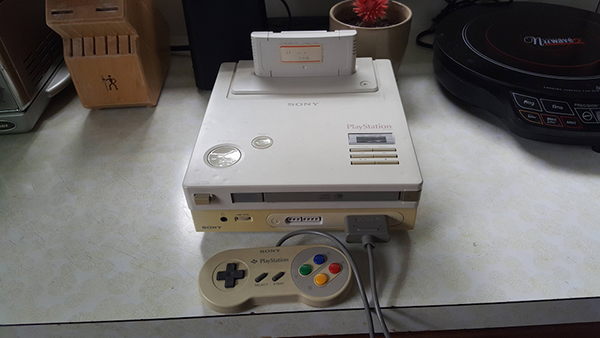 This is the Nintendo PlayStation. I’ll let that soak in for a minute. If this inconceivable piece of technology is completely new to you, don’t feel too bad. Even though it bears two of the highest profile names in the video game industry, its memory and most of its physical remains have been more or less lost to time.

Also referred to as the SNES-CD, this would-be peripheral for the Super Nintendo was co-developed by Sony and Nintendo in the late 1980s. Nintendo had commissioned Sony to produce a CD-ROM add-on for the SNES, with the goal of expanding the storage capacity beyond what was offered by its native cartridges. A team-up like this sounds inconceivable in hindsight, and what happened next is perhaps proof that this device, and the partnership behind it, was just never meant to be.

In 1991, at the Consumer Electronics Show, Sony formally unveiled the “PlayStation.” At the very same show, Nintendo announced that, because of licensing issues with Sony, it would instead be partnering with Philips to bring the CD-ROM add-on to SNES. This new alliance was ill-fated as well, though, as neither of the peripheral devices ever went into mass production.

An estimated 200 prototype PlayStation units were created, making the one pictured above, if legitimate, an exceedingly rare find. Reddit user Analogueboy claims to have found the treasure in a box of his dad’s junk, who happened to work with a Nintendo employee that got rid of it. One man’s trash is a bit of an understatement in this situation.

This ultimate gaming crossover ended before it started, and countless games likely died with it. Sony, probably feeling a bit betrayed, decided to make its own graceful entry into the console business a few years later with the Sony PlayStation. That brings us up to speed with the console rivalry that still burns strong today.

Imagine, though, what might have been if the Nintendo PlayStation had worked out. If Nintendo had adopted the disc-based format sooner with Sony as a development partner. Would Microsoft ever have seen fit to enter the console race against this juggernaut? Would the fate of Sega’s console business have played out any differently? Most importantly, what would Nintendo and Sony look like today?