Guide: Unlock all classic ‘Zelda’ costumes in Breath of the Wild

When The Legend of Zelda: Breath of the Wild was first announced, fans were curious to know if Link’s classic tunic and cap would make the trip to Hyrule. While most of Link’s green duds aren’t found in the game by normal means, thanks to the power of amiibo, you too can play Breath of the Wild as your favorite iteration of Link.

Ocarina of Time (Hero of Time)

The Hero of Time armor consists of three items: the Cap of Time, Tunic of Time and Trousers of Time. Each of these are randomly dropped when you scan in the 30th Anniversary Ocarina of Time Link amiibo in the game. Each amiibo can only be scanned in once a day, so it may take some time to acquire the entire set.

The Hero of Twilight armor consists of three items: the Cap of Twilight, Tunic of Twilight and the Trousers of Twilight. Each can be randomly dropped in a chest when you scan in the Super Smash Bros. Link amiibo or the 30th Anniversary Twilight Princess Link amiibo. Each amiibo can only be scanned in one time each day, so it may take some time to get the entire set.

Wind Waker (Hero of the Wind)

The Hero of Wind armor consists of three items: the Cap of the Wind, Tunic of the Wind and Trousers of the Wind. These can be randomly dropped by scanning in either the 30th Anniversary Wind Waker Link or Super Smash Bros. Toon Link amiibo. For added authenticity, you can also randomly receive the Sea-Breeze Boomerang from these amiibo. Scanning in the Wind Waker Zelda amiibo can give you a shot at getting the Hero’s Shield from Wind Waker, too!

Skyward Sword (Hero of the Sky) 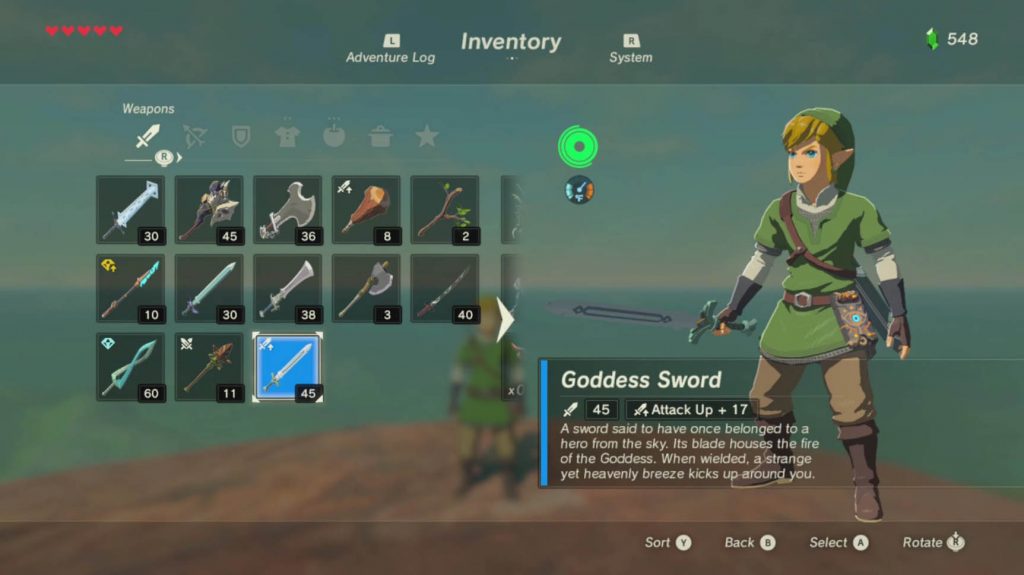 The Skyward Sword-themed clothing set can help you feel like a true warrior of the Skyloft Knight Academy. This set consists of three items, as well: the Tunic of the Sky, Cap of the Sky, and Trousers of the Sky. This armor set can be obtained in pieces by scanning the Legend of Zelda 30th Anniversary Link Skyward Sword amiibo for random treasure chest drops. Each amiibo can only be scanned in one time each day, so it may take some time to get the entire set.

The Legend of Zelda (Hero’s Set)

The Dark Link clothing set is a little bit more complicated to obtain in Breath of the Wild. First, you must defeat each of the four main dungeons in the game. You also have to find a strange monster-loving merchant named Kilton. Kilton can be located to the Northeast in Deep Akkala. Lucky, finding him is quite easy, as he sets up shop in the left eyeball of a large, skull-shaped lake. (See the map below.)

During a quick conversation with Kilton, he’ll inform you he’s ready to open up for business. However, a hard to reach skull-shaped lake is hardly an ideal market space, so Kilton will make way to towns scattered all around Hyrule. His shops can be found only at night just outside the following towns, and his balloon store is easy to spot at a distance:

Once you make way to one of these spots at night, you’ll be introduced to a new currency: Mon. Kilton isn’t interested in traditional Rupees, but rather pieces of your fallen enemies (which seems kind of dark). For each monster piece you bring him, he’ll exchange it for this unique currency, with more Mon being earned for rarer monster parts.

To obtain the entire Dark Link Costume Set get ready to hand over quite a lot of monster parts — 3,997 Mon’s worth to be exact. You’ll quickly find out that acquiring that much Mon isn’t an easy task. The best method we’ve found to use is hunting Guardians, as ancient screws, cores, springs and gears fetch a high price. You can also farm materials from the three dragons around Hyrule.

Once you’ve collected enough Mon, the Dark Link set is yours! As an added bonus, equipping all three pieces gives Link a speed boost at night. The Dark Link costume is also perfect for those evil photo ops your have throughout your journeys. Enjoy! 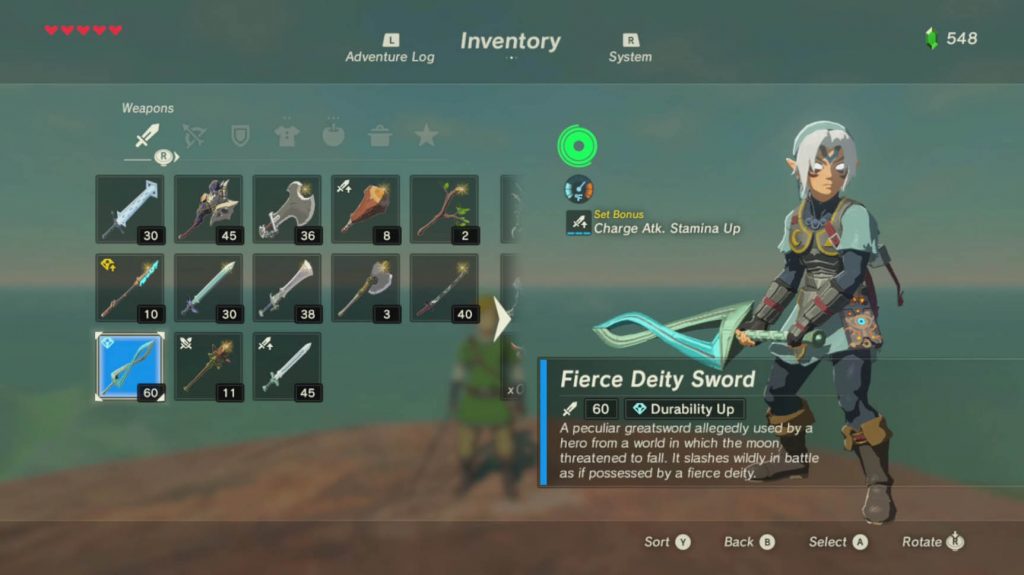 To get this awesome costume set, all you have to do is scan the Link Majora’s Mask amiibo from the Legend of Zelda: 30th Anniversary series for random treasure chest drops. Each amiibo can only be scanned in one time each day, so it may take some time to get the entire set.

Armor of the Wild

The final armor in the game is also the most challenging to acquire, for you must complete all 120 Shrines scattered throughout Hyrule. As with the other classic Link costumes above, this set contains three items: the Tunic of the Wild, Cap of the Wild and Trousers of the Wild. After you’ve completed all the Shrines in the game, a new side quest will unlock which points you to a location called The Forgotten Temple. Once there, three chests will appear before you which contain this amazing set!

While not technically a classic Link costume, the Sheik costume is still an excellent throwback to Ocarina of Time. In order to obtain this outfit, you will need to do two things. First, head to the tailor in Kakariko Village and purchase the Stealth Tights and Stealth Chest Guard. Once you’ve acquired these, bust out your Sheik amiibo and start praying! The Sheik amiibo has the rare possibility to drop the Sheik Mask. When combined with the items from Kakariko Village, you have a fully functional Sheik outfit!