The Super Nintendo is home to some of the finest RPG experiences, a handful of which we’ve already shared with you in the other articles included in our Super September series. Personally, my childhood was made up of a trinity — or would that be Triad? — formed by Chrono Trigger (not present on the SNES Classic, sadly), EarthBound and today’s title as the shining examples of the genre. These titles were released back when you couldn’t Google info about upcoming games and before I became a subscriber to Nintendo Power, at that age when a game’s box art was the best means of grabbing an initial audience. When it comes to Legend of the Seven Stars, the huge sword sticking out of a castle was more than eye-catching — and I don’t know if you noticed, but something looked very, very different about Bowser, Peach and Mario in the art. 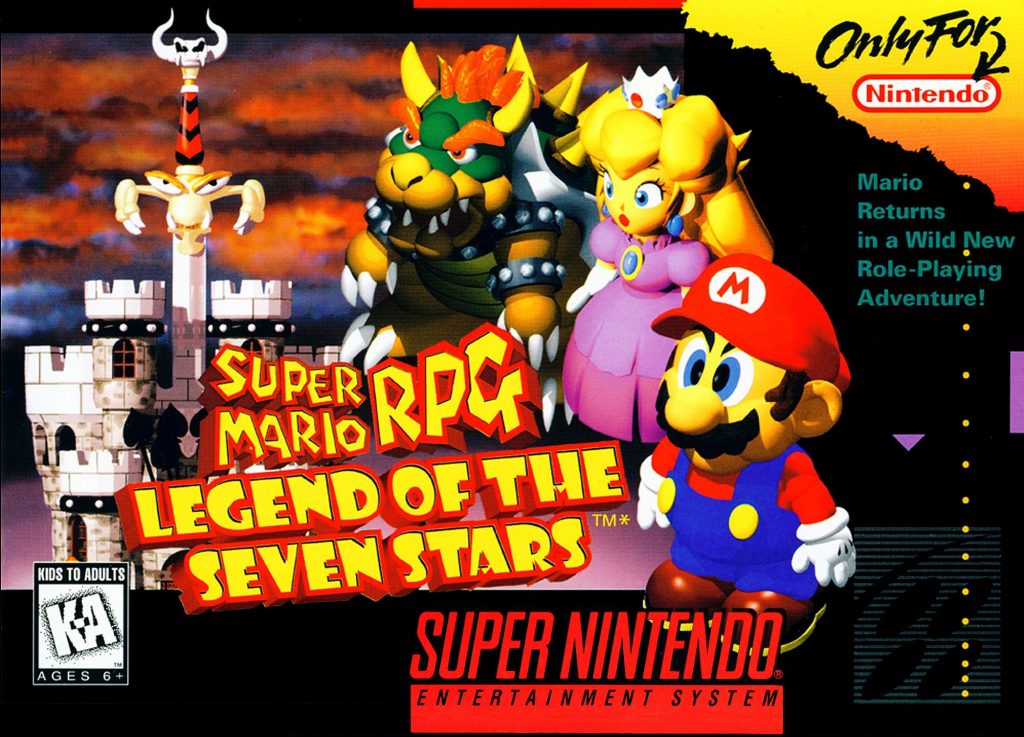 That was only the beginning of how this installment surprised Mario fans. How crazy was it that the game opened with storming Bowser’s Castle and taking on the Koopa King himself? Or that later on that same nemesis would join up with Mario (or rather conscript him into the Koopa Troop) to try and take back his castle from Smithy and his gang? This was the first time ever that Bowser was on Mario’s side, and to me that was something unfathomable. Princess Peach Toadstool got in on the action as well, and while it may not have been her first playable appearance, it gave her a headstrong personality, proving she was willing to take action for her kingdom after one too many kidnappings. These subversions, along with the unique visual style for them and other familiar Mario characters and ideas, were mind-blowing to me the first time I played through, and they weren’t the only surprises in store for fans like myself.

You can’t talk about Super Mario RPG without mentioning the rest of its party, arguably the real stars of the show. Square introduced a pair of original protagonists to journey with Mario and they’ve endeared themselves to players desperate to see them come back.

First up is Mallow, a living cloud who’s grown up thinking he’s a frog. This crybaby of a character ends up becoming the heart of the party, not only because he’s openly emotional, but because he actually grows, maturing over his game-long character arc. Initially, he’s insecure and unaccustomed to adventuring, an easy target for crafty thief Croco. With a little guidance from Mario, they work together to reclaim his cash and go on to learn about the greater troubles afoot. He’s with you the most out of all the characters with helpful mind, reading and performing magic spells; and even if you swap him out for other characters, he still gets to shine once you reach the cloudy Nimbus Land and learn of his true lineage. He doesn’t always get the greatness he deserves, but seeing Mallow develop into a hero is a highlight of the story for me. 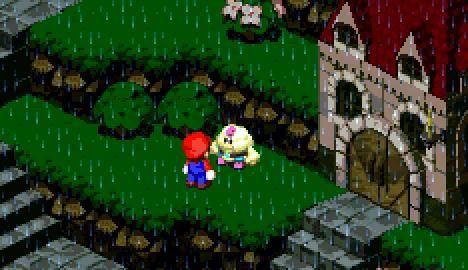 Granted, the real ‘star’ here by most accounts is the otherworldly ♡♪!?. This character takes possession of a child’s wooden doll, adopting its name, Geno, and acting to save the wish-granting Star Road from Smithy. The most common answer to “Who’s your favorite character in Super Mario RPG?” — there’s just something about Geno that makes him stand out. Maybe it’s his overall mysterious nature or the character design itself; or how he’s extra helpful in battle through most of the game, thanks to his high speed and attack power. After all, this is a toy that shoots rocket fists and energy beams at enemies, possessing the ability to harness the power of starlight in his service to a higher authority. Not to mention, Geno’s the holder of the most powerful attack in the game: the Geno Whirl. It takes perfect timing, but this magic can deal out 9,999 damage to most enemies in the game, best demonstrated in one shooting the giant sword Exor towards the end of the adventure.

Maybe I was getting ahead of myself with that last bit. Let’s take a step back and talk about “Timed Hits” for a moment. SMRPG is the game that set the standard for most Mario RPGs going forward, making it the originator of that extra special battle feature. While running and jumping around the overworld was easy enough, and you could battle in standard RPG style of just selecting your command and watching it happen, the game rewarded players for actively participating in combat. When you’d jump on an enemy as Mario, you could hit the attack button again when he made impact, upping the damage and looking flashy doing it. Pretty much every skill in the game had this as a feature, and figuring the skills out and mastering them was part of the fun. It’s easy to gloss over just how fresh and exciting this new method of fighting was at the time, but just as much as the world and its characters, the timed hits technique was an essential part of what made SMRPG truly legendary.

There were plenty more memorable faces and events in this one-of-a-kind version of the Mushroom Kingdom beyond its playable party. The entire Smithy Gang, with its weapon themed designs, made for a great series of boss encounters. The Axem Rangers especially were a cut above the rest thanks to their Power Rangers inspired personalities and methods. Booster Tower may be the best part of the game due to its eccentric man-child master. It all leads to battling a sentient wedding cake and potentially getting a kiss from either the Princess, Booster or even Bowser. There’s also the already mentioned Croco, sunglass-wearing Boshi, pirate captain/shark Jonathan Jones and plenty more — all made memorable by their designs, personalities and sometimes how you faced them in battle. Many of the bosses had specific ways you needed to face them, or ways of interfering with how things work in standard battles. It keeps things feeling new and exciting as you play through, setting it apart not just from Mario games, but from RPGs as a whole. 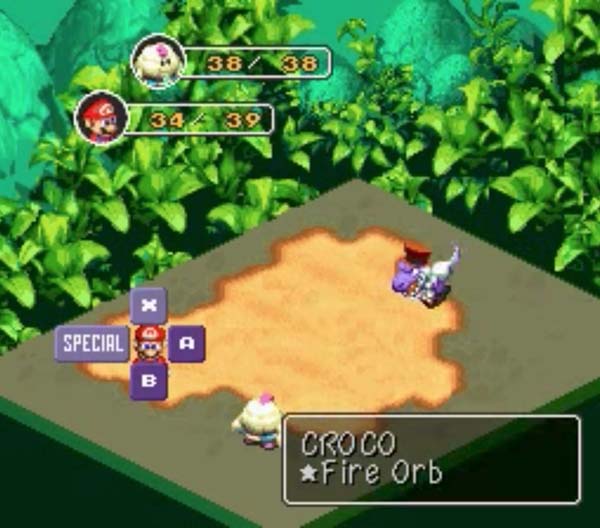 Last but not least, the game’s music deserves your full attention. I already spoke about it earlier this month when talking about another Mario game, but I think it’s important that I reiterate the music’s significance, for it treats familiar themes with a slightly dreamy atmosphere and whimsy. The original tracks are the real winners, with part of Geno’s love probably being the association with the game’s Forest Maze and its incredible music. Booster Tower has a pair of great tracks associated with it, and you better believe you’ll have the game’s battle theme stuck in your head in no time. Yoko Shimomura, best known for her work with Kingdom Hearts these days, gives SMRPG just as much of its identity as the enjoyably embellished localization.

Keeping all of this in mind, I hope anyone who hasn’t given this game a shot does so when the SNES Classic releases. Even with later Mario RPGs borrowing elements from its formula, there hasn’t been a game quite like Seven Stars on the SNES or any other system. For me, it ranks among the best uses of the Mario world, even when placed next to main series games. Even if you’ve conquered Culux plenty of times in the past (and if you haven’t, just wait until you see and hear…), give it a little thought and I’m sure it won’t be long until Super Mario RPG: Legend of the Seven Stars makes all your wishes come true again.