The original Smash is… how many years old?! Wow, the time sure does fly. Super Smash Bros. is what you might call a game whose legacy precedes itself. Most people, Nintendo fans or not, have either played Smash or at least know what it is. It’s a game that is as addictive as it is fun, and a game that lives in the hearts of many.

To me, the original Super Smash Bros. was a gateway to discover other Nintendo properties that I have not sunken my teeth into yet. I’ve spent a lot of time over the past couple days reflecting on how that game affected me growing up. The N64 was my first console, and I got into it rather late — like, 2003 late. The GameCube had already come out, but my parents were finally allowing me to get a console, and the N64 was the one I wanted and, to no one’s surprise, Smash was my main draw. I played it a few times at my cousin’s house, and just from that I was hooked.

At this point in time, I had never played a Metroid game, a Star Fox game, or even a Zelda game — I only knew their respective characters from Smash and never knew they even had their own titles. Regardless of this, I grew to like these characters a lot, and even grew to despise some (simply for always beating me). I always thought swordsman were cool, so when I found out that Link actually had his own series of games, I was set on trying them out for myself. I never got the chance to try Ocarina of Time… instead, I started my first journey in Hyrule with Twilight Princess. My favorite level in Smash was Sector Z with the Great Fox, and after countless hours of battling aboard the legendary ship, I wanted to finally play the title that inspired it: Star Fox 64. To this day, Star Fox and Zelda hold a very special place in my heart, and it’s thanks to Smash that I even had any interest in playing them at all. 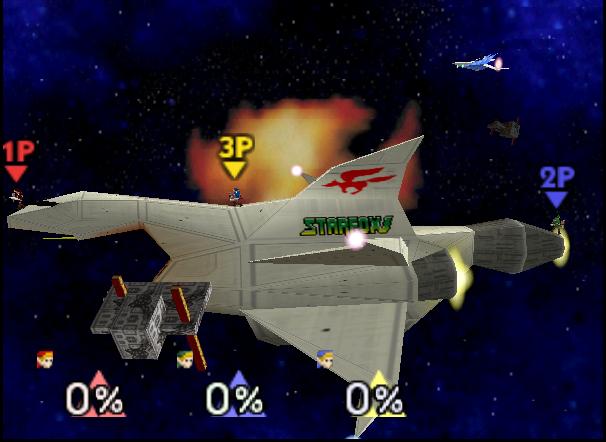 Over the years, Smash has been my go-to game for helping new groups of people break the ice with each other — it’s the perfect party game. Smash’s mechanics are easy enough for a newcomer to understand, but deep enough for a pro to master. It has something for everyone, casual and competitive: you can have an intense one-on-one match on a Final Destination-style map with no items and Fox only, or you can have some laughs and yell at your friends in a chaotic 8-player free-for-all match with high item spawn. The game is flexible enough so anyone can have fun playing it.

Smash continues to dominate the landscape when it comes to player excitement. People get absolutely hyped when a new Smash game is revealed, and they go completely bonkers when one finally releases.

I was in college when Super Smash Bros. for Wii U & 3DS was released, and it was total madness at my university. The school had a game lab where students could have access to games for recreation or research. This place was completely packed when Smash for Wii U came out. Everyone, and I mean everyone, was playing Smash. There were only two Wii U consoles in the room, and they were always busy. However, only having two consoles to play on was a good thing in a way because students were forced to share their time and play with others they might have otherwise not interacted with. Smash has the incredible power to unite people from different studies and backgrounds under the banner of knocking each other out. Funny enough, the sight of it was heartwarming to watch unfold.

The original Super Smash Bros. turned 20 years old yesterday. That’s still a little hard for me to digest, honestly. The game has gone on to lead a highly decorated legacy that many developers can only dream of their games achieving. The fact that Smash has managed to stay relevant over the last two decades is an achievement in itself, and a testament to the original game’s success, as well as the continued hard work that Masahiro Sakurai and his team have put into each entry of the series. The later entries in the series continue to capture the hearts of new players while making old fans fall in love with Smash all over again.

Here’s to a happy 20th birthday!