Is it just me or has the world gone bananas for retro video games? You got a sealed Mario 64 selling for over $1.5 million, an original Zelda going for over $800,000, and games in pretty much every major retro franchise are selling for two to three times what they were just a year ago. While I completely understand speculators and game collectors alike snatching up NES, SNES, and N64 games in hopes of getting some sweet, sweet gains, one thing that baffles me is what’s happened to the 3DS market. The 3DS is far from retro, with Nintendo only stopping support for it just two years ago. But, nonetheless, prices for used 3DS consoles have reached absurd new heights. 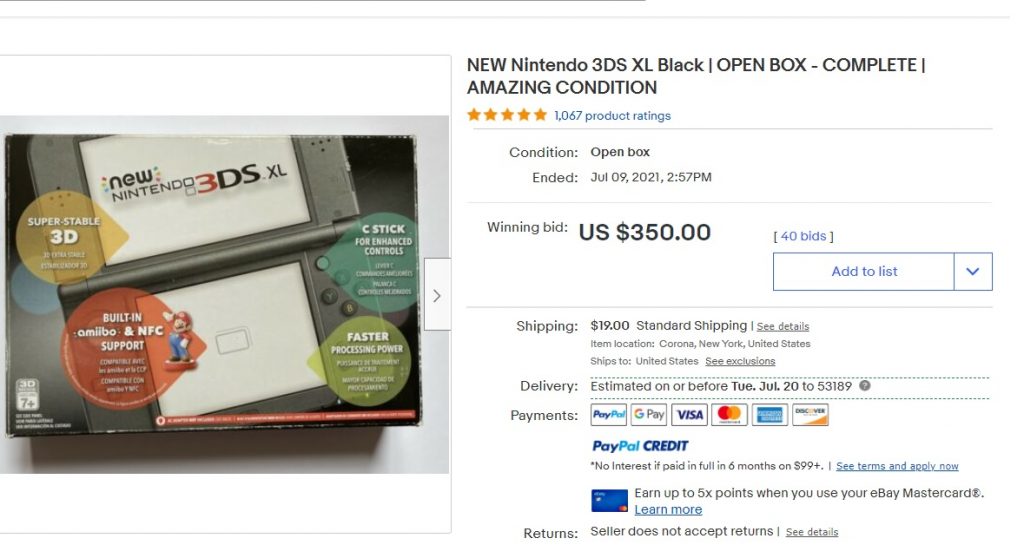 According to pricecharting.com, the price of a generic 3DS XL (standard, not the “New” edition) has climbed to nearly $200, nearly tripling in price in just over a year. If you’re all about that New life, a generic New 3DS XL is coming in at an average of $233 with the box. Even the original model of 3DS isn’t safe from the inflation. A used aqua blue 3DS coming in at a staggering $132 in loose condition at the time of writing, which is over double the price in the pre-pandemic market. Keep in mind, these are the boring and generic colored consoles, too.

Things get even crazier when you factor in the limited editions. Just for fun, let’s look at some of those prices, shall we?

So what the heck is happening here. Why is one of the most mass produced pieces of Nintendo hardware selling for such an inflated price? Like all things crazy over the past year and half, the answer likely lies with the pandemic. In fact, looking at Price Charting’s historic pricing data we see a familiar trend with nearly all 3DS consoles. The prices started to spike immediately after the lockdown began.

With life slowly starting to get back to normal, will we see these prices start to fall? I would imagine at least some will. But judging by the current state of the retro game market, anything could happen.