As anyone who’s ever wiggled their way out of a giant worm before knows, last year’s plucky platformer, Slime-san, was one of the finest games to jiggle through the genre. Since then, developer Fabraz has been dipping its toes in the publishing sphere, starting with Eeendhoorn’s aptly titled fantasy sports game, SpiritSphere DX.

But is it worth pumping your Switch with $10 worth of quarters? Having spent the better part of my weekend being both assaulted by said spheres and royally served in Mario Tennis Aces, I can safely report that the former has more than earned its rightful place in Nintendo’s pantheon of play chests. 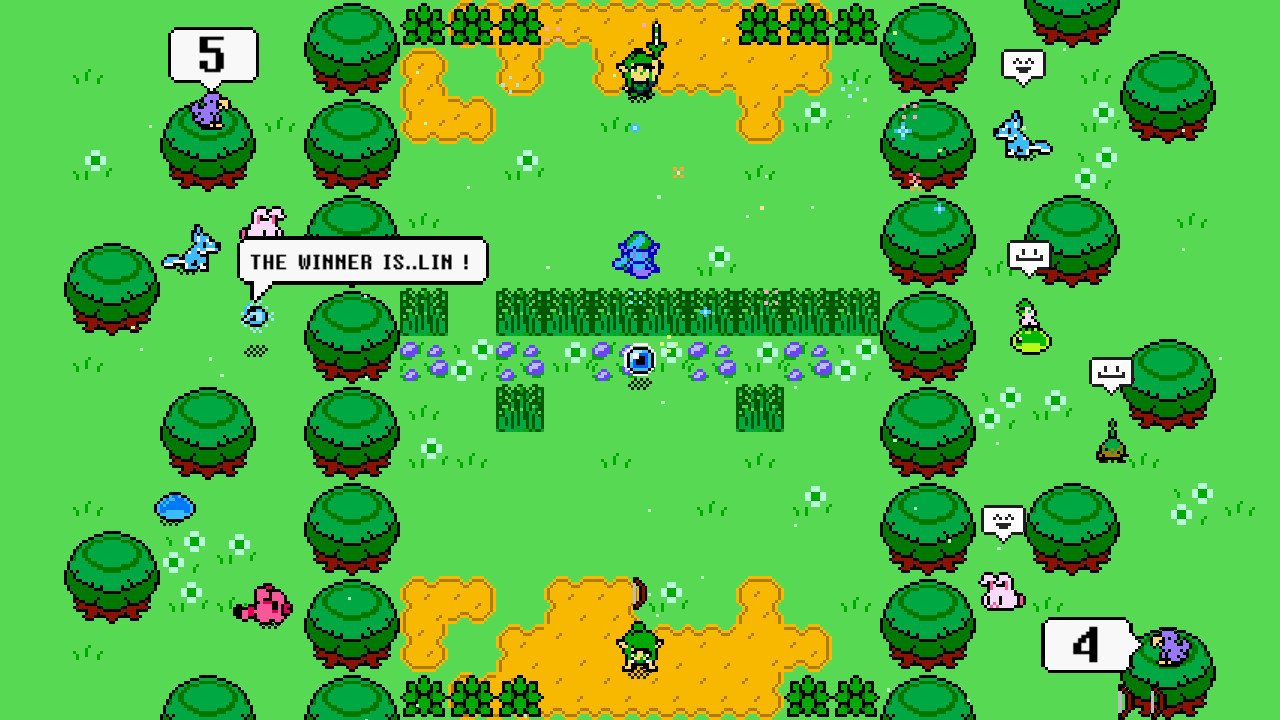 The first thing you’ll notice when gearing up for a magical beatdown is the game’s familiar, yet delightfully retro aesthetic. Each perfectly placed pixel is heavily influenced by 8-bit Zelda adventures of yore, with lush environments and colorful sprite work that’d feel right at home on the Game Boy Color. Addictive chiptune tracks and sound effects complete the ensemble — jumpy and energetic, but never overbearing.

Gameplay is rooted deeply in classic arcade mainstays like air hockey and Pong, though with more personality and much deeper mechanics. For starters, players are given three attack inputs — basic, special, and quick dash — requiring a good handle on each to slip spheres past your foes. Multiple playable characters round out the roster, each with their own set of unique abilities — from orb slingling magicians and axe wielding dwarves to an (adorably) blue-coated kitten named Buster. Mastering each one’s quirks is a breeze thanks to tight, responsive controls — ensuring players have nobody to blame but themselves for each misplaced strike and failed volley.

Just as important as a cast of kooky characters to choose from are the variety of stages they get to duke it out in. While there’s only a handful to choose from, they thankfully come in all shapes and sizes, not to mention they’re packed with plenty of environmental hazards to avoid. Shifting lava plumes, bone tossing skeletons, and unkempt shrubbery are just a few you’ll need to watch out for. The eponymous spheres themselves can take various forms too — sometimes larger, sometimes faster, yet always frantically ricocheting across the room with deadly aplomb. 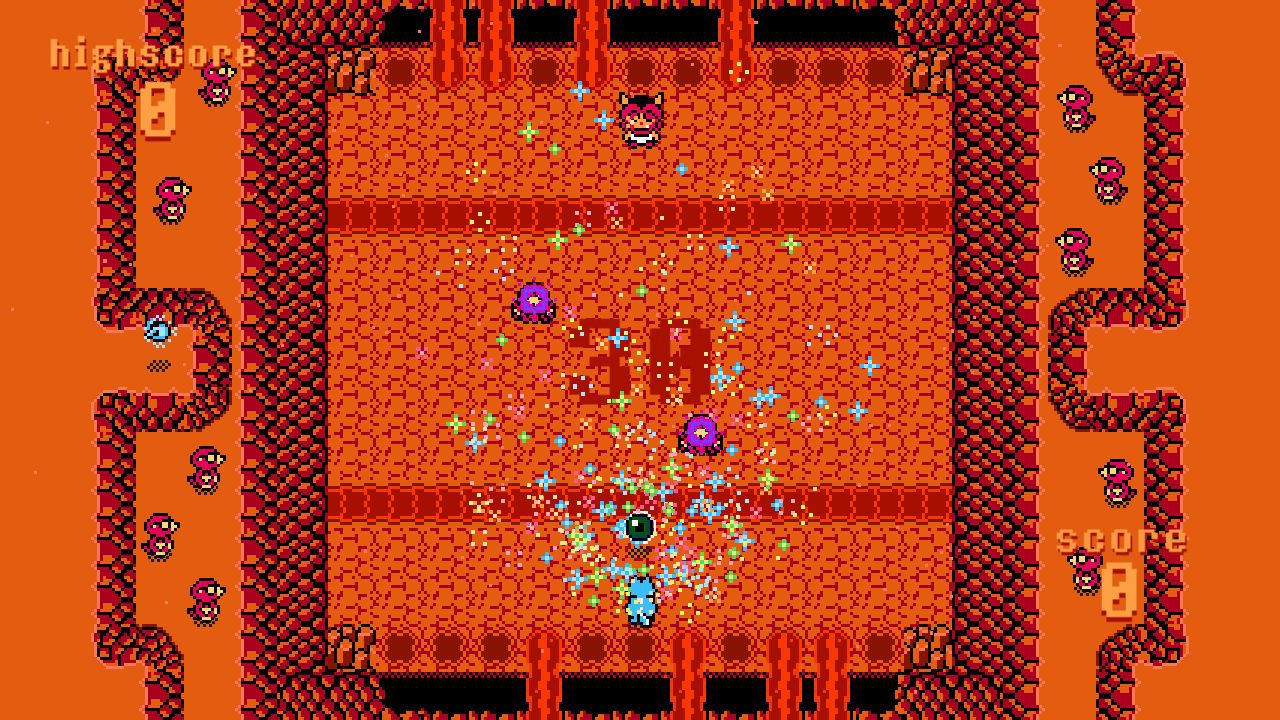 Those looking to take on the good fight solo might be a little disappointed. The single player campaign runs pretty short, with only ten randomly generated stages taking anywhere from 10-20 minutes to run through. Think Smash Bros.’ Classic Mode, only you’re smacking around floating orbs instead of each other. As far as narratives go, it’s about as barebones as the skellies running amok in stages. Characters each have their own paper thin motivations for embarking on this most cosmic of quests, from rescuing kidnapped damsels and protecting homelands from evil to a simple infatuation with the sphere’s yarn-like look. (Seriously, get it together, Buster!)

Fortunately, what SpiritSphere lacks in the single player arena is more than made up for by its many multiplayer modes. Squash plays much like the game of the same name, with two players taking turns whacking balls at the same wall until one either misses or performs out of turn. Boss Mode has two players team up against a single, over-sized monstrosity big and bad enough to rival Hyrule’s demonic Pig King himself. Then there’s Target Mode — a no-holds-barred time attack where two players cooperate to rack up points by striking enemies and objects on screen. 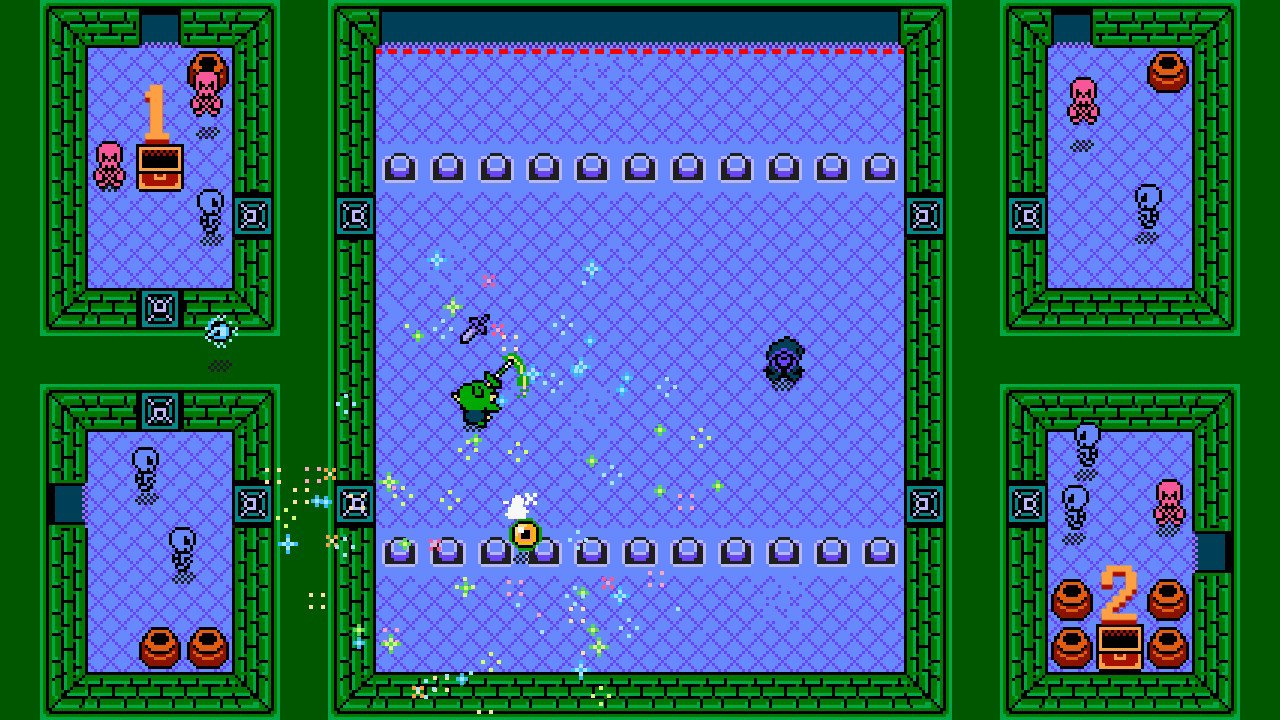 Though without a doubt the greatest mode to grace the Nintendo Switch is Hand2Hand, which shifts the action vertically, forcing both opponents to man a Joy-Con at each end of the console while undocked. There’s something particularly thrilling about two rivals making scrutinizing eye contact while in close quarters combat. (And no, it’s not just the fear your newfound friend on the NYC subway might accidentally drop and shatter your Switch into a million pieces.)

Ultimately, SpiritSphere DX proves perfect for scratching that arcade itch on Switch. The action’s fast, multiplayer is frantic, and simple gameplay mechanics are perfectly suited for the console’s pick-up-and-play nature. Peddlers of Pong especially owe it to themselves to snag this spirited sportsball battler — especially now while it’s a few bucks cheaper for pre-purchase!