Few genres have played such a pervasive role in my gaming upbringing as the plucky platformer. From seasoned staples Mario and Mega Man to more modern mascots like Meat Boy and Shovel Knight, these seductive side-scrollers have become a kind of comfort food that helps nourish my soul after a hard day’s work, in large part due to their accessible antics, reflex-driven gameplay and penchant for punishment. (Okay, that last one probably doesn’t make much sense to most people, but I’m admittedly a complicated guy who flourishes in frustration.)

Enter Slime-san: a twitchy, lightning-quick quest that shamelessly digested its way into every fiber of my being. More than just a clone of platformers past, the quirky caper takes just enough inspiration without compromising its own bizarre identity, culminating in one of this year’s finest breakout indie hits. Outside some mildly questionable pacing issues, anyone brave enough to boldly bounce where the sun don’t shine is bound to spend countless hours engulfed in its endlessly goopy glory.

A BIRD AND HIS BLOB

Players slip into the membrane of a sentient slimeball named Slime-san – nature lover, happy husband and faithful father of three – who, alongside his feathered friend, literally ends up as worm food the moment you press start. The unfortunate demise of our wayfaring wad is not only delightfully grim, but serves a narrative backdrop for the entire gameplay enterprise as you jump, slide and slime your way through hundreds of obstacle-laden digestive tracts, all the while avoiding a rising tide of the relentless invertebrate’s deadly stomach acid. 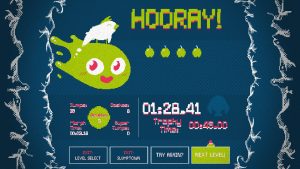 Slime-san’s crayon-colored aesthetic is nothing short of breathtaking, thanks in large part to its five-color pixelated approach that really helps the game world pop. Despite the unfortunate side effect of making each of its five frenetic-filled worlds visually indistinguishable from the last, this seemingly paltry palette serves a vital purpose from a design perspective that more than justifies neglecting the old adage ‘form over function.’ Color serves as visual cues to help designate hazards and safe zones, effectively eliminating the need for lengthy tutorials and their tendency to bog down the action. Developer Fabraz would rather you dive slime first into all manner of morbid monstrosities and learn from your mistakes than coddle you, and the experience is all the better for it.

Composed by an all-star ensemble of contributing chiptune masters, Slime-san’s highly addictive beats kept these toes tapping well throughout my regurgitative journey to hell and back. The superlative soundtrack has a distinct Mega Man 3 vibe to it, from Richard Gould’s somber, yet energetic slowburn “Mighty Mama Earworm” featured in the opening sequence to the funky fresh synths of George Shaw’s early stage masterpiece, “Wormhole.” Best of all, each track title is a fun mix of slimy puns and plays on words, with gelatinous gems like Mixtapeworm and Uvula’s Groovula in particular plastering a permanent smile on my face.

The most vital aspect to any platforming great is the sense of command you have over your adventurous avatar, and in that sense, Slime-san absolutely excels. Tight, responsive controls make sliming a snap, especially when coupled with a host of unique abilities for seamless traversal of the creature’s encroaching entrails. Along with his standard pouncing prowess, our slimy savior comes packing incredibly handy dash and phasing moves – the former of which lets you speed and smash through obstacles, while the latter slows down time and allows for sifting through the game’s many green-tinted surfaces. Combine all that with sticky wall slides and well-timed double jumps, and you’ll find yourself making quick work of even the most daunting of platforming challenges. 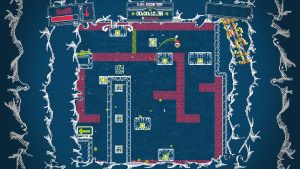 Mastering the game’s fluid movement is vital should you wish to worm your way through all 400 stages intact. What briefly starts as a leisurely bowel movement through familiar platforming perils quickly ramps up to a death-defying, diuretic rush of clever curveballs and increasingly challenging puzzle elements. Beyond the expected perilous pitfalls and moving platforms you’ll witness the likes of trampoline-mounted turtles, tumbling tetromino blocks, wall-mounting waterfalls, lethal lasers, shifts in gravity and so much more. Some of my favorite stages included elements inspired by the Donkey Kong Country series, like blasting between bouncing barrel launchers and flapping through hazardous wastelands alongside your squawking animal companion.

Most intriguing, though, are the excellently crafted boss battles tail-ending each world, providing some of the most challenging and whimsically comical moments the game has to offer. From hard rockin’ uvulas and laser-laced brainiacs to the wriggling mad menace herself, snuffing out the life force of each adrenaline-pumped organ is a welcome test in skill, patience and pattern memorization. Bottom line, and some pacing issues and irregular spikes in difficulty aside, the sheer variety in stage design never once ceased to amaze, oozing its creative juices forth with each gentle squeeze of death. 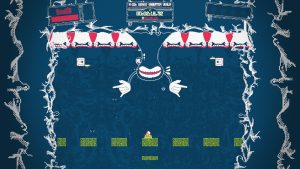 Make no mistake, fellow slime sacks: this game will mercilessly chew you into a gooey pulp and spit you out of every bacteria-infested orifice when given the chance. Unsurprisingly, death comes swift when gallivanting through the abdominal cavity of a maleficent monster, with a single hit resulting in our digested daredevil becoming worm chow. Fortunately, outside a single instance of significant frame rate dips, it rarely feels unfair thanks to the superb control scheme and quick turnaround time between taking an acid bath and jumping right back into the action.

Supersizing the smorgasbord of content on tap is the addition of collectible apples saturated throughout each menacing stage. Typically hanging slightly off the beaten path and requiring complete mastery of the bouncing blob’s many nuanced mechanics, these fanciful fruits can be used as currency to unlock alternate side panels, mini-games and dapper costumes in Slumptown’s bustling bazar: a hamlet of malnourished misfits also swallowed whole and bested by the ever-gluttonous beast. More importantly, however, is the option to swap slimes sporting alternate playstyles, like the ability to jump higher, walk faster or dash further at the cost of various other physical traits. While I personally never felt the need to drift too far from the default setup, it’s nonetheless a fantastic way to beef up an already deep adventure bursting at the seams with post-game goodies. 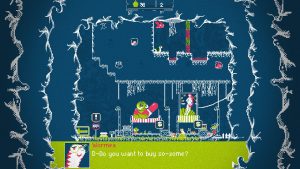 Of course, the platforming practiced among us who seriously want to sift through the slime can further test their mettle with devilishly difficult time trials, speedruns, boss rush modes and even a New Game+ option that remixes each slime-soaked screen with even more challenging obstacles to overcome. In fact, those confident enough in their slime sliding skills (or simply looking to test the durability of their Switch against hard, distant surfaces) need look no further than speedrunning the full 400 stage campaign without losing a single life for the ultimate fix in frustration – an accomplishment I wholeheartedly hope to achieve at some point in my meager, soon-to-be mucus encrusted future.

SLIME FLIES WHEN YOU’RE HAVING FUN

Toss all notions of Slime-san being just another Meat Boy clone back in the grinder: this highly inventive platforming prodigy deserves every second in the slime-light it can get. What it lacks in originality is more than made up for by clever level design and enough heart as large as the intestinal prison you’ll likely spend hours trying to escape. 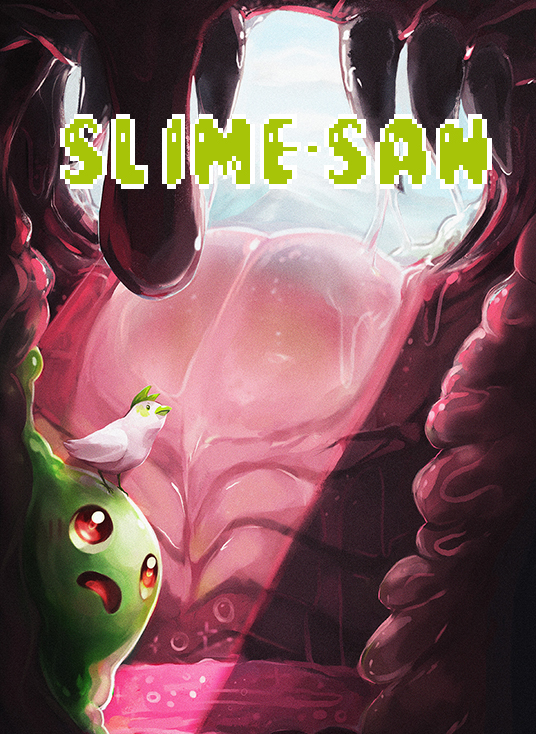