Please keep in mind that this impressions piece is based on the Japanese Sonic Forces Demo, which is currently only offered in the eShop specific to that region.

I’ve always classified myself as a Sonic superfan. I’ve played every main game, most of the spinoffs, read all the comics, and even seen the good ol’ saturday morning Sonic cartoon. I loved Sonic Mania earlier this year, but I’ve always fancied the Modern Sonic titles for their moments of brilliance among the muck of disappointment. Truthfully, I’ve been really worried about Sonic Forces. I played it back a E3, and while I enjoyed it, there were several glaring issues that made me worry Forces would be tossed on top of the pile of forgettable Sonic titles. After playing the demo released on the Japanese eShop Wednesday, I can go forward with more confidence that Sonic Forces will be an enjoyable experience — that is, if you’re willing to overlook some shortcomings.

The demo only allows 60 seconds of roaming through the new desert-infused Green Hill Zone as Modern Sonic. The level sample is split between 3D sections and side-scrolling parts, the style we’ve seen in Sonic Unleashed, Colors and Generations. This being the first game to use the new Hedgehog Engine 2, I spent most of my runs just experimenting with how Sonic now functions in his new environment.

First of all, Sonic’s acceleration is not linear up to top speed, as it was in previous games. There’s one big increase in speed that happens about halfway into the acceleration process, when Sonic throws his arms behind his back. 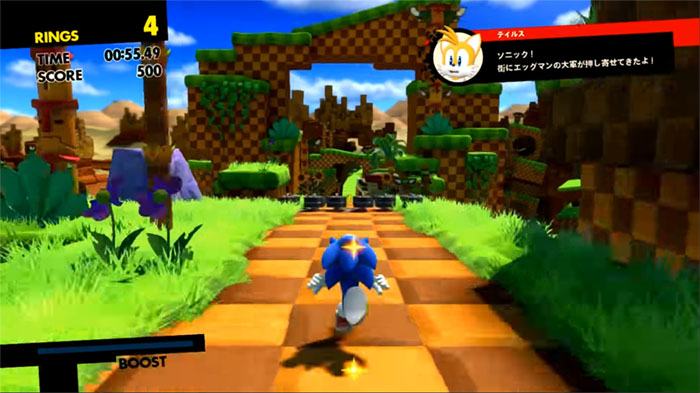 Sonic possesses a similar double jump to what he had in Sonic Colors. This means when an enemy isn’t being targeted for a homing attack, Sonic will simply do another short bounce in the air instead of getting a nice boost forward. This made gaining momentum very difficult. For example, after chaining homing attacks together on a group of enemies, your only option besides immediately boosting is to fall to the ground and start your run from scratch instead of keeping your speed going from the air.

It’s also worth noting that the jump completely kills all of Sonic’s speed. When I was flying down a path and chose to jump over an enemy, Sonic landed and essentially had to start his run from square one. This is even worse with the double jump, where Sonic almost stops on a dime after landing. 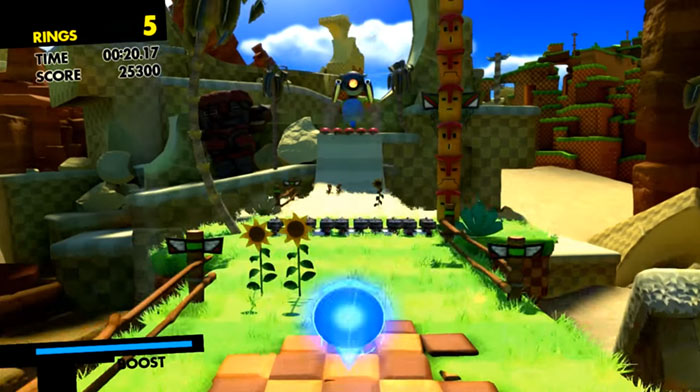 The homing attack felt as it has in past games. It’s still very satisfying to plow through enemies in the air. The boost also felt very similar to recent games, with one large improvement: Sonic can now jump during his boost to much greater effect than before.

One other issue I faced is that moving Sonic left and right while running forward is very difficult using the stick, and it was much more effective to use the shoulder buttons to sidestep to the left or right. Sometimes, it felt like Sonic couldn’t even budge side to side, like when he was collecting a straight line of rings.

These complaints all come from having poured countless hours into previous boost-era Sonic games. Aside from losing momentum on jumps and turning left and right, my other comments will likely subside as I get used to the new way Sonic controls.

The custom hero level proved to be more fun than I expected it to be. As we’ve seen before, the new avatar character uses a grappling hook and various weapons to make it to the goal. There are multiple ways to get through the level featured in the demo depending if you choose to use the grapple or not. It’s a fairly simple mechanic, but the spectacle looks cool enough to keep me engaged. 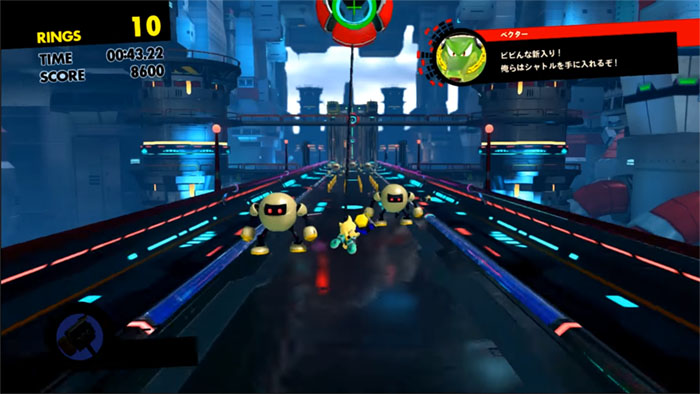 Actually, that’s how I feel about the entirety of the custom hero experience. The level is crazy easy, especially if you spam the weapon to kill every enemy in mere seconds, but there’s enough going on on-screen that kept me interested throughout the whole level. Will that be sufficient to hold my attention throughout the entire game? We’ll have to wait and see.

Speaking of weapons, there are three you can choose in the demo. Fire, thunder and the cube power. All three are incredibly OP, and you can waltz through dozens of Eggman’s bots without getting a single scratch.

The custom character controlled fine, but faced the same momentum issues I detailed above with Modern Sonic. As I ran through a frozen Chemical Plant, my hero often stopped right as I was beginning to get mesmerized by the level, causing a jarring exit from the experience. 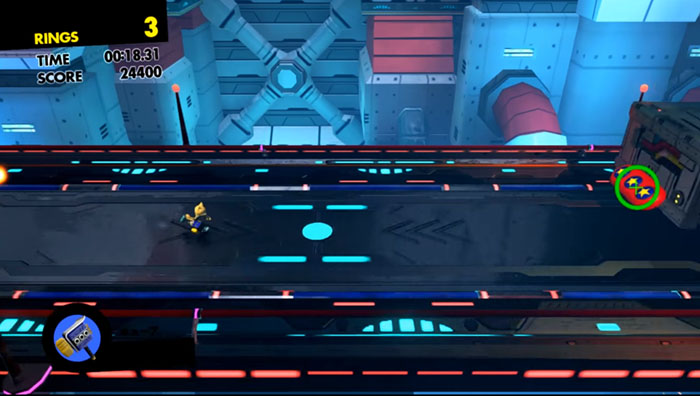 The Classic Sonic level is the same boss fight we saw at E3. He controls largely the same as he did in Generations, but with the added drop dash mechanic from Mania. The controls feel good, but not as tight as I became accustomed to with Mania.

At E3, the crumbling city Sonic sprinted through struggled with frame rate and looked blurry, especially in handheld mode. In the levels featured in the demo, at least, I can say performance was not an issue at all. The game performed fine, even when boosting through rings and enemies as Modern Sonic, the most graphically intensive part on the demo.

The game is also much clearer than it was back in June. Objects look more defined, even way back in the horizon. We were told by a Sega representative in June that it was an early build of the game, and I’m glad Sonic Team was able to polish Forces into a much prettier, more playable experience. 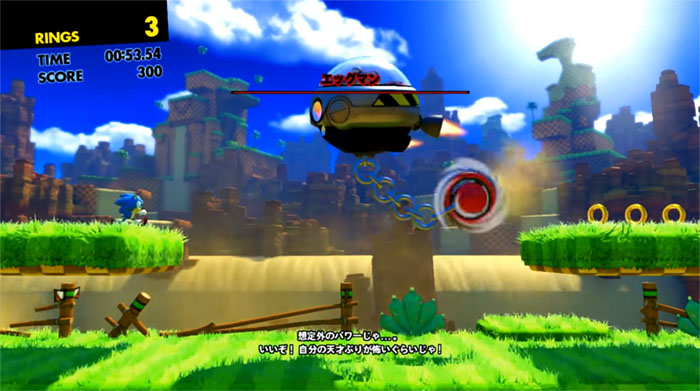 Sonic Forces is in way better shape than it was the last time we went hands-on. There are some minor physics issues, but I feel much better about the game going forward, and I’m excited to play the full game in a couple of weeks.