Impressions: Deltarune is (and isn’t) exactly what you’d expect from an Undertale followup

Undertale is a special game. It will undoubtedly be remembered as one of the greatest and most impactful games of the decade even years from now, and already its influence is being seen in other indie gems like last year’s Wandersong. Even if the occasional bellyacher has a gripe with it, it’s arguably — in fact, almost certainly — the most iconic single-player indie game ever made.

Yet as the years ticked by, and murmurs began to abound about Toby Fox’s next project, I felt an inescapable, effusive hope that whatever he made next, it wouldn’t be related to Undertale in any way. The game covered its subject matter neatly and flawlessly — why potentially muddle what’s already perfect? So when the cryptically-announced and released Deltarune emerged, I was… well, excited, obviously… but also a little miffed and worried. Could the spirit of Undertale be recaptured again? Would it be — like so many sequels — a basic rehash that loses all of the magic?

My worries were somewhat founded, but I underestimated what exactly the nomenclature of “Undertale followup” meant. Deltarune isn’t a sequel or a prequel. Nor is it a spiritual successor. To speak of what it exactly entails is almost in itself a spoiler. So to the curious and unknowing: if you’ve played Undertale, there’s absolutely nothing stopping you from downloading this first chapter for free. If you haven’t played Undertale… well, you could try Deltarune, but without the context of the former I would imagine the latter would be far less interesting. Regardless, you should probably play it for yourself if you hold any interest in it, as it’s an experience best left untainted. But to those who don’t particularly care, or just want to see one milquetoast dude’s thoughts, then read on. 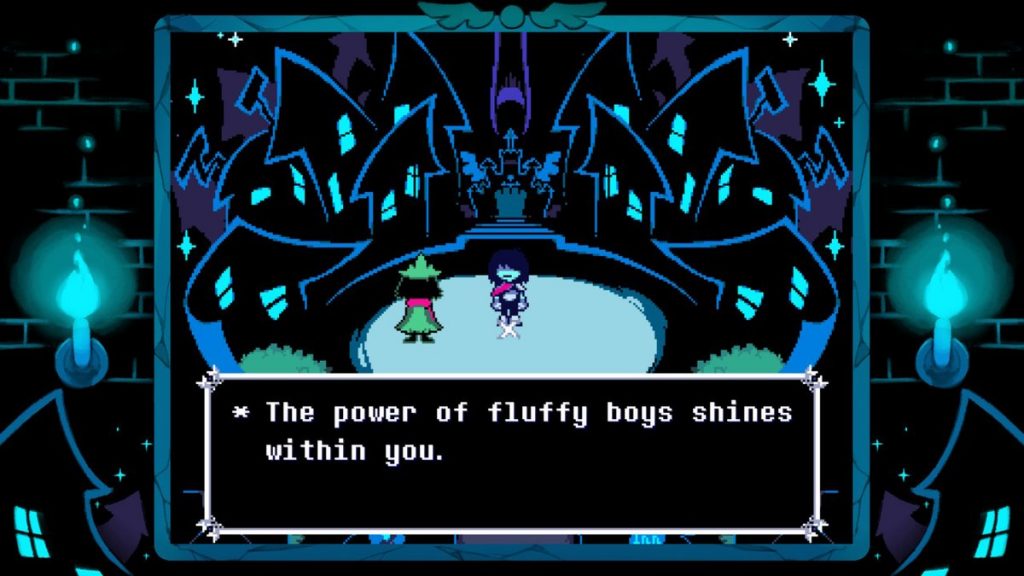 True to its anagramic title, Deltarune is basically an “alternate universe” telling of Undertale… maybe. It’s a little unclear just how the two titles relate, honestly. Deltarune contains all of the important characters from its predecessors, but in a different context and setting, and focuses more on new additions to the cast. Whether it’s some sort of elaborate simulation or strange sequel is yet to be seen, but understanding what Deltarune is trying to do relies wholeheartedly on a good knowledge of what Undertale consisted of.

Deltarune stars Kris, a different kid in a striped shirt, who attends school and lives a typical protagonist life. After a run-in with the school terror Susie and a mishap in a supply closet, they tumble down to an underground world of light and darkness, where they are told by a fluffy prince named Ralsei that the three of them are destined to save the world. The setup is purposefully more fantasy and generic than Undertale’s, but hits a number of similar beats — while raising a thousand times more questions. 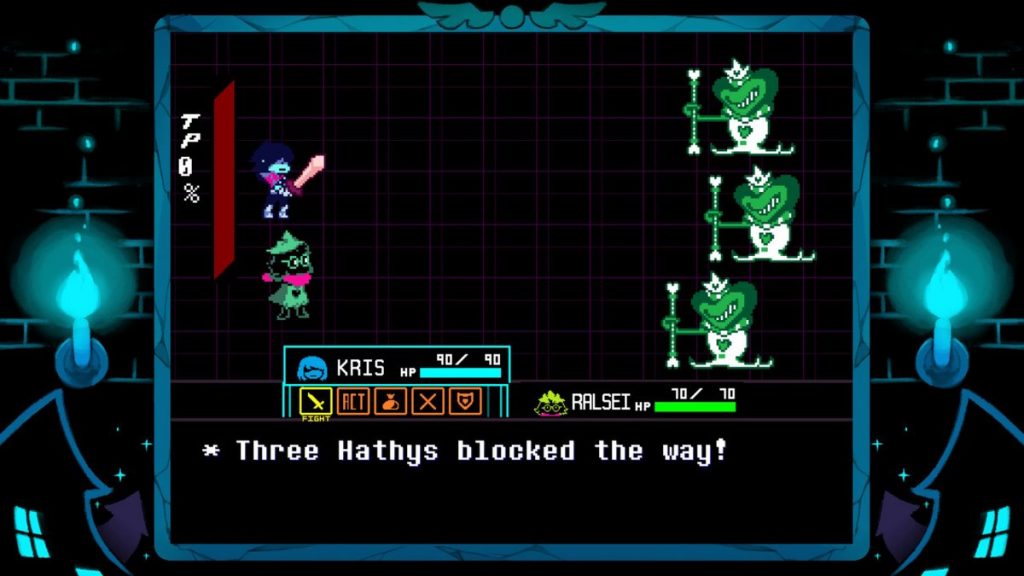 If there’s one thing that Deltarune simply does better than its predecessor, it’s the battle system. Undertale’s was effective yet simple, a combination of straightforward actions and bullet-dodgy defense. Here Fox and co. have expanded your roster of party members to allow actual strategy to come forth — allowing you to do dual ACTs (kinda like Chrono Trigger, only in that you defeat your enemies with kindness) and plan moves to combo together in the same turn. The new TP (Tension Point) system not only offers a great incentive to defend, but a bonus for playing on the edge, as scraping by enemy bullets will boost your gauge and thus make it easier to pull off magic and skills. It’s still not particularly complex, but the infusion of just a little bit of strategy makes the battles already ten times more engaging and interesting.

As for the story, it’s basically impossible to assess where Deltarune’s plot will go at this point in time, but a lot of the same bones that made Undertale so charming are still intact. Character writing is strong, jokes come often and warmly, and the beating heart of humanism that lurks beneath the code beats strongly. Despite being only “Chapter 1,” there are arcs, character development, and a real sense of growth.

Yet the thing that made Undertale most effective — its direct, honest assessment of the player’s actions — is explicitly defied. The game directly tells you that “choices don’t matter.” Whether you fight or act as a pacifist appears to not affect the ending (at least for the moment). While I appreciate that the devs aren’t simply repeating the same lessons as last time, I’m left wondering what theme this game will vie for. Is it as simple as being an antithesis for what Undertale said? Or will there be something clever and deeper as the game goes along? I can’t say for certain.

If there’s one thing that worries me about Deltarune, it’s that it appears to be leaning more into the arcane meta-questions and mystery boxes than a thematic cohesiveness. While the former was definitely present in Undertale (as the 12 million videos on D.W. Gaster will tell you), they never particularly interested me, and certainly were never as engaging or impactful as the themes and ideas presented in the plot. Speculating about how the two games relate is certainly fun and engaging at a time when we have no idea what the rest of the product will look like, but revealing some sort of diegetic tell-all would — in my opinion — be the most boring thing the game could do. 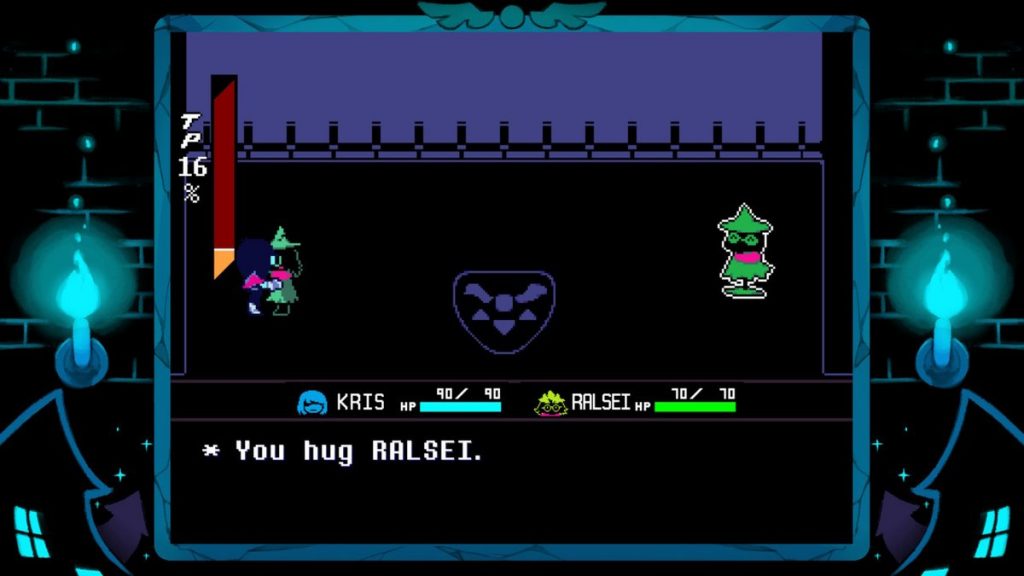 That’s a proportionally small (if pervasive) fear in comparison to all the game gets right, of course. The EarthBound-y flavor text is on point. The demo’s secret boss is a great fight full of challenge. And the music stills slaps — even Laura Shigihara (the genius behind the soul-shattering melodies of “To the Moon” and “Finding Paradise”) sings the game’s credits track. While it’s impossible to rate given its incompleteness, it is without a doubt one of the most solid RPGs I’ve played since… well, Undertale.

And when I was playing Deltarune for the first time, back in October on PC, it really did feel like playing Undertale again — falling in love with the characters, dancing to the new songs, striving at all costs to resolve things by sparing rather than with violence. And I can only hope that the full game engenders more of that feeling, even if I doubt it will ever be able to fully match the joy and greatness of the first one. Yet I cannot help but wonder if it’ll veer off in a different direction, opting for less ‘nuanced ludonarrative’ and more ‘theory generator’.

But if anything, Deltarune isn’t exactly what you’d expect from an Undertale followup. It avoids the sequel pitfall deftly while being one of the most fascinating and unique “sequels” in the entire medium, something that would likely be impossible to pull off without the earth-shattering popularity of its predecessor. And while the rest of the game may be years away, I’ll be waiting with bated breath to see what comes whenever that little white dog is finished making it.