In the days of the NES, some games could grab players almost immediately. Many of these came from Nintendo, but it’s when things were from outside the house of Mario that they got interesting. Standing at the head of these was a gothic horror inspired series that captured the fright of its setting in the difficulty of its titles, pitting you against one of the greatest villains of all fiction: Dracula.

The Castlevania Anniversary Collection reunites multiple generations of Belmonts to fight back against the night, covering the earliest years of the series. Anyone more familiar with the “Metroidvania” titles will be out of luck here — instead of maze-like castles, you’ll find intense 2D platforming and plenty of enemies and obstacles keeping you away from Death, Dracula, and everything beneath them. Eight full games are included here, handled by the excellent emulators of M2, and among them are a few rarer standouts. Read on to find which games deserve your attention, the ones that can be sidelined, and why the oddest one out might just be the best game of all.

For the most part, the titles on offer can be sectioned off into pairs. The original Castlevania and Castlevania III bring tight, challenging side-scrolling action (with III adding in multiple characters to play as and potentially taking the crown as best of the Classic-vanias); Super Castlevania IV and Bloodlines taking the series to 16-bits, with improved visuals and less restrictive gameplay that loses some of the trademark difficulty; and the two Game Boy offerings that get points just for showing up. To put it another way, they’re welcome from a collection standpoint, but they don’t really bring anything compelling to the table (though they still have their unique quirks). 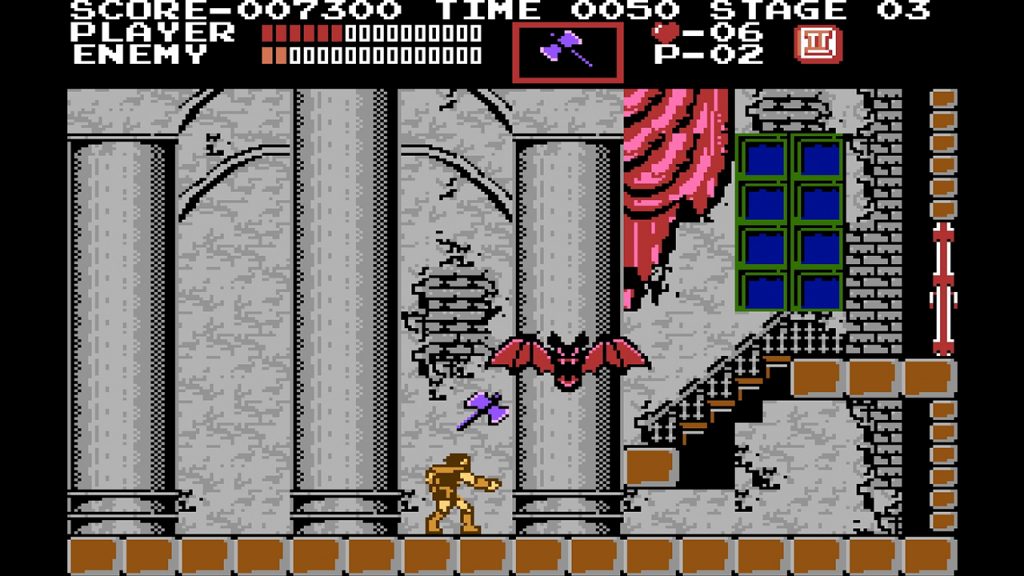 The NES original still holds up incredibly well, though more than any here that could be nostalgia talking. Anyone coming here from Super Smash Bros. Ultimate owes it to themselves to give it a try to see where Simon Belmont and many of the Dracula’s Castle stage elements came from. It’s more than just a first chapter though, standing as a well designed game in terms of platform and enemy placement playing off of your (rightfully limited) capabilities. Castlevania III gets much of this same praise as well, with the added versatility of four playable characters, branching level paths, and improved graphical presentation in the same glorious NES style. If you had to pick only one of the 8-bit titles, this would be the one.

The jump to SNES and Genesis was kind to the series as well, making them gorgeous in a different way and actionizing the feel of them. Movement was a lot more fluid and attacks could be controlled more freely, and stairs were no longer as much of an obstacle. They lose some of what helped make the gameplay on NES feel so tight, but Super Castlevania IV and Bloodlines are both worth checking out. Preferably after experiencing the first game or III, as they build off of expectations and familiarity of the series and it can be a bit jarring to go backwards.

Bloodlines in particular was a pleasant surprise, offering two unique characters that anyone who’s tried Portrait of Ruin on DS might be familiar with and some other deviations from the rest of the series, such as different sub-weapons. Super, on the other hand, is a massive jump graphically. It lets Simon use his whip in new ways, like swinging from certain stage fixtures and flailing it around — you know, just because. It serves as an enhanced remake of the first game in terms of story but has plenty of its own, new experiences to take on. 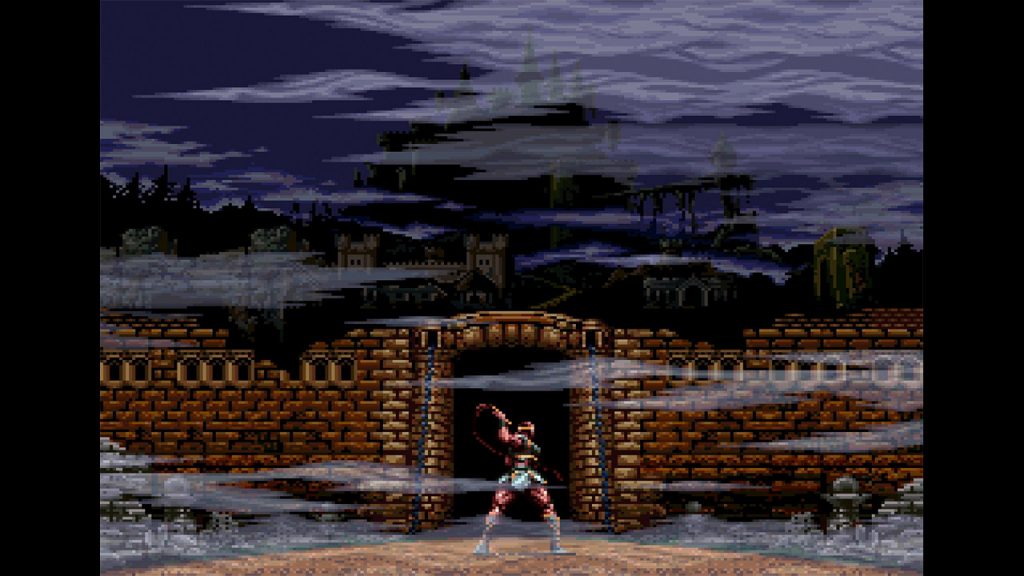 Things become a little less enjoyable with the Game Boy titles. Castlevania: The Adventure is easily the least enjoyable of these for me, bogged down by a low frame rate and questionable choices for the overall game. It lacks the sense of thoughtful layouts and instead piles on difficult obstacles and long, meandering stages. Belmont’s Revenge improves on these issues in pretty much every way, but still doesn’t reach the heights of other games on offer here. If there are any you can ignore it’s these, though their inclusion is nice for collectors and completionists.

Aside from that trio of duos, you’re also getting the often ostracized entry that is Castlevania II: Simon’s Quest and the newly translated Famicom side game Kid Dracula. Thanks to their heavy differences from the rest of the compilation they both manage to stand out for different reasons. Simon’s Quest laid the early foundation for Castlevania’s eventual exploration based genre shift and added RPG like elements (towns and NPCs, purchasing items, becoming stronger over time), but it’s also bogged down by its cryptic nature and stretched out game length. And then there’s the golden boy of this anniversary celebration. 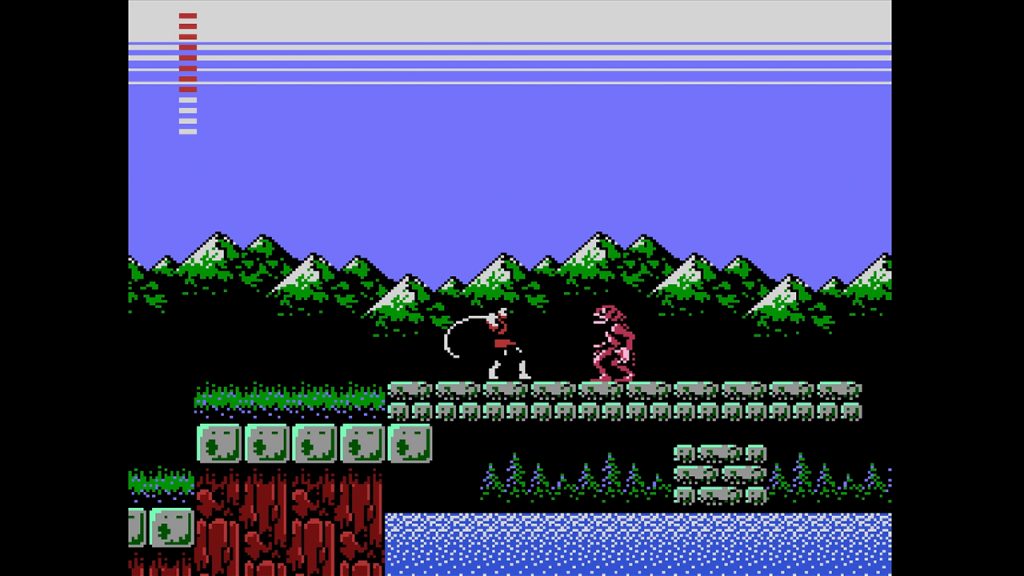 Kid Dracula is my jam to such a great extent that even if it was released as a standalone, I’d have picked it up. Other than being a 2D side scroller with a vampire involved, it’s about as far from Castlevania you can get in tone and mechanics. There’s no Belmont stomping around with purpose, swinging their whip and having difficulties with stairs. Instead you play as Alucard, Dracula’s son (who may or may not be the one seen in Castlevania III/Symphony of the Night), in a lighthearted and colorful romp. If I compared it to anything in particular, it’d be the kind of mascot-driven platformers that were more common in the 16-bit era, bolstered by Kid Dracula’s clear and cute sprite work.

The game feels silly, with its bouncy soundtrack and parody-like atmosphere. It’s a refreshing change of pace from everything else on offer, for as great as Castlevania is many of the games are quite similar to each other. Kid Dracula’s fireball tossing fun works both side by side with these and as a game in its own right. Even now I’m loading the Collection up mostly to play more Kid Dracula, which says something about its worthiness when some of the others in here are recognized as gaming classics. Or maybe it just says something about my taste.

With all that in mind, it’s easy to look at the Anniversary Collection and split it into two piles. The original, III, Super/IV, Bloodlines, and Kid Dracula are standout games for various reasons, and they’re all worth playing even if some run the risk of feeling overly similar to each other. The Game Boy titles and Simon’s Quest are either more divisive or outright unenjoyable due to their slower pacing, questionable side-steps from Castlevania’s strengths, and more individualized faults. You also get a digital history book, full of info and artwork to flip through if you want to learn more about the series. 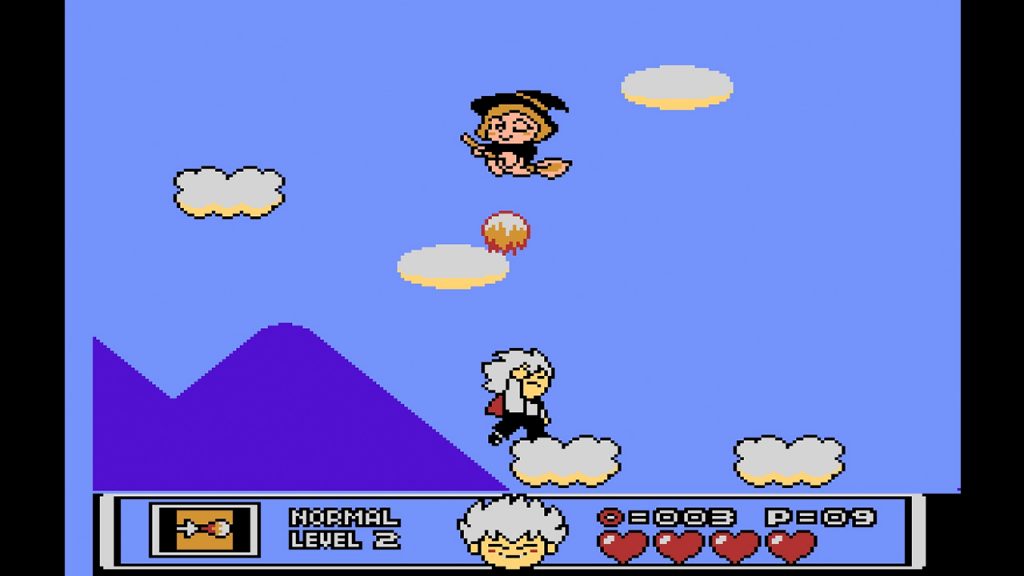 The biggest shortcomings of this collections, though, is what they’re missing. Even if a conscious decision was made to avoid titles such as Symphony of the Night and those inspired by it, the excellent Rondo of Blood (Richter Belmont’s first appearance) is omitted. This could be due to its association with Symphony, as the two are paired in other, non-Nintendo releases. Due to their quality and popularity, I can only assume they may be on the way as a separate package. The Game Boy Kid Dracula is also passed over in spite of it being distinct from the Famicom version and enjoyable in its own right.

Still, it’s hard not to recommend the Castlevania Anniversary Collection. Even if its games aren’t all created equal, and some are available elsewhere (NES and SNES Classic, previous Virtual Consoles, etc), for $19.99 it’s a steal to get this much whip-swinging and fiend-flaying. If Smash has you curious about it, or you’re a longtime fan who already knows what a man is, you won’t be let down by M2’s work bringing these titles back from the grave.