Before I ever owned a home console, arcades were where my interest in games truly started, with more quarters spent than I’d ever want to sit and count. Within those hallowed grounds of lights and sounds two types of games managed to wring the most out of me: fighting games (which I’ve had the privilege of writing about plenty here) and the left-to-right march of the beat ‘em up. Out of nowhere during the recent Nintendo Direct, Capcom decided to dust off some of their classics of the genre and deliver a seven-in-one set of titles (some in America for the very first time) in what should be your next multiplayer pickup on Switch.

All the games in the Beat ‘Em Up Bundle play the same at their core, with their own individual mechanics and themes serving as what set them apart from each other. Even if it feels fundamentally similar to punch and kick your way through Final Fight and Captain Commando, you’d never mistake one for the other due to some exemplary sprite work and gameplay that subtly evolved over the years from game to game. The collection also features a gallery full of art and design documents, as well as out of game settings for features like number of lives, difficulty, and when you gain 1-ups based on point threshold. 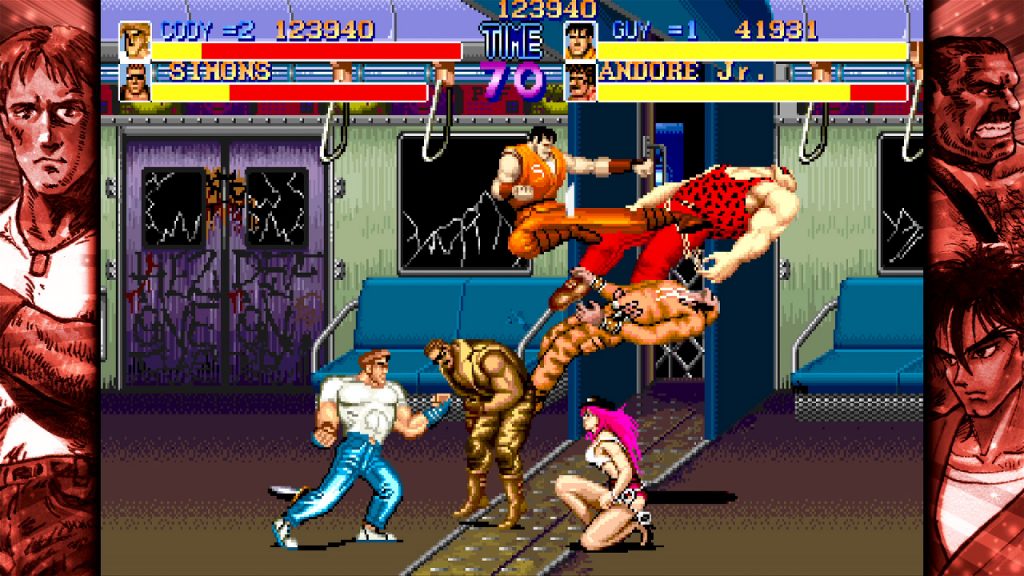 Be aware though: these were never balanced or designed for home console. These games were out to drain your quarters, and it shows. Enemies will gang up on you and getting stun locked is a fairly common occurrence. Playing with friends does alleviate things in that respect, but certain boss fights and sections across the whole section will make things tough with unlimited continues being your most trusted tool in all of this. With that all in mind, we’ll run through the seven featured games to see how they rank when it comes to real belt action.

We’ll start with the two that I’ve already mentioned, aka the Capcom classics. Final Fight is practically synonymous with the genre, playing a huge roll in its popularity and staying in the public eye due to its integration into the Street Fighter series. It may not be the smoothest or fairest game in the collection, and it definitely shows its age, but there’s just something about taking down the Mad Gear Gang that’s addictive and outright fun. 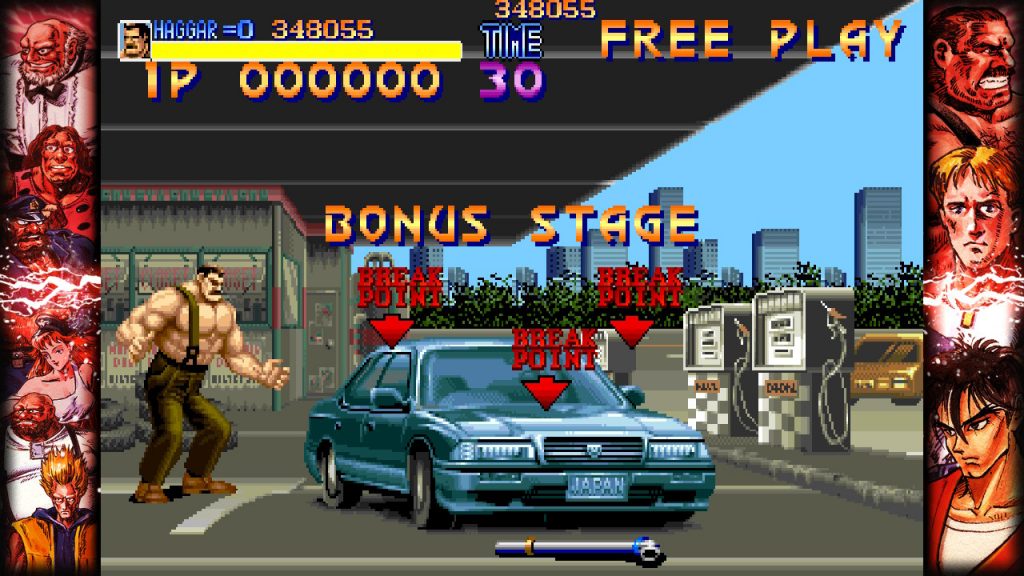 Captain Commando is fairly similar, though coming later it builds on the formula. Now adopting a sci-fi future setting and starring a team of four stylized characters, it introduced more distinct movesets to the fold and also brought quality of life changes. You’re able to dash now, giving your character of choice access to a new kind of charging attack. The environments are more varied and occasional rideable mechs spice things up, but at the end of the day I find it just a little less endearing than the more grounded Final Fight. 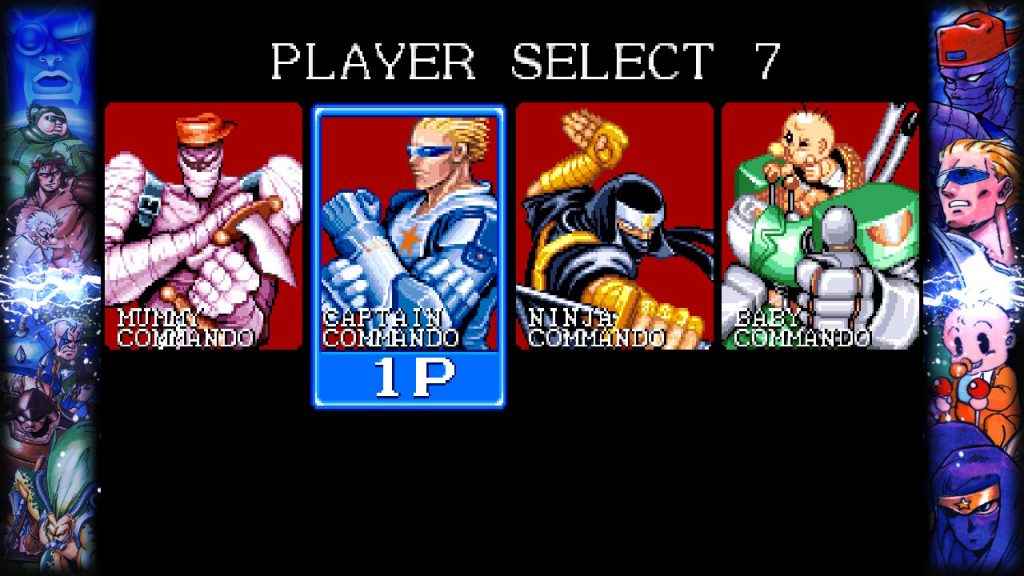 Releasing the same year as Captain Commando were two more medieval offerings: Knights of the Round and The King of Dragons. The former might be the game I enjoyed the least out of the seven, but that doesn’t mean it doesn’t have its charm. Giving you the choice of King Arthur and two of his knights as playable characters, it placed more of an emphasis on blocking that gives it a different feel that never quite clicked for me. Still, the way the characters change their appearance as you progress and level them up is fun to see.

The King of Dragons, on the other hand, provides a more high fantasy vibe, drawing its inspiration most from Dungeons & Dragons before Capcom would eventually get the chance to make games with that license (which sadly aren’t in this bundle). This gives its characters more variety than just being the fast one, the strong one, and the average one. The Wizard and Archer offer up new gameplay opportunities, and the game has a more vibrant and eye-catching color palette than these other early games. You’re able to gather up new pieces of equipment and level up here as well, but it feels slightly more tangible than Knights of the Round due to how this info is displayed and how characters can level up mid-stage. Add in a faster game speed, magic attacks, stronger sound, and visual design — and it comes off as a flashier and more enjoyable game all around. 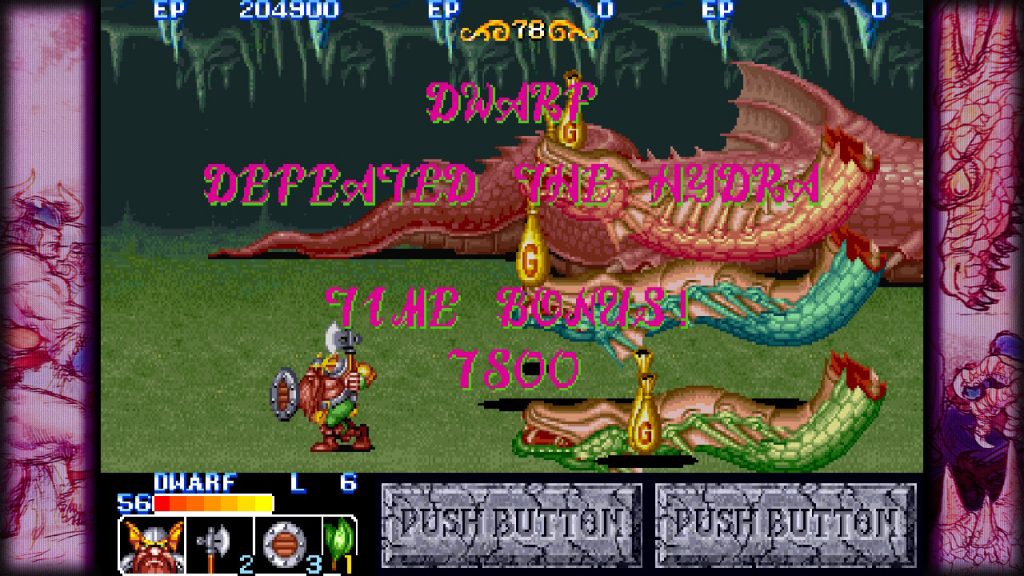 Warriors of Fate is up next, and as much potential as it has I could never get into it. Taking on themes and characters from Japan’s Three Kingdoms period, it stands apart visually from the rest of the collection but didn’t quite do enough from a gameplay perspective. Things feel slower than they should, even with horseback riding as a more prominent feature than it was in Knights of the Round. Still, the five playable characters do offer weapon variety and the sprite work’s solid both for in-game characters and their manga inspired portraits.

If you’ve read to this point and realized I’ve sounded somewhat muted on more than half of these, that’s somewhat to be expected in a genre based bundle like this. Not every game can be as iconic an example as Final Fight or as quick and fun as The King of Dragons. But that’s part over now, because the last two games of the set are easily the highlights and mark a huge improvement. This is when Capcom moved their games to a newer generation arcade system and it shows, with the added benefit of these last two titles having never been released in America ’til now. 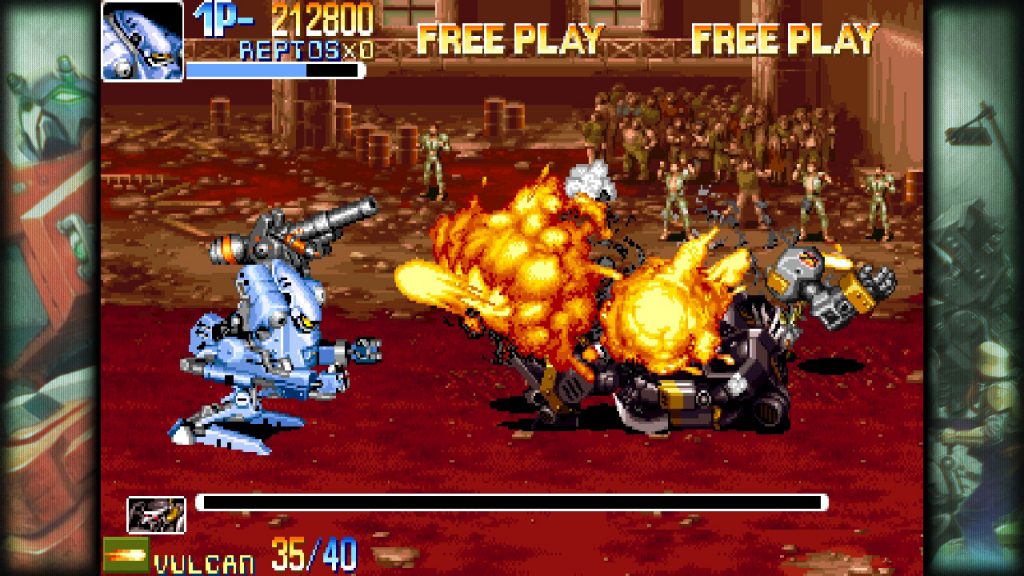 Armored Warriors ups the scale, putting you in control of giant mechs. Unlike Captain Commando, where the sometimes busier sprites end up looking visually messy, these mecha are all distinct and detailed while standing out from the drearier backgrounds. The game might be the quickest of all these beat ‘em ups as well, but the real selling point is in how you’re able to gather up and immediately equip weapons and pieces from robots you’ve defeated as weaponry. This adds elements like machine guns, drill arms, and even tank treads to the mix; and it elevates the game from good looking and responsive to one with plenty more moving parts.

And then there’s Battle Circuit.

Battle Circuit elevates this package just by being present, carrying a fleshed out art style and character designs from some of Capcom’s best years. You can play as, among others, a sharp-toothed pink ostrich with an eyepatch and a crawling plant eyeball alien, offering much needed variety in a genre stacked with muscled up dudes or more typical warriors. There’s a greater degree of character animation, the entire world is colorful and off the rails, and you can purchase more attacks for your characters as you gather up money (they are bounty hunters, after all) to give it the most variety in available techniques. For me this might be the gold standard for beat ‘em ups going forward, which is saying something for a game from 1997. 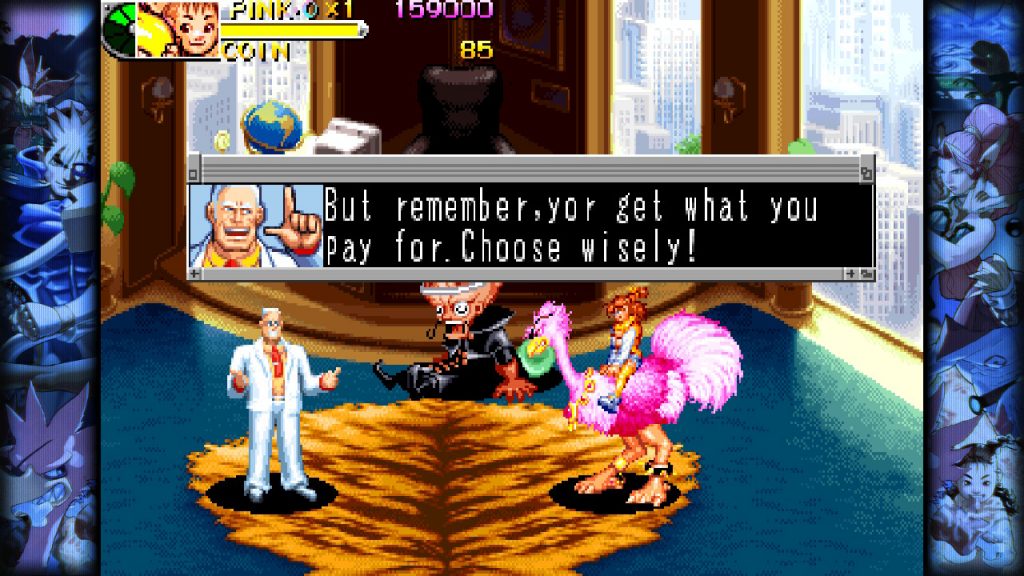 All in all, I had a lot of fun with the Capcom Beat ‘Em Up Bundle. It may not be the most balanced offering of games, but with the high points of Battle Circuit and Armored Warriors mingling with Final Fight and The King of Dragons, it’s hard to say no to spending some time with these. Be warned, the online performance for the Switch version is definitely not the smoothest, but these are games meant to be played with friends at your side just like in the arcade. That doesn’t excuse the feature, mind you, and hopefully Capcom can fix it in time. But for evoking that same fun of game centers past, this collection can’t be beat.