One of the biggest surprises of the E3 show floor was the fact that Nintendo had the sequel to the beloved indie smash-hit Hollow Knight as a playable demo at their booth. Available in the demo were two stages to choose from: Moss Grotto and Deep Dock. Selecting Moss Grotto displays a quote, similar to the beginning of Hollow Knight:

“They see your beauty, so frail and fine,
They see your peace, woven of faith and toil,
They forget your heart, bound in slumber and servitude,
When you wake they shall see your truth,
A beast’s nature bare to all.”

-From ‘Pharloom’s Folly’ by the Conductor Romino

After this quote, an expanded version of the cutscene shown in Silksong’s reveal trailer begins — Hornet is shown captured with some sort of seal around the cage. We see the seal break and then watch as Hornet escapes with the help of her silk strands, shattering the bridge she is being carried across.

The gameplay starts with Hornet waking at the bottom of the chasm inside of the Moss Grotto, and from there you can begin to explore. The area looks a lot like Greenpath from the first game, albeit more mossy. In a few areas I spotted what look like doors that look somewhat similar to the mask that Herrah the Beast, Hornet’s mother, wears, though with sharper and more angular eyes. Further exploration of Moss Grotto brings Hornet face-to-face with a brand new boss for Silksong: Moss Mother. The Moss Mother fight is pretty standard for Hollow Knight, slashing her with Hornet’s needle hurts her, she’s able to slam into the ceiling to drop pieces down on top of you, and she’s able to call minions in to distract and/or hurt you. After beating Moss Mother, there wasn’t much else to do in the Moss Grotto demo. 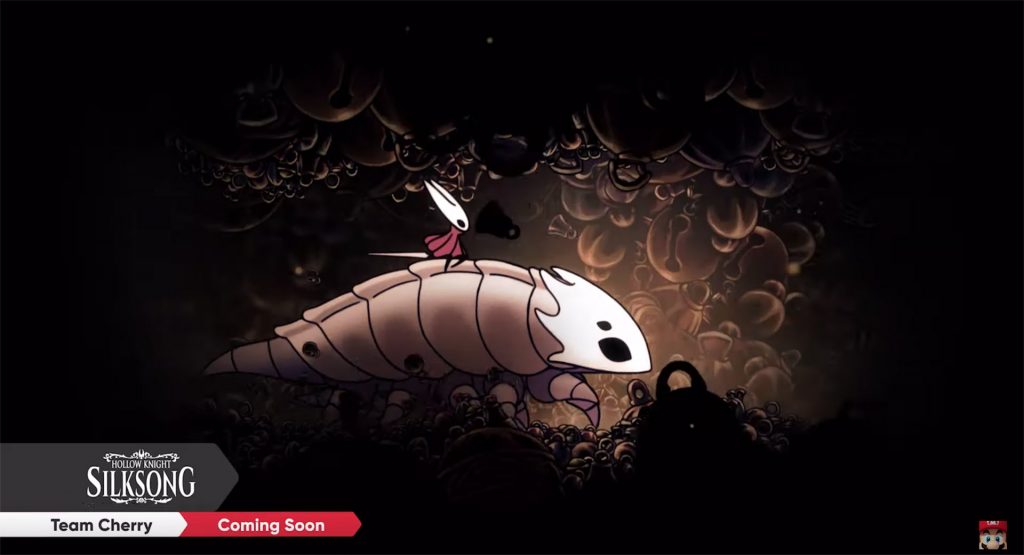 The second demo, Deep Docks, is much more expansive and shows off a world very different from Hallownest. The docks themselves are very metallic, and plenty of areas show off something we didn’t see in the original Hollow Knight: lava. It was in Deep Docks that the platforming of Silksong was on display most, with plenty of room to climb and narrowly avoid falling lava plumes. There are also plenty more enemies to fight in Deep Docks that are a bit trickier to take down than by just using mindless slashing, like flying bugs that can be damaged by hitting their projectiles back at them. Deep Docks is also home to several NPCs, including a forge-bug who seems to be able to make tools for Hornet, as well as a rival of Hornet named Lace.

As far as Hornet’s abilities versus the Knight’s abilities in the original game, some of the basics felt very similar — Hornet is able to slash to the side and up above herself, but while in the air she isn’t able to attack straight down and “pogo” off of enemies, instead she performs a diagonal dash attack, meaning it’s a little harder to juggle yourself off of enemies than it was in the first game. Masks are still used for health, and you can heal yourself by holding down the A button, but it isn’t done by using Soul; in fact, there isn’t a Soul gauge for Hornet at all. Instead there is a spool of string that fills up when you attack enemies, and when used to heal, it empties the entire spool to heal three masks at once.

It also appears that Silksong will be using more than one new currency since Geo, the currency of Hallownest, is nowhere to be found in the demo. Instead, the main currency looks to be small, sharp rocks, the name of which I either didn’t catch, or wasn’t shown in the demo. There was also a secondary currency shown titled “Rosary Beads.” Hornet herself has a few powers that add to Silksong’s gameplay — those shown off in the demos were the ability to grab a ledge and hop up onto it, and the ability to use tools. There were no tools present in the Moss Grotto demo, but in Deep Docks Hornet was able to use small throwing knives to damage enemies from a distance.

Overall, Silksong looks to be adding a lot to the Hollow Knight equation, but I’m happy to report that it feels like Hollow Knight through and through, despite the changes and additions. There’s still no word from Team Cherry or Nintendo on a release date for Hollow Knight: Silksong, but hopefully we’ll be hearing more from them on that front very soon.