Welcome back to Season 2 of the Character Column, where we run down all manner of royal, ruffian, and rough-around-the-edges rube in a weekly analysis of various characters. Last week we ran down the nuances of Inklings and avatars in Splatoon.

This week, I’d like to begin by demanding that you look at this precious creature: 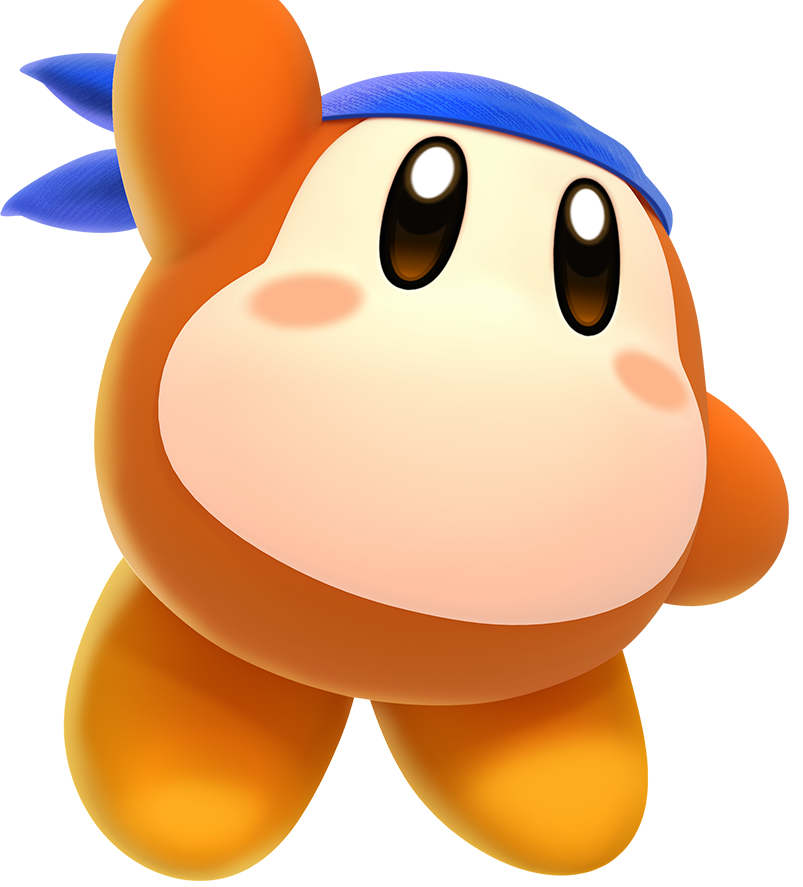 Have you ever seen such a good boy?! 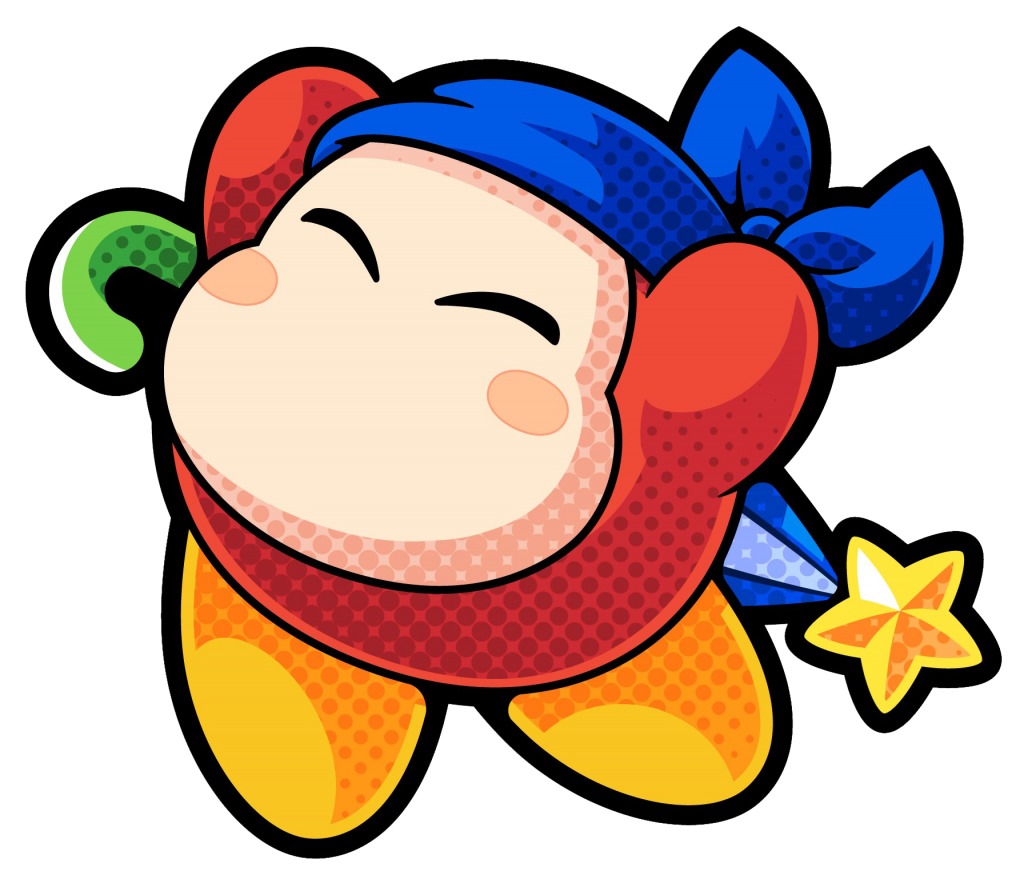 I want to protect this nonexistent smile.

It is a well known fact among my peers that I personally believe Bandana Waddle Dee to be the bestest boy who ever did live, to the point where the little red-orange ball of optimism is my Twitter avatar (shameless plug!). And I’m not alone in my adoration for the little fella — he’s been slowly climbing in popularity for over a decade now after his official first appearance in the revamped Kirby Super Star Ultra, going on to adopt a prestigious playable character role in Kirby’s Return to Dream Land, where he was solidified into a more concrete identity.

Bandana Waddle Dee is so popular (especially in Japan) that in the lead up to Super Smash Bros. Ultimate, he’s been one of the most oft-requested characters among the fanbase, being widely considered the obvious choice for a fourth Kirby request. And for a while, he was a pretty uncontroversial pick — Kirby’s popular, he’s popular in Kirby, he’s been playable in several games at this point, where was the issue?

Well, because the internet thrives on dissent, accusations of Bandana Waddle Dee being a bad fit sprung forth, primarily based around a perceived lack of distinguishment from his fellow Waddle Dees. He was slandered as “just a goomba with a hat,” with detractors claiming that the precious being was lacking in identity and personality. And to them I say: NAY!

How could you hate such purity, you vile demons?!

But today, I’m not merely concerned with defending BWD’s dignity from salty Smash speculators. I’m more interested in dissecting why this became the main criticism of Bandana Waddle Dee’s “chances” of becoming a Smash newcomer when any Kirby fan worth their salt knows him to have a presence beyond just a mildly special minion. What makes a minion a minion, and a minion with a hat… a character?

Bandana Waddle Dee (generally shortened to just “Bandana Dee” despite the fact that’s never been used as official nomenclature) technically first appeared way back in the original version of Kirby Super Star in the Megaton Punch minigame. But he didn’t really come into his own until the Ultra remake, where he served a small role in the “Revenge of the King” mode. There Bandana Dee acts as King Dedede’s most loyal servant, bravely going to fight Kirby despite the odds being desperately stacked against him, and showing both valor and fealty in his futile mission. His boss fight is somewhat of a joke, as he’s literally just a Waddle Dee with more HP (and can even be swallowed to win instantly), but somehow soldiers on to be the lone support for his King in his final masked bout with the pink puffball. 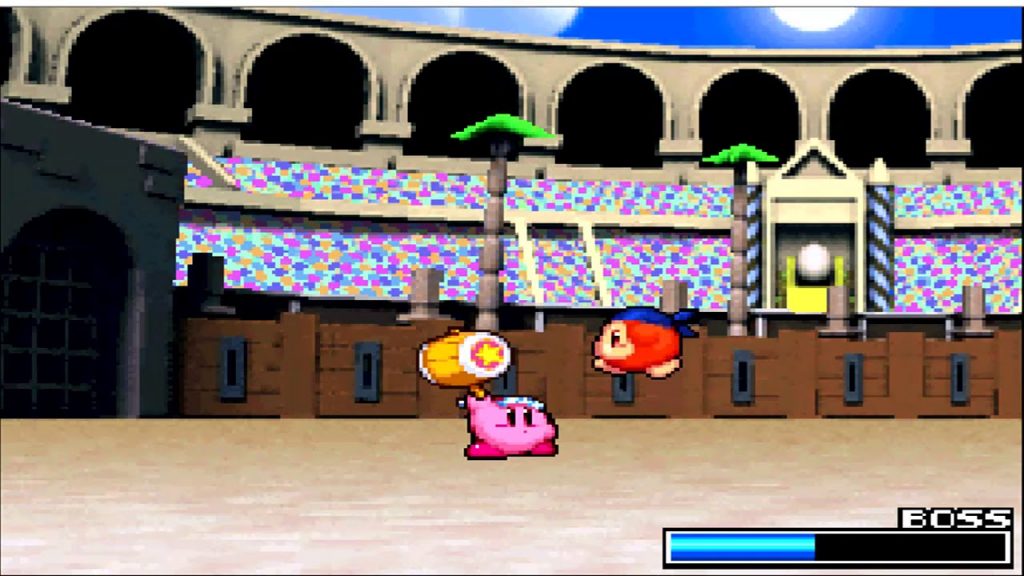 He also shows up in The Arena to just… just… perish.

While a fierce proponent of King Dedede in his initial debut, Bandana Dee quickly becomes more of a support character to Kirby in whatever quest he’s partaking upon. He helps both Kirby and the King in Return to Dream Land in their quest to restore Magolor’s ship, while in Triple Deluxe and Planet Robobot he acts as a helper who tosses Kirby items for assistance. While he’s not the first Kirby friend in the series to act in such a way, he is the most recent and consistent, appearing in nearly every game since Mass Attack as a good friend to Kirbs, and evening having some great prominence in spinoffs like Rainbow Curse and Battle Royale. Some even speculate that the Waddle Dee in Kirby 64 is actually our blue-sporting friend. Toss in another playable character appearance in Star Allies earlier this year, and it’s easy to see that Bandana Waddle Dee is no mere minion, but a prominent supporting cast member in his own right.

I could go more into the details of each appearance, but I’m not here to argue that he’s some tragic Byronic hero or surprisingly complex figure or something. Bandana Dee is just a simple, helpful little guy who acts as Kirby’s current best friend whenever he’s busy saving the world. It’s not the most nuanced character, but it doesn’t need to be. It’s not like you play Kirby for the rich character development, do you? Of course not — everybody plays Kirby for the rich, deep lore! 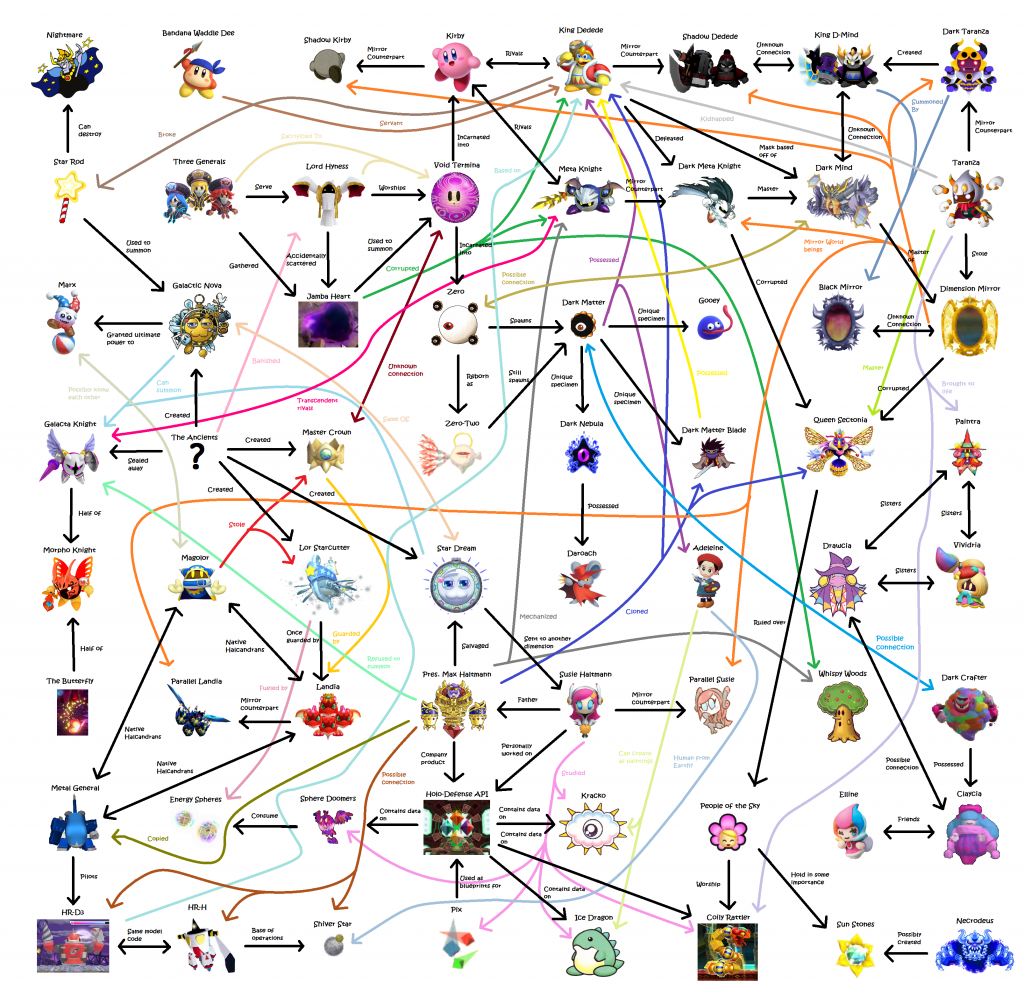 What, you thought I was kidding? This stuff makes Tolkien look like Twilight.

But one’s status as an iconic or memorable character is not solely predicated on their depth. Mario is the face of video games as a whole and he has the emotional complexity of a dried out mushroom. Bandana Dee may not be too visually distinct from his compatriots, true, but surely he has enough going for him to warrant a separate presence from being just a Waddle Dee? I mean, it’s not like an actual “goomba with a hat” has ever been a character, right? 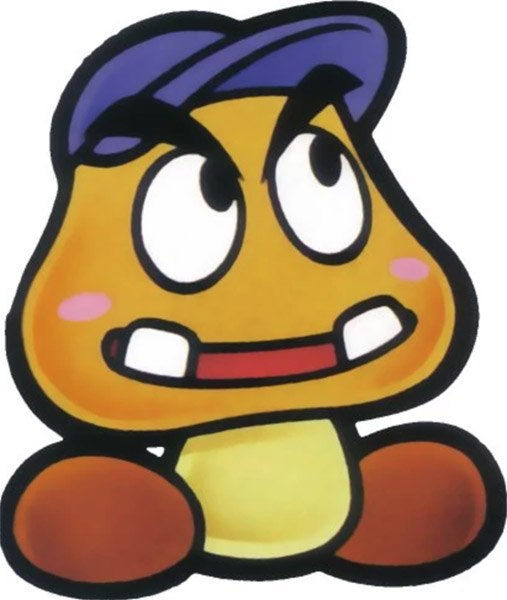 The above, as anybody with good taste will surely know, is Goombario, the first partner character who joins Mario’s quest in Paper Mario. Goombario is a quite simple and unextraordinary character — he wants to be like Mario, and thus has taken to emulating his jumping abilities to bonk foes on the noggin. He assists Mario like an adoring fanboy, bidding farewell to his family before embarking on the quest.

Now, it’s not as if Goombario is a particularly beloved or relevant character, and I don’t believe I’ve ever heard him requested for a Smash fighter slot. But I also don’t think anybody would claim that he’s just “a goomba with a hat.” His personality is thin, admittedly, but it’s not as if he’s devoid of distinguishing characteristics from other members of his species.

The same holds true for just about every partner in the first two Paper Mario games, actually — with a few notable exceptions (Flurrie and Vivian from The Thousand Year Door), each one is based on a classic Mario baddie. And while the uniqueness of their personalities ranges from eccentric to banal, I think it’s safe to say that nobody would have trouble distinguishing them from the species they derive from. So why does Bandana Dee get flack when he has more presence and personality? 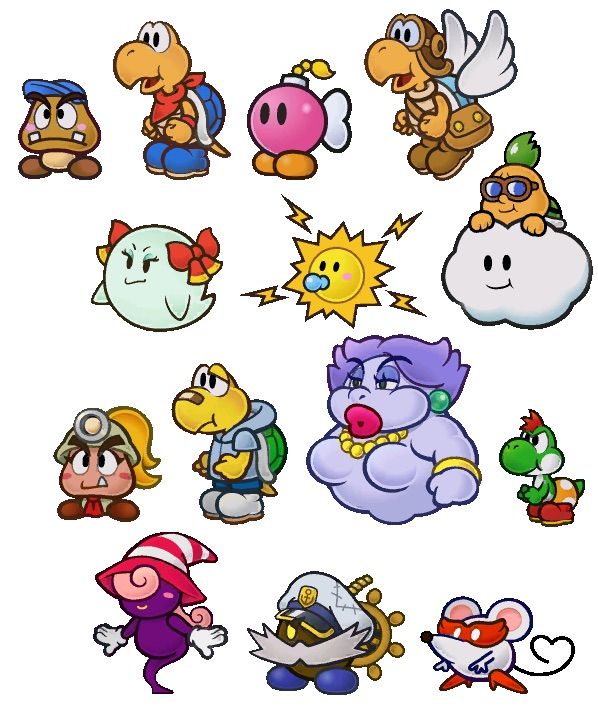 I’m only just now noticing that Kooper and Parakarry have the same expression.

The answer is twofold. First, design. While a couple Paper Mario characters are pretty simply designed, they usually have some distinguishing characteristic beyond mere attire — Goombella is the rare female goomba, Bombette sports a pink body and ponytail fuse, TTYD’s Yoshi has a rad mohawk, and so on. Bandana Dee, if you were to remove his titular implement and weapon, would simply be a Waddle Dee. He doesn’t sport any particular coloration or facial feature to differentiate himself from the others in his species.

The other is even more simple — a name. While he does have a title that everyone knows him by, BWD’s name is literally his species plus his clothing. It’d be like calling Mario “Red Overalls Plumber” or Samus “Power Armor Mercenary” — it lacks distinction. And thus, it’s really easy for a passerby to assume that Bandana Waddle Dee is… well, just a Waddle Dee with a bandana.

Thus, I propose to officially christen this precious hero. No longer will he be known merely for what he is, but rather who he is — and that is a creature of compassion, courage, and righteous character. For all of his greatness and services, I hereby dub him… Dee.

Looking at the minion in the mirror

But this examination of Dee and the Paper Mario partners invites a point of larger discussion. When does a character that’s part of a larger species become more than just an NPC? Is it simply when they’re christened with another name? Or when they take on a role distinguished from that of their peers?

I briefly glossed over the Waddle Dee that appears as a staunch friend to Kirby in his N64 adventure, and how many speculate that this is in fact our spear-wielding savant. While I think most do this for a sense of cohesion in a series that is paying more and more respect to its own continuity, considering this partner as just another Waddle Dee provides an interesting question — is he really just another Waddle Dee? What’s to separate him from his peers, besides a role to play? Could any Waddle Dee have fulfilled such a role, or is this one special for some reason?

At the time, a platformer like Kirby wasn’t really concerned with the self-actualization of its minor enemies — and, in all probability, it still isn’t. The Waddle Dees are often considered more a monolithic mob than a diverse group with different personalities, thoughts, and ideals. But that’s just why ol’ Bandana Dee stands out so much. In a sea of the same species, he’s carved out his own little place in the series, and is now considered a superstar in his own right.

Bandana Waddle Dee didn’t make the cut for Smash Ultimate’s launch. And with the announcement that the DLC is going to be full of surprise picks à la Joker, I don’t know if he’ll make it in now. But he’s definitely one to be considered for future Smash installments. After all, he’s distinguished himself time and time again as a character worthy of respect and honor, separate from the rest of his species. And having a unique, tangible presence is important to making it into Smash. After all, it’s not like Sakurai… would just… pick a generic enemy… as a fighter……. Right… 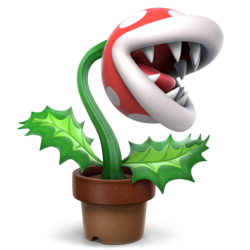 Next time: We talk about the plant.