Before There Was NES: Part 2

Please note: This article is Part 2 of a miniseries about the days before Nintendo solely focused on video games. Part 1 dives into the very beginnings of the company, back when it produced playing cards. Check it out here!

Up through the first decade or so of Hiroshi Yamauchi’s tenure as president of Nintendo, the company’s focus remained on playing cards. Though this market had experienced multiple breakthroughs under his leadership, such as mass-produced plastic playing cards and rulebooks describing a variety of games that could be played with its decks, Yamauchi recognized the limitations of the playing card business. He had this realization during a visit to the United States Playing Card Company in Cincinnati, Ohio. Seeing the small office and factory that was, at the time, the world’s largest playing card manufacturer, stirred in him the aspiration to push his company above and beyond card games.

The 1960s were a peculiar time in Nintendo’s history. Caught somewhere between the increasingly stagnant playing card market and the pursuit of its next instinctive move, Hiroshi rebranded the company once more and began channeling its reserves down many experimental avenues. Now simply Nintendo Co., Ltd., the company tried desperately to build upon its revenue in a variety of uncharacteristic ways. These ventures varied from practical household items, like instant rice and strollers for children, to public services, such as a taxi business and a chain of short-stay hotels. I’ll spare you the details on that last one.

Fortunately for us, consumers didn’t care much for Nintendo’s rice, and while its strollers were at least tangentially related to its areas of expertise, they didn’t find their way into many Japanese homes. Of all the ideas that Yamauchi had flung at the wall over this relatively short five year period, hardly anything stuck. In the short term, this left Nintendo reeling with shallow pockets and considerable debt, but in the grand scheme of things, it sent the company, and Yamauchi, back to consider what it did best.

Amidst this scattershot approach, Yamauchi had one more iron in the fire. In hindsight, it was the only one that really made sense for Nintendo: toys. It wasn’t an instant success story, though. Here was Nintendo, the shark of the Japanese playing card pool, suddenly a guppy in the vast toy company ocean. Established giants like Tomy and Bandai already had an understanding of the market, so Nintendo was forced to adapt quickly to have any hope of staying afloat. (Okay, okay, I’m done with my aquatic metaphor.)

Toys turned out to be a good fit for Nintendo, and fortune smiled in 1966 while Yamauchi was touring a hanafuda factory. A recently hired maintenance man, Gunpei Yokoi, was working on the assembly line. Yamauchi took notice of Yokoi, and an extendable arm gadget that he had fashioned in his free time. Needing something to satisfy the impending holiday rush, Yamauchi ordered him to develop the contraption into a marketable product. The “Ultra Hand” became a huge success, selling over a million units and affirming Nintendo’s new direction.

Armed with a promotion to design and a degree in electrical engineering, Yokoi was able to experiment in both conventional toys and electronics. One of his most novel inventions around this time was Chiritorie, a remote controlled vacuum cleaner. Falling somewhere between houseware and interactive electronics, it was novel enough to sell. He also crafted some toys that would successfully piggyback on the popularity of the Ultra Hand: the Ultra Machine, an automated softball-pitching device, and the Ultra Scope, a toy periscope. 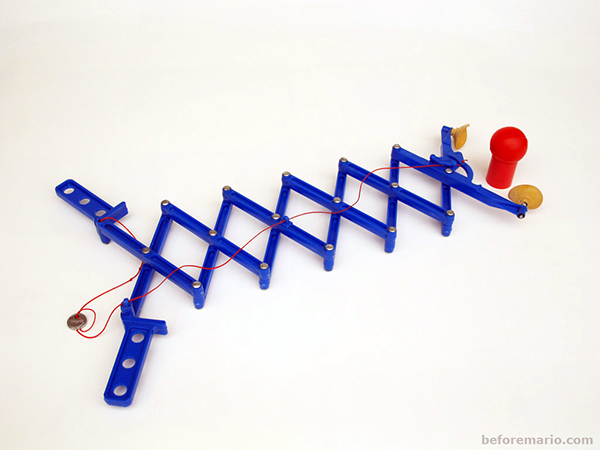 It wasn’t until the early ’70s that Nintendo’s toys began to look more like its contemporary successors. In 1970, Nintendo released the first in a series of light gun toys. Packages included an electronic gun and a variety of targets that would react in various ways when shot. Marketed to all ages (now a core tenet of Nintendo’s business), these games marked another big success for the company. And, more importantly, they put Nintendo within a stone’s throw of its ultimate destination: our living room televisions.

There’s still another decade between us and the Nintendo Entertainment System, and there are plenty more ideas and products that paved the way there. We’ll find out about the first home video game console and experiments in abandoned bowling alleys in the next, and final, “Before there was NES.”