The past few years have been good to the confusingly titled Wonder/Monster Boy/World franchise. After decades of silence, we received multiple remakes and even one officially licensed sequel, while the classic games have made regular appearances in collections and on the Sega Genesis Mini. Better yet, almost all of these projects have been met with praise from fans and newcomers alike.

This latest throwback from Artdink and a team of veterans is a remake of the game formerly known as Monster World IV, but does it reach the heights of the other franchise revivals?

In stills, it’s not the prettiest game. I remember being put off when I first saw screenshots, feeling the characters looked stiff in a lifeless world. Thankfully, in motion and the final product, things aren’t quite that bad. Asha is very expressive in gameplay, the color palette is vibrant and varied, and the free camera is used to decent effect in cutscenes and is occasionally even moved during gameplay to give an alternative perspective on the side-scrolling action. 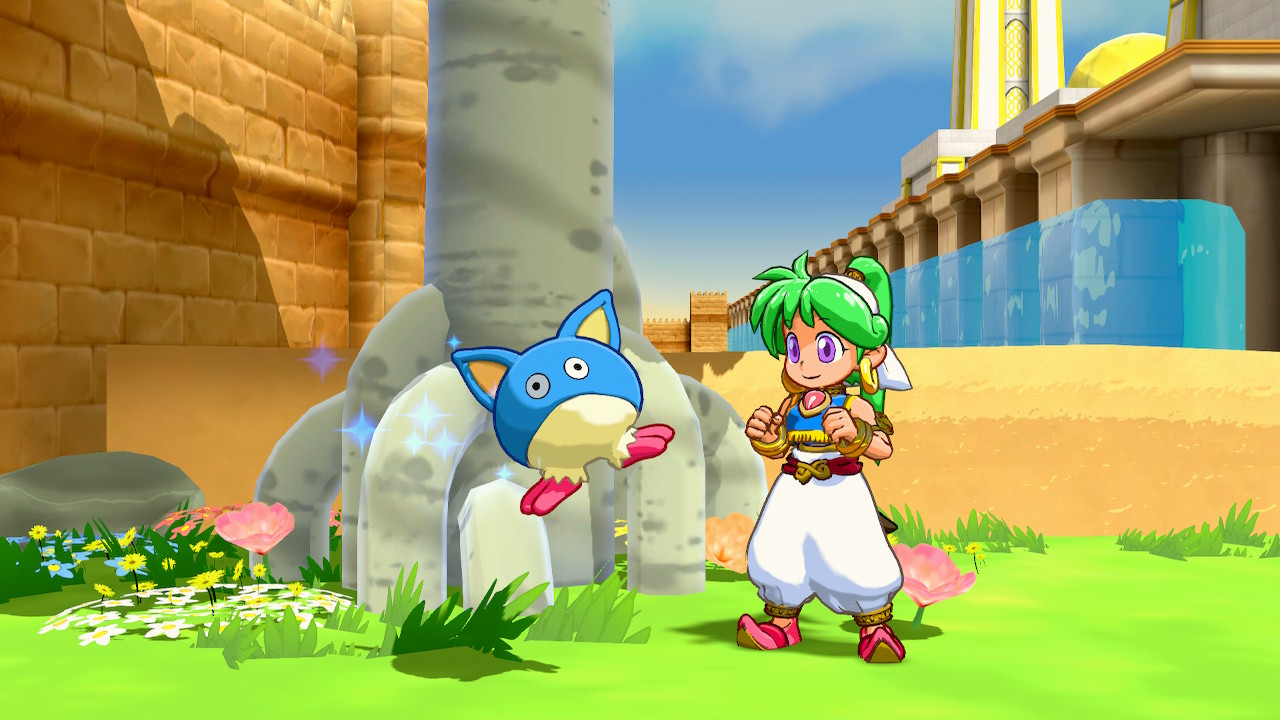 Perhaps the strongest benefit to going 3D for this game in particular is the world’s literal depth. The original Monster World IV had Asha going in and out of the background, either to change rooms or find secret routes behind bushes. While this was pretty ingenious for the time, it wasn’t easy figuring out the layers, and getting lost was all but a guarantee. When you turn the world 3D, however, it all becomes clear. Once hidden pathways are now visible, you just need to figure out how to get to them, and Rapadagna Castle is transformed from a mess of stairwells and doors into an easily navigable loop.

All that said, the game is very much devoted to following the original title, sometimes to its detriment. That 3D traversal, for example, is complicated by certain pathways only being one-way. On the Mega Drive/Genesis this sort of thing would be obfuscated by limitations, but in this new, fully-rendered form it can be very frustrating when Asha is incapable of walking down an alleyway unless she approaches it from a certain direction. 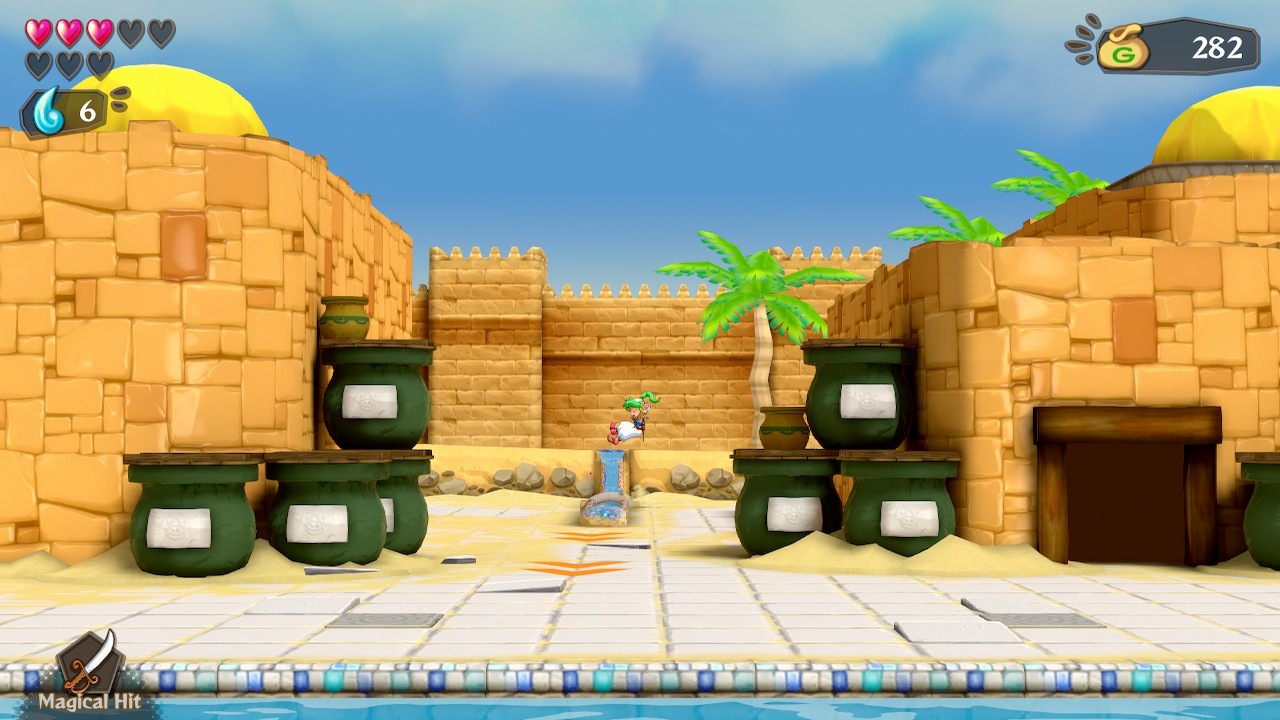 Similarly, the animations are kept a little too 1:1 with the original games, being remarkably rigid at times despite the expressiveness of the characters’ faces and their more dynamic cutscene gestures.

The audio gets a fair bit of attention, at least. Music is reorchestrated and, while the leitmotif of the game could be seen as a little too omnipresent, it’s undoubtedly an ear worm. There’s also voice acting for most of the important cutscenes, though it’s worth noting that it’s only in Japanese with subtitles, and the localization can prove spotty. 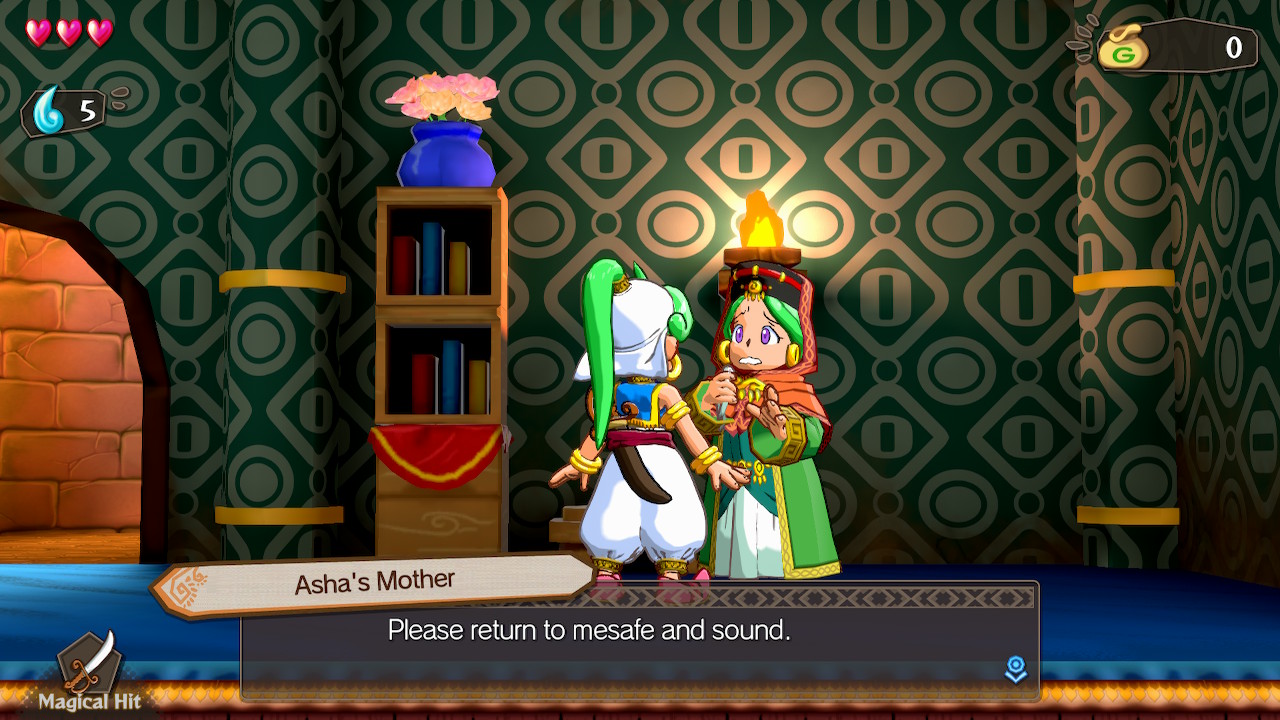 That’s the aesthetics covered, so how about the gameplay? Well, with things being so faithful to the original game, it’s almost entirely identical, with some slight modernization tweaks.

The game is a sidescroller where you play as the titular Asha, who has the franchise’s customary sword and shield skills. The main gimmick this time around is your little companion character – Pepelogoo. This flying blue blob is key to almost all of the game’s puzzles and platforming challenges.

With a quick whistle, Asha can call Pepelogoo over and hoist him over her head. From there she can glide over gaps, double jump, or even throw him to reach far-off objects. More abilities for the little guy unlock as you go along, and when it all comes together, the gameplay is a satisfying combination of action, platforming, and puzzle solving through mostly linear levels.

It’s the small tweaks that change things, ever so slightly. For example, running used to be activated by tapping the direction twice on the D-Pad. That’s still an option, and what you’ll usually want to stick with, but you can swap over to the analog stick which, at full tilt, will have you dashing instantly. This can prove handy in rapid-fire platforming moments that require a running jump.

The inventory system is also much less cumbersome. If you had to unlock a door in the original you’d need to open your bag and select the key, something that’s now done automatically by simply interacting with the door. The quirky little chest opening animations can also be skipped over, and health bars are now displayed above enemies’ heads once you strike them.

Another handy feature is the tracking of Life Drops. These blue collectables are how you permanently increase your life meter – get 10, get an extra heart. There are a finite number in each stage, and you’ll want to collect as many as possible. Whenever you beat a final boss of an area in this remake, it shows you a tally of how many you’ve picked up, and you can elect to go back and grab whichever ones you missed. It’s still a bit of a chore tracking down one or two stragglers, but being given a heads up is appreciated. 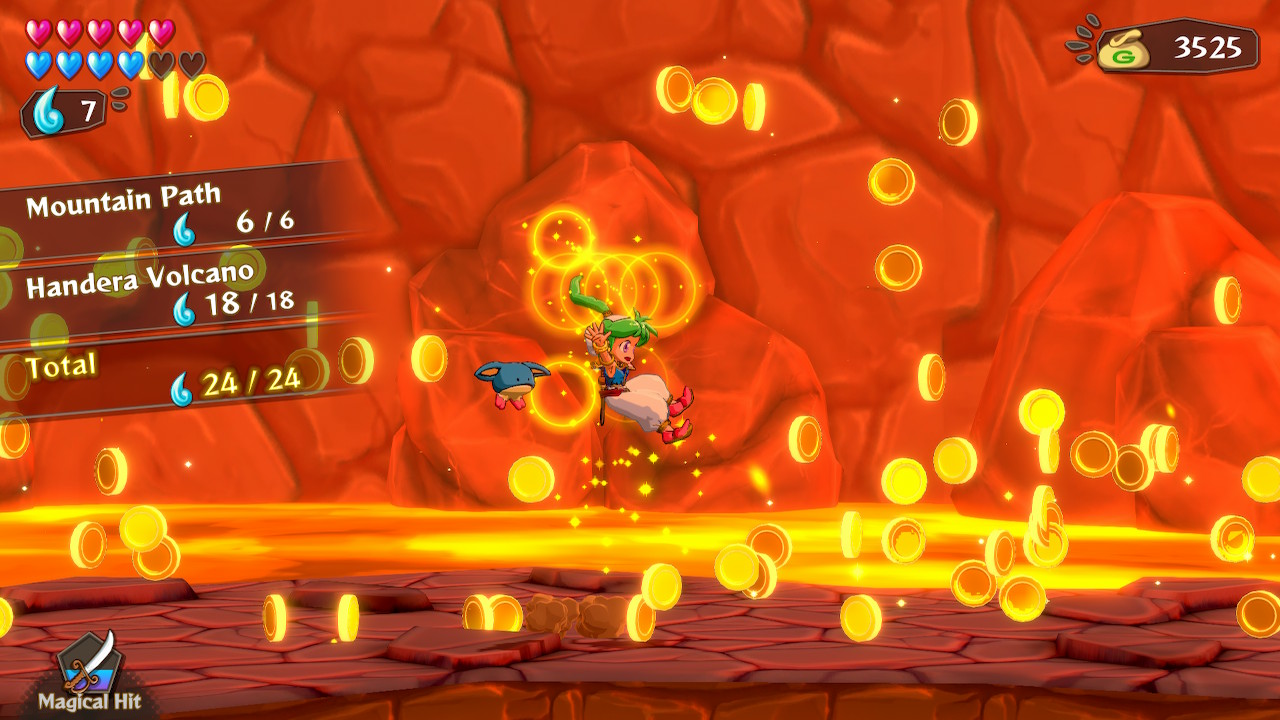 Thanks to the switch to 3D, however, hit detection can be hard to gauge, especially with bosses, resulting in Asha taking a lot more hits and whiffing sword strikes more than I’d have liked. Thankfully the game compensates for this by making things generally easier by letting you carry more than one Elixir, effectively making it possible to come back from death multiple times if you’re having trouble.

Save the World, and your Game

That brings me to one of the weirdest issues introduced with this remake – saving. In Monster World IV, you saved your progress by talking to the fittingly named Save Sages. While these characters still exist, they act as hint-givers, with the save dialogue being excised. Saving instead is done via the main menu, on the laggiest, most unresponsive screen in the game. Why it’s that way, I have no idea.

In theory, this method of saving makes the game much easier, as you can save practically anywhere besides boss rooms. If you somehow manage to run out of elixirs and die, you can simply reload just before the area that gave you trouble. 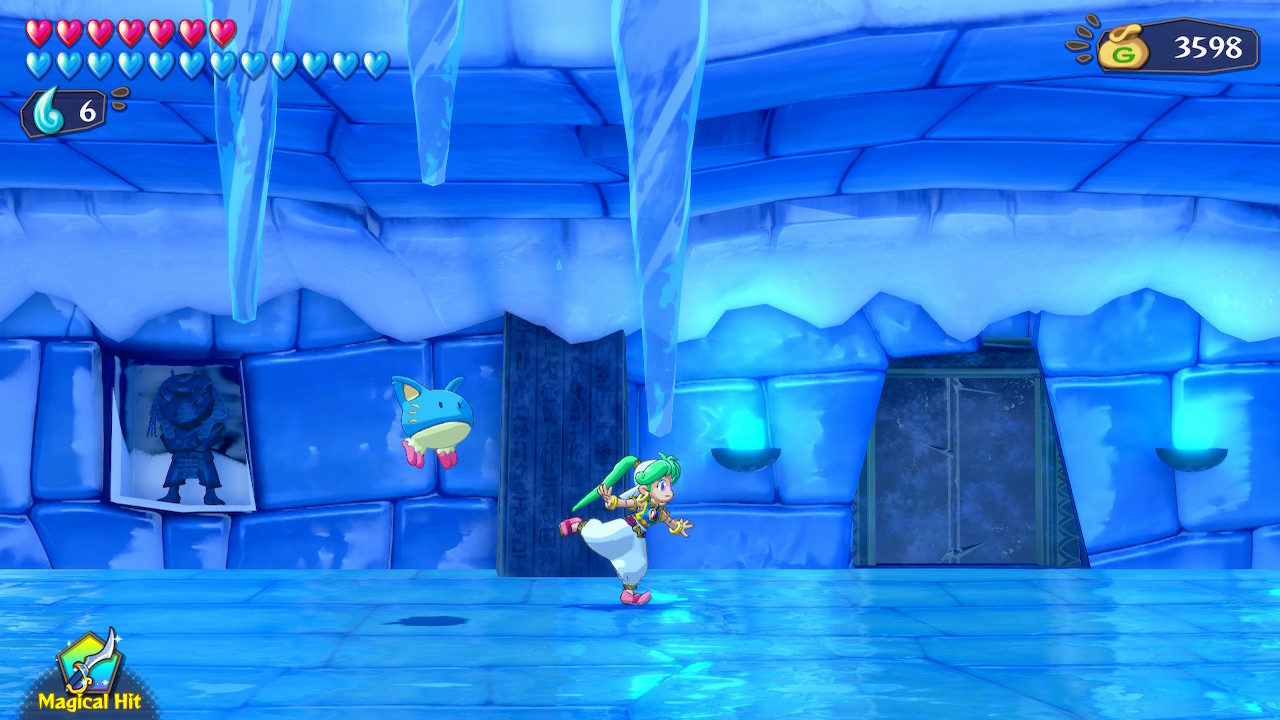 Yet the game does not tell you this, and if you’re working on the assumption of having auto saves, you could lose hours of progress. Granted, anyone reading will now know to save often, making it a moot point, but it was jarring in a game that is otherwise full of helpful tips and tutorials.

Wonder Boy: Asha in Monster World is a difficult game to recommend. While the core gameplay from Monster World IV is still fantastic and mostly retained, it can’t be denied that the original game still holds up for the most part, so long as you can get over the hardware limitations. It was one of the later Sega Mega Drive games, releasing in 1994, and the prowess of original developer Westone shines through.

The remake, by comparison, already feels dated and unpolished in a lot of ways, despite its minor improvements. 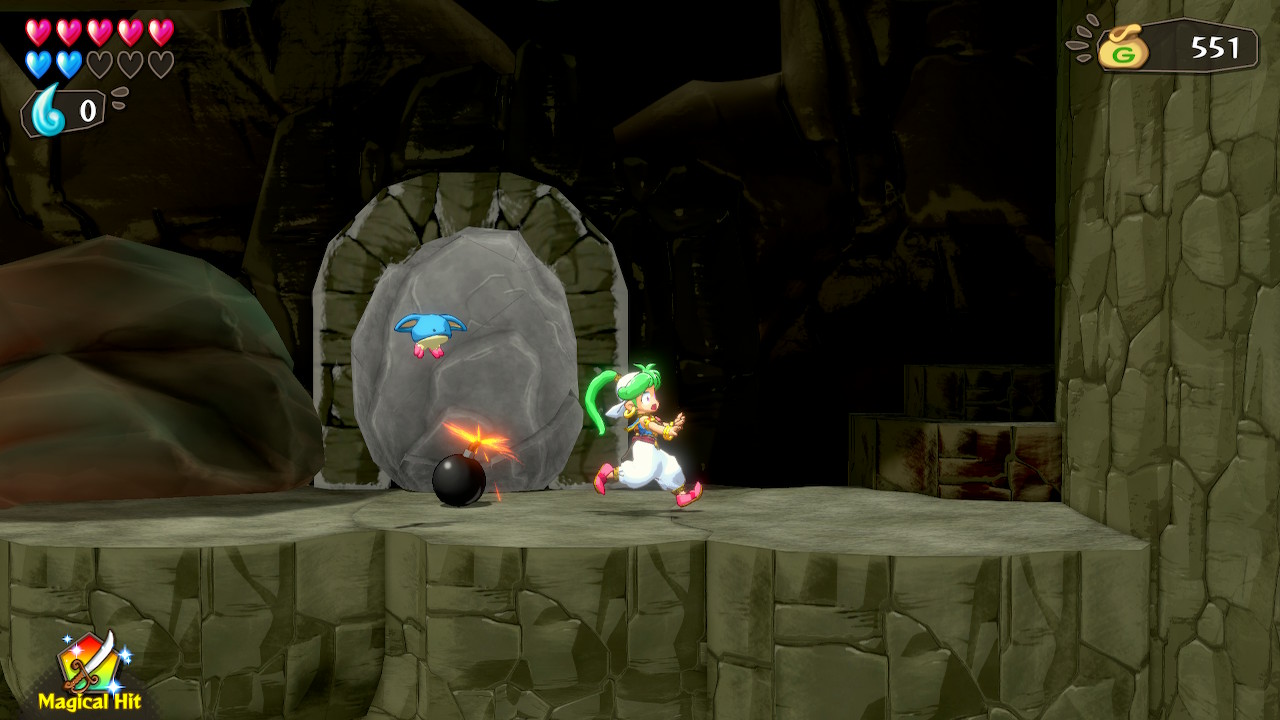 If you are able to pick up the physical copy of Asha in Monster World that is bundled with the original game, which is otherwise inaccessible on Switch, I would definitely recommend picking it up and playing the Mega Drive version first.

As for starting with the remake, that’s a harder recommendation. 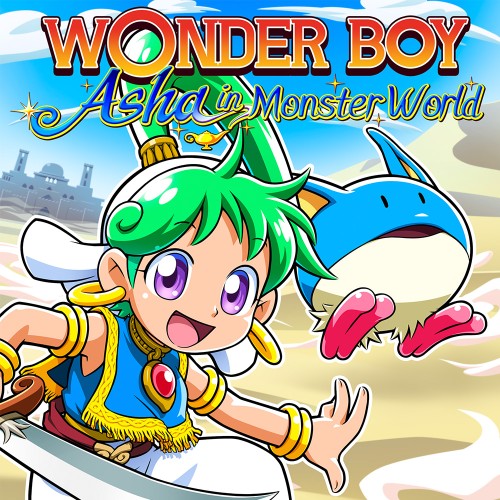