It’s been awhile since I’ve played a strategy game that wasn’t part of the Fire Emblem franchise, so it’s safe to say that Square Enix’s announcement of Project Triangle Strategy last year left me incredibly intrigued. I liked what I saw in the very first demo they released, and I’ve been eagerly anticipating the release of the game ever since. Now that Triangle Strategy is in my hands (sans the “Project” moniker), I can safely say it’s everything I wanted from a new strategy game and more.

Triangle Strategy takes place on the continent of Norzelia, which is split into three separate nations: The Kingdom of Glenbrook, the Grand Duchy of Aesfrost, and the Holy State of Hyzante. You’ll play as Seranoa, the young lord of House Wolffort, one of Glenbrook’s high houses. Taking place 30 years after a great war among the three nations, Triangle Strategy sees Seranoa and his closest friends and trusted advisors navigate a tense political climate between the three nations that threatens to thrust Norzelia back into all-out war. 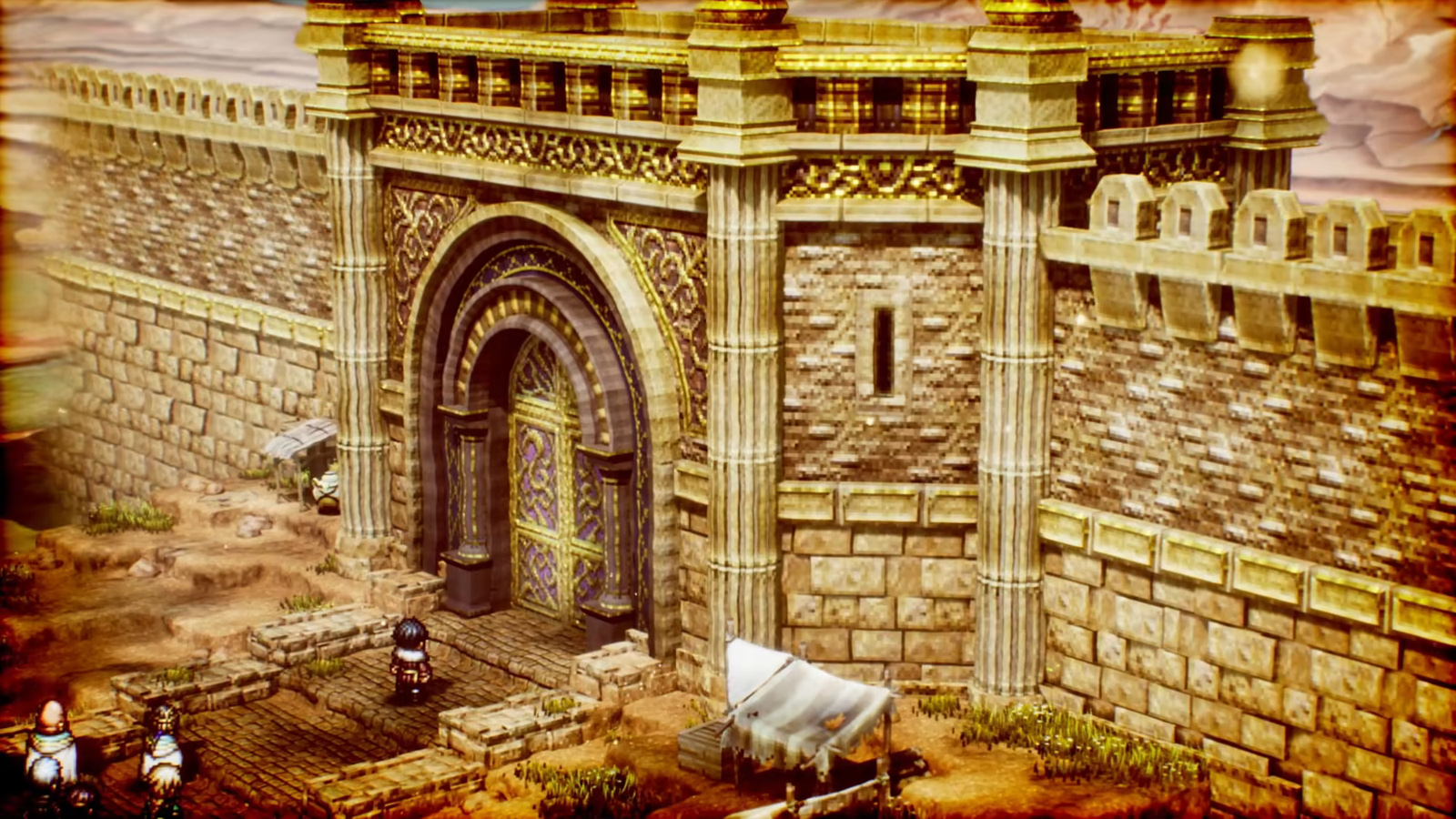 In the three nations on the continent of Norzelia, three main convictions rule all behavior: Liberty, Utility, and Morality. Your choices as Seranoa will dictate which convictions win out in deliberations and decide exactly what your small group will do throughout the game, and ultimately, will affect the outcome of the entire story.

As a grid-based strategy game, Triangle Strategy may look familiar at first glance but manages to differentiate itself fairly quickly. Like other strategy RPGs, battles will see you controlling a cast of characters on a grid-based field, but rather than each “side” getting a turn, turn order is assigned individually based on each unit’s speed stat. The field of play also features things like height-differences and various elemental states that can affect each tile, which in turn will affect the units that are on top of them – i.e. higher elevation can afford bow units a longer attack range, and tiles that are on fire will deal damage to units standing on them, while any units who stand on a frozen tile suffer from lowered accuracy. 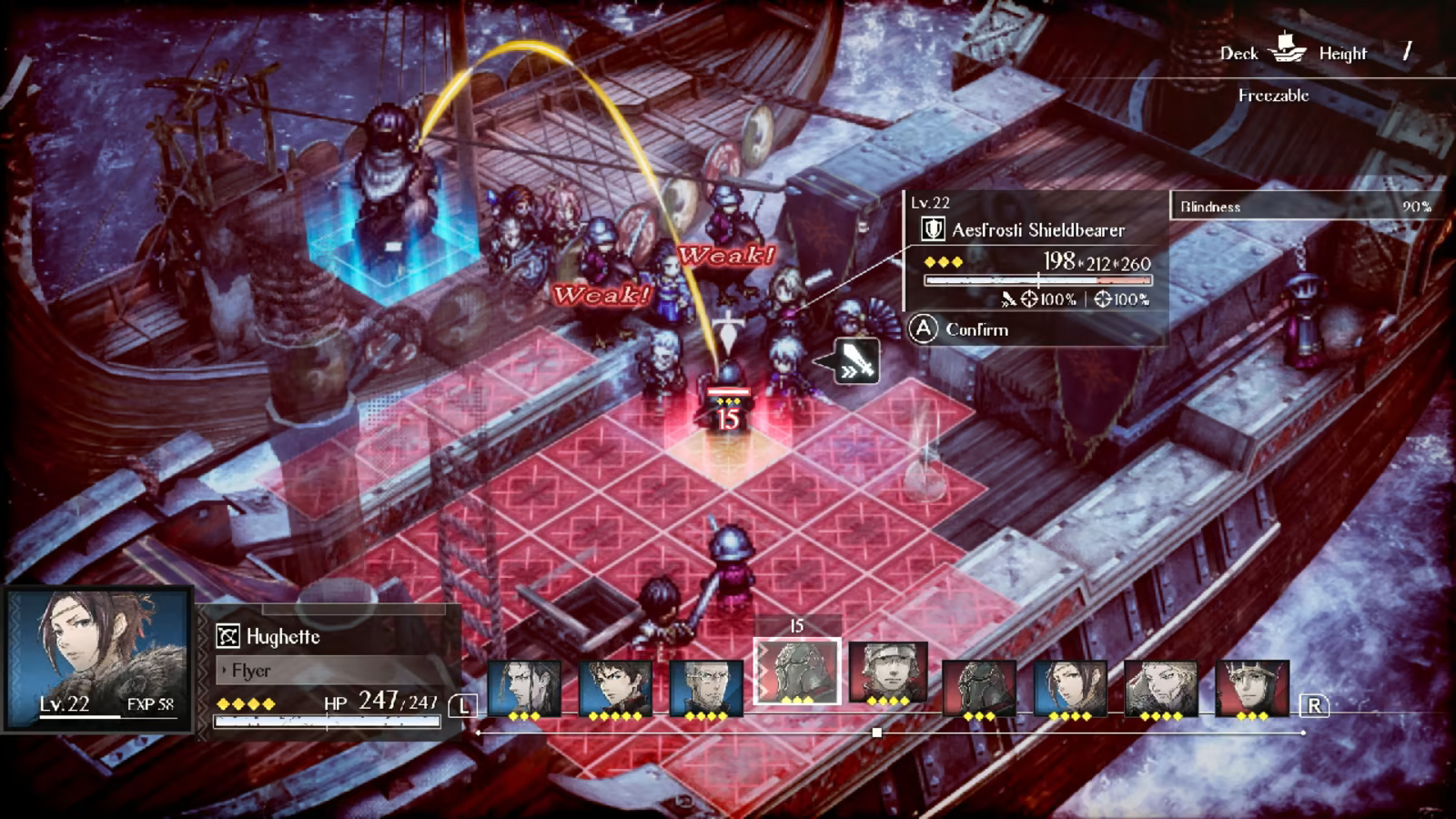 It took me a bit of time to get used to how the battles worked in Triangle Strategy, but once I had appropriately un-Fire Emblem-ed my brain, the way I strategized during battle started to click into place a little better. Triangle Strategy doesn’t have permadeath, so when you make a mistake that gets your units killed you can just say “Oops, I’ll have to do better next time.”

This lack of permadeath becomes even more helpful when it comes to harder chapters, since if you lose a battle outright, you keep any experience you gained and get to retry with your characters stronger than before. Some might argue that this makes the game too easy, but I found it refreshingly accessible, meaning I could just keep playing through the game rather than frustrating myself by beating my units against a wall without making any progress. 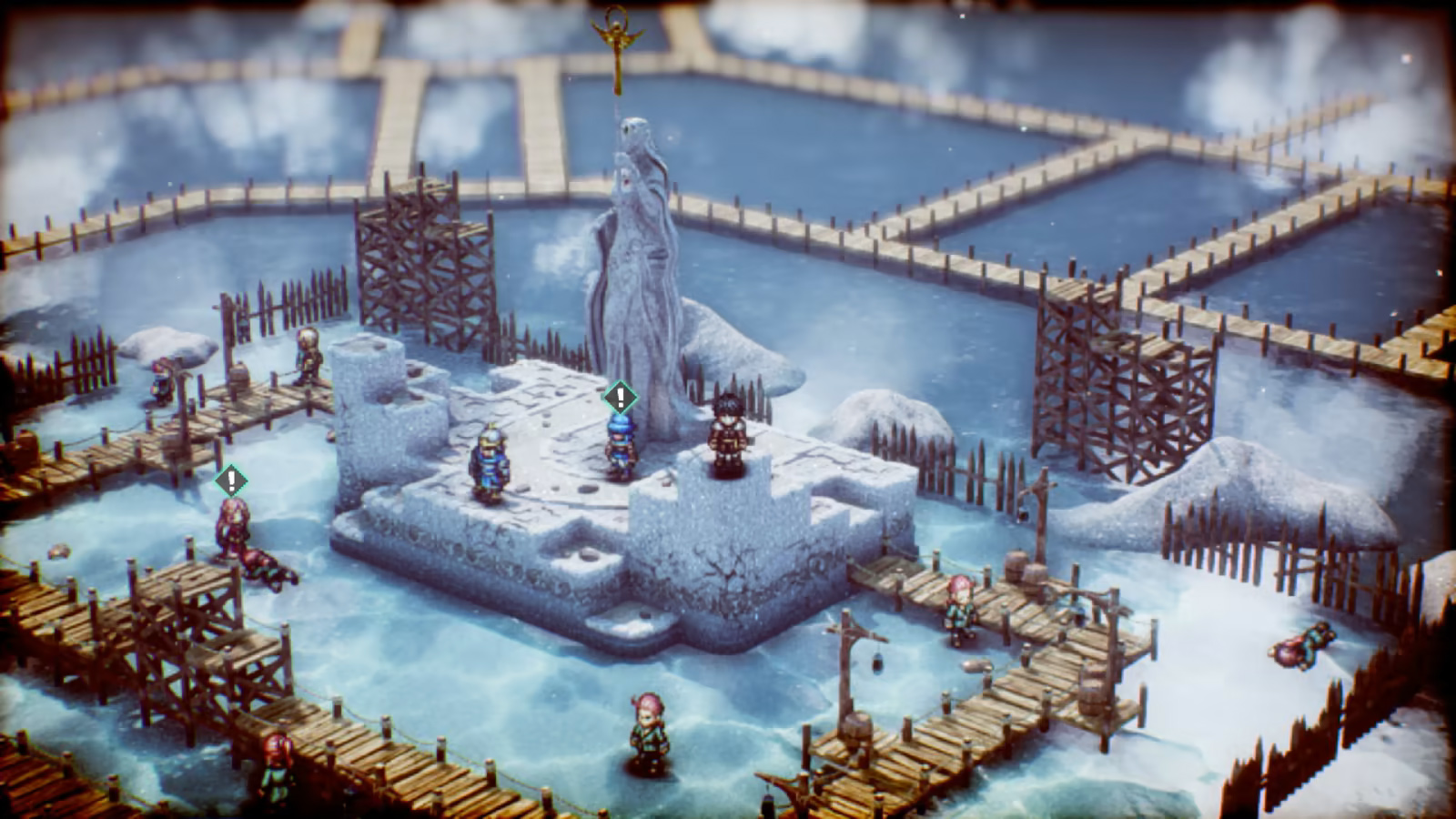 Battles aren’t the only gameplay you’ll be experiencing in Triangle Strategy though, as most chapters will afford you an exploration phase and a voting phase. In exploration, Serenoa gets to wander around the current environment, collecting hidden items and talking to characters to get more information about their situation, which can be vital when attempting to sway certain allies in the voting phase.

In said voting phase, the party is usually presented with two or three choices, which will line up with one of the three convictions, with each character usually having a default stance based on their own convictions. It’s your job as the player to pick which choice you prefer, and then you’re tasked with recruiting characters with opposing views to your side. Sometimes the information you gathered in the exploration phase is helpful here, as you can offer a point of view that might not have been naturally brought up in the story. Other times it will be impossible to sway a character, no matter what information you have, unless Seranoa’s own corresponding convictions are at a high enough level, and even then there will be times that certain characters outright refuse to agree with you. 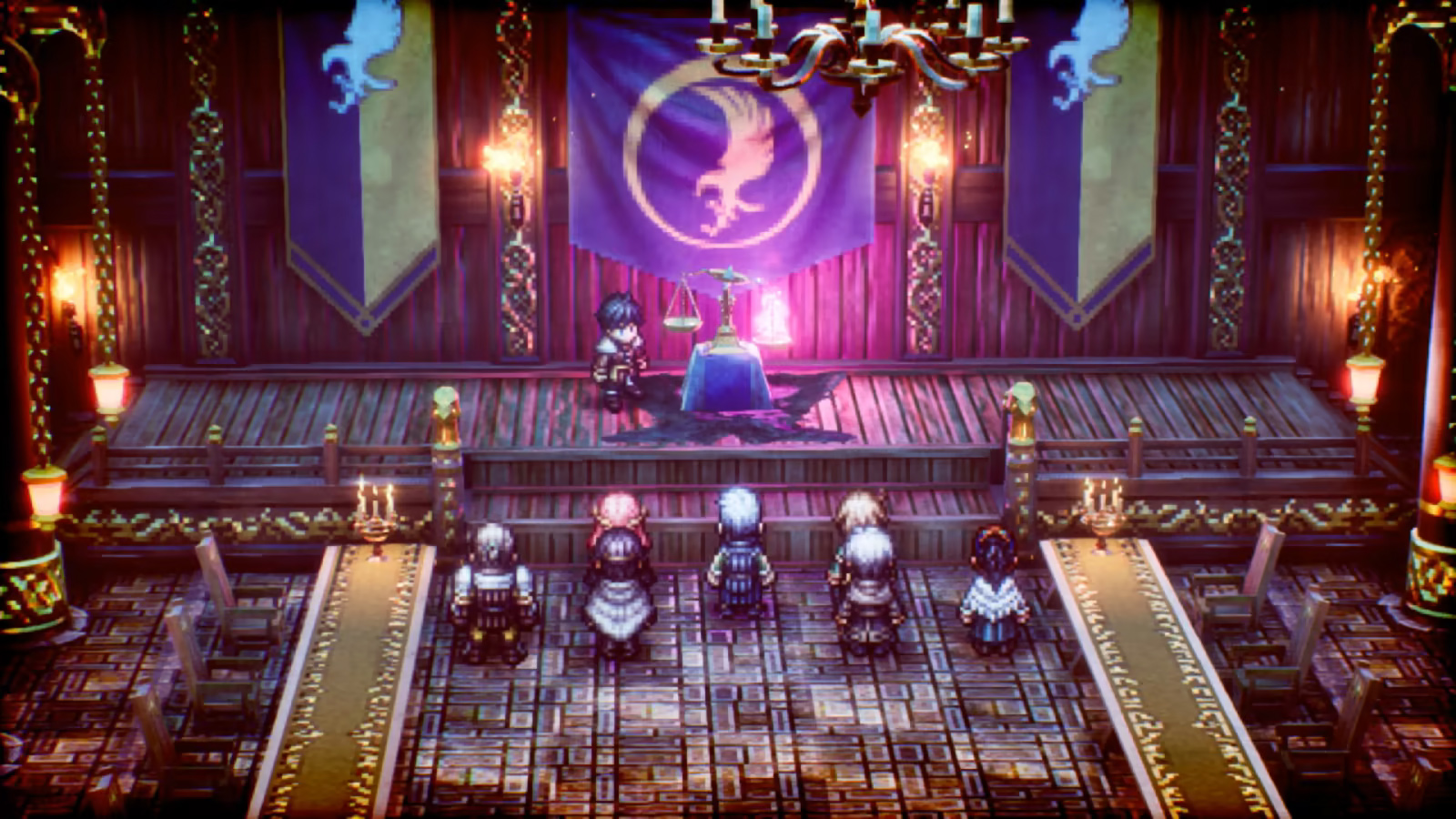 This cycle of explore, vote, and battle quickly became one of Triangle Strategy’s standout features for me. Learning how each of the main characters thought about different situations was incredibly enjoyable, and not only enhanced the story for me but also helped to round most of them out into more than just a one-note set of pixels.

Triangle Strategy is as much a tactical RPG as it is a political drama. If you’d have told me that, much like the recently released Elden Ring, this game was written with the help of George R. R. Martin, I would have readily believed you. There are twists, turns, deceit, love, and loss all throughout Triangle Strategy’s story, and I found it enjoyably well-written. Other players have been quick to call Triangle Strategy a “visual novel” with battles, which isn’t entirely untrue, but also wouldn’t be my first thought, having experienced the game for myself.

The beginning of the game does drag just a bit by trying to give context to what is nearly the entire political landscape of the story in a short amount of time, but it makes the rest of the game so much richer that I almost forgot about that gripe entirely by the later chapters. The story, in its entirety, is a wild ride, and one that I am glad to have experienced. There are twists and turns throughout, and it seems that just about every one of the plentiful plot threads is weaved in and out of the narrative incredibly deftly. 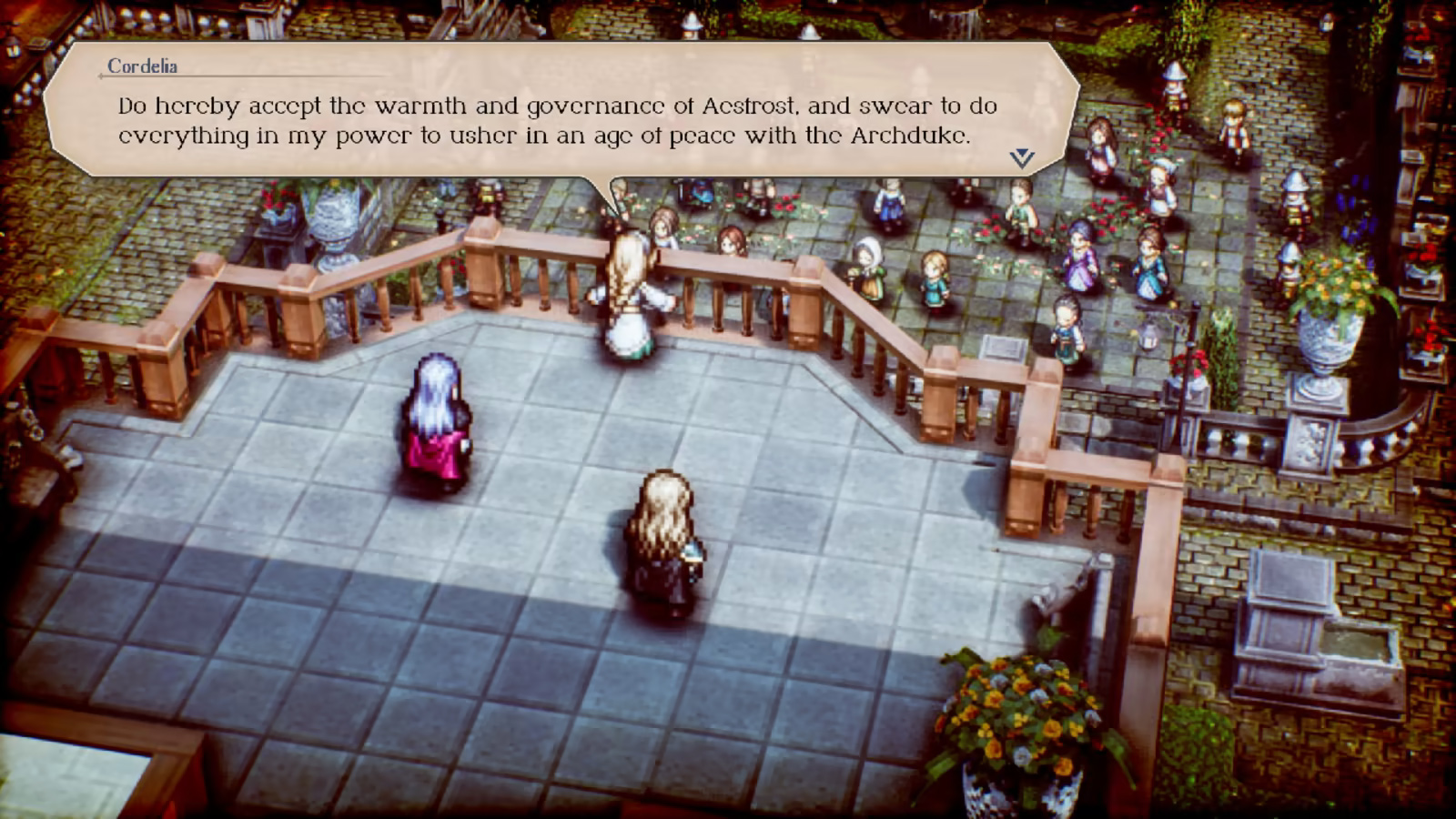 The biggest reason any of this sprawling political story works is the cast of characters you’ll meet. It’s a big cast even without any of the optional characters you can recruit to your army, but nearly all of them are well-rounded with real ambitions and ideals, save for just a few of the antagonists. Watching fleshed out characters interact and conflict with one another makes for a much more impactful story, and I think that’s why Triangle Strategy’s story felt like it hit me just right. As mentioned before, the beginning does drag a bit, but once you hit the middle of the game you really get to experience these characters reacting not only to the world around them, but how the events of the story are affecting them, and the context provided in the early chapters really helps those reactions make an impact.

The story itself has many branching paths, and which paths you play will be affected by which way your party votes in certain chapters. Ultimately, these paths usually converge back on set story points, with minor details that can change to reflect your choices. The game will reach one of three standard endings, though there is a fourth, somewhat secret ending that has a number of triggers throughout the game. I did manage to achieve the fourth ending for my review and, while I found it satisfying, I can definitely say that these triggers are a bit easier to hit once you understand the game better. There’s also a small change exclusive to the fourth ending that makes one of the later chapters of the game a bit harder, so the fourth ending is probably best saved for a New Game+ playthrough, unless you’re itching for a challenge.

The very first thing that drew my attention when Triangle Strategy was announced was the gorgeous character art, and the more characters I saw, the more I fell in love. It’s sad, however, that the game doesn’t showcase them more. Sure, the HD-2D look is as stunning as ever, especially with a fully rotatable camera, but it wouldn’t hurt to throw up a character portrait each time a character is talking. There is a lot of good art here that is easily missable, and I feel like the character portraits being present in conversations really would have helped drive the full voice acting home. 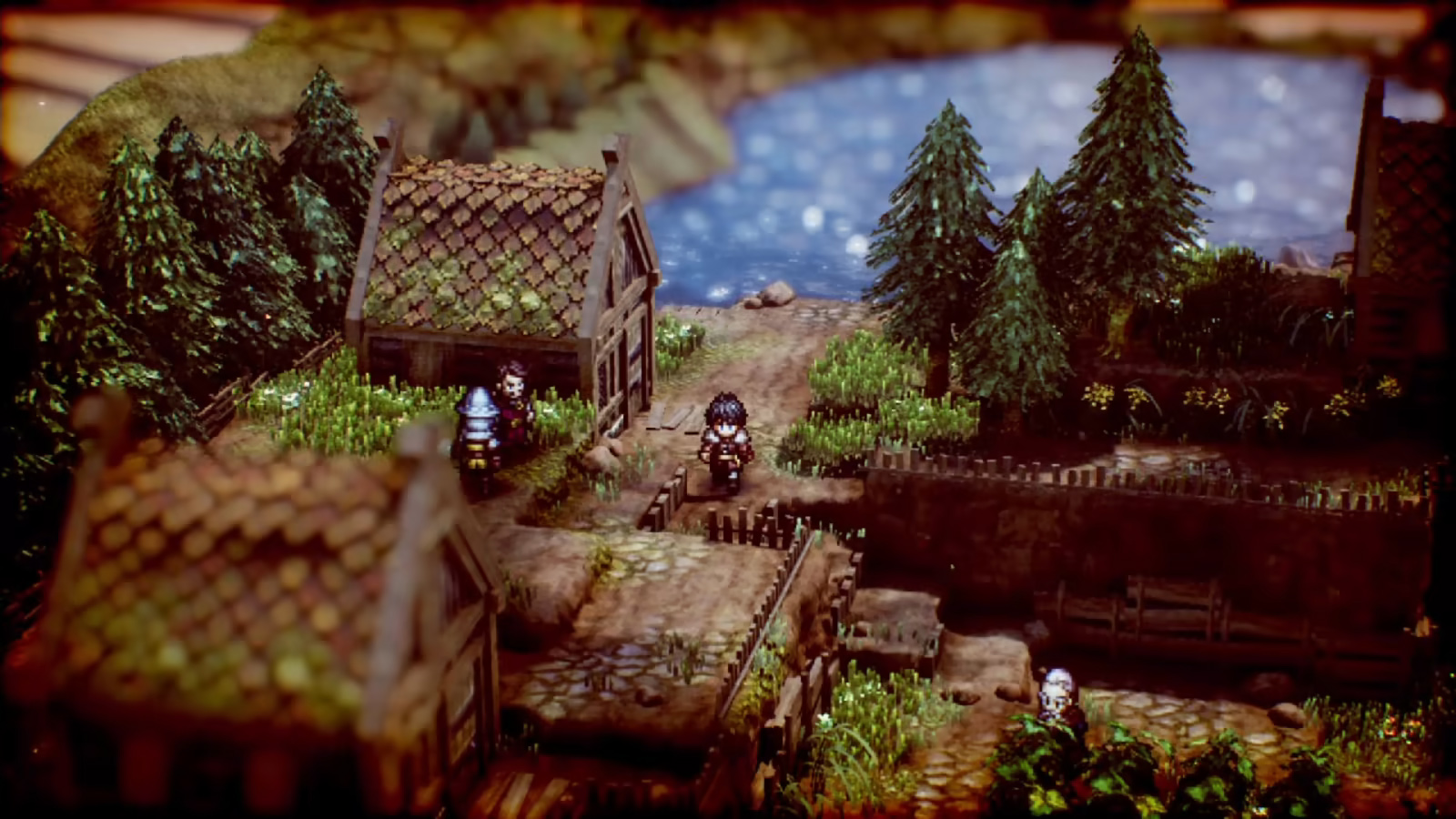 That being said, the voice acting in this game is very hit-or-miss, but when Triangle Strategy’s voice acting is good, it’s really good. Roland, Svarog, and Frederica were standouts for me especially in emotional scenes, though they weren’t always perfect. There are plenty of line-deliveries that sound just a bit off for every character, however, and at its worst the voice acting is so monotone and boring that I’m not convinced it was actually a human reciting those lines. No character is safe from a weird delivery, just when I’d find myself praising how great a character’s voice work sounded, they’d suddenly have a scene in which they were speaking as if they were reading from the script for the very first time.

The Triangle Strategy soundtrack, composed by Fullmetal Alchemist: Brotherhood’s Akira Senju, is, in a word, phenomenal. Whether the scene in question calls for grand regality, somber reflection, or eager preparation, Akira Senju has composed a piece that matches the mood perfectly. The tracks are memorable too – I’ve found myself humming various tunes from the game almost constantly over the last two weeks. I’m ecstatic to have found a new game soundtrack to add to the rotation for when I need a bit of instrumental music to help me focus when doing my daily work.

The Moment of Truth

Triangle Strategy is easily one of my favorite games to come out on Switch in the last year or so, despite a slow start and a few minor flaws. It’s a strategy game with enough unique mechanics that I never felt bored or like I had played anything like it before, and the story is ultimately a tale about the price people will pay to get what they want, and the consequences of the actions they’ll take in pursuit of their ambitions and ideals. I’m desperately hoping there is a follow up in the future, because Square Enix really blew me away with this one. 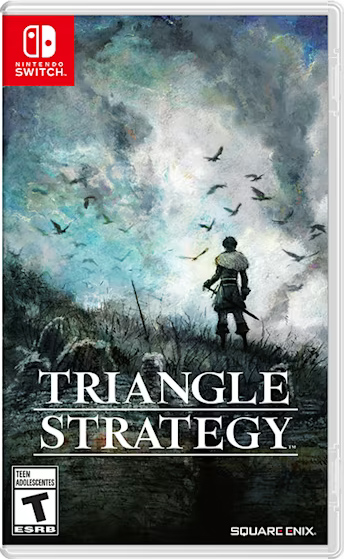