Review – The Legend of Heroes: Trails of Cold Steel III

It’s best to get this across right away – Trails of Cold Steel III isn’t the best entry point for the “Trails” series, which first saw an English release back in 2011 with Trails in the Sky for the PSP (now available via Steam). The franchise is lauded for its world-building, and Cold Steel III in particular expects you to have a basic familiarity with numerous characters and settings from across the entire saga.

That’s not to say it’s impossible to jump in here, though. Cold Steel III has a handy “Backstory” option on the main menu that sums up the first two Cold Steel games and offers a deep dive into major locations and conflicts that’ll prove important, and if you’re willing to sit down and give them all a read, you should be set. It’s not like you’d be alone in missing context either — two pivotal PSP games that are referenced extensively in Cold Steel III, named Trails from Zero and Trails to Azure by fans, have never been released in English officially.

Either way, no matter how you approach getting into the series, it’s very much worth the deep dive, because Trails of Cold Steel III is a blast for those looking for a substantial JRPG adventure.

The Trails series is set on the continent of Zemuria, which has just emerged from several wars and an industrial revolution analogue powered by “quartz” — refined crystals that can summon forth magic artes, power electronics, and even run a rudimentary internet system. The Cold Steel games in particular focus on the Erebonian Empire, one of the largest countries on the continent and a powerful military force. The two prior games dealt with a Civil War, while Cold Steel III deals with the wake of those conflicts and an expanding annexation effort on the part of the newly reformed government.

At the center of it all is Rean Schwarzer, a character cut from the standard “handsome & powerful anime teen” cloth who nevertheless proves incredibly charming and sweet, if a little oblivious sometimes. Once a student at the Thors Military Academy, he has since graduated and become an instructor at its new branch campus, built to deal with the students who just wouldn’t fit into the original, more refined location. 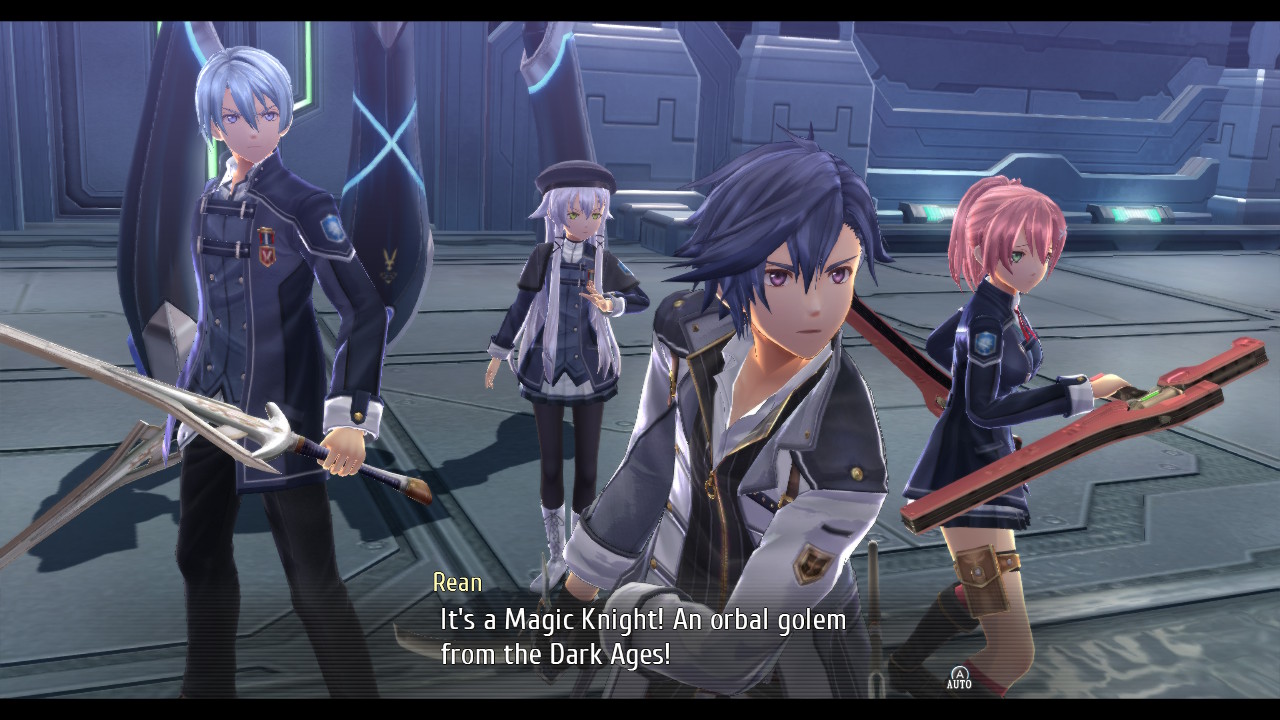 This marks one of Cold Steel III’s most interesting departures from the two earlier games. While those dealt with adolescent struggles, clearly drawing inspiration from the likes of Persona, the third game puts you in the shoes of a mentor figure. While the game unfortunately doesn’t go all-in and let you design lesson plans, it still gives you a fun perspective that isn’t often seen, especially in JRPGs, even if it’s a little silly how characters treat Rean as a wise authority figure when he graduated what is essentially high school mere weeks before he took up his new position as teacher.

Rean is given the task of looking after three students initially, who form the new “Class VII,” which he was a part of previously. One of these is a returning character from the last Cold Steel game, while the others are newcomers, and come with their own baggage and storylines. One thing that becomes quite clear with the Trails series is the level of detail afforded to every character’s arcs and backstory. While the main characters naturally get the lionshare of attention with the likes of Juna being especially cut up about being from the recently annexed Crossbell City, even minor characters are given gradually evolving stories. Take Kairi, for example; a boy from another class who curses his meek frame and wants to become “a manly Erebonian man.” Every time you’re in the school campus or the nearby village of Leeves, you can seek him out and talk to him to see a couple of sentences highlighting his development. 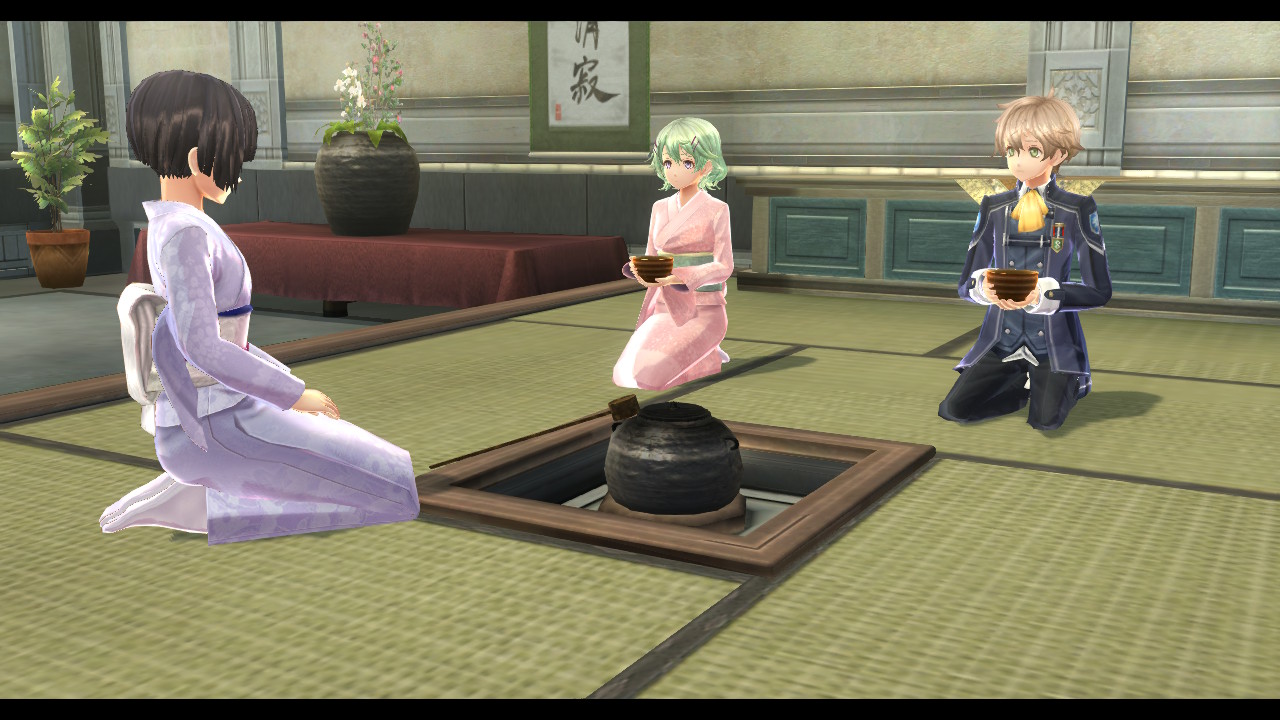 For some players this constantly evolving world could prove a problem — after every major story beat, the map changes, with characters moving positions and saying new things. While you can simply ignore these changes and only talk to a handful of them, or none at all, certain characters have logs in your Notebook that are updated as a result of these conversations, although admittedly with the absence of achievements on Switch there’s not much incentive to fill out these pages. Personally speaking, I love this aspect of the series and don’t find it tiresome, but I could see a lot of players growing frustrated with navigating the same town squares over and over again. Thankfully, there’s at least a judicious fast travel system that’s only a button press away.

While much of the game treats its world building seriously, there are a few bizarre tonal choices. The main antagonistic force in the game is Ouroboros, a secret society working from the shadows, capable of incredible magical feats all in the service of a mysterious master plan. The game often can’t decide if these foes are comical or intimidating, however. In terms of gameplay they very much fall in the latter camp — with intense, flashy special moves typically only seen from party members — but certain cutscenes make them out to be more than a little unprofessional. One scene that awkwardly stood out involves one female member of the group groping another for essentially no reason, which really didn’t fit the tone of the rest of the game up until that point, and was almost immediately juxtaposed by the two teaming up to attack a train full of teenagers. Thankfully, moments like that aren’t too common in the grand scheme of things.

The core gameplay loop of Trails of Cold Steel III is deliberately similar to the first Cold Steel’s structure, with Rean and Class VII embarking on “field studies” which typically involve going to a major population center and helping out the townsfolk. Inevitably, they run into a greater threat, whether it be jaegers (mercenaries for hire) or the aforementioned Ouroboros, which folds everything neatly into the main plot.

These quests can vary from being story heavy, with Rean and the gang chatting to a variety of NPCs and exploring nooks and crannies, or battle focused. Given how much I’ve talked about the story and its importance you might think the battles wouldn’t get much attention, but that’d be off the mark. 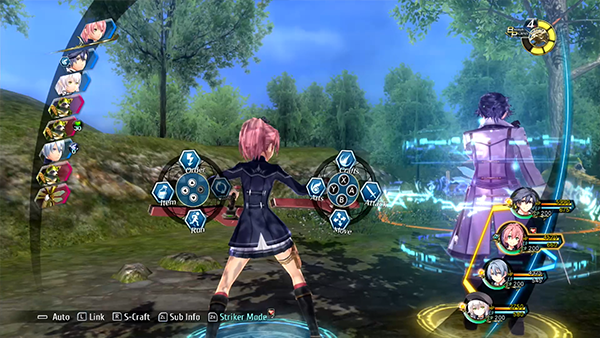 While the battle system in Trails can feel a little familiar to JRPG fans, that’s no bad thing, as it takes tried-and-tested concepts and refines them. For example, quartz can be slotted into your ARCUS (essentially a magic-enabling flip phone), granting you artes and stat boosts not unlike Final Fantasy VII’s materia system. The sheer number of quartz available, however, mean the customizability is off the charts. Want to make a character have ridiculously high evasion? Equip a bunch of green quartz and get some wind artes while you’re at it. Need a character who focuses on time magic to speed up allies and slow down foes? There’s a branch just for that. While there’s some guidance on what direction you should take each character (some ARCUS slots only accept a specific color), there’s still a lot of freedom to be had.

Battles unfold in a turn-based manner, though you have a lot of incentive to mess with the turn order, depicted on the left side of the screen at all times. Various icons can pop up there, such as “Critical Guaranteed” and “Arts Zero,” which grant you, and your enemies, tempting buffs that you’ll want to snag if you can. Speed adjusting magic can help, naturally, but there are also ways to delay foes outside of that, and if you have enough CP banked up (the green bar next to each characters’ portrait), you can unleash an S Craft — an extremely flashy and powerful move that “cuts in” to the turn order. 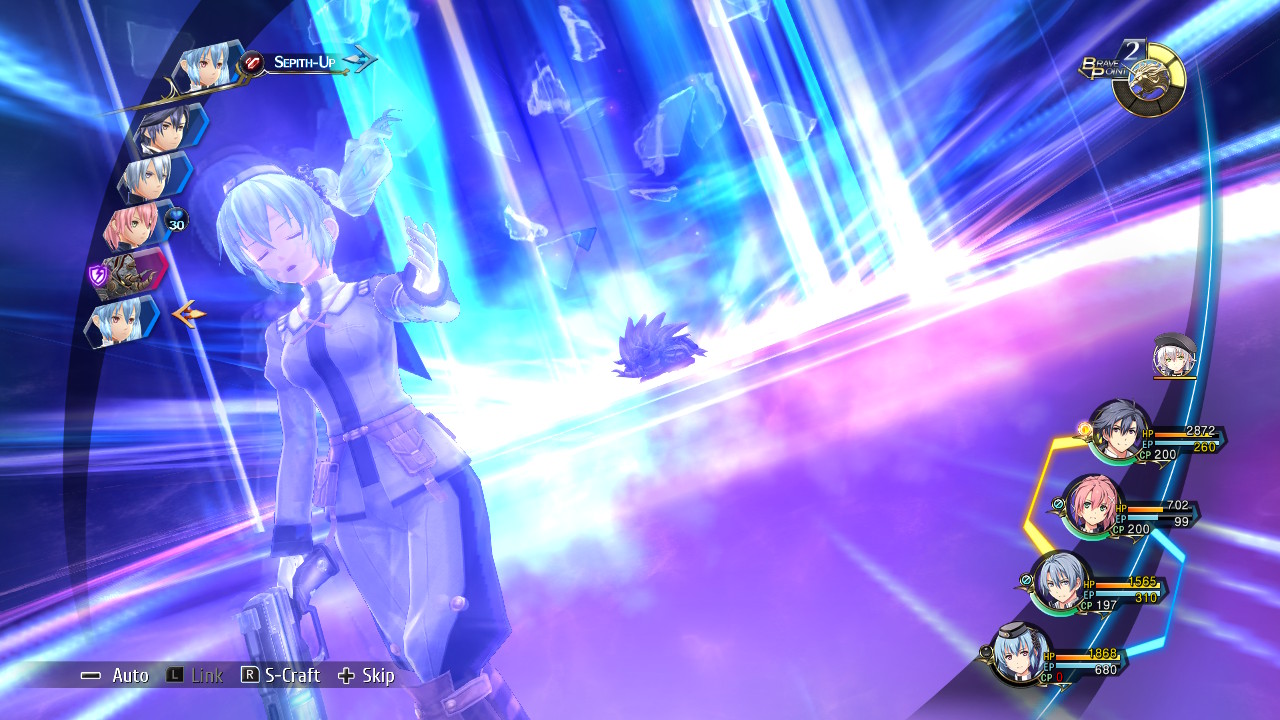 That’s not even factoring in elements like Follow-Up attacks (moves from your “linked” party members that ignore the turn order if you score a critical hit), elemental weaknesses, the new “Orders” system, and “breaking.” While it may seem daunting, once you get into the swing of things it’s genuinely one of the most satisfying and engaging turn-based combat systems out there, and one that’s just as deep as the series’ world-building.

Also I’d be remiss in talking about the gameplay without mentioning the surprisingly in-depth card game, Vantage Masters. Following in the footsteps of legends like Triple Triad and Gwent, you’re able to challenge various NPCs to a game of this one-v-one card battler. Winning nets you some of their cards, and there’s the option to build out your deck by buying more from stores. While it doesn’t have much to do with the main game, it’s an incredibly fun way to break up the pace and it can prove genuinely strategic. 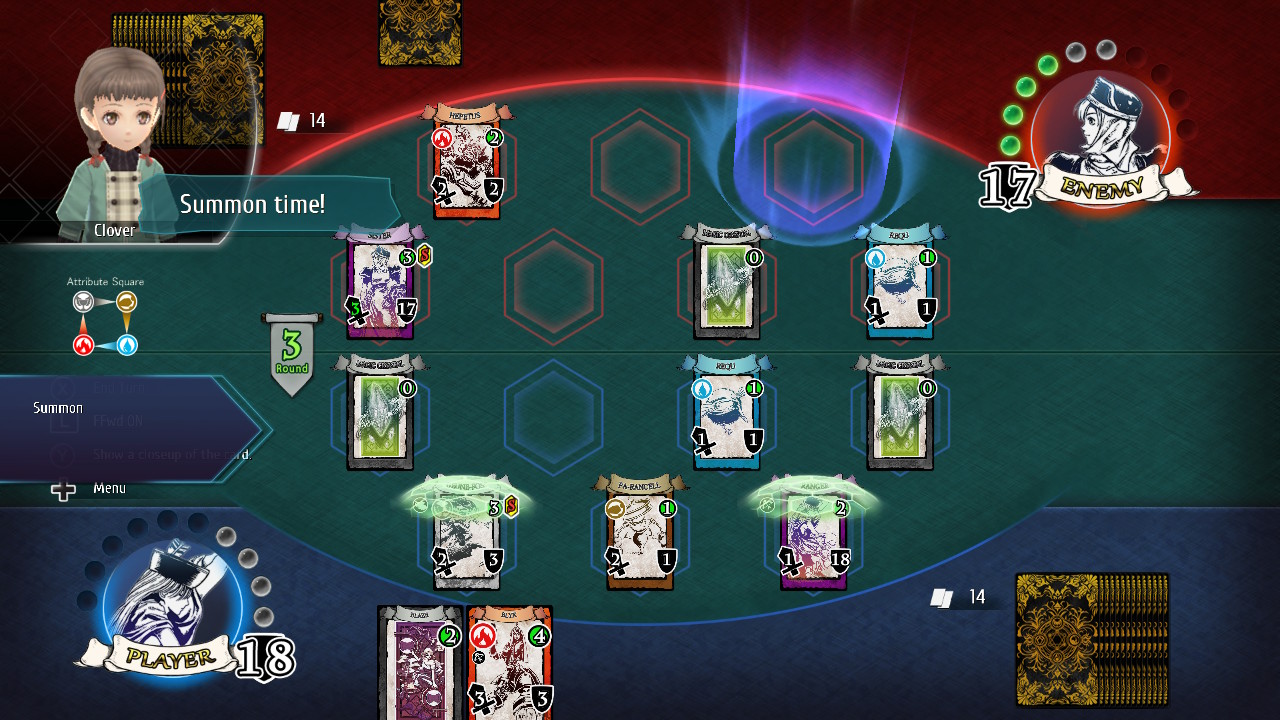 And then there’s the fishing, the occasional swimming interlude, the giant robot battles… There’s just a lot to do, is what I’m saying.

Songs to Slash to

Falcom is a developer of limited means, primarily developing for PlayStation 4 and relying on outside companies to port to other platformers. Trails of Cold Steel III marks the company’s second game on Switch, after Ys VIII, and it comes courtesy of NIS America, the studio that also localized the game for PS4 last year. It looks great, with the game’s relatively simplistic graphics and bold colors popping on Nintendo’s system. My only real issues I’ve noticed are the jagged edges that result in trailing pixels on some narrow objects, visible level-of-detail changes on some large textures during a few camera pans, a few abrupt brief pauses in one area, and a small, barely readable font that crops up at the top of the screen whenever you enter an area (though that one isn’t really important).

NIS America also knocked it out of the park with the localization, which is mostly of equal quality to the stellar work done by XSEED, the studio that previously handled the Trails series’ English versions. The voice acting is fantastic, with most all of the talent returning and bringing their best. Unfortunately, it can be inconsistent just when voice overs will crop up — you could be watching a scene play out only for it to cut out entirely in favor of text, or an NPC will have it and Rean won’t. Given the sizable script it’s understandable, but it can be a bit jarring. 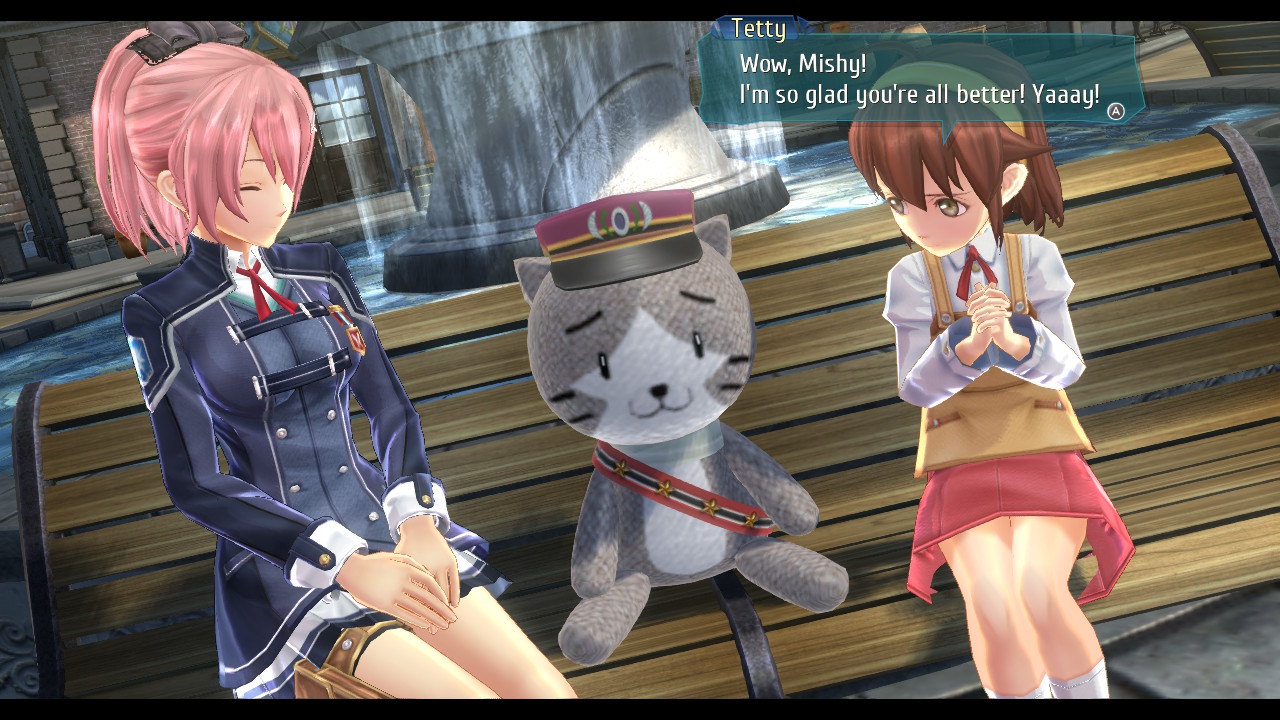 Finally, there’s the soundtrack, which is naturally brilliant, being from Falcom’s iconic sound team. You’ll hear shredding guitar riffs in battles and beautiful folksy strings as you travel through a mountainous valley, and it’s all a joy to listen to.

Trails of Cold Steel III is a fantastic RPG with deep gameplay mechanics and a dense world to explore, but not one I’d feel comfortable recommending to those unfamiliar with the series. If you’ve got a working knowledge of the other Cold Steel games, though, you’re more than ready to delve deep into its messy web of conspiracies, politics, and head pats. Just get ready to start wishing for a late localization of the Crossbell games once you’re done… 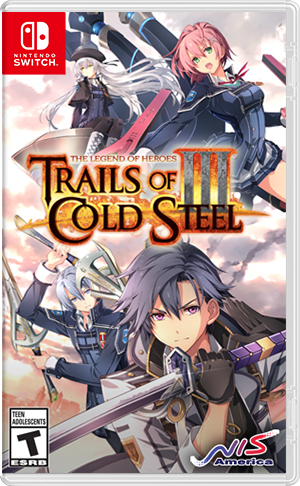