The Taiko no Tatsujin series has been making noise on consoles, handhelds, and in arcades for almost two decades, and for the most part it’s consisted of cute and colorful rhythm games, where the main focus is offering up a selection of music to play at your leisure.

In 2014, however, Namco Bandai shook things up with Taiko no Tatsujin: Don to Katsu no Jikū Daibōken on the 3DS, which offered up a relatively substantial RPG-style story mode alongside the traditional rhythm game (now labelled Taiko Mode). Now, half a decade later, that game and its sequel have been ported to Switch and have finally received a localization.

Before tackling the RPG mode its worth touching on the core rhythm game gameplay first, as it’s naturally omnipresent throughout the adventures.

The rhythm game involves hitting a traditional Taiko drum in two ways (in the middle, a “don”, or on the rim, a “ka”) as color-coded notes reach the left-most point of the screen after scrolling in from the right. It takes a matter of seconds to get used to it, even fewer if you’re already familiar with rhythm games, and soon enough you’ll be jamming along like it’s second nature. 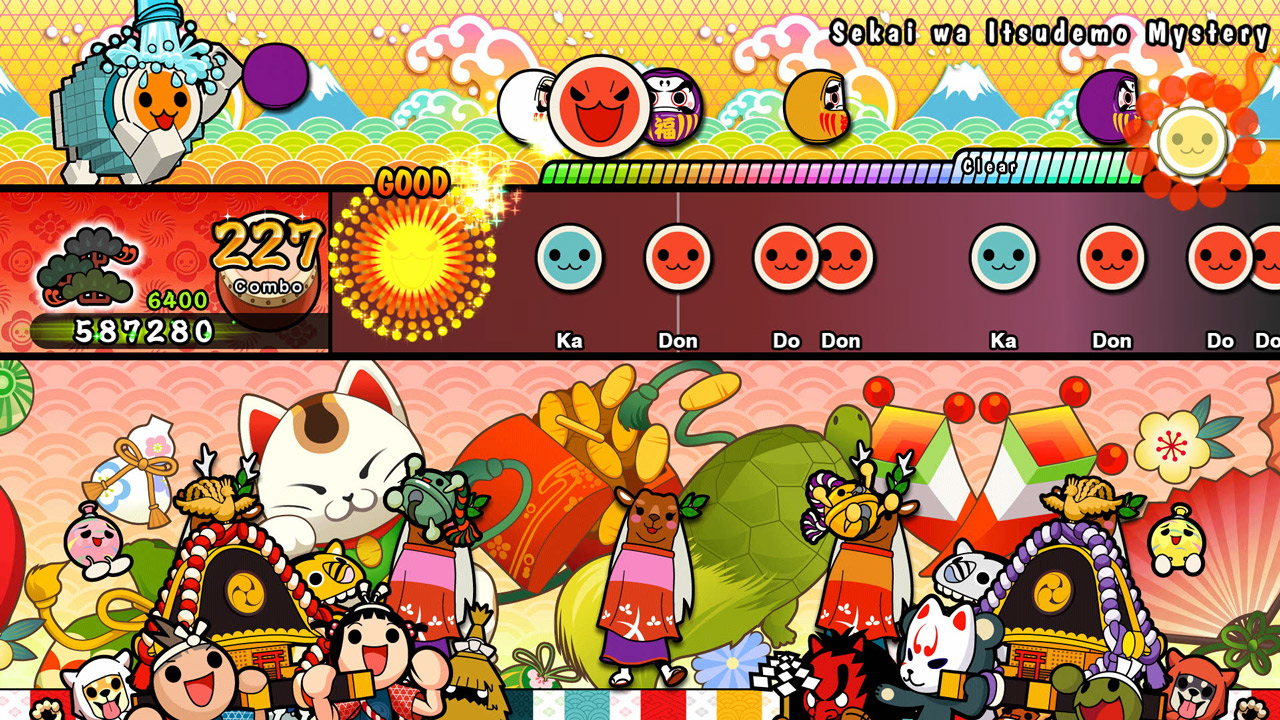 Various control schemes are supported in Taiko mode. There are the buttons (which have various layout options), a touch screen drum, the ability to play with Joy-Con motion emulating the instrument’s traditional sticks, or the official drum peripheral. All of these work reasonably well once you get used to them.

What is unfortunate, however, is that the RPG mode only allows button controls. This makes sense to a degree – you’d need to swap to using the analog sticks to move around the map in between rhythm sections – but if you’ve spent money on the drum controller it can feel a bit frustrating being unable to utilize it.

Just like the previous two localized Taiko games for PS4 and Switch (Drum Session! for PS4 and Drum ‘n’ Fun for Switch), the song-lists are left as they were in the original Japanese release, featuring Japanese pop music, anime theme songs, Vocaloid tracks, some classical tunes, and more than a few are pulled directly from video games. While the individual adventures feature far fewer songs than Drum ‘n’ Fun, when put together the selection is pretty solid.

Of course the main appeal of these games isn’t so much the standard rhythm gameplay as it is the RPG adventures, and they are undeniably unique.

Both are brought to Switch resembling their original 3DS releases in terms of mechanics. This means that the first Rhythmic Adventure Pack, Space-Time Adventure, is decidedly less refined than its sequel, so it’s definitely worth playing them in order even if their stories are unrelated.

The first game features series mascots Don-Chan and Katsu getting involved in a quest across space-time alongside a time-travelling rabbit called Tocky to find the parts of his ally, a small pocket watch called Ticky.

It’s very much a tongue-in-cheek journey featuring plenty of time-travel tropes and it doesn’t take itself all that seriously – there’s no butterfly effect to worry about here. This means plenty of absurd situations like Oda Nobunaga chatting to Marie Antoinette about interior decoration. 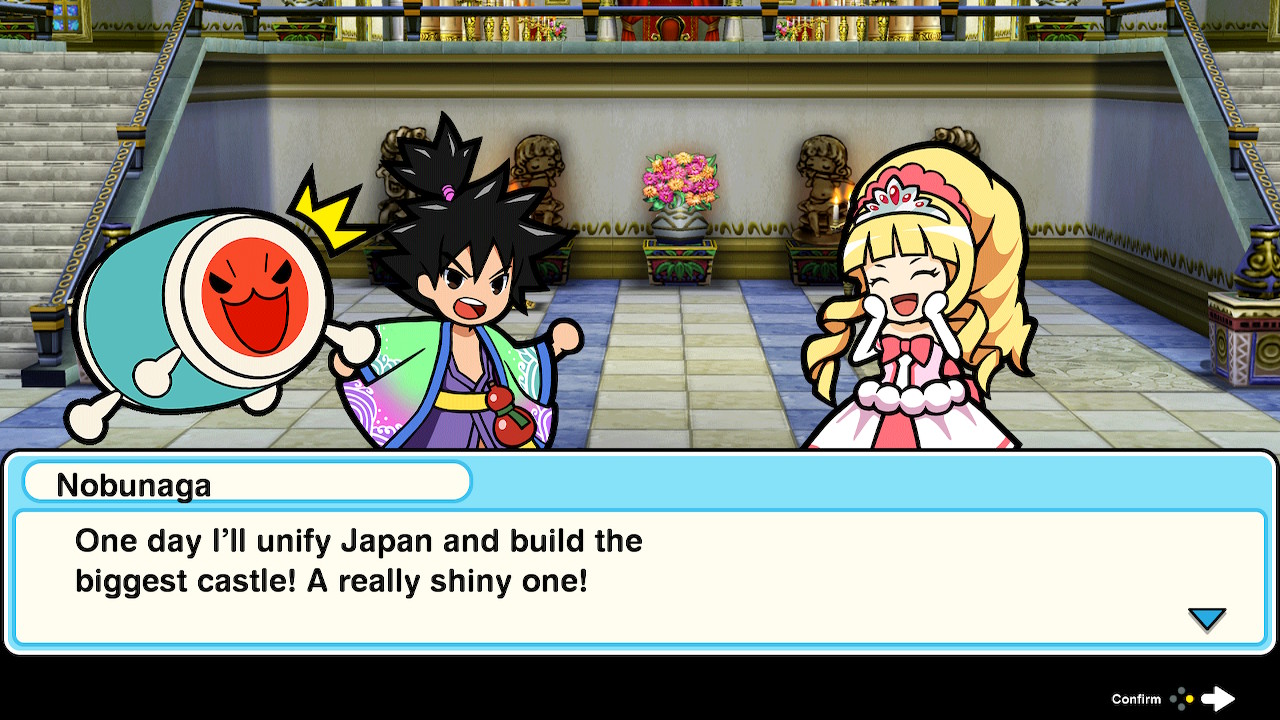 This time-travel also lends itself well to a variety of locales to visit, from ancient Japan to Egyptian pyramids, which in turn means there are plenty of interesting themed enemies to chance upon.

That brings us to the RPG elements, and they’re unusual, to say the least. Throughout the adventure, Don-chan will recruit dozens of allies, either through the story or by chance after a battle, and you’ll organize them into a party. In the first game, this consists of four slots, with a front and back row, though certain larger enemies will take up an entire row.

There are no battle menus to leaf through, however. The most combat influence you have in the first game comes from playing the rhythm game – performing well will result in your party attacking the enemy, while performing poorly (getting “OK”, “BAD”, or “MISS”) will result in the enemy attacking you. You’ll also fill a Charge gauge during gameplay, which fires off a powerful attack once you fill it up.

Stats still matter, though, as do abilities – increasing the former makes battles go by much faster, while the abilities earned by befriending allies or through skill books can alter things like recruitment rates, attack speed, and more besides. EXP is also gained through combat, though thankfully it’s shared through your entire party, so there isn’t much in the way of grinding levels.

Additionally, Don-chan can buy and equip various cute outfits that similarly boost various aspects, though unfortunately these costumes are only seen in the battle screens and in Taiko mode – not on the overworld map. 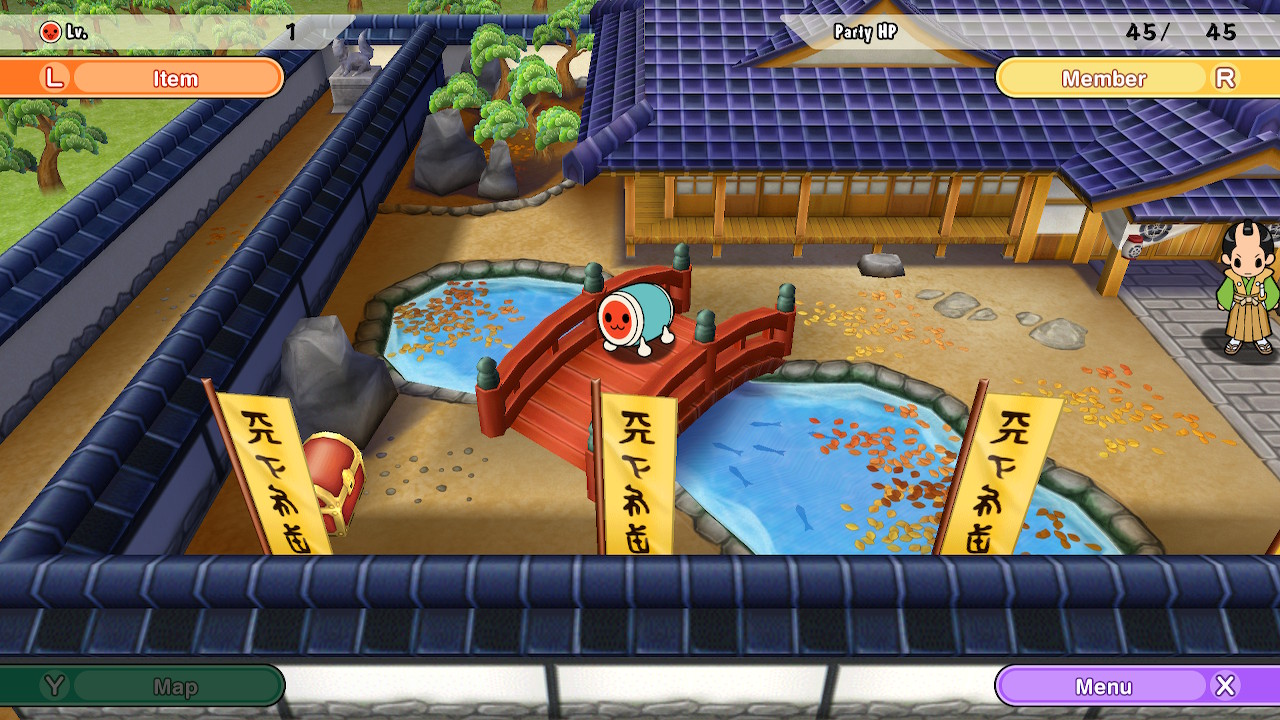 All of this does reveal a bizarre byproduct of the RPG mode – playing through a whole song is actively discouraged. If you make it all the way to the end of a track the battle will simply end in a disappointing Draw, an outcome that’s down to poor playing or your party simply being too weak to defeat the enemies in time. If you want to enjoy the songs in their entirety, you’ll be better off diving into the Taiko mode.

Couple this with the fact each area has its own limited pool of songs and things can feel repetitive as you play through the opening twenty seconds of a Kamen Rider theme song dozens of times as you’re assaulted by random encounters.

Boss battles do thankfully throw an interesting wrinkle into the standard gameplay loop, as they unleash special attacks that can obscure and alter the “lane” of rhythm notes. These will genuinely trip up even the most seasoned of Taiko pros, and as a result these fights are where you’ll actually want to pay attention to your party’s stats. 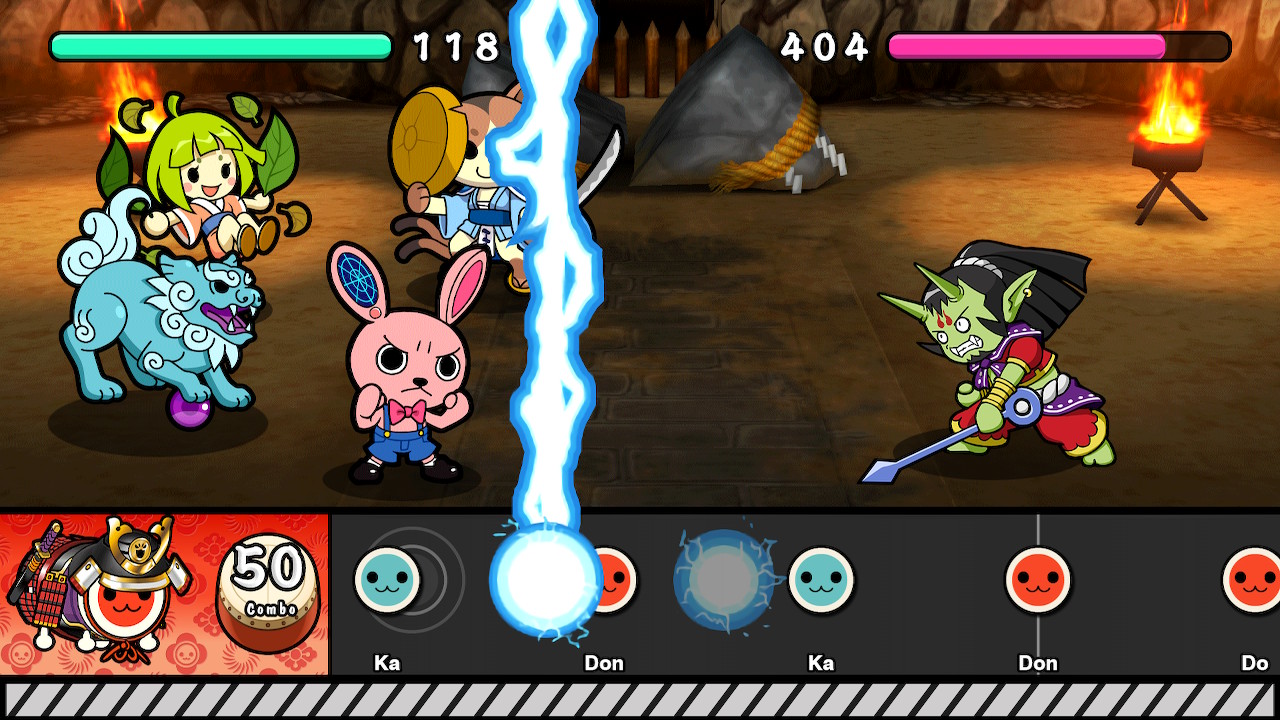 As mentioned earlier, the second game’s Mystery Adventure refines a lot of these gameplay elements.

For instance, while you’ll still rarely hear entire songs, the sequel introduces more generic tunes for weaker enemies that have simpler rhythms more befitting the faster bouts. Even better, random encounters are replaced by the enemies appearing on the overworld (in two forms – red means powerful enemies, white means weaker), and you only engage battle if you bump into them. Couple this with the ability to shoot out Katsu to intercept them and you can avoid combat whenever you wish (with good aim). 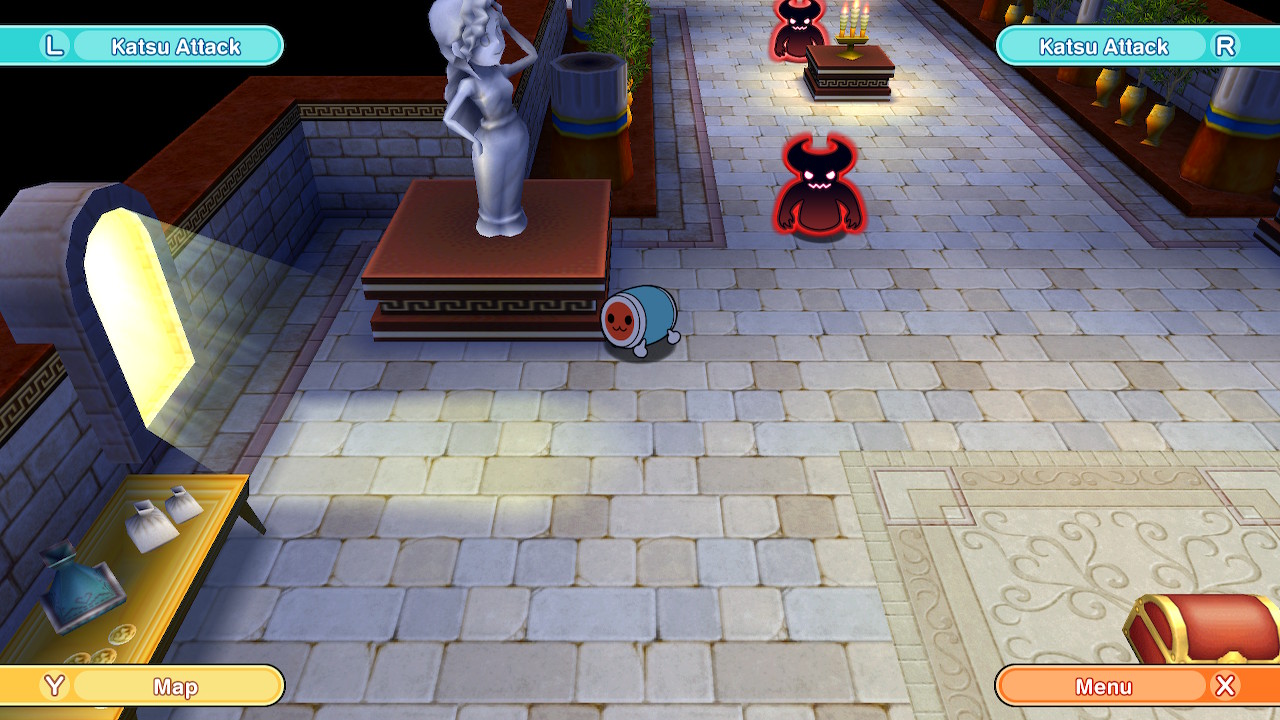 The party system is also significantly overhauled for the second game, with three rows of three and a max limit of characters being determined by a allocation point system. Party placement is much more important as a result, with each character having a different strength (close-range, magic, healer, etc.) that necessitates clever placement on the board.

One of the most integral changes comes to the Charge system, which is swapped out for a Taiko Magic meter. This fills up in much the same way as the bar in the first game, but you have direct control over when it activates, and there are even multiple spells to unlock. In the first adventure, you could often find your Charge meter going off against a single, low-health enemy, even if you’d rather hold onto it for a more imposing encounter. In the second game, it’s instead activated with a simultaneous press of ZL and ZR.

Unfortunately, for all the improvements Mystery Adventure makes in terms of mechanics, its narrative doesn’t feel quite as strong on the heels of the first game’s. While the set-up is similar – Don-chan and Katsu get roped into a sci-fi adventure with two major side characters, this time the ancient protector of Earth Tia and her companion Popo Kaka – it unfolds in a way that feels less creative. 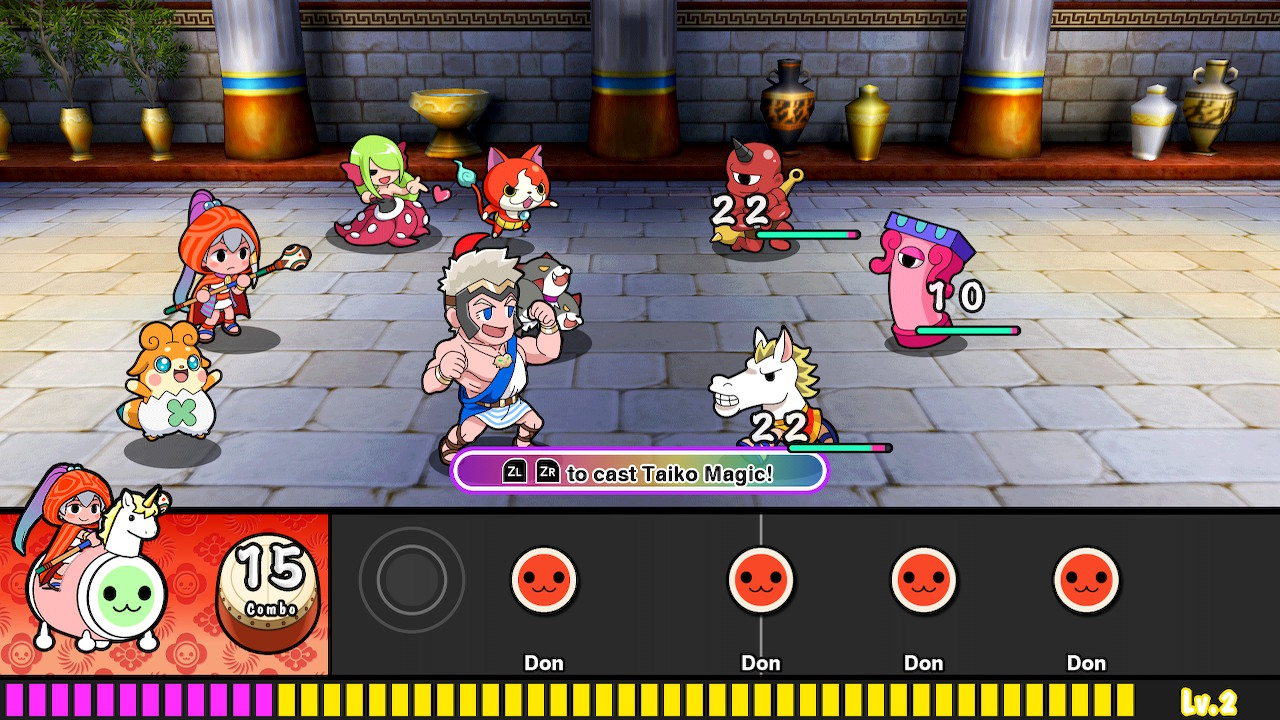 The story focuses on ancient dragons awakening across the globe, simultaneously triggering the revival of ancient civilizations. Don-chan and pals set out to defeat these ancient beings, collect the Ooparts artifacts, and save the world. This can often feel like a weaker, less-focused variation of the time-travel narrative of the first game with a bit less heart, even if it more successfully riffs on traditional JRPGs.

Similarly, the party interactions are practically nonexistent in comparison. In the first game, each recruitable monster has their own dialogue upon joining the party, and once you maxed out the friendship meter they’d share a few more lines and give you a gift. It was basic to be sure, but it provided an incentive to frequently switch your party up.

Mystery Adventure, meanwhile, treats most of the recruits as literally expendable, with it being encouraged to fuse them onto your more powerful characters to boost their stats. You can even recruit more with the use of gacha-like coins. 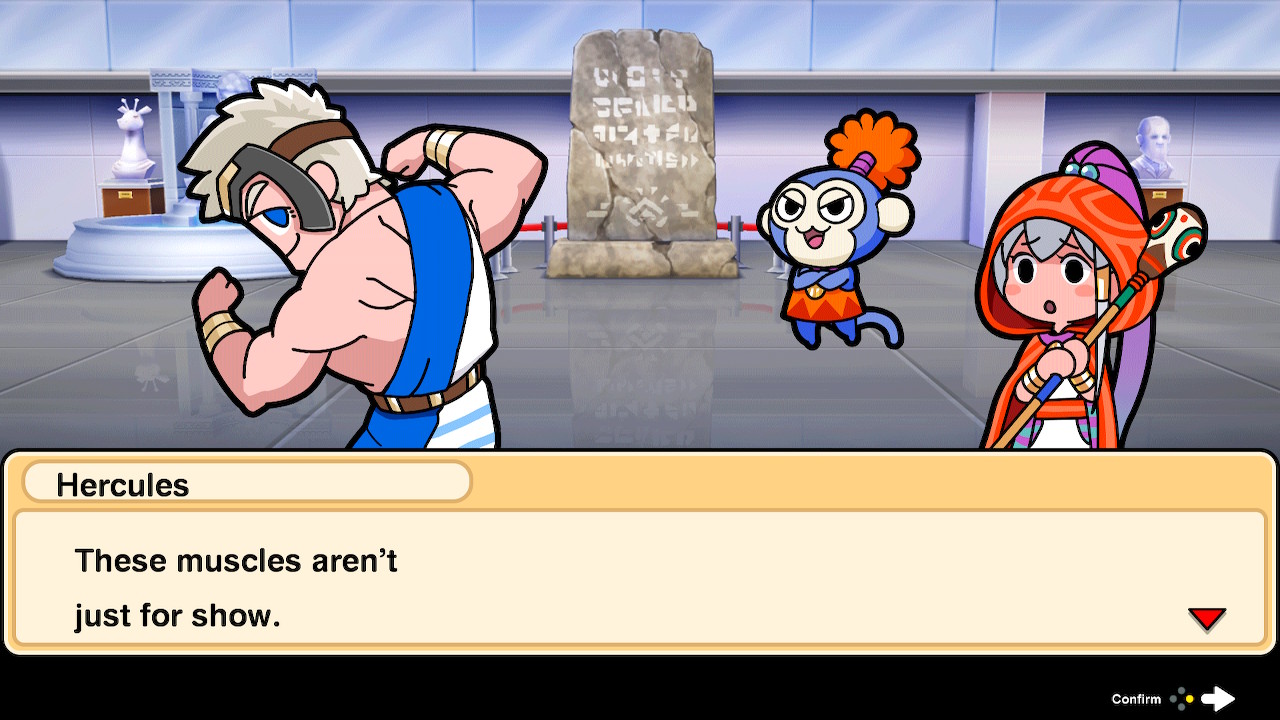 So, while mechanically superior in pretty much every way, Mystery Adventure misses quite a bit of the charm of the initial adventure, and it’s a shame elements from both weren’t combined in the porting process to make both games the best they could be.

One of my biggest takeaways from the Taiko no Tatsujin: Rhythmic Adventure Pack is how it would be a perfect entry point to traditional Japanese RPGs. The core concepts are there – a top-down explorable world, treasure chests, party management, skills, dungeon puzzles, EXP… But the fine minutae that might put off newcomers is practically absent – simply being good at rhythm games is more valuable than figuring out the best combination of stats and abilities.

So if you’re someone interested in JRPGs but yet to take the plunge, the game’s a great starting point, and if you have kids? I couldn’t recommend it enough. 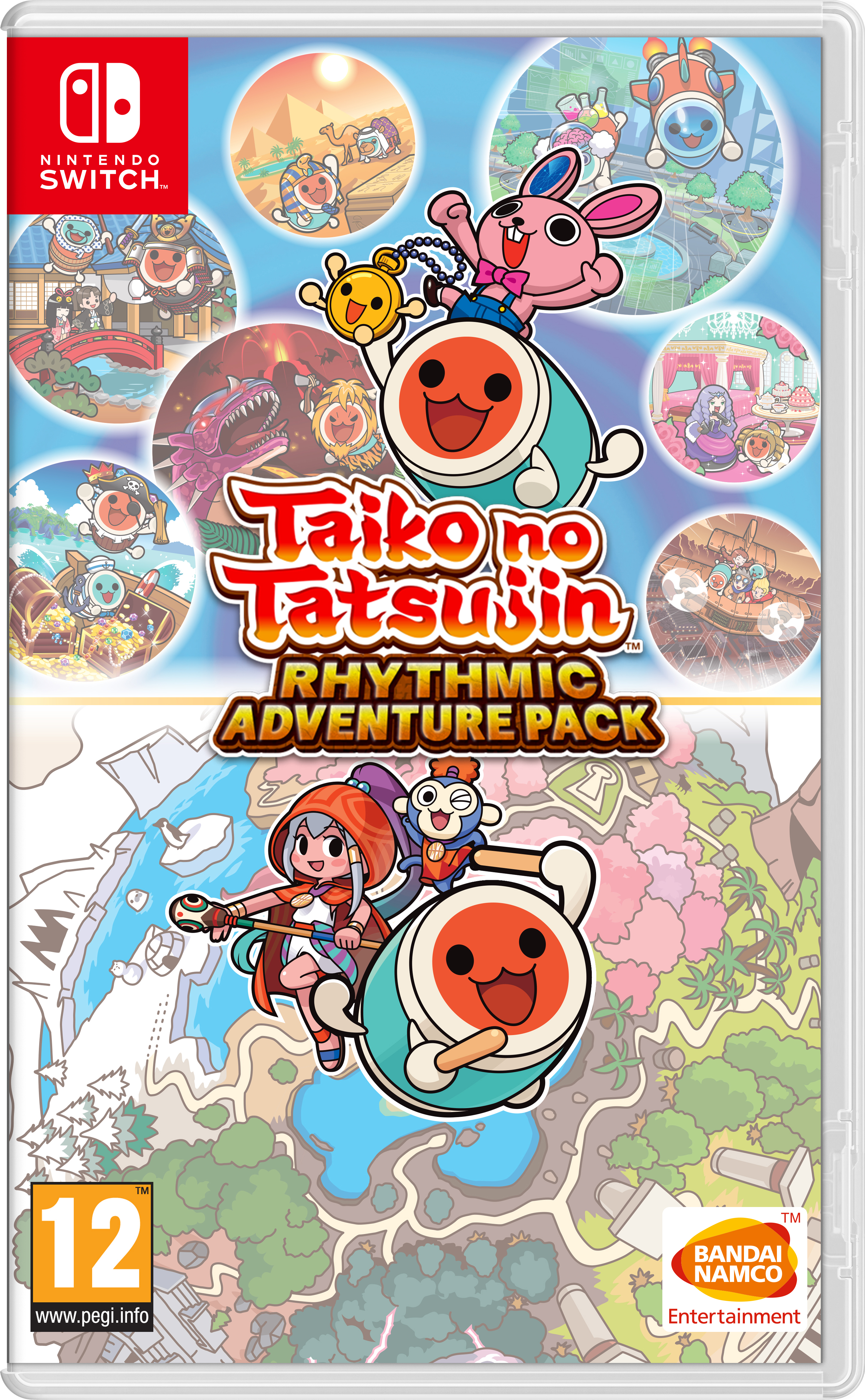