When AiAi and the gang rolled onto the GameCube twenty years ago, I had to fortune of receiving Super Monkey Ball right there at launch. Its blend of tight, precision based gameplay and more relaxed minigames made it a favorite for myself and many more, leading to what’s generally accepted as an even better sequel. Things may have gotten bumpier after that point, but there was no denying Monkey Ball’s peak entries.

Sega seems to be in agreement, as after an HD return of the Wii’s Banana Blitz two years ago they’ve gone even further back to gift us all Super Monkey Ball Banana Mania. While the entire package is looking much more modern, the return to the series’ highpoints means over 300 courses to roll through and a dozen multiplayer friendly party games. Served with some extras and plans for future additions, there’s a case to be made that Banana Mania is the best the series has ever been. 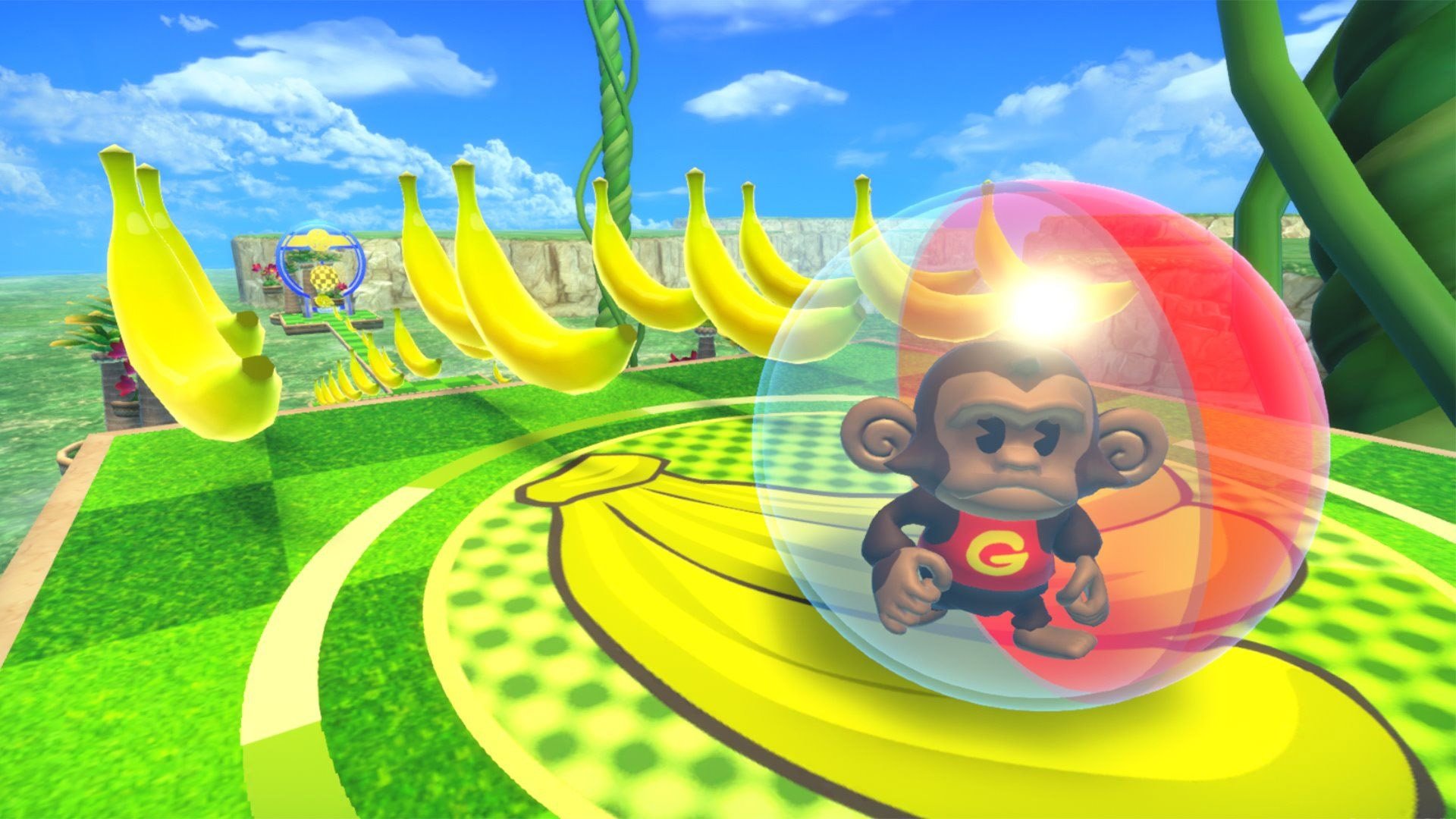 The bulk of your time will be spent in the Main Game, where the series’ trademark precision based gameplay and imaginative courses can be found. This is further split between courses from Super Monkey Ball and Super Monkey Ball 2, letting you roll through batches based on difficulty.

As I’ve covered previously, Monkey Ball’s greatest strength lies in the stage design, and Banana Mania delivers on that front. The updated presentation may draw you in but it’s the sense of wondering what you’ll be dealing with next. You’ll start by rolling along plain and pleasant slopes, but soon twisting platforms and bizarre architecture work their way in, immediately enthralling – the monoliths our cast of primates have gathered around.

Now, it isn’t all sunshine and fresh bananas for these monkeys. The difficulty in Monkey Ball has always been peaks and valleys as opposed to a gradual incline – some stages can be maddeningly difficult and demanding when it comes to timing and keeping a steady hand. For me that’s part of the appeal, though it can lead to repeating the same course again and again and again until your hard work pays off. Or, if you’re like me, you occasionally say screw it and barrel ahead at full speed and hope for the best. 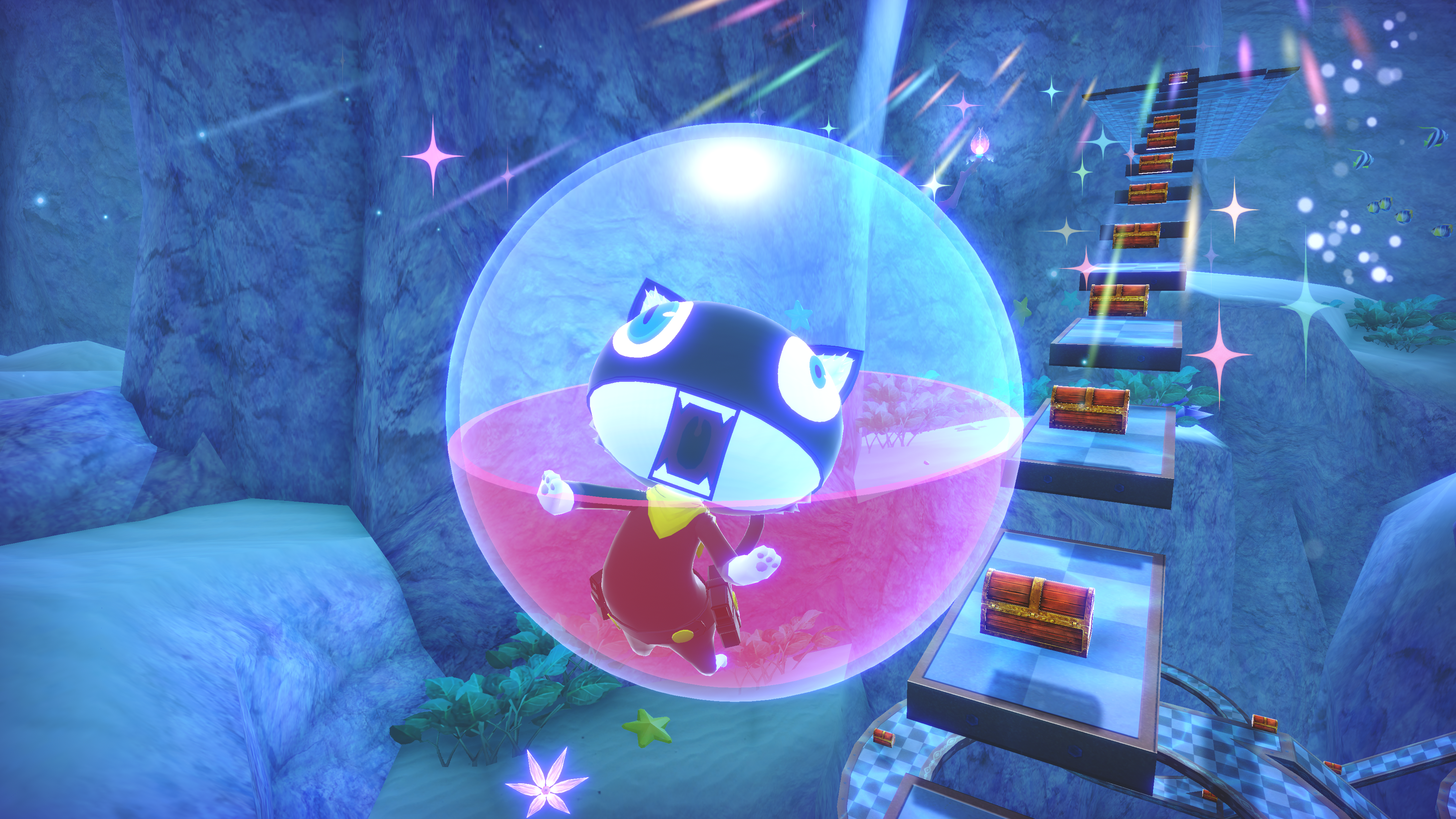 While the first game’s courses aren’t slouches, there’s a definite jump in creativity and abstract appeal from Super Monkey Ball 2’s offerings. It’s fitting then that these get to be the star of the show in Banana Mania’s Story Mode. While it was fun seeing 2’s plot retold in a more minimal way, ultimately this choice makes the mode feel almost tacked on compared to everything else. It’s here because it was a part of the games that are being recreated, as oppossed to being retooled or touched up. Speaking personally, I much prefer the more arcadey Challenge Mode.

The biggest change on a fundamental level is the absence of lives and continues. The stakes are effectively gone, with infinite chances being a blessing that allow you to keep trying in the face of frequent Fall Outs. The only real “pressure” here is the game’s focus on your clear times, and while I’m proud to say I got through these gauntlets I’m embarrassed by how long some of them took.

In summation, when it comes to this half of Super Monkey Ball I love it about as much as AiAi loves bananas. It’s the kind of gameplay that’s so easy to understand (get monkee to goal) and yet never gets boring despite its simplicity. Again, I give the bulk of that credit to the sublime and frequently mind melting stage designs. Monkey Ball as a whole absolutely holds up, and with two remakes now I’m eager to see what Sega does next with the series. 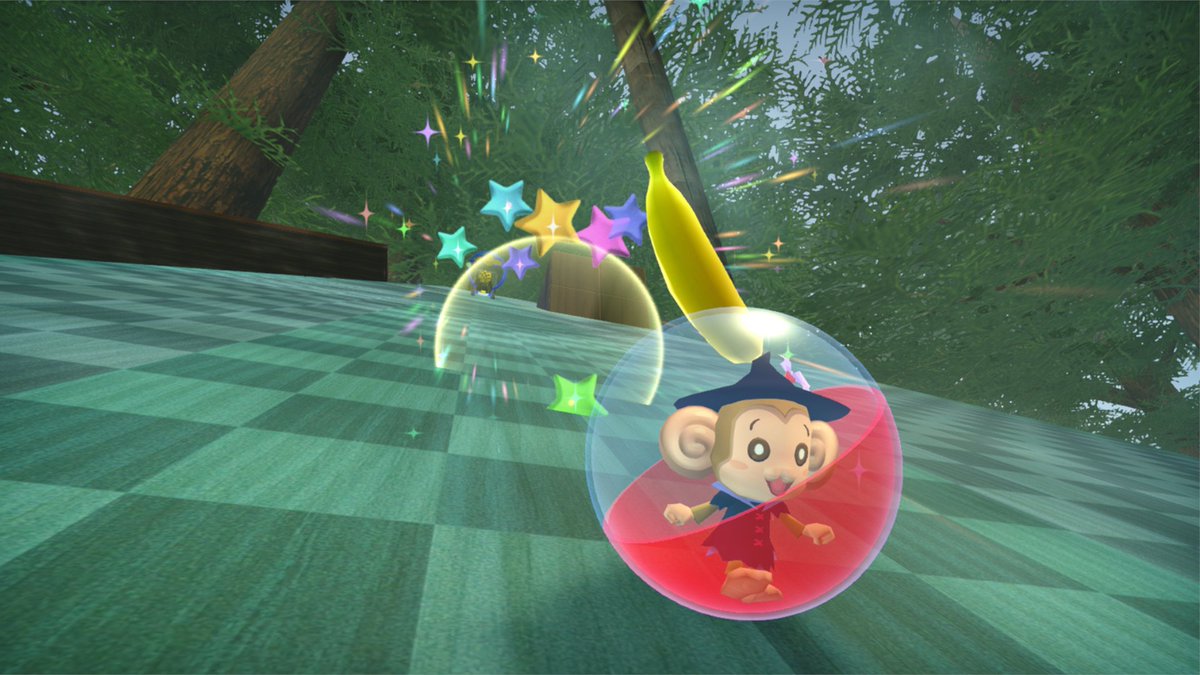 Where things were a little less ripe were with the Party Games and the unlockable cosmetics. The same dozen games that graced SMB2 are back, and while there’s fun to be had with them they just don’t feel as polished as the core, physics-based experience to me. Fine control and feedback are what I come to Monkey Ball for more than anything, making these an odd tactile shift from the oh-so-satisfying Main Game.

Still, the likes of Monkey Target and Monkey Golf still deliver as distractions and multiplayer options, and I’d be lying if I didn’t get a gross satisfaction out of boppin’ my fellow apes off stage in Monkey Fight. Most aren’t as enjoyable or replayable, and other than entertaining guests or revisiting old favorites (Monkey Bowling, baby!) I didn’t linger in these offerings all too often. 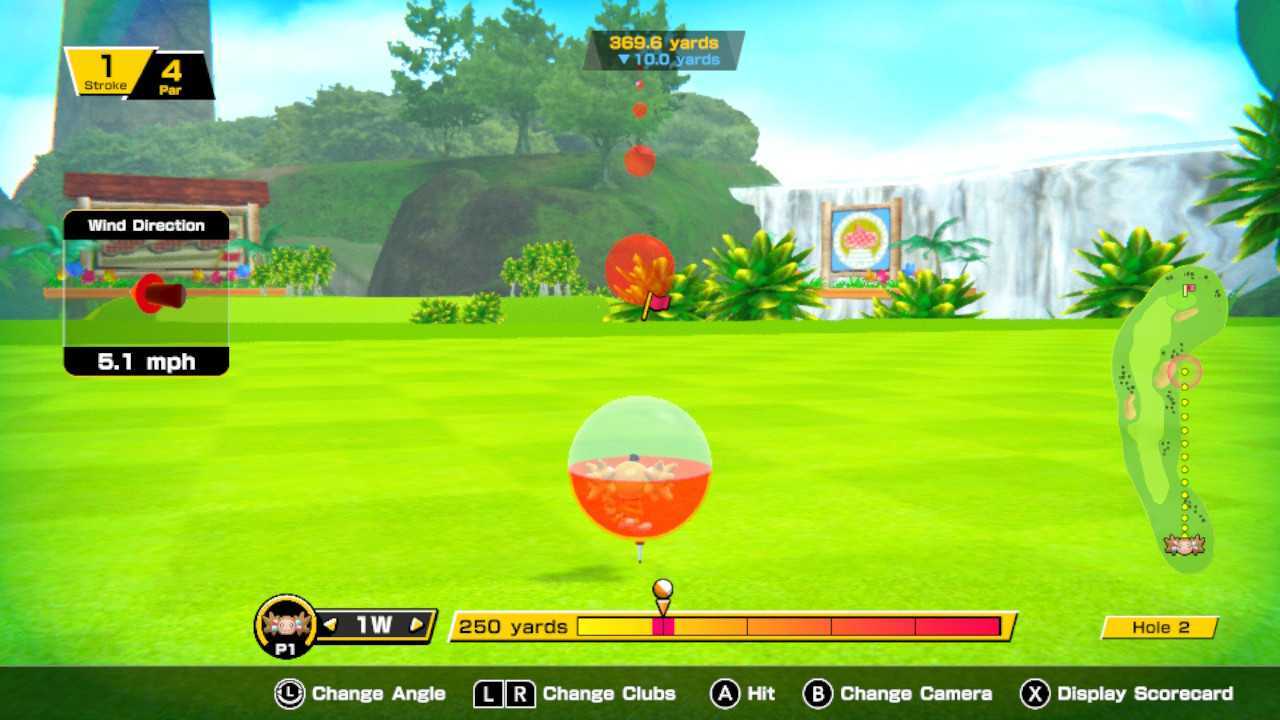 Anyone who does will find a surprising amount to explore, like the multiple tracks for Monkey Race and varying rulesets for Monkey Billiards. The spirit of these minigames are as much a part of the experience as its more intricate other half, with a shared emphasis on simplicity at their core. The faults I found are all the types of things you tend to forget about when you’re passing controllers and having a laugh with friends, so take that for what you will while I get back to trying to clear Expert difficulty and beyond.

Getting around and trying out all Banana Mania has will grant you coins to spend in an in-game shop, giving you access to costumes as well as unlockable characters – some from outside Super Monkey Ball entirely. 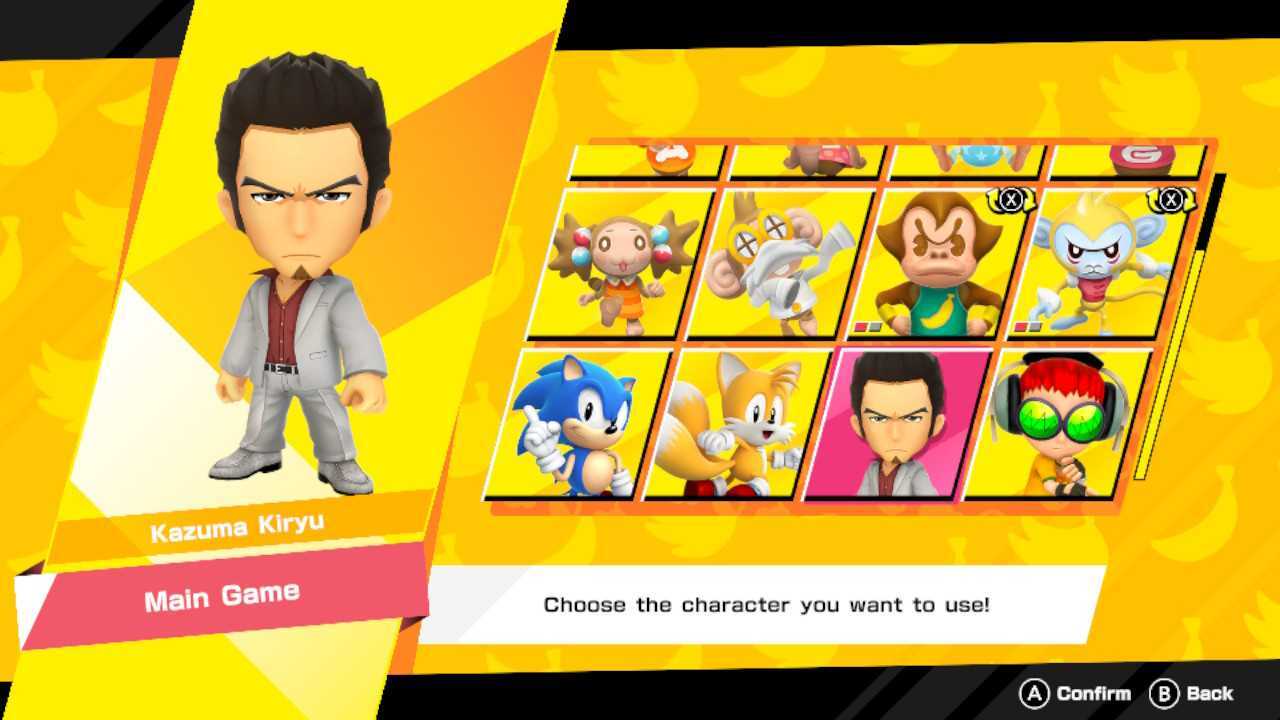 There’s no shortage of joy having Yakuza’s Kiryu inside a gachapon ball or seeing Jet Set Radio get some attention, but these characters are locked to the Main Game which feels a little half baked. No Monkey Dogfights for Sonic and Tails despite their experience with planes, and the lot of them also go unvoiced and without the same amount of animations as the core cast. Understandable – they are guests after all – but still a bit of a letdown. Doesn’t mean I wouldn’t take more Sega cameos though…

The advertised costumes, where you can dress up the gang with hats and shirts and different balls, are suitably cute but all feel a little limited. Different colorways of the same style aren’t as exciting as added variety, and it definitely feels like a wasted opportunity to bring in even more Sega shoutouts. Still, it let me put GonGon in roller skates and for that I’ll always be grateful. 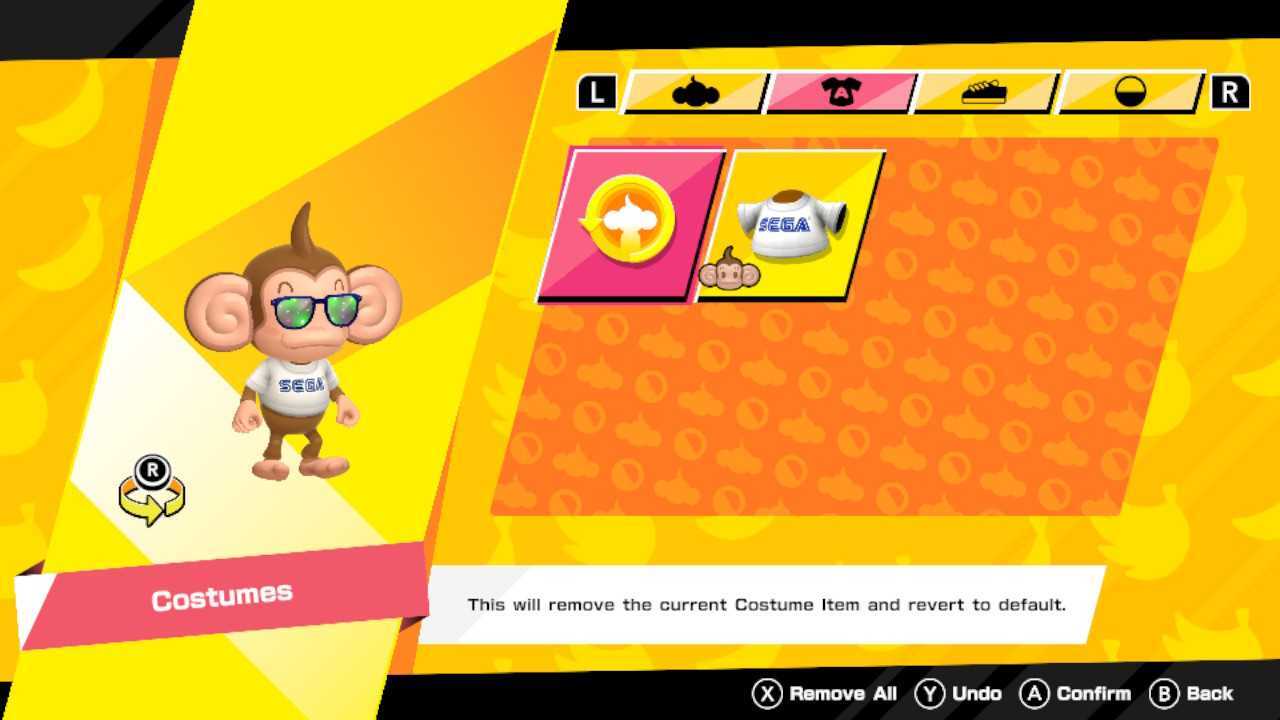 As far as other unlockables, the assortment of Extra Modes offer unique twists to the Main Game, like making bananas dangerous obstacles or having to play through a course in reverse. The highlight here was the inclusion of Super Monkey Ball Deluxe’s own unique stages, which range from simple yet eye catching to oh my god how is anyone supposed to pull this off. It comes as no surprise at this point that if the game dares me to roll through more courses, I’m going to do just that. 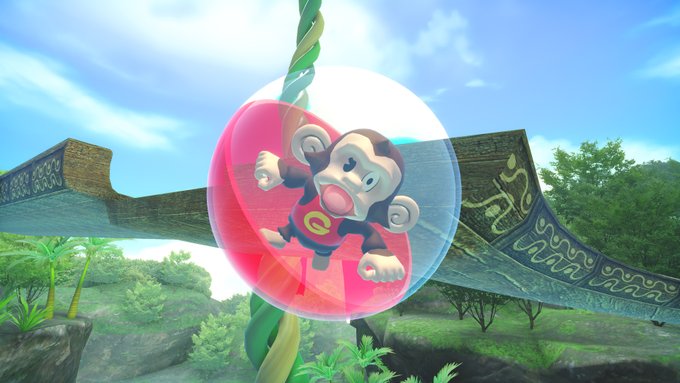 Ultimately there isn’t much to be said about Banana Mania that isn’t already known about the series already. In reviving the best entries and elements and putting them on modern consoles, Sega has given AiAi the best 20th birthday present a monkey could ask for. Not every piece is perfect and the less than linear difficulty can drive you up a wall sometimes, but playing through this one was both nostalgic and illuminating.

I caught myself remembering old strategies the second I laid eyes on a particular floor, and managed to clear courses young me could never manage. If you grew up with these games this is a no-brainer of a pick-up, but anyone who missed the first go around with Super Monkey Ball have no excuse not to go for the new best of the bunch. 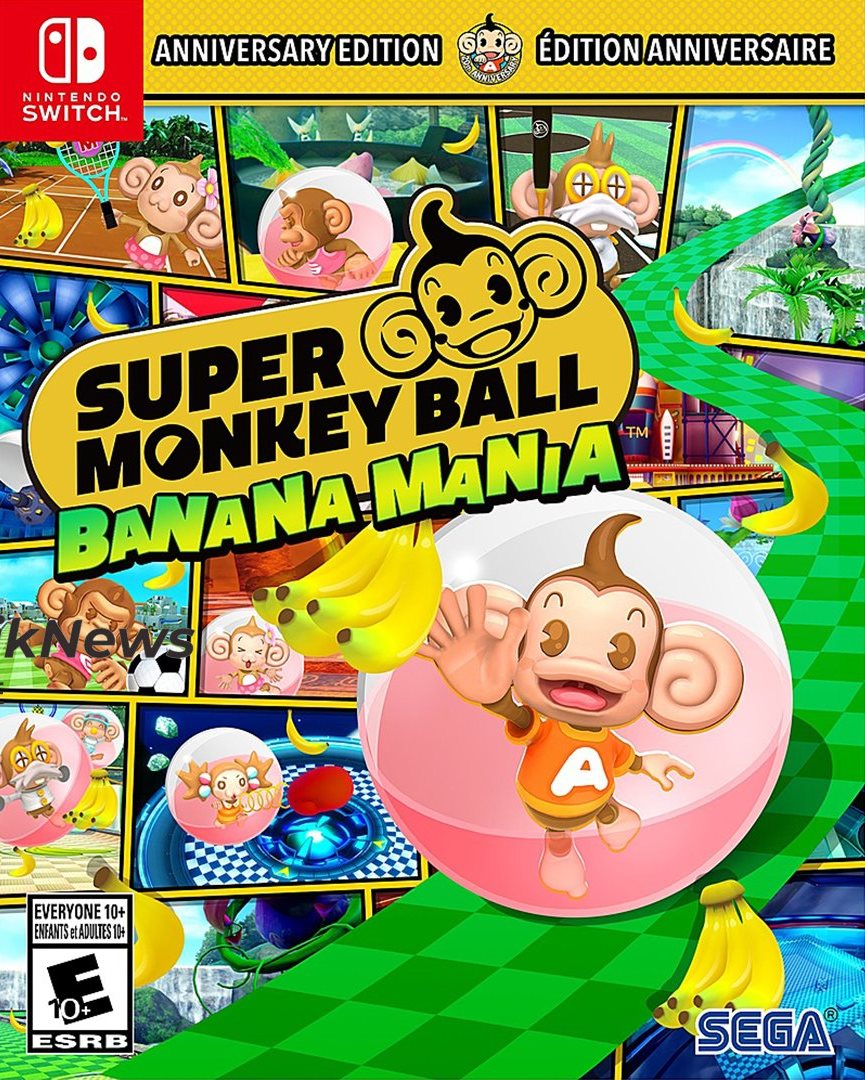