When it comes to multiplayer there are few games that can boast as lasting and consistent a legacy as Bomberman. The overall game design hasn’t changed much in the last 33 years and with good reason: it still works incredibly well. There’s an inherent madness that comes along with a round of Bomberman surrounded by friends. These times usually lead to house rules, legendary rivalries, and a constant struggle to see if yells or laughter take over the night.

It’s one of my favorites, and while the Super Nintendo entries in the series have usually been my go-tos, there’s been some added polish over time, like cosmetic unlocks and map variety, that make newer entries worth a look when they come around. That takes us to Super Bomberman R, the first non-mobile Bomberman game in a while. While the game’s story mode and shop system have their flaws, the core gameplay is alive and well. Most impressive is how this multiplayer mainstay makes full use of the Switch’s unique features and design to become the go-to platform to light the fuse of any party.

For anyone unfamiliar, Bomberman is all about precision, awareness, and quick thinking. Maps consist of grid-like set ups of two types of blocks: breakable and unbreakable. Your only constant ability is to place a bomb that will explode after a short period of time, spreading fire into the adjacent squares as well as where the bomb itself was planted. The unbreakable blocks and map edges stop fire, creating corners and hallways to avoid blasts in. You use these bombs to clear out the breakable blocks, which not only opens up more space to you but can sometimes grant power-ups. These range from giving you the ability to plant multiple bombs, extending the reach of a bomb’s fire, or changing the way you can interact with bombs. Gathering these is key no matter what mode you’re playing, but even the most kitted out Bomberman can lose if they don’t mind where they’re going with up to seven other bombers doing the exact same thing.

That’s where the game really comes alive. With most of the breakable blocks gone and multiple players powered up, it becomes a never ending string of explosions coming from every angle. You have to be able to determine which squares are safe and what terrain you can use to blast your opponents away and come out on top, creating hectic, heated competition all the way ’til the end. Goals and flow are a little different within the story mode, but the core design and mechanics are still present all across the game. Anyone expecting variety or something new may be disappointed, but that doesn’t mean the game isn’t worth checking out.

I started my time with the game in its story mode and was greeted by colorful art and straightforward lines and ideas from the characters. The cartoon-like presentation wasn’t a problem for me, with the eight Bomberman characters being entertaining in their one-trait characterizations. The voice direction can be a little off at times, but the over-the-top tone keeps it from dragging things down. Cutscenes between game worlds and framing boss fights are worth a couple laughs, but they’re not about to make you think at length about what’s “happening.” The stages themselves feature objectives, such as defeating all enemies or making your way to a number of switches that, when pressed, will open the gate to the next stage. Level layouts and enemy AI become more complex over time, upping the challenge and variety as you progress.

The biggest problem I had was with how the game handled its continues. Depending what difficulty level you choose, you’ll have a set number of lives within which you must clear the current world. Run out and you end up sent all the way back to the first stage of the world without any of your gathered power-ups, unless you buy a continue with the game’s currency. This isn’t anything too far-fetched and would be tolerable if said currency was more easily accrued. When a world is completed you gain some based on your remaining lives, power-ups acquired, and other factors– but it doesn’t feel like an amount proportionate to the task itself unless you’re playing on higher difficulties. This dissonance is unfortunate because I did enjoy the story mode itself, but not enough to try and make my way through it on a harder mode. It just makes saving currency tricky unless you were willing to start over and over again when you run out of lives.

If this currency were only for story mode continues that’d be one thing, but sadly it’s also tied to unlocking things from the game’s shop. Extra maps are gated behind currency, and with the slow rate of acquisition it creates a sense of needing to grind for all the game has to offer. Having a great variety of boards makes a game like this more enjoyable in the long run, so it’s really unfortunate that it has to feel like a chore to unlock them rather than have them offered as a legitimate reward or goal. They’re there, but you have to be invested and dedicated to get them for yourself. The same goes for the game’s cosmetic items, though the disappointment of not being able to wear a silly hat doesn’t compare to a lack of map variety.

These problems may mar the experience, but there’s a lot to like about Super Bomberman R, too. While the standard story stages could occasionally get repetitive, boss battles present differing challenges and situations, enhanced by the characters’ over the top portrayals in the cutscenes. They were a highlight, and part of what pushed me onward in the game was wanting to see what the next boss encounter would bring to the table. As I’ve said before: the Bomberman formula is here and works across the board, though it’s outside of story mode that it really gets to shine.

Local multiplayer is where a Bomberman game is at its best, and thanks to the Switch, Super Bomberman R has a lot going for it. Thankfully, Joy-Cons come in pairs by default and the console is portable, making it incredibly easy to play with friends if you have your Switch with you while you’re out. Story mode has full co-op support to make the experience more enjoyable, and it means matches can happen anywhere. My only complaint while playing undocked is that it can be tough to see the action while playing some of the busier stages. And with a game built around precision, the craziness gets amplified. The game also supports connecting multiple Switches together, though the main event is docked play with eight people gathered around.

As for online, that’s a bit more mixed. On the one hand, it’s another source of the game’s currency and there’s an inherent satisfaction in pulling off a win regardless of how many people are around. But that’s just it. Even if I were playing with friends online, it loses some of the luster without the ability to laugh and play together with a game like this. That’s not something I can fault the game itself for, as it’s just a part of online multiplayer in general, but there’s a noticeable difference in joy between local and online play. It’s a mode I wouldn’t want to see dropped by any means, but just be aware of the tonal shift.

Putting friendship to the test

As light a package as the game is, I’m still enjoying it. It’s by no means the definitive Bomberman game, but it does have an edge on others. Thanks to the Switch itself, Super Bomberman R is a great example of a game that can go along with you anywhere. Passing a Joy-Con and sharing the game’s trademark multiplayer with others is easy as can be, though the real party starts when you can get eight players together around a TV and see who blows away the competition. While online mode can feel hollow and the currency system is tedious, it’s undeniable that Bomberman still “works.”

If you like to host gaming gatherings or know a few other people who picked up a Switch, definitely consider this one as a go-to game night choice. Anyone else may want to hold off at least for now, but if you get a chance to try it with others you owe it to yourself– and them– to put your friendship to the test. 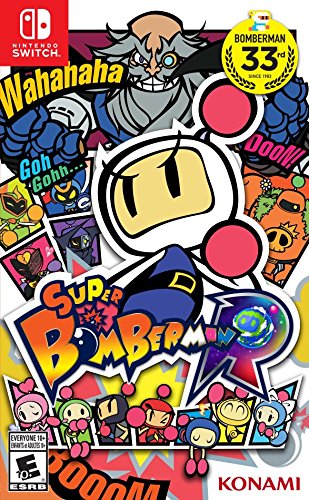