Let me get this out of the way first and foremost: I never played the original Subnautica. As an unashamed lover of fish and all things tropical, that’s an absolute crime against myself, yet having not played it before turned out to be a blessing in disguise. I went into Subnautica: Below Zero not knowing what to expect and was genuinely wowed by what I found in Unknown Worlds’ subaquatic survival sim on Switch.

This new entry in the series trades the tropical environments for one that’s a bit colder, and adds in a fully voiced-acted story which puts players in the role of Robin Ayou, a scientist on a mission to uncover what has become of her missing sister Sam on the mysterious Planet 4546B. In her path to answers stands a frigid and unforgiving subaquatic wilderness full of exotic creatures to encounter, rare minerals to mine, and more than a few mysteries to uncover.

When you first load into Below Zero, you’re greeted by a flock of adorable penguin-like creatures called pengwings frolicking on an iceberg before jumping into the icy waters. Once you actually begin a playthrough, however, the shot of serene nature is replaced by a giant spaceship as it’s buffeted by flaming meteors above a frozen world, and an aggressive synth soundtrack that’s almost vaporwave-esque in its sound. This drastic thematic shift immediately sets the tone for the rest of the game, which is at one moment peaceful and relaxing, and the next is unsettling and often downright terrifying. 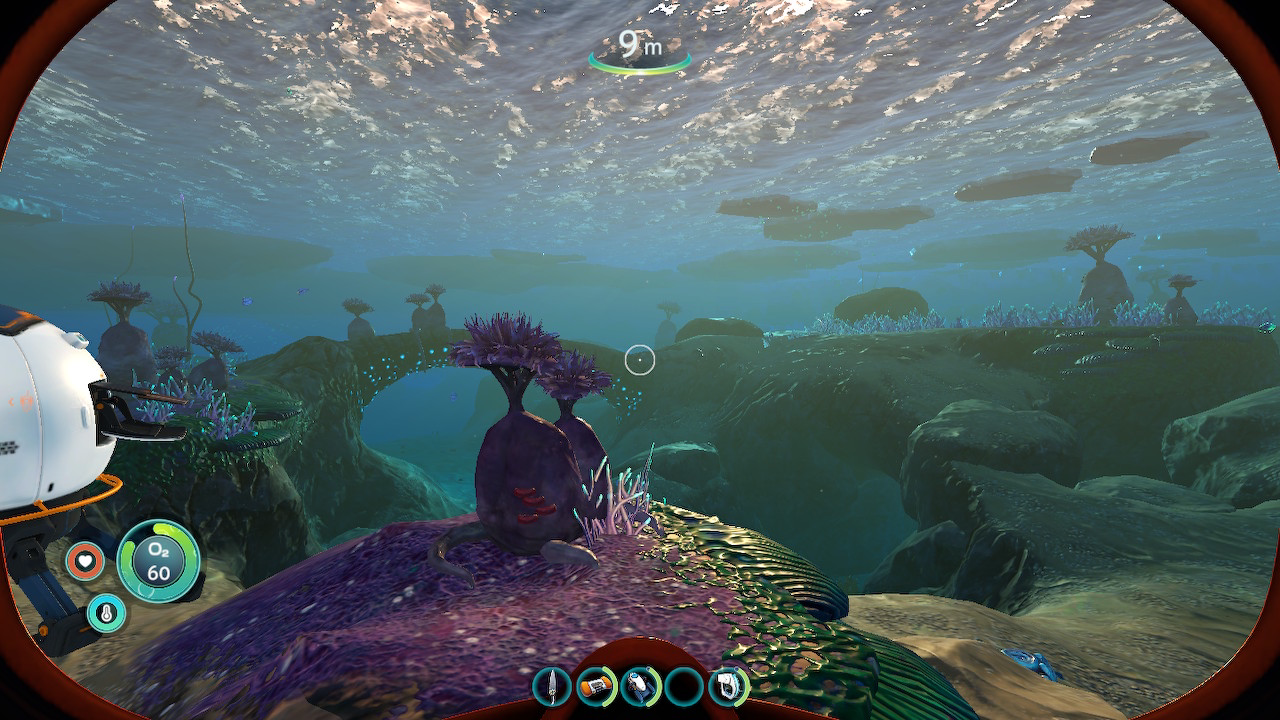 While many games in the survival genre try for this sort of “calm-scary-calm” loop, it can often come off as feeling cheap and even manufactured. Where Below Zero excels at this loop above its peers is in its balance of the different tones, which primarily comes down to the fact that the intensity of the game is almost entirely in the players’ control.

If you decide to take it slow, build up your resources, and essentially turtle your way to strengthening your base and equipment, you’re in for a pretty peaceful time where your only real threats are your own basic human needs of food, water, and oxygen. Well, that and the occasional assault by a sea monkey who has eyes for your shiny Mineral Detector… Stupid sea monkeys…

Where the intensity really starts to ramp up is when you get that little voice in the back of your head that sees resources that are just a bit too deep and says: “I’m sure I can reach that and return to the surface in time.” Or when that same voice hears the eerie sounds beneath the depths and eggs you on to swim that tiny bit further from the safety of the reef to see just what sort of beast is making it.

Such excursions usually conclude with frantic swims to the surface as your survival suit hollers “oxygen” one final time in a tone that’s both calm and condescending; or by desperately fleeing from aggressive sea creatures with a level of panic that few games outside of the horror genre can replicate.

From a visual perspective, the art direction is absolutely gorgeous, with vibrant reefs and sea life just beneath the waves being contrasted by the frozen outposts spread across the surface and mysterious deep sea caves that are all equally beautiful in their own ways. More than once I found myself gazing at the sunset from beneath the water as the last bits of daylight danced along the reefs that surrounded my home base, or staring longingly at the bioluminescent undersea plant life that beckoned me to swim deeper than my survival suit could handle. 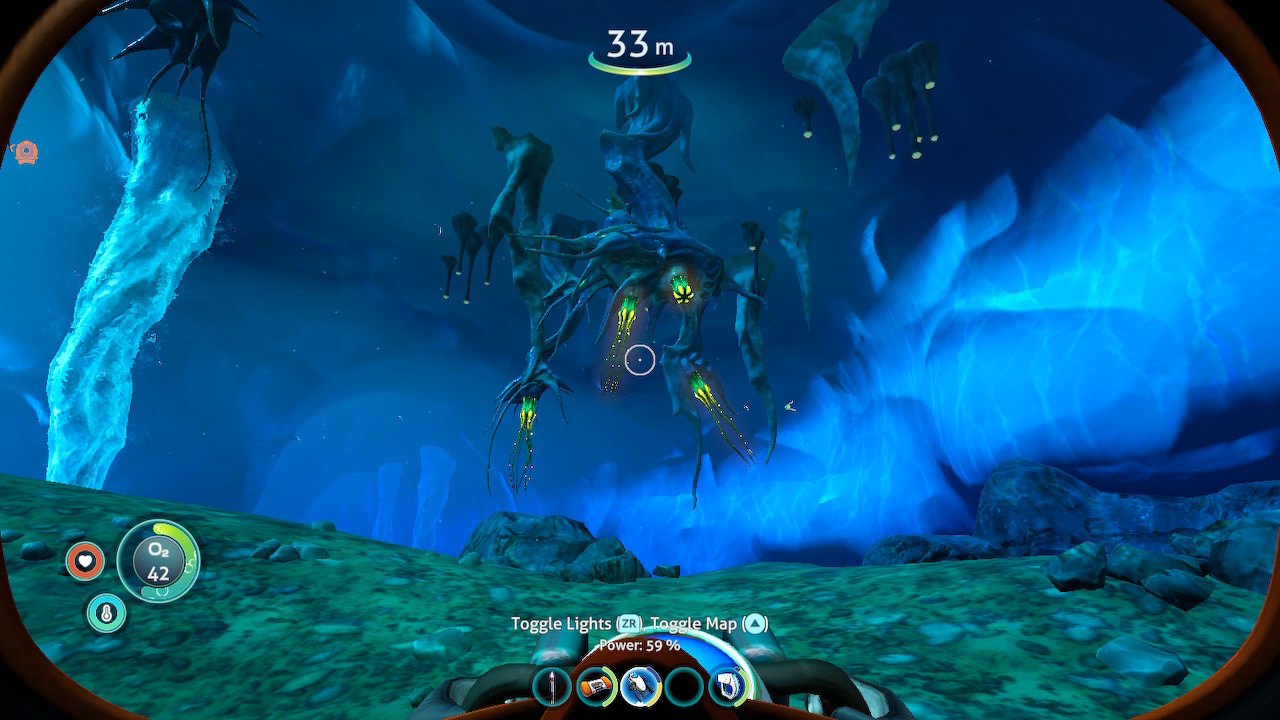 As for the performance standpoint, I have to commend the dev team on a job very well done. While it’s obviously not going to run as smoothly or have as crisp of a resolution as other platforms, the performance optimization for the Switch version has been expertly handled. Below Zero is one of the most graphically impressive games I’ve played on Switch from a third-party perspective, with the framerate only slowing down when the game’s weather effects ramp up to extreme conditions. Even in the times where the frame rate dips, which it will, it’s hard to fault the game as chunks of hail breach the water’s surface and descend as glassy baubles before melting away moments after they’ve appeared.

While the frame rate is surprisingly smooth overall and the frame drops that occur just beneath the surface during extreme weather conditions are low impact, there is one section of the game that could use a bit more attention, and that’s when exploring outdoor environments on the surface. While things are smooth during clear weather, even a light flurry while walking the surface can make the game’s framerate dip considerably, which is a shame considering some major story beats occur while on the surface.

The core gameplay of Subnautica Below Zero revolves around the Scanner, an indispensable tool that serves to help you uncover new blueprints to craft, learn about the native flora and fauna, as well as uncover more of the overarching plots. And yes, there are multiple plot lines to follow. Planet 4546B is a big place with a lot going on beneath the surface, with Robin’s search for her sister playing a small part in a much larger narrative.

While the story has a lot to uncover and is genuinely interesting, the survival gameplay and underwater exploration on offer are so captivating that I almost forgot the reason I was there in the first place after a few hours of play. Now, that’s not a knock on the story — which is packed full of interesting tales that are brought to life with fantastic voice acting — rather, it’s a testament to just how polished and well executed the core gameplay is. 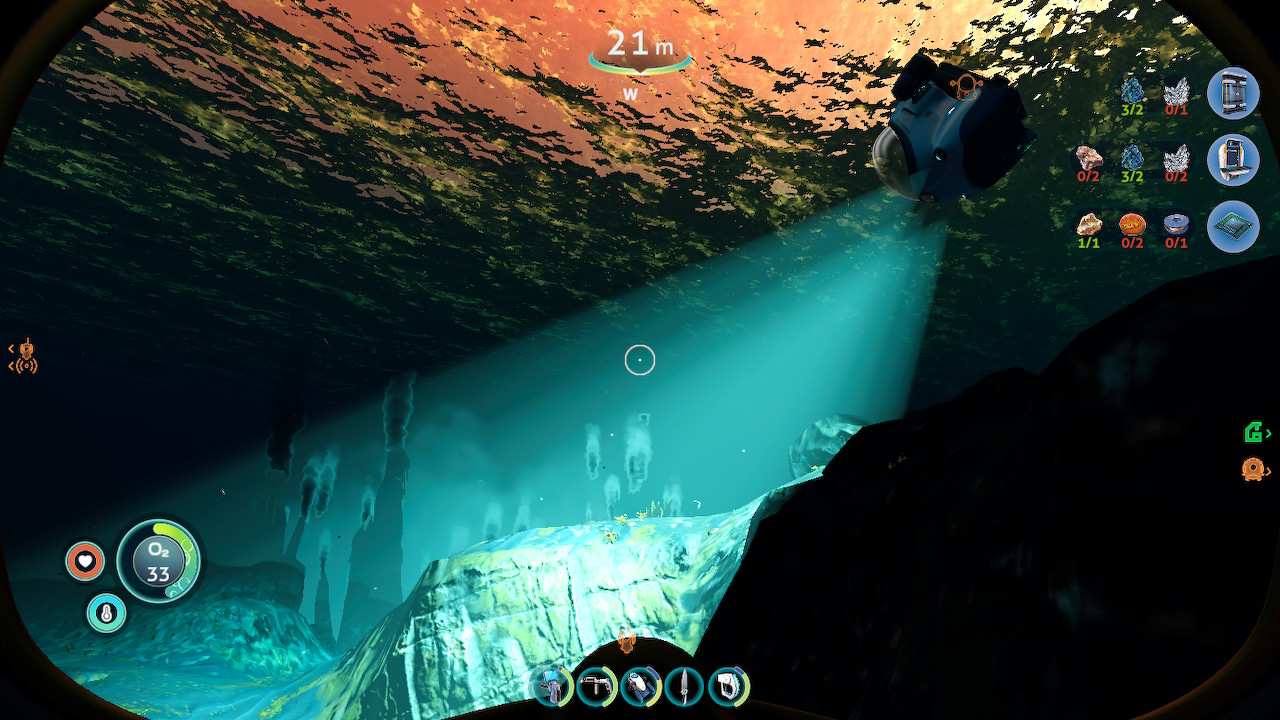 Plunging to the depths of this watery world and uncovering new resources and blueprints feeds so smoothly into the crafting, habitat building, and story progression that I never felt like I was wasting my time on random excursions. The habitat building in particular caught me off guard with its level of customization and depth. What I assumed would just be simple base building turned out to be so much more, with oxygen levels, power consumption, and hull integrity all coming into account.

Just like the balancing of the game’s atmosphere, the team at Unknown Worlds have balanced the crafting with the story to such a degree that you really can’t have one without the other. Players who try to gun through the story without focusing on the survival elements in step with the game’s plot will be in for a frustrating experience as they find themselves short of what they need to progress the plot. On the flipside, players who only focus on survival will find themselves hitting points where there’s no more room for them to grow without touching the main storyline.

This interconnected experience is aided by controls that are responsive and well laid out, especially while swimming, which was a major concern of mine as a newcomer to the series. Thankfully, I rarely felt out of control while exploring the watery depths of Planet 4546B, and when I did, it was because the game wanted me to feel that way. I do wish the game supported gyro aiming, however, since collecting smaller objects and critters while in handheld mode can feel downright clunky at times thanks to the Joy-Con’s shorter control sticks. Overall though, the controls are great, and the lack of gyro support doesn’t hinder the experience outside of brief inconveniences.

I never fully felt the hype of the Subnautica series before Below Zero. The tropical aesthetic was right up my alley, the gameplay seemed fun, and the base building looked interesting, but I dismissed it as just another survival game. Having played Below Zero and really sunk my teeth into what this series has to offer, I fully understand why it has become so popular.

This isn’t simply another survival game with tacked on base building, as I erroneously pegged it. It’s a deep, fleshed out world to explore with fully realized survival mechanics that could easily be classified as a hobby game in the sense that Minecraft or Terraria are, just without a procedurally generated world. Complementing the robust survival gameplay is a fully-voiced story, with multiple subplots, that plays out in interesting ways and provides a nice carrot on a stick beyond the “get stronger and build bigger” foundation of the genre. 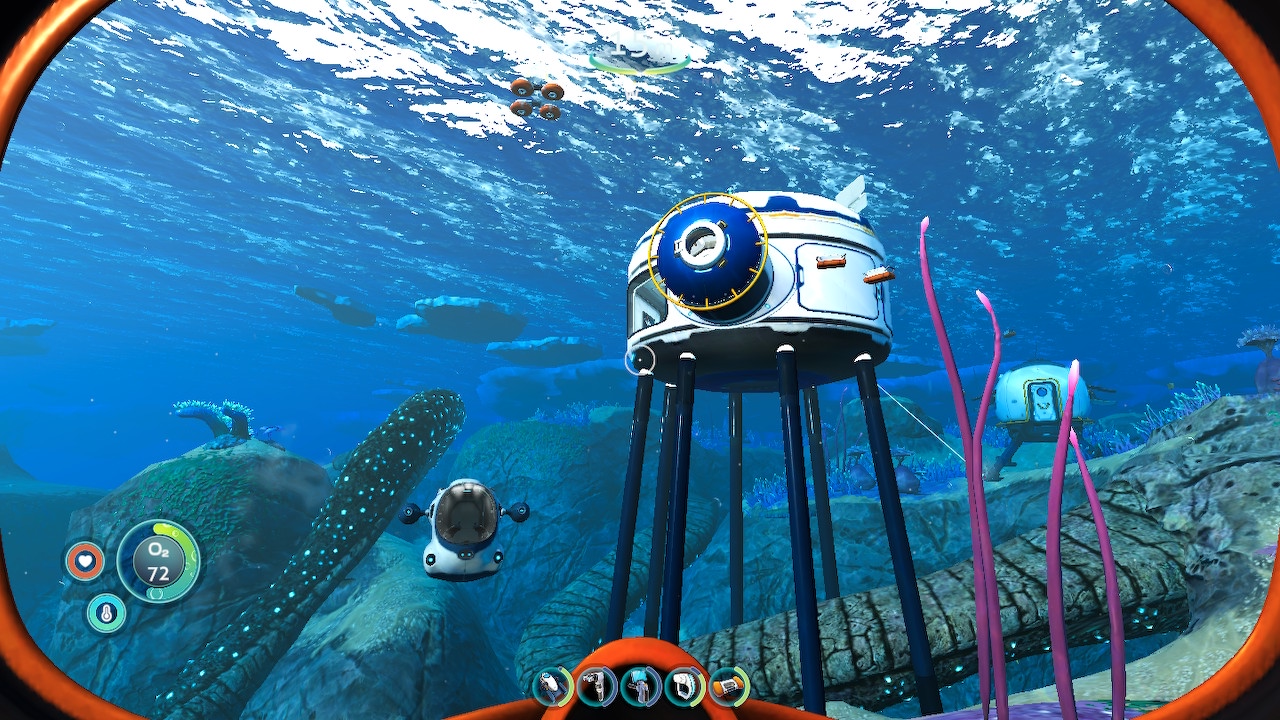 Subnautica: Below Zero’s adventure is equal parts survival sim and sci-fi thriller, and should you decide to take the plunge into its icy depths, you’re sure to find one of the most robust and satisfying survival titles on the eShop. 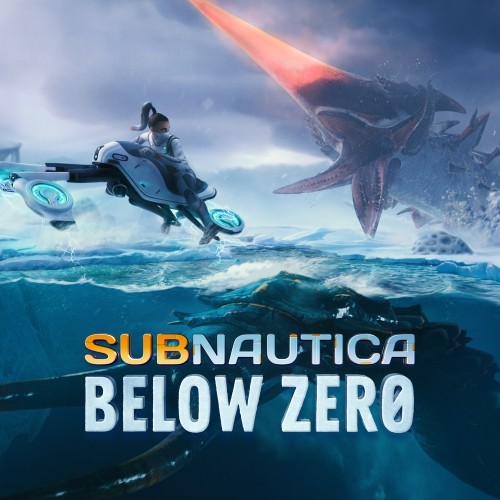