Fans of the long-time Bokujō Monogatari farming-sim series already know how each new entry begins. You, the player, find yourself in possession of a dilapidated farm that needs more than just some TLC and have a town to explore full of new neighbors and new possibilities. Sure, there are some variants to this formula over the 25 years Bokujō Monogatari has been around, yet this typical start is used as the foundation for Story of Seasons: Pioneers of Olive Town.

Pioneers of Olive Town is somewhat of a rebuild of the farming-sim series – the basics have been retooled, a brand new town and a new cast of characters are established, customization and crafting are brought back and expanded upon, the dating-sim aspect that everyone is romanceable regardless of your character’s gender continues to be the standard, mystical elements concerning spirits and harvest deities are waiting in the wings, and all the animals are as cute as ever (including the beloved “bubble cow” design). For long-time players and fans, this hits just about every item for the series’ checklist of tropes and conventions. Yet, that doesn’t mean they are without faults.

The pioneer theme is there from the start, with Spring 1 greeting you with an overgrown forest instead of a sprawling farm. There’s no home on the property, yet, and you’ll be roughing it up via a tent and camping cot. After meeting with the Mayor of Olive Town and his mini-tutorial farming lessons throughout the first in-game week, the wilderness and Olive Town are yours to explore. Hacking away at trees, rocks, and weeds turns into resources you can use to make crafting materials and experience in leveling up your skills (ten in all). With enough land cleared, you can start plotting out fields where you can grow crops and possibly find a rundown building that needs to be repaired. Before you know it, you’re unlocking more farmland, exploring mines filled with ore, growing mushrooms, caring for a bee colony, building a proper log cabin home, have functioning Chicken Coops and barns, and more. 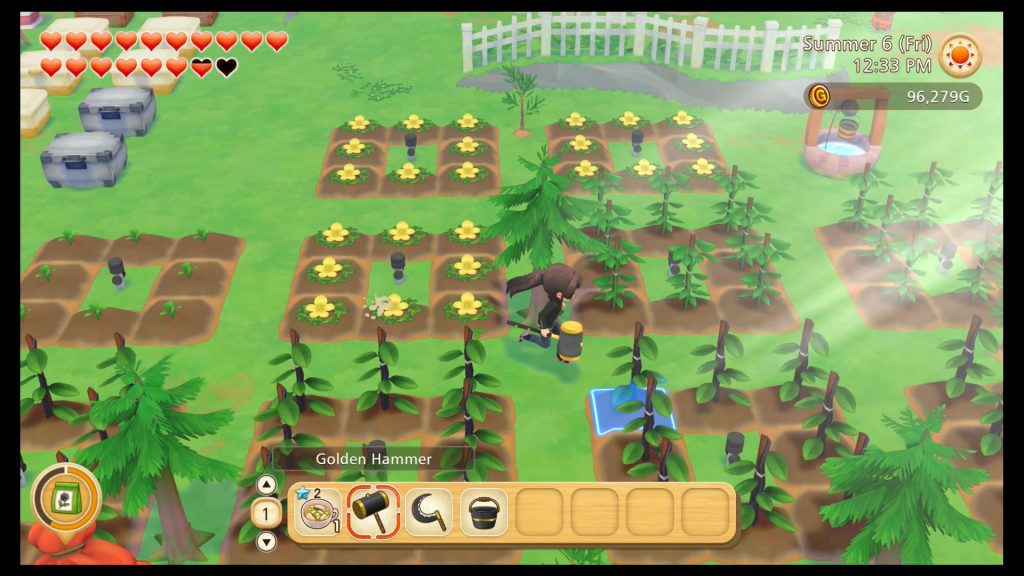 That’s also the downside to your farm. There’s no huge overworld to traverse – no forests filled with resources between your farm and the town. It’s all combined on your property. Laying down customization items (roads, fences, decorations, etc.) will cover up spawn points for trees, rocks, weeds, flowers, and other wild plants. Eventually, you can unlock areas that are plentiful in some of these resources or even grow them yourself, but to reach that point you have to sink in plenty of time and stamina (less if you’re playing on the game’s Seedling “easy” Mode).

Plus, your farm will be consumed by maker machines at one point or another. The machines making the cut isn’t a big surprise, as they’ve been prevalent in the last few Story of Seasons games, but it’s how they’re handled that’s questionable. Previous entries allowed you to dump stacks of resources to be processed, allowing you to run around to partake in other activities. Pioneers of Olive Town drops this efficiency for manually processing each product one-by-one. Need 10 bricks? Get ready to shovel in the required amount of clay for one brick every four hours of in-game time. Eventually, there are maker machines that will make multiple items, but the cost of crafting the machines in the first place isn’t worth it – 100 bricks, 100 buckets of mortar, and 5 orichalcum ingot so I can craft 3 bricks at a time? No thanks. Thankfully, you can earn some of these massive maker models for free which helps and saves the necessary building materials for other projects. 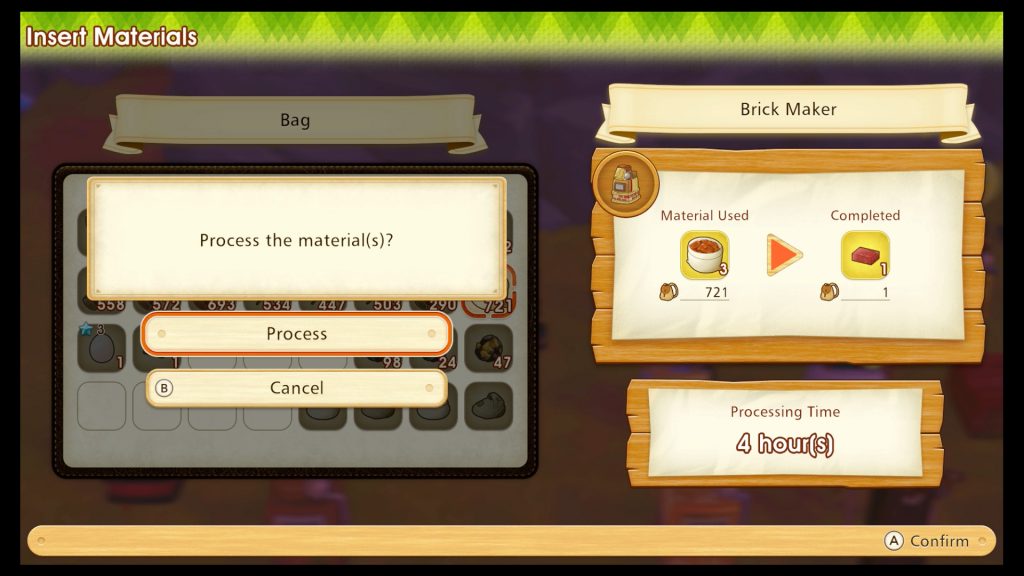 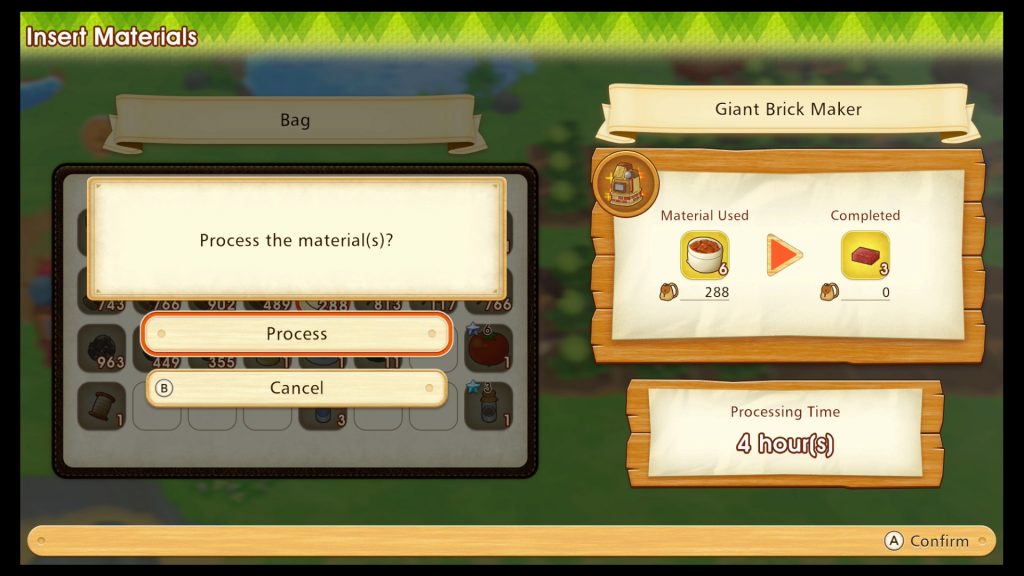 The crop selection and variety of animals are “just right”. Not everything is available from the start, but unlocking crops and their seed forms is simple – shipping at least one unit of the item will summon its in-stock status at the local markets. There is a quality rating system (ranging from 1 – 10 stars) and some crops have variant forms (i.e.: Star Potatoes and Mosaic Corn). For completionists and farmers who desire 10-star fruits and vegetables, that challenge is there… but it’s dashed immediately thanks to a perk at the Earth Sprite Village where 10-star seeds are available for sale at random. In addition to that, throwing crops into the seed maker isn’t convenient – one crop will turn into two units of seeds and the process takes 23 in-game hours. All that time and effort feels pointless when you can skip the leveling up process and turn your 10-star crops into more 10-star seeds. 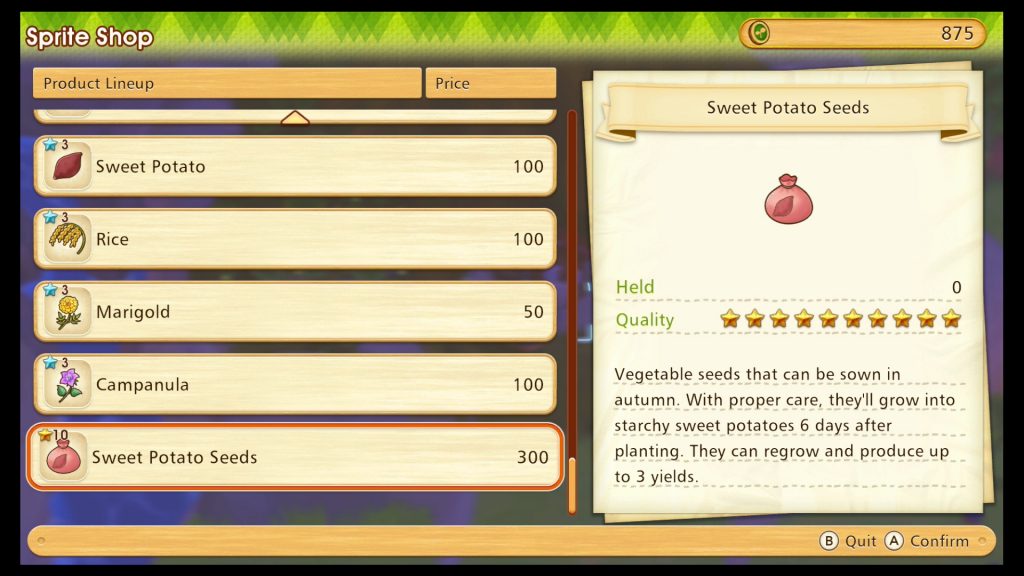 As for the animals you can raise – chickens, cows, sheep, goats, buffalos, alpacas, and rabbits are your livestock options. Each has a variant (i.e.: sheep and Suffolk sheep), and you’ll get one of each for free (save for two variants). Throughout your farming adventure, as you unlock portions of your farm and repair farm buildings, you’ll be able to tame wild chickens, cows, sheep, etc. that roam your property. The same quality rating system (ranging from 1 – 10 stars) applies to the animal by-products you’ll collect, but getting 10-star milk isn’t as easy compared to previous games. Each animal will max out at a certain quality rating, thus the only way to level up the by-product is for them to reproduce so their child will be one star higher. The original livestock that you tame will max out at a 3-star rating for products fairly quickly. For those who want the coveted 10-star milk/egg/wool, get ready to breed livestock for at least seven cycles and then either hang onto all of them or release them to the wild. 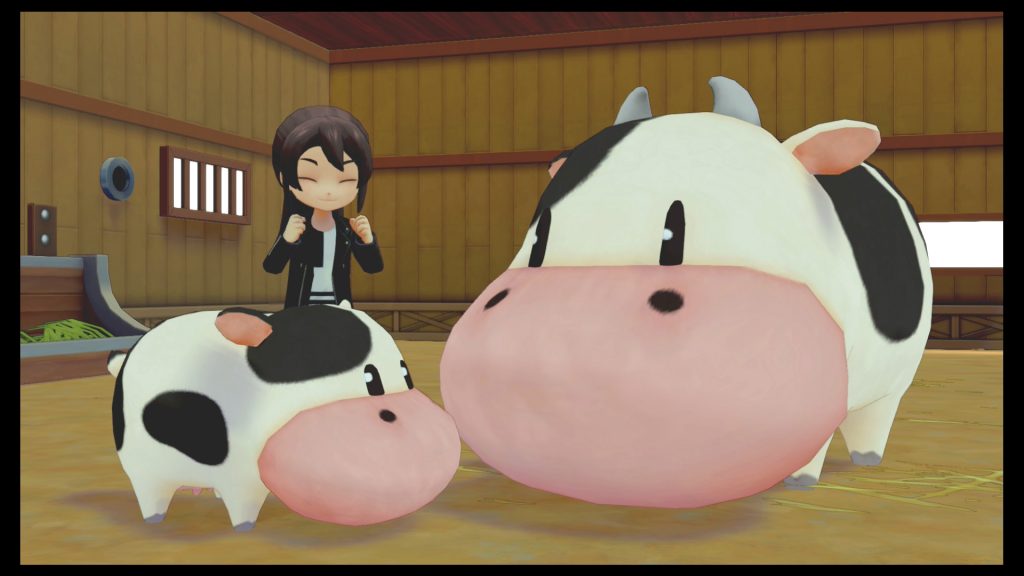 Horses and pets are also available to add to your menagerie. Despite having features – riding your horse throughout your farm and in town as well as playing, feeding treats, and walking your pet – they’re mostly cosmetic. There is a 10-heart affection gauge for pets, but absolutely nothing for horses. In a series that has had games where raising the affection of these animals benefits gameplay and specific festival events, it’s a bit disappointing to see that not make the cut here. 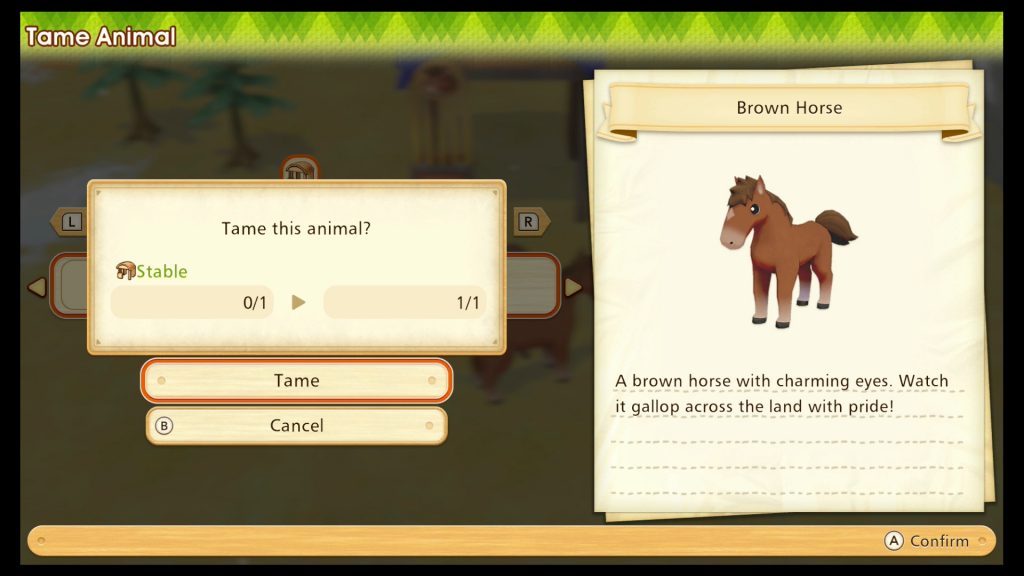 The other main area of the game, Olive Town, is a five-tiered seaside town that is trying to boost its tourism numbers. Mayor Victor has projects that call for materials, thus allowing you to upgrade the town and have more tourist NPCs visit daily. Gloria, head of the town’s museum and Victor’s wife, has a near-empty museum in need of donations giving you an extra incentive to find every type of fish in-game as well as discover the native wildlife with the new Camera tool. Then there’s the handful of residents that worked alongside your grandfather and have fond memories of him and like to talk about their glory days. Throw in a mix of families that call this quaint place home and some new residents wanting a relaxing life and you have a fairly balanced idyllic village. 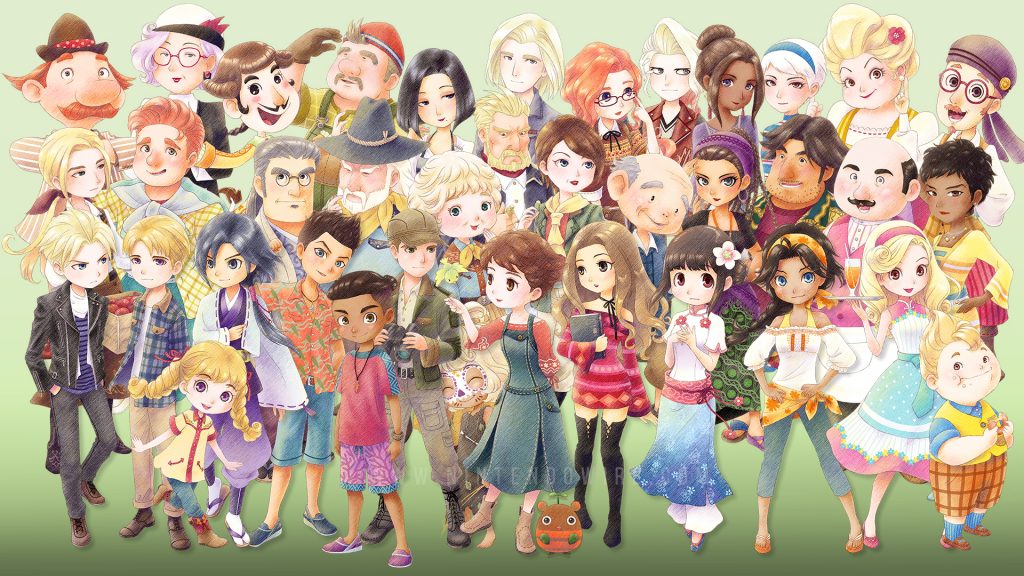 The game’s dating-sim portion starts with ten romanceable options, and the bachelors and bachelorettes are all different and have their own quirks and backstories. Even better is that this is the second Story of Seasons game that allows everyone to be romanced, regardless of your selected gender. So if you’re suddenly charmed by another NPC, you don’t have to start up a new file as a “boy or girl” to pop the question with a blue feather.

Tracking down Olive Town’s residents isn’t hard thanks to the map menu, as you can find everyone’s general location at once. It’s not perfect, as sometimes I found myself missing a character by a few steps and had to recheck the map, but you won’t find yourself guessing where everyone is all the time. 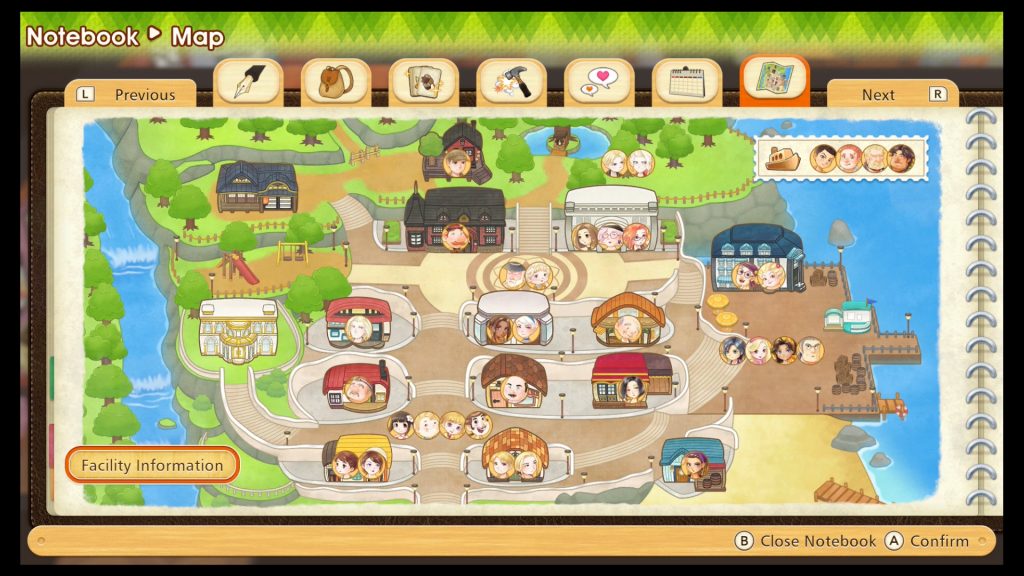 In terms of character dialogue, it tends to be repetitive in the days before, during, and after festivals. Character portraits are also missing, making it more noticeable. The residents of Olive Town have some cute personalities, but they suffer from not having a bigger text pool, and that the 200+ cutscenes in the game are only viewable once. Those interactions are where they all shine, but it’s brief and you don’t see it carried over in their daily dialogue. 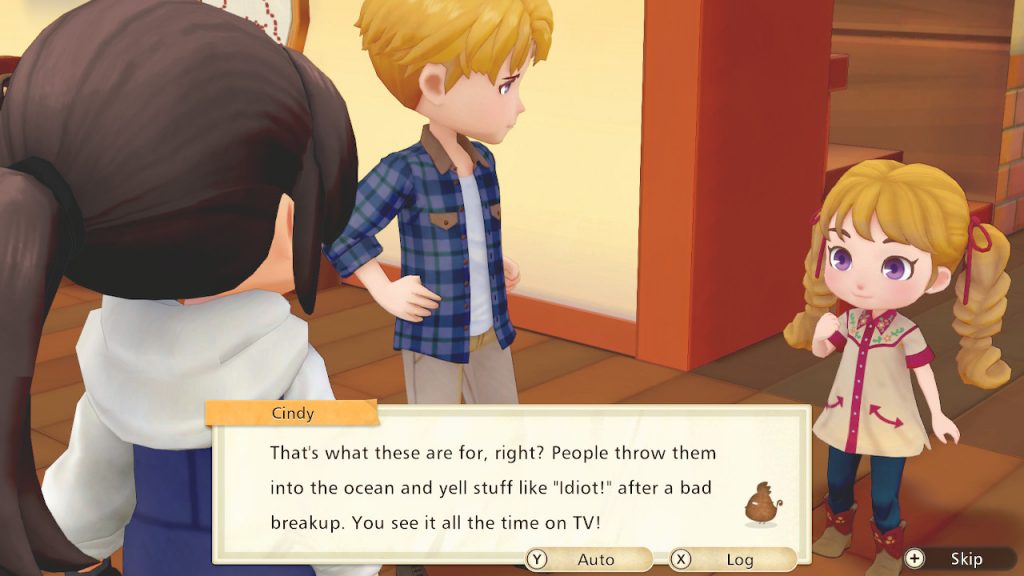 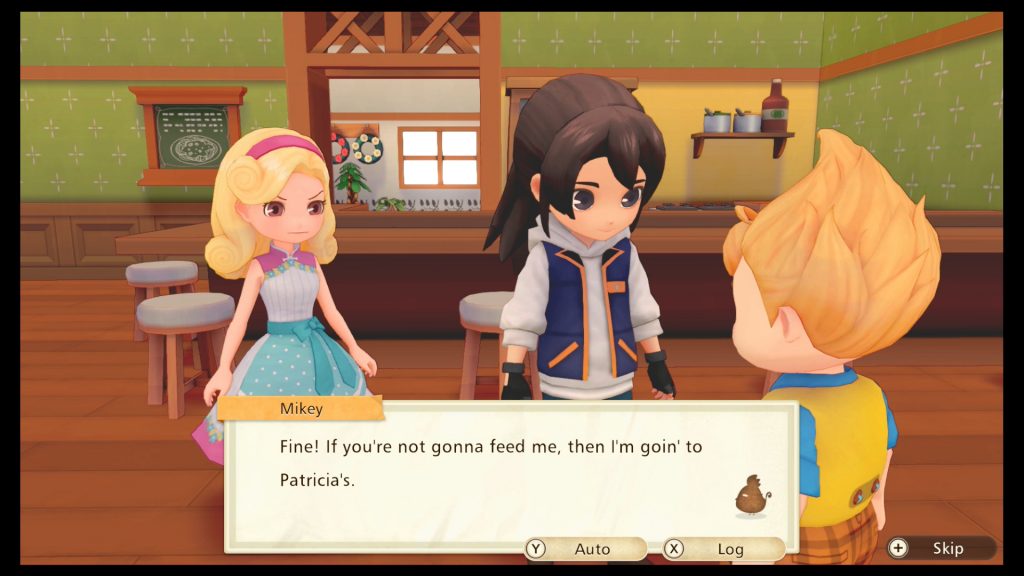 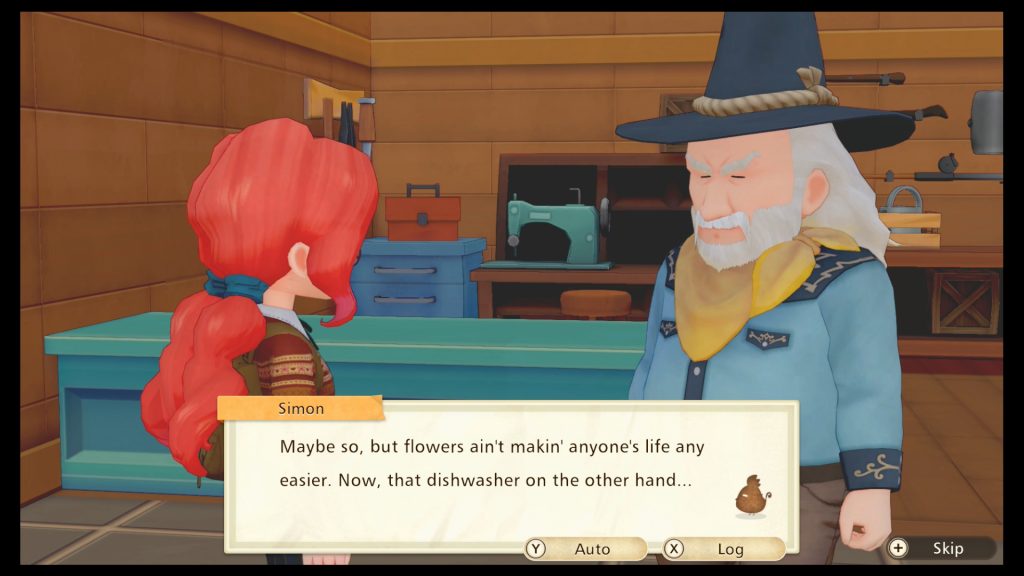 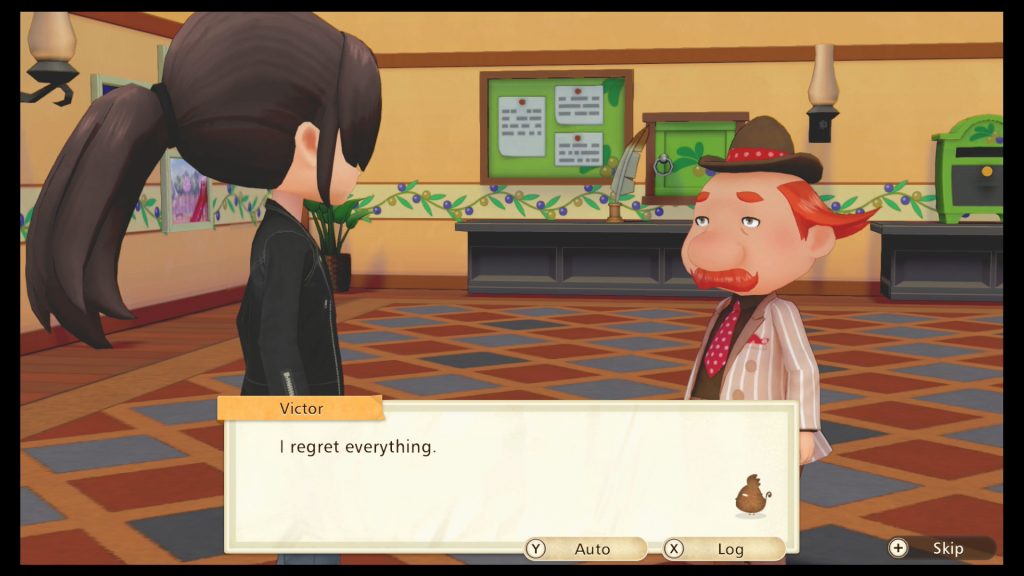 Bokujō Monogatari’s stories can be fairly basic or even span generations – Pioneers of Olive Town’s tale feels like a first draft. There are two main storylines, “upgrading Olive Town” and discovering the game’s mythical Earth Sprites (and their history). Both stories can easily be tied together thanks to the town’s museum, and give Olive Town a bit more standing as a “must visit” tourist stop. Sadly, this isn’t the case despite all the hints you’ll find as you befriend more and more Earth Sprites and unlock their secrets. 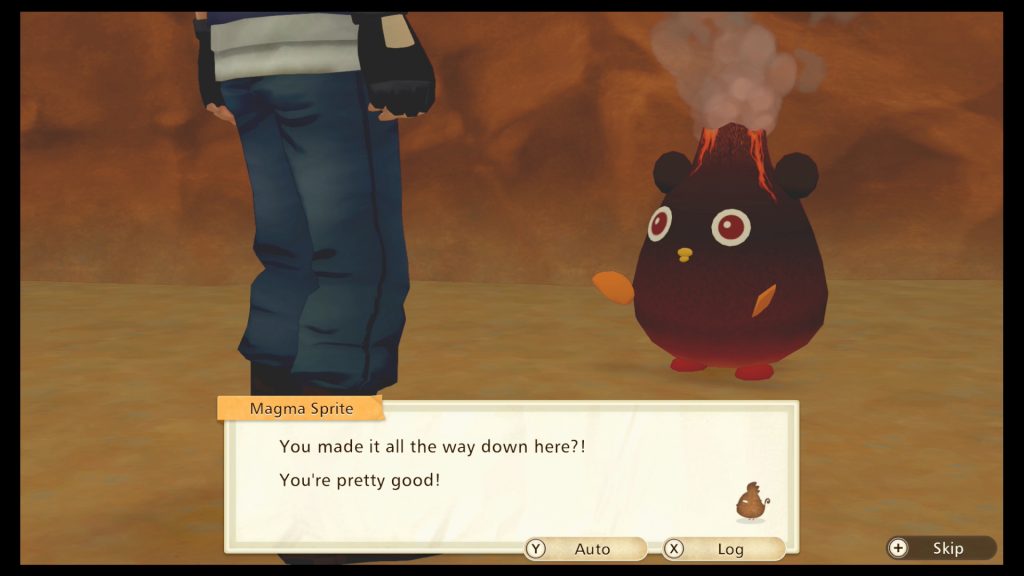 I’m not looking for some grand story, just enough of a plotline to peel back the curtain and reveal some mysteries. Tell us what happened here before your grandfather started farming, why the big push for tourism, and what are the Earth Sprites beyond its Mayor Victor’s dream to have a luxury cruiseliner dock at the port and that you can see the sprites and no one else.

To keep it as spoiler-free as possible, I reached the end of the “upgrading Olive Town” plot and the whole thing left me extremely unsatisfied. It felt like I didn’t earn the ending given the bare minimum requirements (you don’t need to complete the museum’s exhibits).

While reviewing Story of Seasons: Pioneers of Olive Town, an update was released to fix the game’s loading times. The game was released in late February in Japan and this was one of the major complaints that fans shared online. That con even made it into our preview coverage. Luckily, a fix was implemented before the western release date and the difference is startling. With the patch, I could enable the game’s Wi-Fi features, seeing images that other players around the world have taken with the camera tool, and not be stuck in a 20+ seconds loading screen. With promises from the game’s producer to support the game by patching more issues and DLC releases being staggered throughout the year, Pioneers of Olive Town will become a bountiful entry in the series. For now, despite its flaws, it’ll woo a sizeable portion of the series’ fanbase and hopefully blossom into a polished game before these farmers move to greener pastures.