The original Splatoon made waves upon its initial release back in 2015, proving a fresh take on a genre typically plagued by uninspired tropes, muted color palettes and muscular Michaels. A quirky competitive shooter where fashion-savvy squid kids quite literally paint the town red, the game quickly super jumped to the top of Nintendo’s flagship franchises thanks to its accessible antics and painted premise. Now with the Switch flying off store shelves in droves, Splatoon splashes back with a savory sequel that not only refines what made the series so addictively endearing, but introduces a few fresh ideas of its own.

From the moment you take your first steps from the primordial ooze that is Inkopolis Square’s central hub, it becomes immediately apparent just how meticulously polished and stunningly gorgeous Splatoon 2 can be. Its colorful, neon aesthetic and penchant for puns (Crusty Sean, get it?) is equally matched by vibrant characters dripping with panache and personality. Small touches like flecks of glitter sparkling through your ink or the more fluid animations of the supporting cast of crustaceans pop and are pleasing to the eye, bringing the game world to life in ways previously unimaginable. And yet despite all these notable tweaks and details, not once does the action slow down below a smooth 60 frames per second in the heat of battle as the ink splatters far and wide during fully populated eight-player matches. 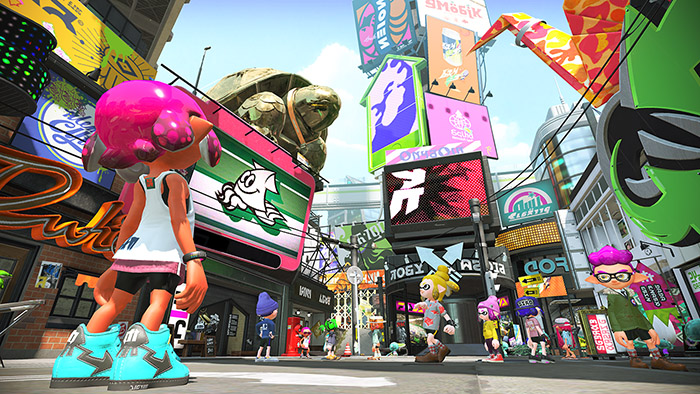 The game’s pop-rock infused soundtrack is also well worth shouting out, featuring slick beats and crazy-catchy themes that perfectly encapsulate the angst-riddled lifestyle of the indigenous squid kid. New pop-idol sensations Pearl and Marina naturally take to the stage with great aplomb alongside a synthetic symphony of energetic melodies and funky fresh undertones that elicit flashbacks to the memorable compositions of The World Ends With You. Needless to say, I’m a huge fan of all the squid garbled Spla-tunes on tap and don’t plan on deleting them from my playlist anytime soon.

For all you scrubs out there in need of some schooling, Splatoon 2 shakes up the tried-and-true formula of your garden variety shooter with a colorful dose of splattitude. Players don the digs of style-savvy cephalopods with a penchant for settling squabbles over turf through 4-on-4 battles using all manner of ink-infused mayhem. Of course, proudly splashing your team colors haphazardly is more than just a nifty way to keep score and claim territory, as you’re far more nimble when trudging through your own team’s filth. This forms the crux of Splatoon 2’s unique gameplay twist and is key to coming out on top of its eight symmetrical maps, allowing for all kinds of tactical strategies to emerge — like sloshing direct pathways to objectives, cornering foes for easy pickings, or simply establishing an ammo replenishing safe zone to submerge in.

Following in the ink blots of its predecessor, Splatoon 2 features a smattering of vibrant, ink-based weaponry for effectively smothering both enemies and turf alike. While the usual suspects, like trusty Shooters, wide-area Rollers and long-range Chargers, make their celebratory return, it’s the newly introduced Splat Dualies that steal the show. These dual-puppies come packing a powerful punch thanks to an insanely high rate of fire and ability to quickly dodge-roll out of harm’s way or get the jump on your enemies — especially useful when avoiding instant death upon launching directly into a hot zone. 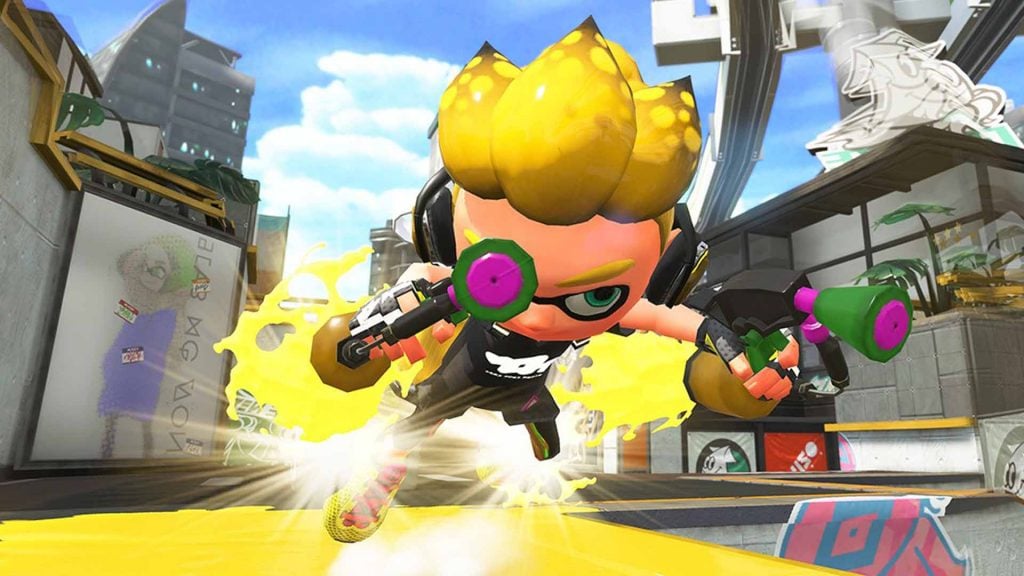 Special weapons have also been completely replaced with entirely new concoctions, from giant storm clouds that rain down pain on unsuspecting enemies to protective armor that shields your entire team from harm. My personal favorite would have to be the Tenta Missiles — a barrage of deadly, heat seeking ink strikes that are perfect for clearing clustered groups of foes — especially useful in the game’s many ranked modes. Bottom line, each type has its own distinct use that encourages diligent experimentation to fit your own, personal playstyle.

Just as important as the arsenal you choose to align yourself with is the sheer wealth of snazzy threads available for purchase. Beyond the pure satisfaction that comes with making a bold fashion statement, adorning your intrepid Inkling in this month’s hottest trends provides a range of randomly generated bonus abilities for getting a tentacle up in battle. These run the gamut from practical effects like increased ink recovery rates and faster movement speeds to highly specialized affairs that render your super jump landing points completely invisible to prying enemy eyes. Most notable, though, is a new mechanic that lets you scrub outfits of their current traits in exchange for their respective chunks, effectively letting you deck out your most fashion forward garbs with the attributes of your choice. Sure, it costs a pretty penny, and it’s worth noting that you can still try your luck by rerolling abilities for a randomly generated new set (at the expense of Splatfest exclusive Super Sea Snails), but it’s fantastic to finally have the option to customize your favorite gear to match your sense of style. 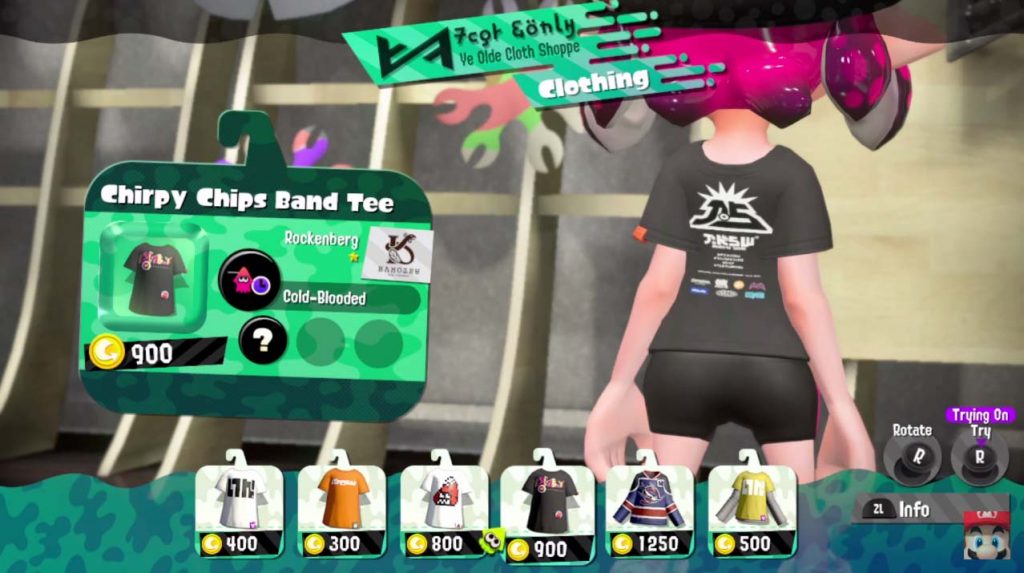 While Splatoon is largely known for its many fast and frantic multiplayer modes, both budding and veteran squid kids would be remiss in skipping over the newly improved single-player offering. While I would have much preferred a serious shakeup to the familiar and fairly linear 32 stage hunt for kidnapped Zapfish, the campaign quickly impresses thanks to creative platforming twists and turns — like stylishly grinding on ink-rails or riding atop giant floating Octostomps — that frequently ups the ante with each passing stage. Gone, too, are the days of being limited to the basic Splattershot for all your Octoling exterminating endeavors, significantly boosting replayability while proving the perfect opportunity to test each and every weapon type before taking the fight online. Though most intriguing are the brooding boss figures tail ending each whimsical world. From gargantuan, bread spewing toaster ovens to hulking, unicycle riding samurais, each fight is a visual feast that’s equal parts harrowing and hilarious. As battles progress, bosses adapt their attacks to hide their weak points, providing a healthy splattering of challenge that’s sure to keep even the most valiant of agents on their toes. 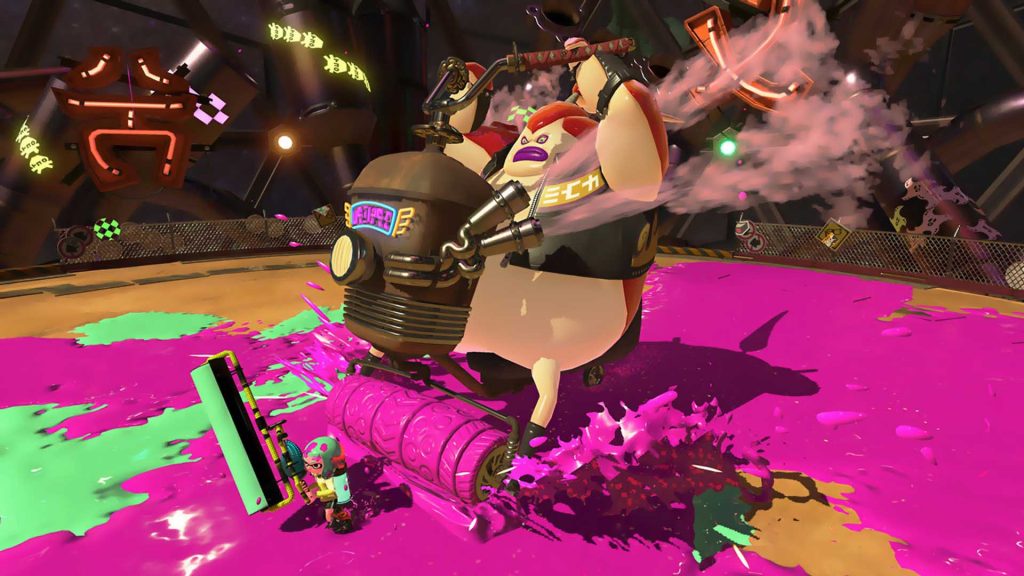 Of course, most of you probably aren’t going to purchase the game for its gripping narrative and endearing use of nautical puns alone. Fan-favorite multiplayer mode and Splatoon’s claim to fame Turf War once again marks its territory as one of the most exhilarating endeavors on offer. For the uninitiated, two teams of four compete by covering as much ground with their ink as possible, requiring swift movement, well-timed attacks and cohesive teamwork to reign supreme. It’s not all peaches and rainbows, though, as Splatoon’s original growing pains — like being stuck with random team compositions or locked into specific loadouts between matches — bafflingly continues to persist here in the sequel. It’s beyond frustrating to know that outside creating a private match or participating in League Battles there’s no way to guarantee being on the same team as a friend or swap out gear without having to completely abandon the current lobby. While perhaps mildly understandable for the chaotically casual Turf War, these tiny grievances unfortunately seep into the game’s objective-based ranked modes, too.

Luckily, ranked battles themselves remain just as thrilling as ever. Rainmaker, Splat Zones and Tower Control all triumphantly return, each proving exemplary renditions of modes commonly found in the best team-based shooters around. Rainmaker’s twist on capture the flag has two teams fighting to push a superpowered weapon through the others’ base; Splat Zones’ play on king of the hill has Inklings battling for colored control of specific areas on a map; and Tower Control has you escorting a floating pillar of death and destruction towards a heavily guarded goal. With the focus shifted towards specific objectives, these modes are great for competitive players seeking a more traditional challenge that’s not as reliant on passively inking turf. 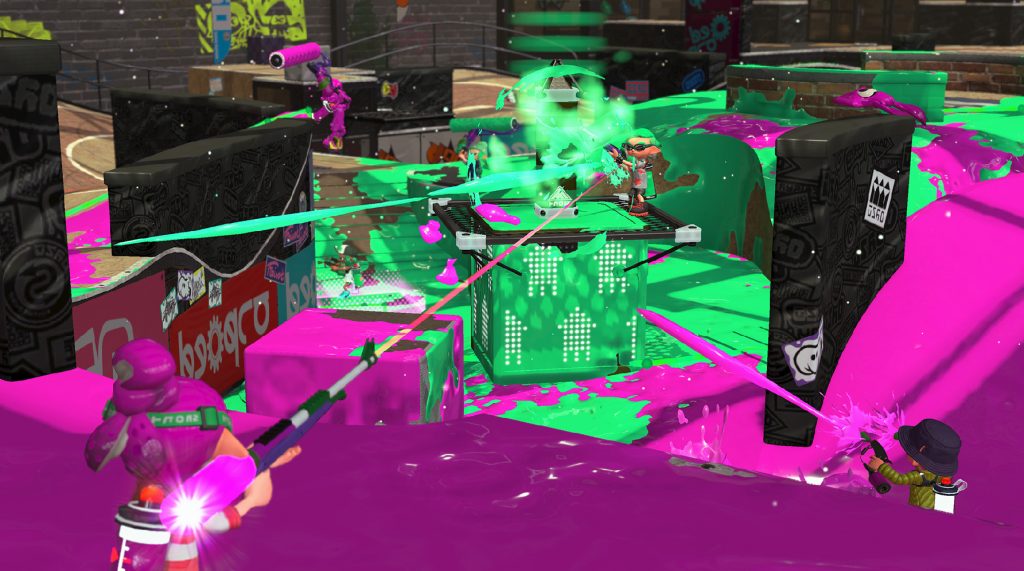 Yet for all of Splatoon 2’s enigmatic charm and attractive modes, it’s newcomer Salmon Run that deftly comes out on top. As delightful as it is gut-busting, you and up to three other players are pit against three timed waves of formidable fish folk while collecting a quota of mysterious golden eggs from behemoth boss creatures. Along with a swarm of less threatening chum, these Boss Salmonids, as their appropriately referred to, come outfitted with all kinds of makeshift weaponry and armor fashioned out of discarded cookware and all manner of long-forgotten garbage. But don’t let their trashy fashion sense fool you: Each of the eight mutant variants are as vicious as they come — my favorites being a ghastly, Jaws-like shark that’ll pull the ink from under you and a sneaky sniper perched high upon a wobbly tower of pots and pans. Each carnivorous critter is incredibly well-designed with matching attack patterns to fit their repulsive personalities, and I can’t help but fantasize about the possibilities of seeing them all as coveted amiibo somewhere down the line. (Hey, a squid can dream).

Of course, communication is key should you wish to avoid becoming Salmonid seafood. Playing locally or online with friends is an absolute blast as teammates frantically shout out orders, direct each other towards objectives and counter being overwhelmed by swarms of shuffling fish dinners. Given this emphasis on teamwork, it’s a shame Nintendo’s “app for that” approach to voice chat and matchmaking isn’t up to the task, as the already inelegant and cumbersome process of being tethered to a secondary device is riddled with battery draining issues and connectivity hiccups. It’s with great remorse that I once again need to emphasize it’s the year 2017 and Nintendo still doesn’t have a handle on standard online practices. You know there’s a problem when you have to turn to a competing console’s party chat features to effectively play Nintendo heavy hitter franchises, and it baffles the mind how this has yet to be taken in any serious capacity. 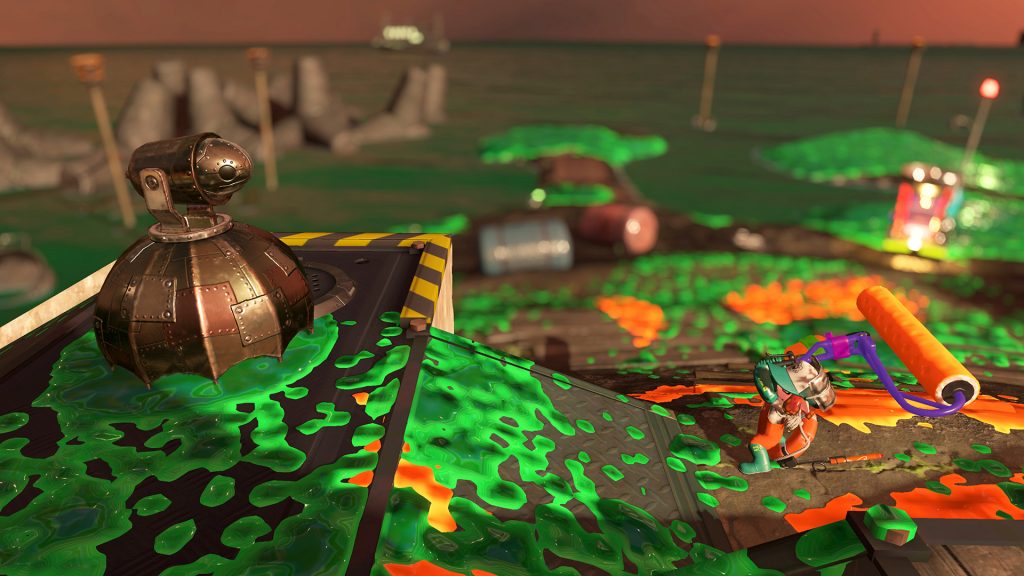 Speaking of things in dire need of fixing, and for reasons I’m not sure the king of spin Reggie himself could defend, online matches for Salmon Run are restricted to certain days of the week during very specific time slots. Whether to assure increased traffic or limit the number of rewards that could be earned consecutively, there are definitely far better solutions than whatever logic Nintendo’s clinging to than outright denying players Splatoon 2’s crown jewel. It’s worth noting the plucky co-op mode remains unlocked at all times for local runs, though many like myself who have friends and family scattered around the globe will find little solace in that paltry olive branch.

Nintendo could have easily slapped a new coat of paint over the Wii U original and called it a day. Instead, we were graced with a full-fledged sequel complete with a carefully crafted single-player campaign, multitude of online modes and the seriously addictive co-op romp Salmon Run. Aside from a few blots in its handling of voice chat and missing the mark when it comes to various matchmaking standards, Splatoon 2’s expertly painted premise proves a masterstroke in must-own multiplayer mayhem that’s sure to wrap its tentacles around you tight, long after the promise of continued support dissipates. 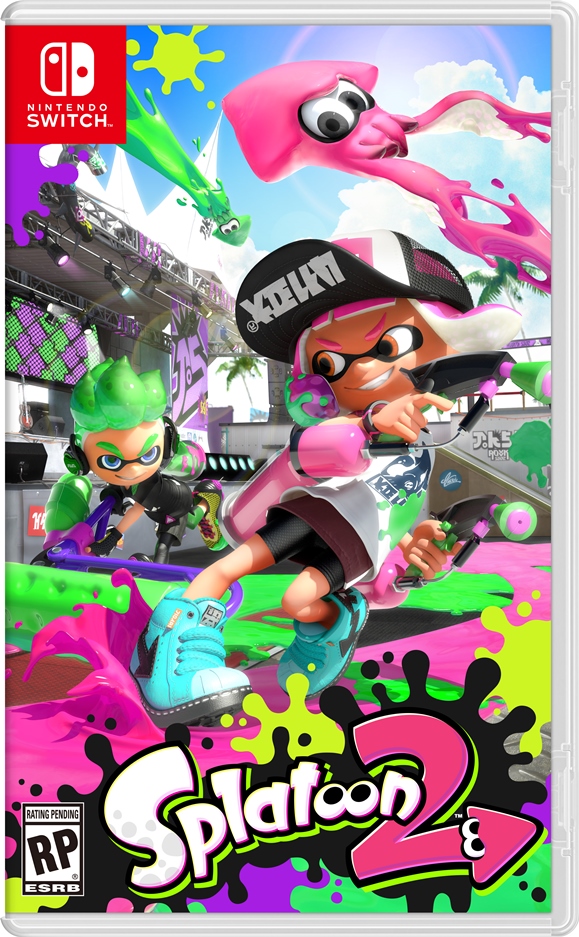