The classic Sonic the Hedgehog games are no stranger to getting the compilation treatment. Most Nintendo fans of a certain age will fondly remember Sonic Mega Collection with its amazing menu music, huge variety of games, and array of extras, and a few years before that there was Sonic Jam and its early 3D Sonic World. Of course there were plenty of barebones collections, too, offering the games and nothing more, with varying emulation quality. Needless to say, no matter when you got into gaming there was some way to experience most of the classics.

Now Sonic Origins is here to give that opportunity to an all new generation of fans, but unfortunately there are a few spikes stopping it from being a runaway success. 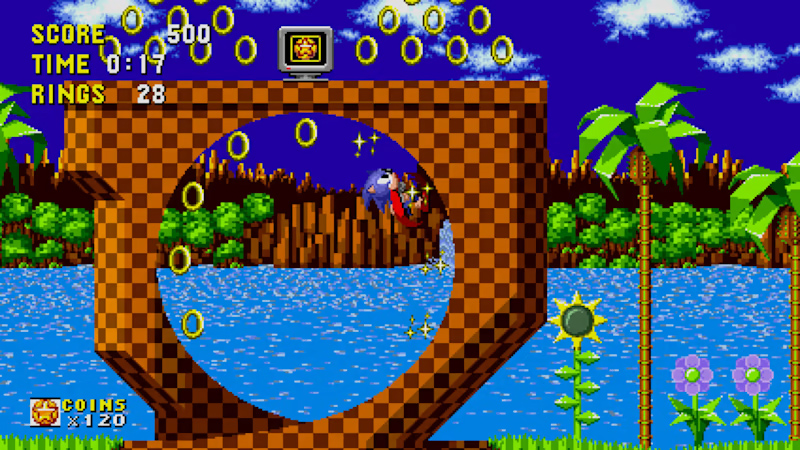 Sonic Origins collects four games and presents them in a specific order – Sonic the Hedgehog, Sonic CD, Sonic the Hedgehog 2, and Sonic the Hedgehog 3 & Knuckles. The reasoning for CD’s placement is steeped in Sega’s internal international rivalries at the time, but nevertheless it works as a solid bridge between 1 and 2, mechanically.

One fun feature of the game is the Story Mode, inexplicably accessible through the “Mission” menu option, which ties together each game as a cohesive whole by implementing all-new gorgeously animated cutscenes. The connection between the classic Sonic games was previously just implied or hidden in the manuals so it’s fantastic to finally see it shown, with even obscure tidbits of trivia like Amy Rose’s fascination with tarot cards getting a heavy spotlight. These cutscenes do still play when you open the games individually, but it’s much more exciting to seamlessly go from saving Little Planet to bumping into Tails and entering Emerald Hill Zone. 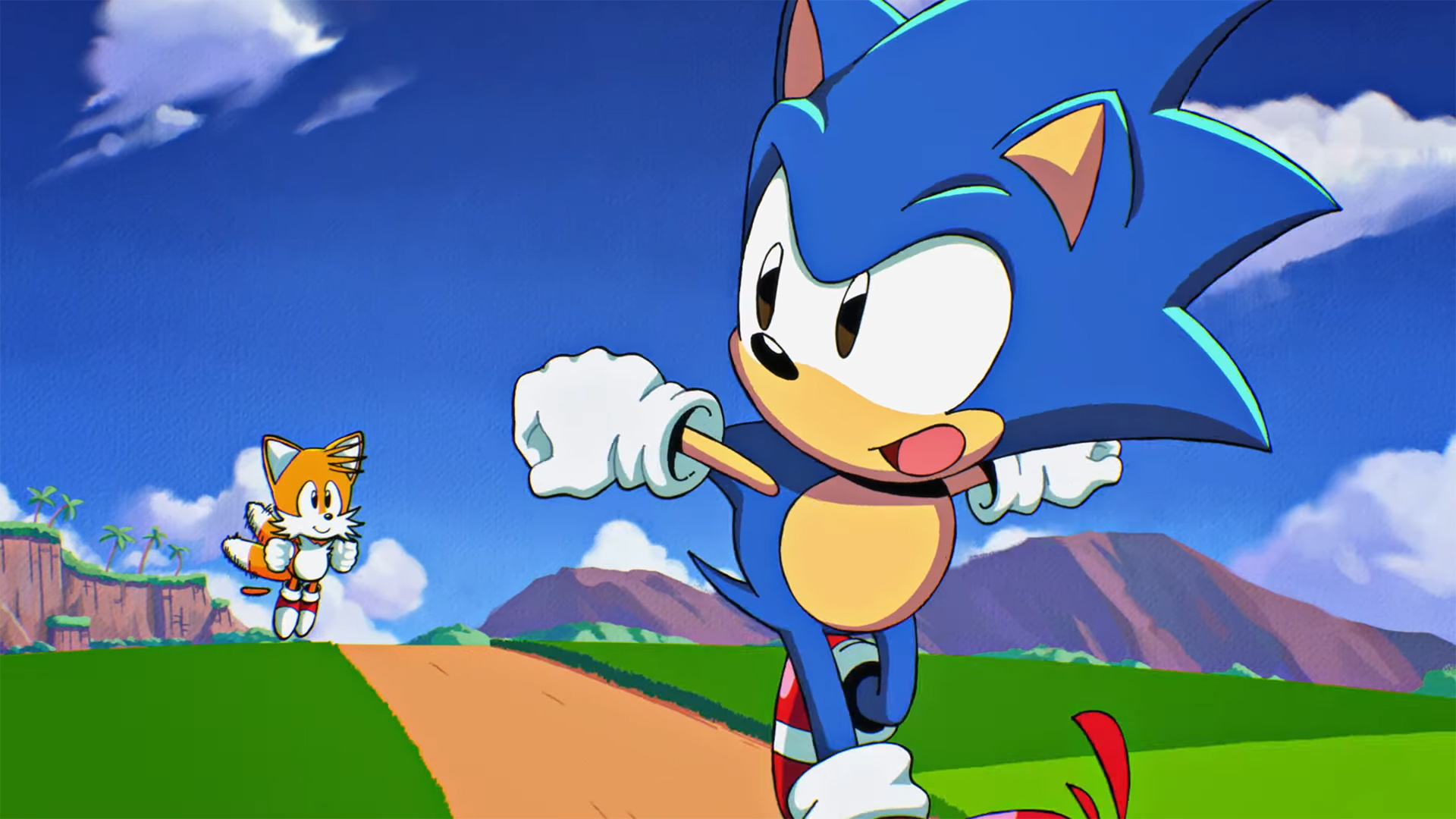 Unfortunately playing the games this way does have the unfortunate side effect of frontloading new players with the more experimental entries. Sonic 1 is a much slower paced game than most every other game in the series, and while some fans will swear by CD, I can’t say I’m partial to its mechanics. Nevertheless they’re both influential and enjoyable romps despite their flaws, and thanks to the Anniversary Mode (which is what’s used for Story Mode) they’re made much more palatable.

Anniversary Mode is essentially an expansion of what the previously released Sonic 1, 2, and CD mobile ports accomplished many years ago. They fill out a full 16:9 display, giving us Sonic 3 & Knuckles in widescreen for the first time officially, and add extra features like the spin-dash. Origins goes a step further by introducing Sonic Mania’s Drop Dash and totally gutting Lives entirely, replacing them with Coins. These can be used to purchase items in the Museum, more on that later, but their best use is making Special Stages much less frustrating.

If you fail a Special Stage while playing in Anniversary Mode you can simply spend one coin and retry it. Naturally this makes Super Sonic and the Good Endings more attainable than they’ve ever been. If you’re worried that’d make the game too easy then you’ll be happy to hear the Super Sonic trigger has been moved from a second jump to the X button, meaning you can see the full finales without feeling overpowered, if you can resist the temptation. 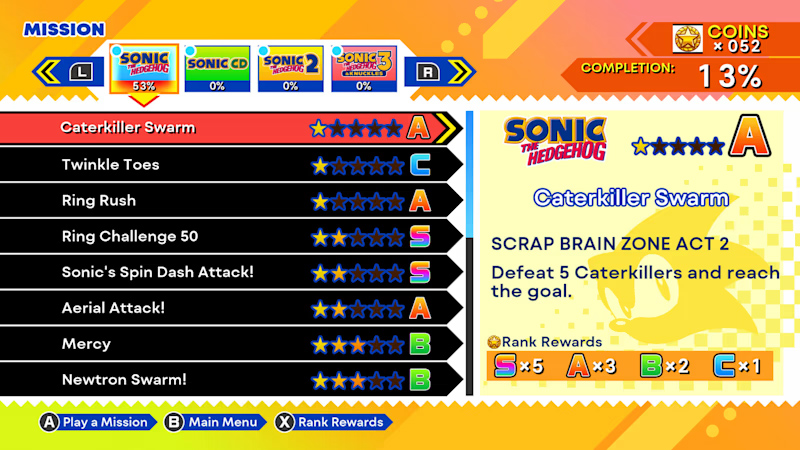 While coins can be obtained in the ways you’d normally obtain Lives in each game, they can be gotten en masse by completing Missions. These custom-made challenges are very similar to those found in Sonic Generations, where you’re given small tasks like not getting hit or using see-saws to obtain a certain number of rings. Missions are a great addition, not just because they add more content but they also offer a unique look at certain levels, with enemy placements, platforms, and objects being wildly different at times.

In a smart move Origins also offers up a Classic Mode for each game, presenting each in the original 4:3, reinstating lives, and getting rid of additional features like the Spin Dash and Drop Dash where applicable. The updated 3D version of Sonic 2’s Special Stage is still in effect, however, meaning they aren’t 1:1 recreations. 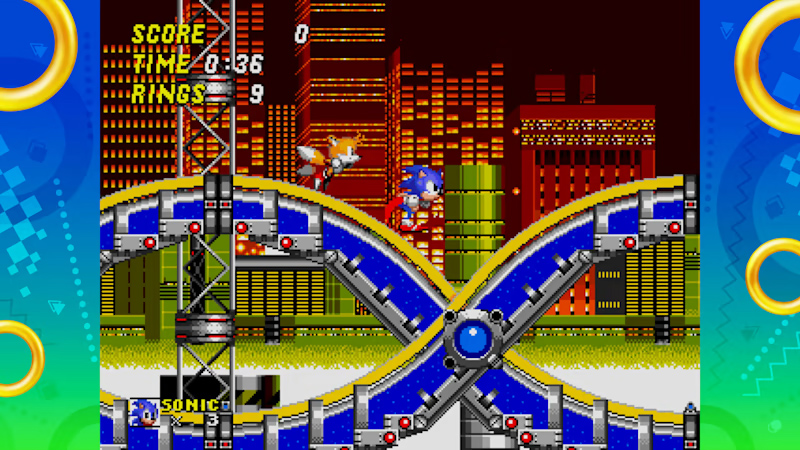 Much was said about the game’s music leading up to launch, as well. Namely, a variety of Sonic the Hedgehog 3 tracks have been replaced with earlier cut prototype versions due to legal disputes. Personally I understand the decision, but the replacements do sound a little off, and the lack of Ice Cap Zone’s iconic beat will be a major loss no matter what replaced it.

Unfortunately, what could have been a slam dunk is foiled by the simple fact the ports aren’t perfect. Since release the internet has been abuzz with claims and footage of glitches, and while I personally haven’t experienced much, as a long-time Sonic fan I definitely noticed inconsistencies with how each game plays and presents itself. Getting too far ahead of Tails, for example, can lead to an incessant jumping noise even when you’re miles ahead. Springs are also occasionally too powerful and hitboxes can be strange. Stealth, the lead developer at Headcannon, has spoke out about these issues and with that there’s a glimmer of hope things could get fixed in a future patch.

While the games are obviously the main appeal of compilations like these, the best bundles are those that delve deep into the series’ history, and while Origins doesn’t hit the dizzying heights of Mega Collection and Jam, it has a solid suite of features.

For starters there’s the main menu which consists of 3D renders depicting each game’s setting. Just as it’s fun to see cutscenes link the games narratively, it’s fascinating to see the different landmasses side-by-side. In Sonic 3’s case the notorious Barrel of Death even gets a cameo, floating menacingly above Angel Island. In a great touch the two extra menus, Mission and Extra, are represented by islands from Sonic Spinball and Sonic 3D Blast. In a way it almost makes me wish those less-than-stellar games were added to the collection too, but considering the developers were seemingly strapped for time as-is I’m content with these cute little references.

The islands are made much more entertaining by buying the Digital Deluxe edition or separate DLC, as the “Premium Fun Pack” adds models of characters and a controllable camera to the mix. This not being part of the core game but instead sold separately alongside a few borders and museum music tracks feels as slimy as Sonic Spinball’s Toxic Caves, coming across as a desperate attempt to put some DLC into a package that fundamentally isn’t built for it. Only the more difficult missions included in the pack feel like something suited for piecemeal release. 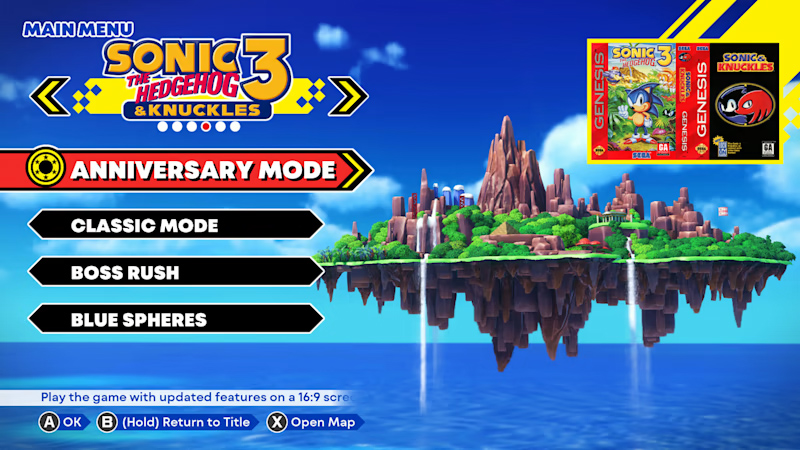 As for the museum, it features music, illustrations, and videos. In each category you can unlock content through playing the games (such as defeating a certain number of badniks) while a Premium section is purely for spending coins. There are some true gems in here, like IDW comic covers and early European advertising documents, plus the entirety of the great Sonic Mania Adventures animated series. It would have been nice to see more love shown to the entire Sonic series, and perhaps some classic commercials, but I could see new fans scrolling through these menus with the same wonder I had playing Mega Collection back in the day. 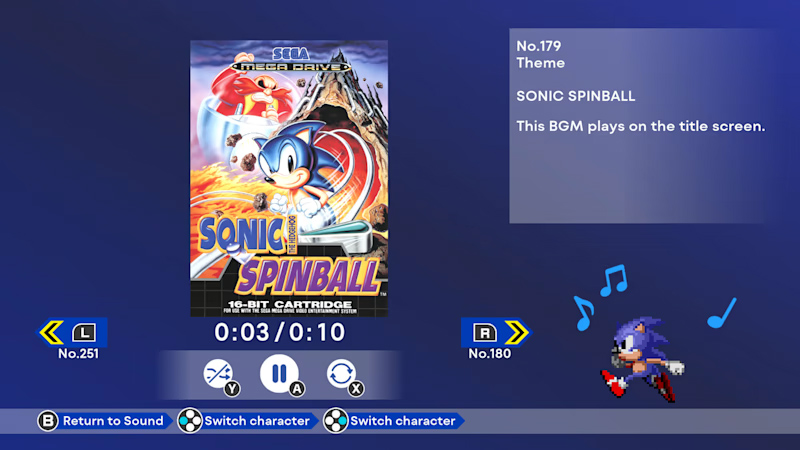 In almost every way, Sonic Origins is a success, except for where it truly matters – the games themselves. What could have been a fantastic celebration of some of the greatest 16-bit platformers out there is instead a tentative recommendation to new fans and a difficult sell for those who’ve spent decades of their lives running in Sonic’s shoes. I’ve enjoyed my time blasting to the past, but it’s fallen frustratingly short of living up to my memories.

See you next update? 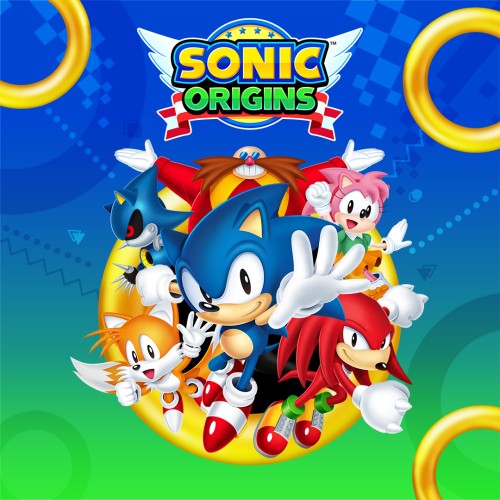