Disclaimer: The following review was completed using the PlayStation 4 version of Sonic Mania. After playing through on the Switch version as well, we’ve determined impressions and score still hold though there are some minor performance issues on the system.

Some of my earliest memories are of playing Sonic 2 nearly every day before heading off to school. The bright, imaginative world and superlative soundwork made this game something special, carried by a super fast blue hedgehog and his two-tailed friend. In time, I’d get my hands on Sonic 3 & Knuckles, meeting their red rival, and experiencing an adventure so expansive at the time that it needed to be on two cartridges. The identity these games had and their exemplary quality are traits the franchise drifted away from over time, with most titles instead taking inspiration from the later Sonic Adventure on Dreamcast.

Regardless of your feelings for later games, it was about time we get something that didn’t just pay tribute and keep pace with Sonic’s peak, but sometimes took the lead and outsped those classics. Fast forward to the here and now, and after having played through Sonic Mania three times over and then some, I can say with confidence that it’s left those expectations in the dust to be just what we needed.

Marking the 25th anniversary of the series, Sonic Mania brings together redone zones from four past games and a few brand new ones to run, fly and climb through. Rather than a mere “greatest hits” compilation, this is more a mixtape put together by die hard fans pulling crowd pleasers and deep cuts from nearly every corner of Sonic’s 2D history. Visually, the game is a natural next step for the Genesis-era games and it looks absolutely fantastic, with sprites and backgrounds both deserving your full attention while remaining distinct from each other even at high speeds. The story’s told through brief cutscenes and stage transitions, and though there are some zones without these, there was enough substance to paint an idea of both the narrative and the journey itself. It’s all suitable for the feel and homage the game is going for, with the opening lifted straight from Sonic 3 — and Sonic CD getting some extra special attention midway through. 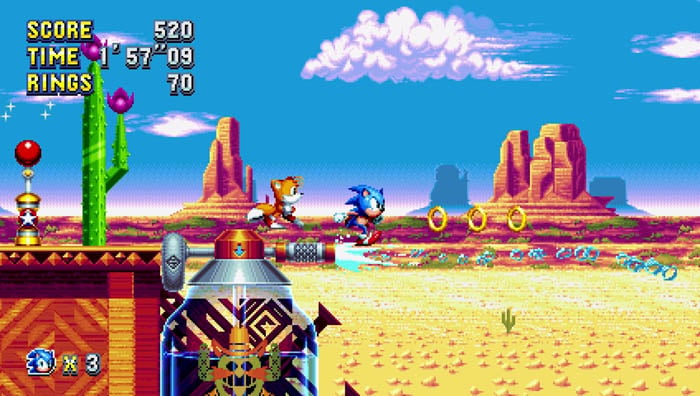 With respect to gameplay, there isn’t a lot here to differentiate the game from its predecessors. The same one button design of the classic series works just as well here, with the availability of Tails and Knuckles adding in variety and replayability. Sonic himself has received a new mechanic called the Drop Dash, which gives him the ability to come out of a jump with a revved up Spin Dash, allowing for momentum to be maintained or quickly built. It, along with the trio of elemental shields from 3 & Knuckles, make Sonic feel less like a plain option compared to his aerially inclined allies and reinforces his trademark speed.

Speaking of which, the level design is well done with speed feeling like a reward for playing well, but also occurring through flashy roller coaster-like segments. If momentum is lost, it’s not too hard to get back up to pace thanks to the stages’ architecture. That said, it pays to slow things down every now and then to simply explore and experience everything these acts have to offer, finding routes and testing yourself to pull off quick, clean runs once you have a plan. 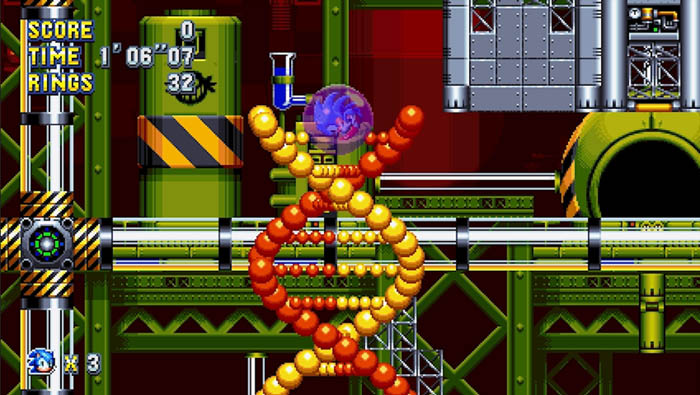 Slowing down to catch your breath

As much as I enjoyed the zones themselves, there are a few low points to the overall experience. Occasionally, moving stage elements happen in such a way that you’ll lose a life from being crushed. While some of these were justified and were clearly caused from me putting my character in the wrong place, there were also moments that felt unjustified and sudden. This isn’t new to the series, though the return is as frustrating as it is faithful to the source.

Boss fights are also mixed bags. From design and creative standpoints I found them all appealing, but some just felt tedious and occasionally even not fun. They’re few and far between, but enough so that it was worth noting. That said, for every one I dreaded as I replayed the game were others I couldn’t wait to get to. Chemical Plant’s fight stands as one of my absolute favorite parts of the entire Mania experience, and Studiopolis (perhaps the crown jewel of the brand new zones) has a pair of enjoyable encounters as well. 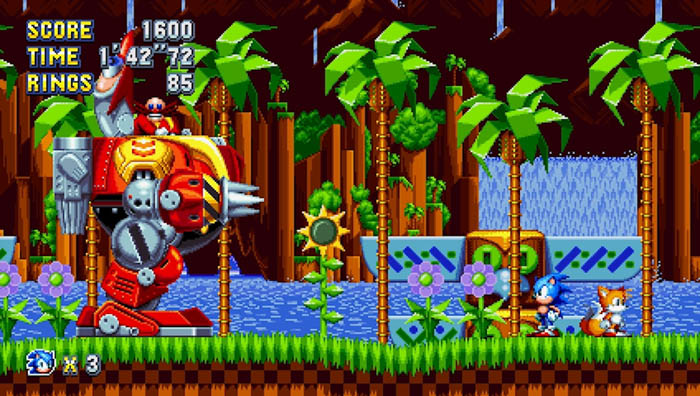 It bears mentioning that if you’ve never been fond of classic Sonic games, Mania may not win you over. Even if that ends up being the case, the journey is worthwhile. I encourage you to try it if you get a chance — and if you love the games already, you owe it to yourself to pick it up, as this is truly one of the most lovingly put together, well crafted games I’ve played in a long time. It feels like every single zone from the Genesis-era games is represented in some way, be it via a mechanism, an enemy, or even some iconic elements of past zones given new twists.

The Blue Sphere bonus stages make a return, with your progress of completion tracked by the game. As I played through the game and completed these bonuses, I unlocked tweaks, secrets, modes and more, adding incentive to revisit them beyond my own fondness. These and the three available characters give the game added length beyond a single playthrough as Sonic, with Knuckles especially making the game feel distinct due to some encounters and areas unique to him and a generally more explorative feel to his skillset. 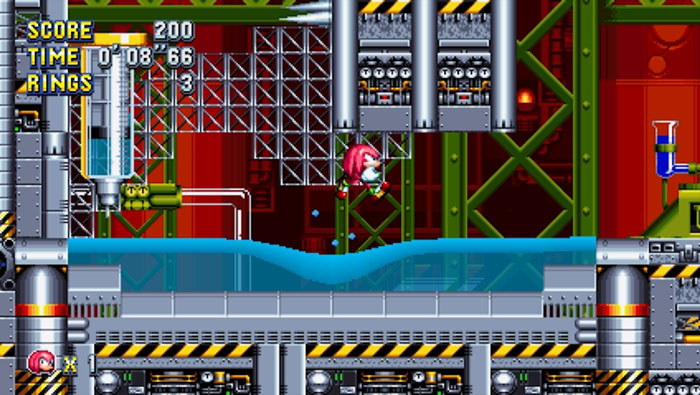 A real gem of a celebration

Past the core game and the unlockables, there are Time Attack and Competition modes to play through. Having an easy way to track run times and the presence of multiplayer only adds to the core package. Anyone after the full experience should make it a point to gather up all the Chaos Emeralds too — not just for what they unlock, but because the new special stages make the game feel completely worth it. In fact, they might now be my favorite in the series. Chasing a gem-carrying UFO around a track as a polygonal, Saturn-esque Sonic while gathering up orbs and rings to build up your pace and time respectively is a lot of fun, and it tests your reflexes and precision once you’re at full speed. Once I had the feel for them down, they were a blast to complete. They provide ways to grab the Emeralds even before reaching top speed, rewarding players who can understand the track layouts with well timed jumps and corner cuts.

Beyond everything I’ve said already, the heart of Sonic Mania lies within the people who created and worked on this game. Crafted by people with experience creating their own fangames in the past and making polished ports of the classic games themselves in more recent years, Sonic Mania is a realization of what Sonic was and what it can still be. I’ll be playing this one plenty more to push myself to go just a little faster and see every corner of its zones I can, all while taking in the superb soundtrack and eye-pleasing environments. It isn’t all nostalgia either, as the creativity on display from the original content both fits in with the remixed elements and stands out on its own merit. The success of Sonic Mania has me excited for what can potentially come from a completely original, collaborative effort, similar to this, in the future. For now though, I’ll continue running through this masterpiece — made by the mania, for the mania. 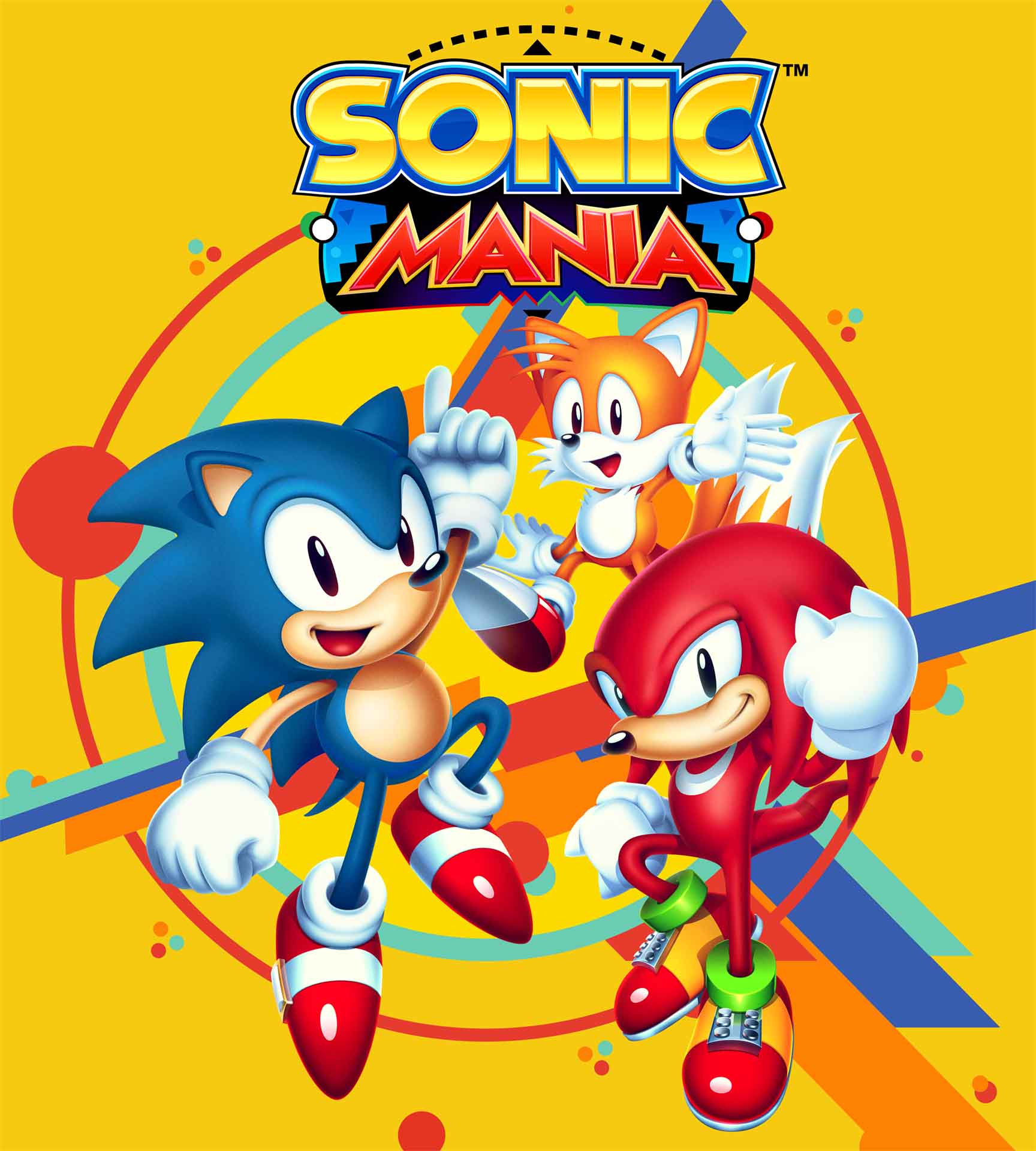