In 2010, Sonic Colors was a revelation. After the infamous Sonic the Hedgehog 2006, the controversial Sonic Unleashed, and a bunch of spinoffs of varying quality (the Rush games were great though), we finally had a home-console game from the blue blur that most folks agreed was pretty solid.

Now the Wii game is back almost 11 years later with a remaster, but does it still hold up, and are the updates worth boosting through?

Sonic Colors took the best part of Sonic Unleashed, the daytime running stages, and made a whole game around them. That said, while it’s easy to assume you can “boost to win,” things are more complicated than that. A large percentage of the stages in the game could be completed by running to the right at top speed, but there are a handful that task Sonic with more precise platforming, and oftentimes on your first run-through you won’t know the optimal route. It’s no surprise fans of the classic Sonic games often find themselves enjoying Sonic Colors — in many ways it adopts the same core conceit of fast speed being a reward for exploration and experimentation. 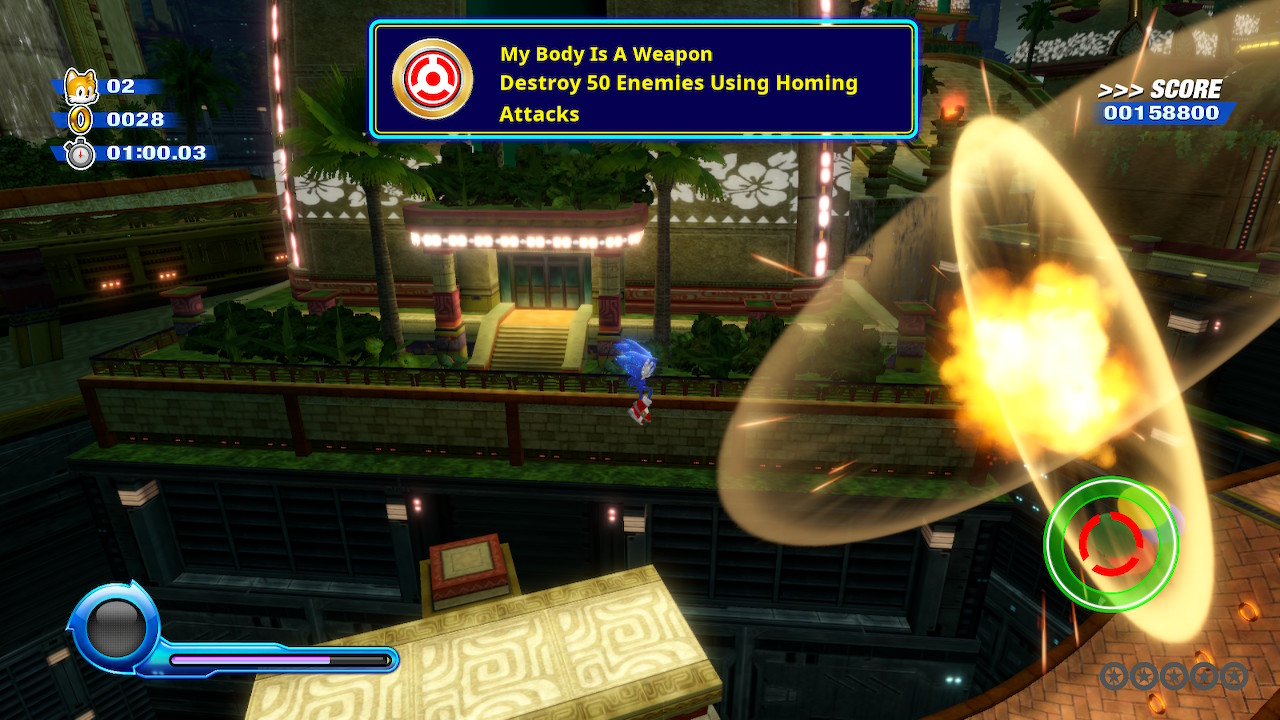 This exploration is encouraged even more thanks to the collectible Red Rings, of which there are five in each standard “Act,” plus the brand-new Park Tokens which can be exchanged for cosmetics. (More on those later.) Combine all of that with the Wisps that grant Sonic a range of abilities for traversal and you’ve got a game with a whole lot of replay value.

There is one significant change to how the game is balanced, however, and it’s one that proved controversial even before the remaster came out. Instead of the traditional lives, you pick up “Tails Save” tokens. Now, if you fall into a bottomless pit, Sonic’s two-tailed buddy will rescue you and plonk you on a nearby platform. In the process you retain all of the collectibles you picked up, which is a huge relief given how finicky some of the jumping can be. 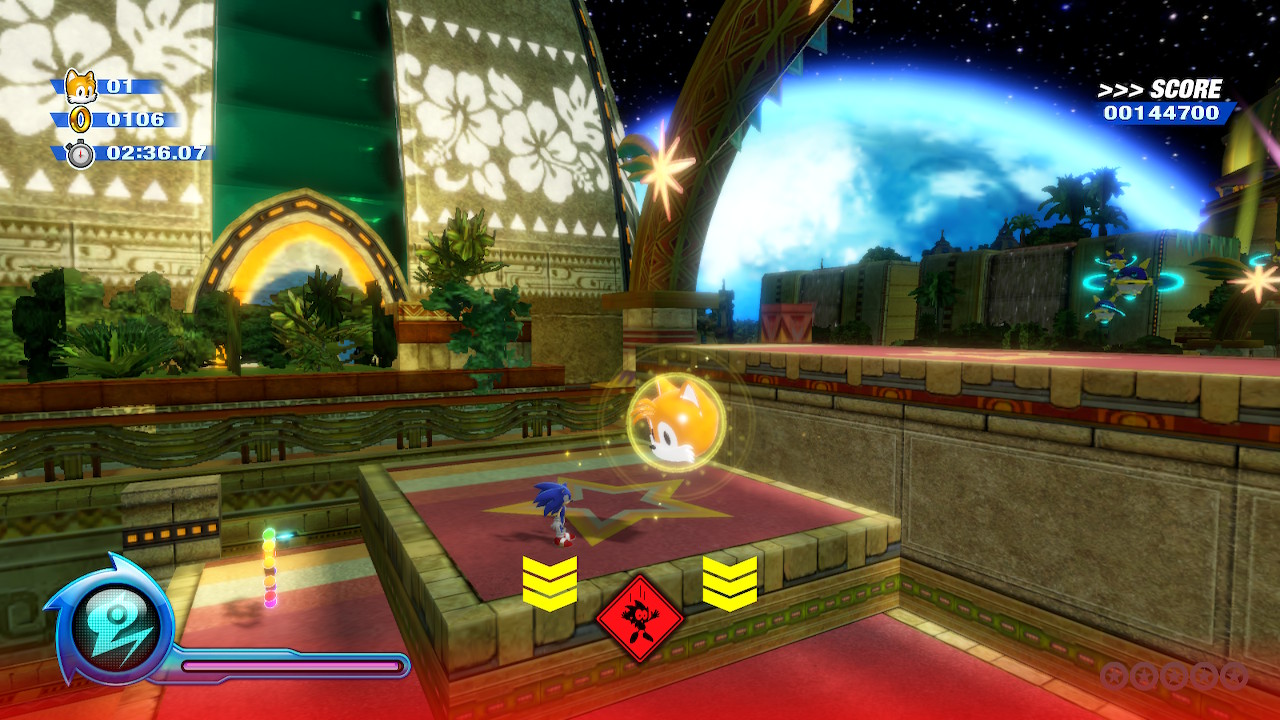 Tails Save doesn’t come into effect when you die by other means, however, like running out of rings or being squished. These return you to the checkpoint as usual… but you don’t lose a token. This essentially means you can repeatedly retry from your last checkpoint, and while this will reflect poorly on your score (the timer keeps running, after all), it does make the game much easier.

Personally, I think Tails Save is a clever addition that makes collecting Red Rings seem much more attainable, but it’s surprising the option isn’t toggleable for those who want an experience more like the original release.

The Rival Rush is another new feature and while it appears pretty basic on the surface – you race Metal Sonic through a level you’ve already completed – it can prove quite challenging as it essentially turns the levels into a time attack with every death necessitating starting from the beginning. If you’re an aspiring speed runner, you might enjoy the challenge. 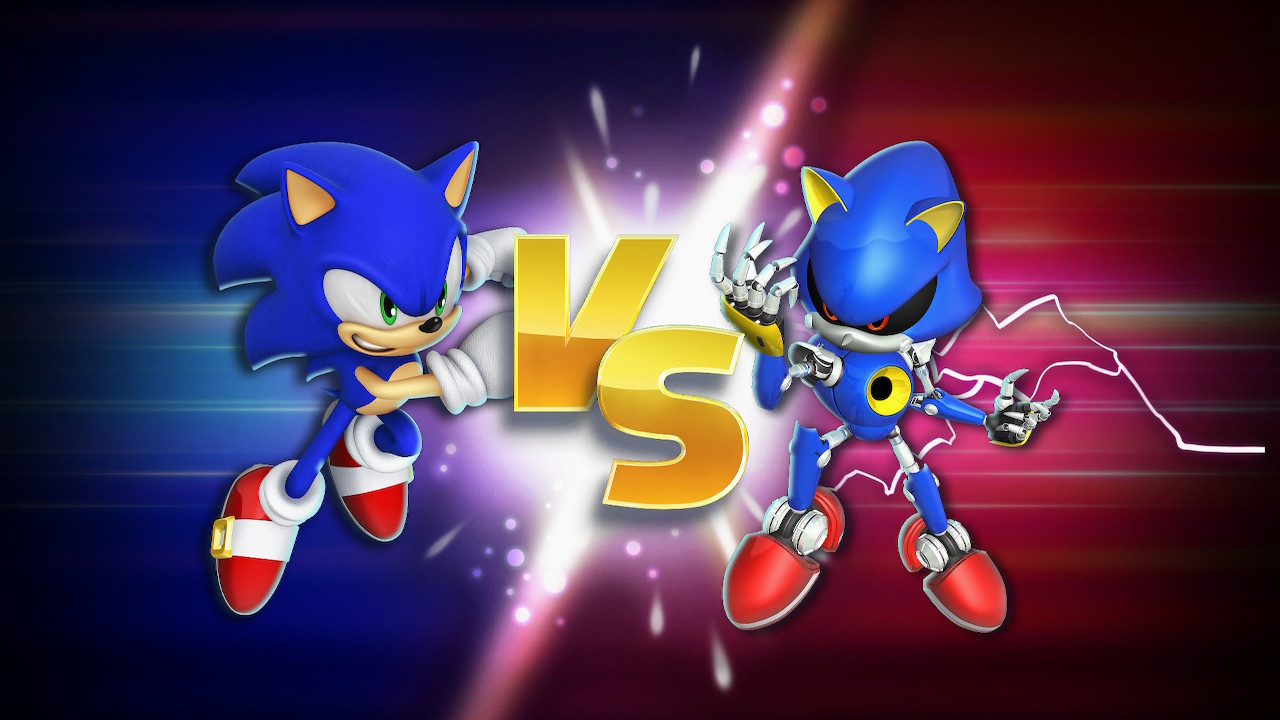 See the colors all around

Another part of the game that was controversial pre-release was the graphical updates, with many fans feeling they messed with the artistic vision of the original game. While it’s undeniable that the visuals are markedly different, I can see the arguments for both styles, especially when comparing and contrasting different stages. The initial run of stages, Tropical Resort, looks decidedly muted, for example; while Starlight Carnival’s neon colors become beautifully vibrant with the up-res. 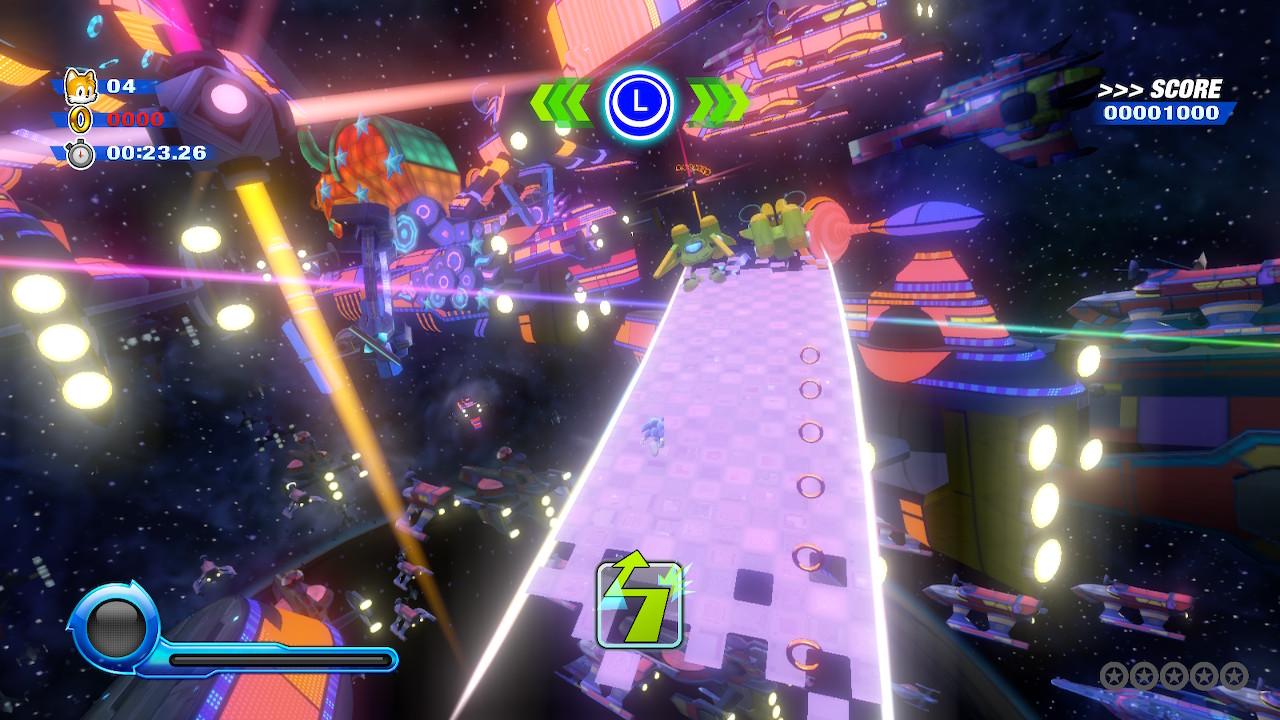 The music has also been remixed and I can see the new soundtrack proving much more universally accepted, with it maintaining much of the same atmosphere just with a fresh perspective. It’s still a shame you can’t toggle the original tracks, though.

Another addition to the game is cosmetics. Bought with the aforementioned collectible coins at the Options Satellite, you can change a few of Sonic’s aesthetic features, but don’t go in expecting anything as wild as Sonic Forces’ “GAMER” hat. These items simply change Sonic’s gloves or shoes, change the boost effect, or give him an “aura.” He’s still true-blue regardless, which is a bit of a shame, but saving up for these options makes for a more immediate incentive to explore beyond getting Red Rings and working towards Super Sonic.

You can also buy display pictures for your profile, which doesn’t really do much but I just want to bring it up because there are some bizarre Sega deep pulls, like Clockwork Knight and Rent A Hero.

There is one major flaw of the Nintendo Switch version of Sonic Colors: Ultimate, specifically. While the PlayStation 4 and Xbox One versions run at 60fps, the Switch port runs at 30, the same frame rate as the original Wii game. On the surface this isn’t so bad, especially if you’re only familiar with the initial release, but there’s a rub — slowdown. It’s not frequent, but the game can get noticeably choppy when you’re boosting through enemies or using a Wisp ability. Thankfully it’s over quickly, but when the game is as fast paced as it is, it can be very distracting. 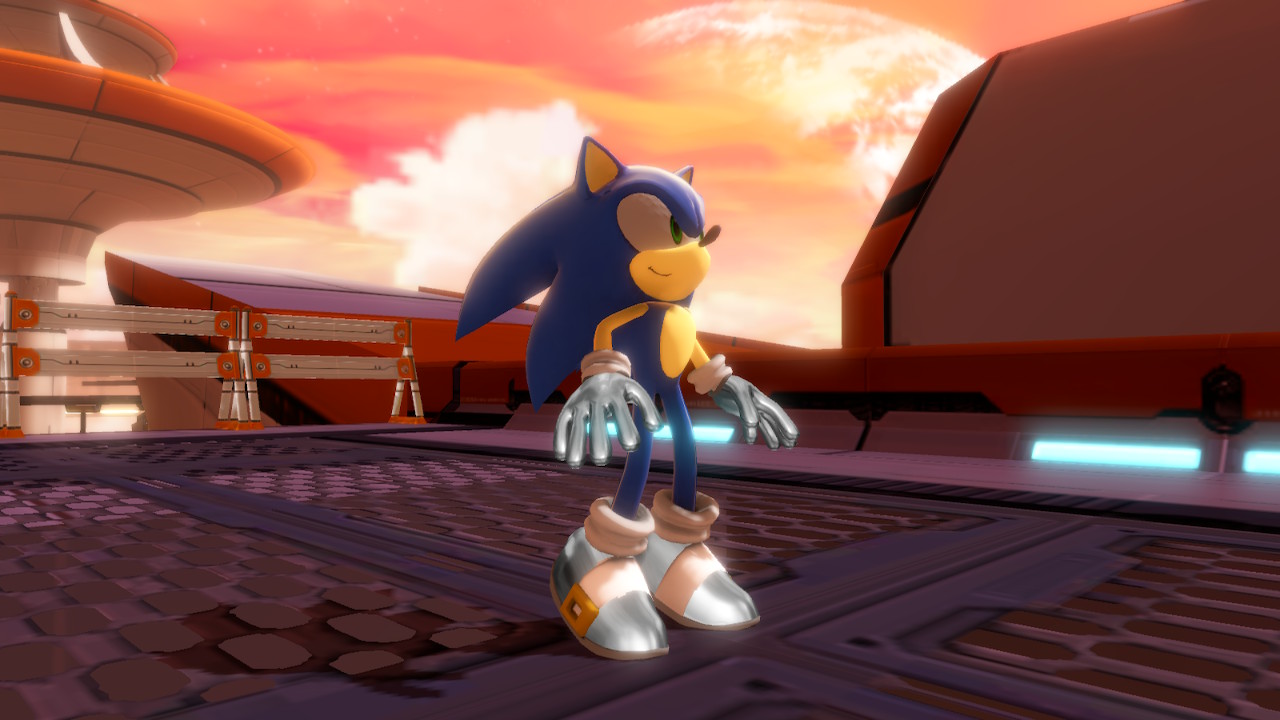 Similarly, the game’s load times are noticeably long, with it taking a while to get into the action after you select a stage. Luckily, it doesn’t load when you die, meaning the fast-paced gameplay doesn’t get interrupted.

There’s also the elephant in the room that has emerged after the game’s early launch for digital pre-orderers – bugs. Personally speaking, I have only encountered two bugs during my play time. In one case Sonic essentially flew off the stage to his doom even though he should have been on a pre-set path, which was immediately followed by a homing attack segment which had an extremely small window to react. Much worse was a hard crash after selecting one of the zones from the world map – a minor problem in the grand scheme of things, but if it can occur during other loads (such as after beating a level) I could see it being a huge problem. Here’s hoping Sega issues a patch for the game to bring it up to par with the original Wii games’ level of polish.

The Return of Baldy McNosehair

At its core, Sonic Colors is still a great game and one of Sonic Team’s best in recent memory, but it’s not quite as refreshing in 2021 as it was in 2010. The writing is very basic, albeit with a few good jokes, and Sonic can feel slippery to control when you want to be precise — in general it feels like it’s lacking a certain amount of polish.

Still, if you’ve yet to play it, it’s definitely worth running through, if only to experience the stellar soundtrack. 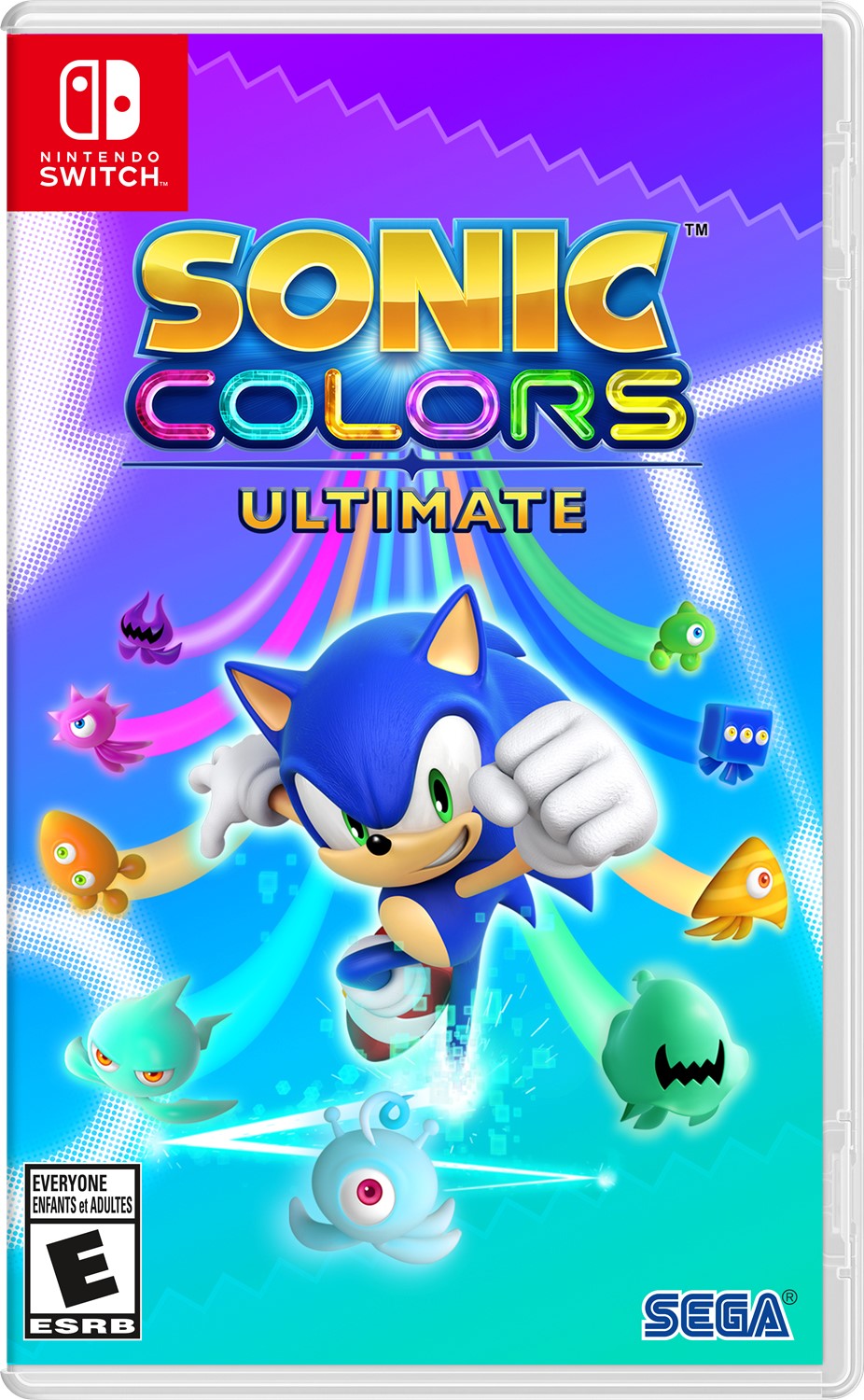