Shovel Knight has plenty of game appearances under his earth encrusted belt, yet it’s only now that he’s stepping out of the shadow of that original Kickstarter. Yes, the scope of Yacht Club Games’ inaugural effort grew incredibly, but we’ve finally stepped onto untrodden soil for the studio. This partnership with Vine lives comfortably in the world of its predecessors, even introducing its own lore and characters.

There’s charm in seeing the familiar cast in a new style, but it’s important to remember that Shovel Knight sold itself to so many on the promises of its gameplay alone. I’m happy to report that that’s the legacy Pocket Dungeon lives up to, blending falling block puzzles and rogue-like dungeon crawling in an addictive, replayable package. 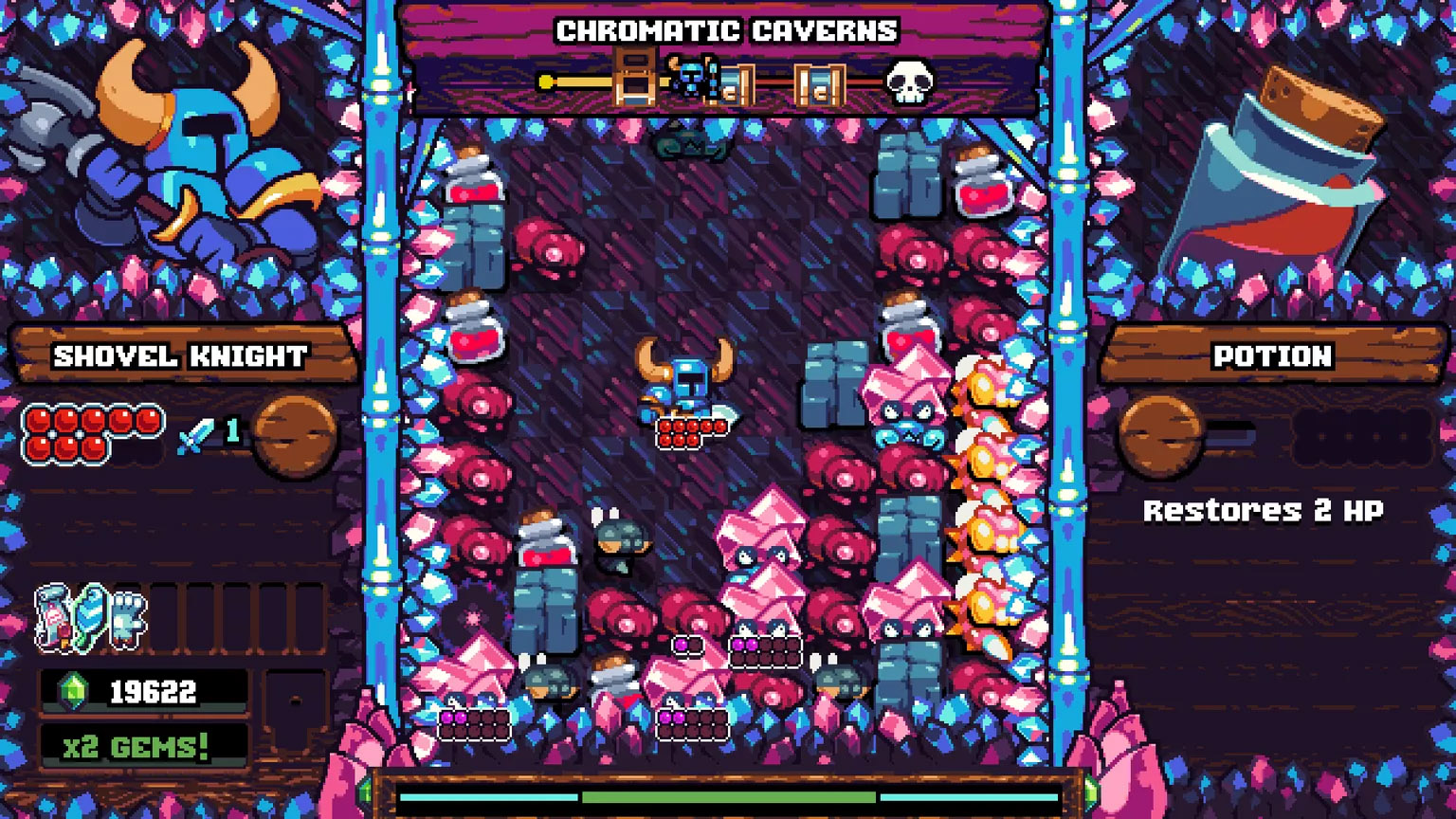 Upon finding a strange relic, the Blue Burrower ends up in the mysterious Pocket Dungeon. Its grid based depths serve the perfect backdrop for this meld of gameplay styles, curated by newcomer Puzzle Knight. In his pursuit of knowledge he’s established quite the homebase, serving as your hub and a showcase of your progress as you unlock characters and more. It’s nothing fancy, but I definitely appreciated all the minor visual touches and amount of text-based dialogue I could find there.

It doesn’t take long to learn the basics of how to traverse this titular enigma, but dozens of runs in and I’m still learning more. As you move space by space on a board, enemies and blocks descend from above to try and fill the screen. You’ll need to clear them by bumping your character of choice into the obstructions, with those spade strikes progressing a meter up top to a point where the exit arrives.

While it’s not music based, I couldn’t help but tap to the rhythm again and again. Maybe it’s the sprites’ movements or just the infectiousness of the new arrangements by Jake Kaufman, but it invites that sort of thinking and action. Tracks both familiar and brand new live up to the series’ standard, and are as strong a part of the package as nearly any other element. 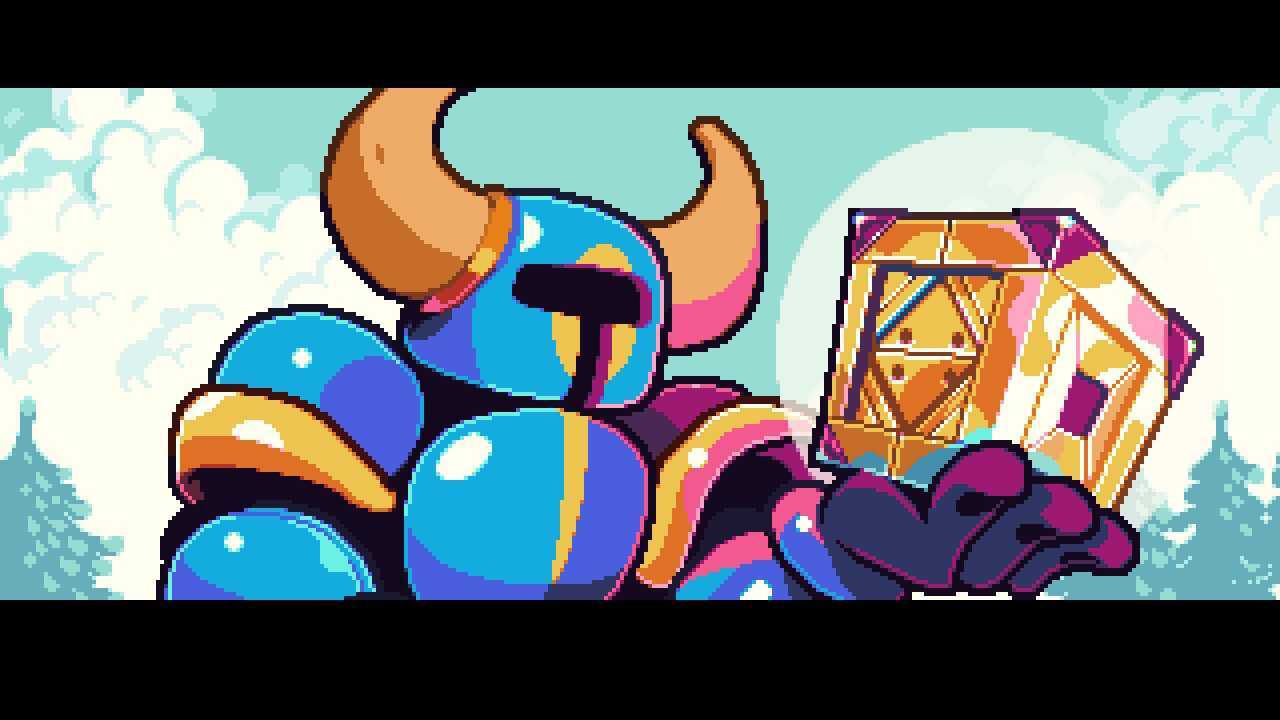 Back on that gameplay, what makes Pocket Dungeon so intriguing and teeth-sinkingly compelling is its damage trade system. Blocks you can break down without issue, though some take more strikes than others. It’s when you’re ramming into enemies that you need to think your moves carefully. Every bash takes off some of Shovel Knight’s health as well, meaning you can’t just hit things without pause. You’ll have to heal yourself between those bouts of hits and knock out connected lines of enemies in massive chains to not just solve these puzzles, but survive them.

As nearly every other puzzle game has taught me, chains are the most satisfying cascadence of actions humanly possible in games – you can quote me on that. If you defeat an enemy and any number of copies of it are adjacent, you’ll chip away at their health simultaneously but only take damage back from the one you’re hitting. By weaving around the board and digging up dirt and other obstructions with some forethought, you can build up some massive clears that’ll shower you in precious gems.

Cash is king yet again in this corner of Shovel Knight’s growing list of titles. By keeping a continuous string of block and enemy clears, your Gem Meter will stay topped off and multiply your returns on those chains. Treasure isn’t just for hoarding, but can be spent both during a run and back at the encampment hub. Visiting Chester in either of those circumstances will let you unlock relics, giving you new capabilities during a run or adding them to the pool of possible items respectively. 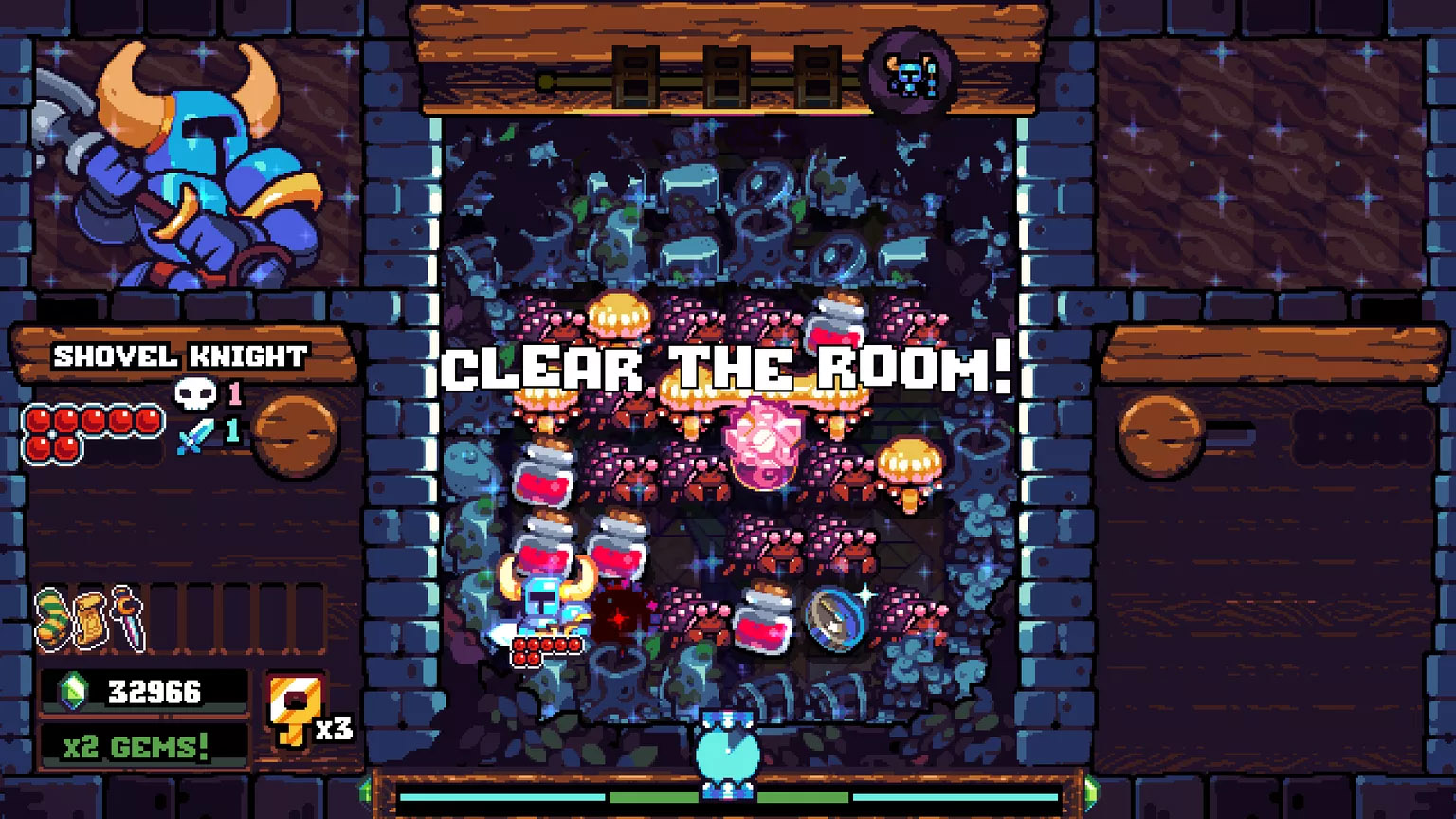 It’s not the most exhaustive list of goods, but it’s enough to give Pocket Dungeon that sense of customizing your approach or rolling with what the randomizer throws at you. Spawning treasure chests will also grant you items, like spears that let you strike a block away from you as well or ways to freeze enemies in place so they don’t strike back. Those, as well as bombs and mysterious portals, keep you on your toes as you work through a stage and try to reach the end of this confounded construct. If there’s any area of the game’s moving parts that felt lacking, it was this – I’d have liked a larger item pool and some unique interactions and synergies.

Where you get more variety is in the growing roster of Knights dwelling at camp. Every member of the Order of No Quarter, Shield Knight, and some new faces can all be controlled and have their own unique traits to factor into the equation. Running into them via boss fights is exciting, and they never feel insurmountable even during a tense run so long as you prioritize survival over rushing through. Better watch out, speedrunners… 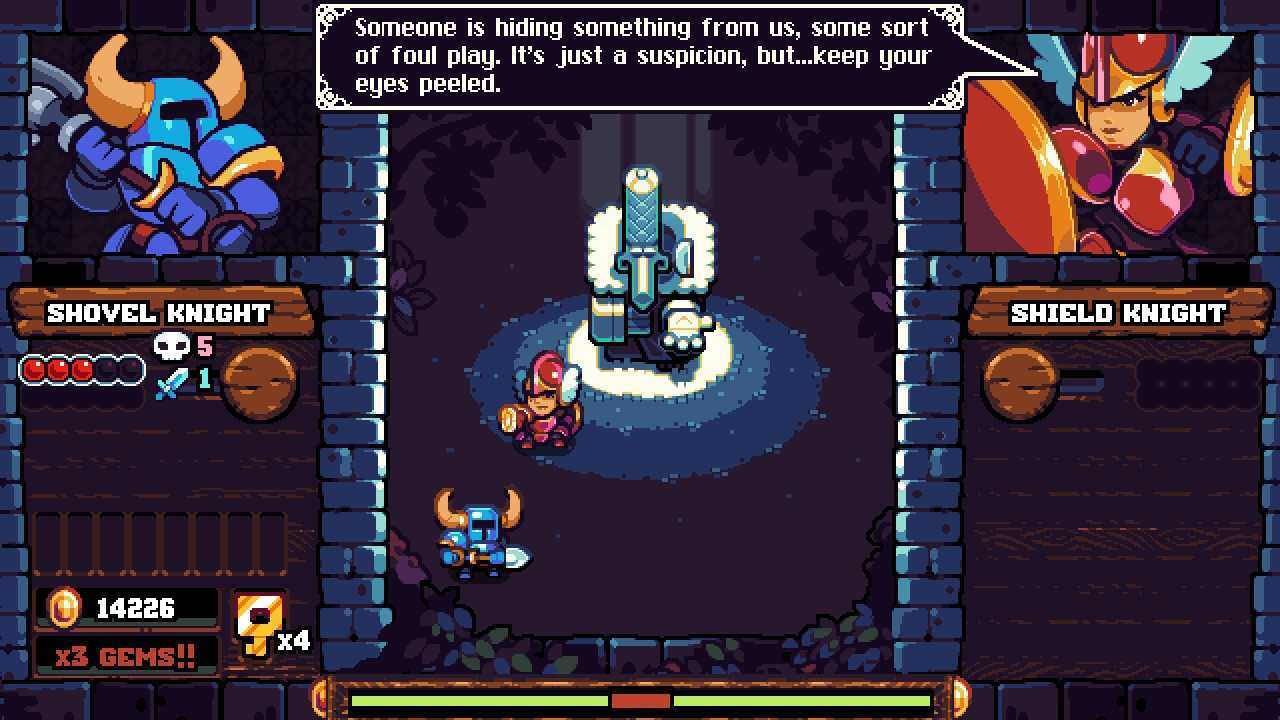 One aspect I definitely appreciated here was that you can technically set the game to play in two different ways. On your first foray, Puzzle Knight will ask if you want things to be more like a puzzle game or more like a rogue-like. What this really means is setting your loss condition – if you want a puzzling experience you’ll have infinite lives but once the board is full of blocks you’re done. Going the other route means as soon as your health hits zero you’ve got to start fresh. Were I railroaded into permadeath right away I don’t think I’d have enjoyed Pocket Dungeon as much as I did, so I definitely encourage players to go puzzle-like while they learn the ins and outs of enemy behaviors.

As a quick footnote, amiibo functionality has returned once again to the world of Shovel Knight. Yacht Club is always proud to give fans a reason to tap those four figures, and here is no exception. Scanning them in will allow a fairy to follow your player character, which isn’t the most enthralling feature but it’s cute and on par with previous unlocks.

While there is plenty to unlock in the game, my biggest sticking point with Pocket Dungeon is that it’s a fairly short affair. That didn’t hold Shovel Knight itself back, of course, but it’s worth mentioning. It’s the sort of game meant to be played again and again, but unlike some genre contemporaries I felt like I saw everything rather quickly. That doesn’t mean I did, and it’s been announced there’s multiple DLC packs on the way, but that sense of being “done” settled in a little fast. 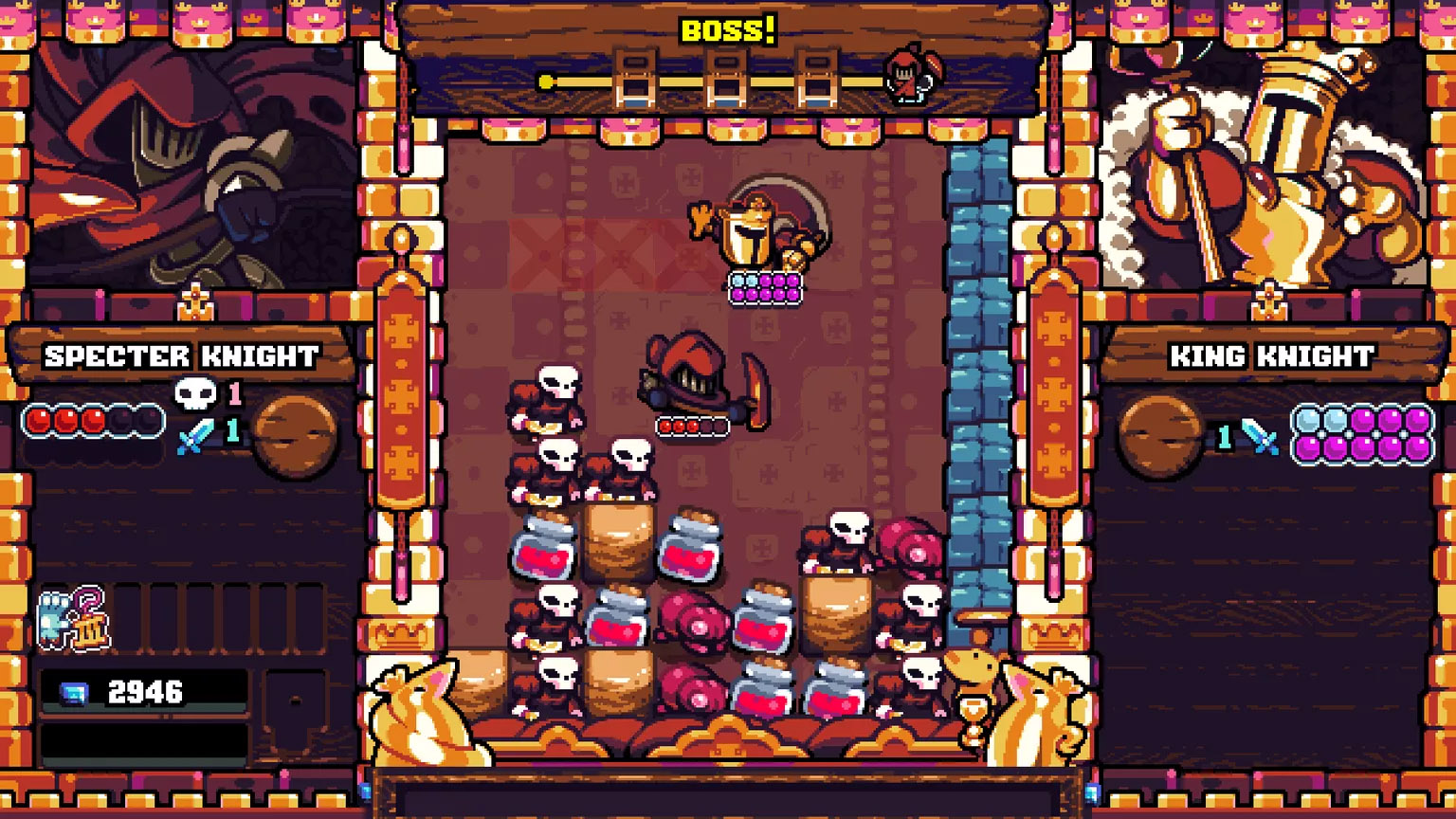 Don’t let that deter you from giving Shovel Knight Pocket Dungeon a go. Though pieces of its are familiar and taken from long standing genres, in uniting them with the series’ panache and pixels we get something unique to pick up and play again and again. Though I might be content to set it aside for now, that fine tuned gameplay and infectious soundtrack have made sure I won’t be gone for long. 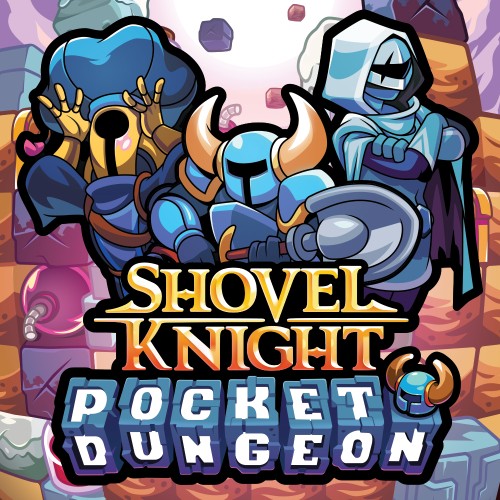