Shantae’s sophomore adventure has arrived on Nintendo Switch at last, joining Shantae and the Pirate’s Curse, Shantae: Half-Genie Hero, Shantae and the Seven Sirens, and (later this year) the original Shantae. That’s right: soon, you’ll be able to play the entire Shantae saga from the comfort of your Switch. This arguable black sheep of the series is an odd one: it isn’t the most well-known or the most popular, and it originally released as a DSiWare title back in 2010. In many ways, it was a stepping stone to what I consider the best game in the series, Shantae and the Pirate’s Curse. Players drawn to the franchise thanks to the recent release of Seven Sirens may be wondering: is this relative fossil worth picking up? And to that I say, “Yes, definitely!” 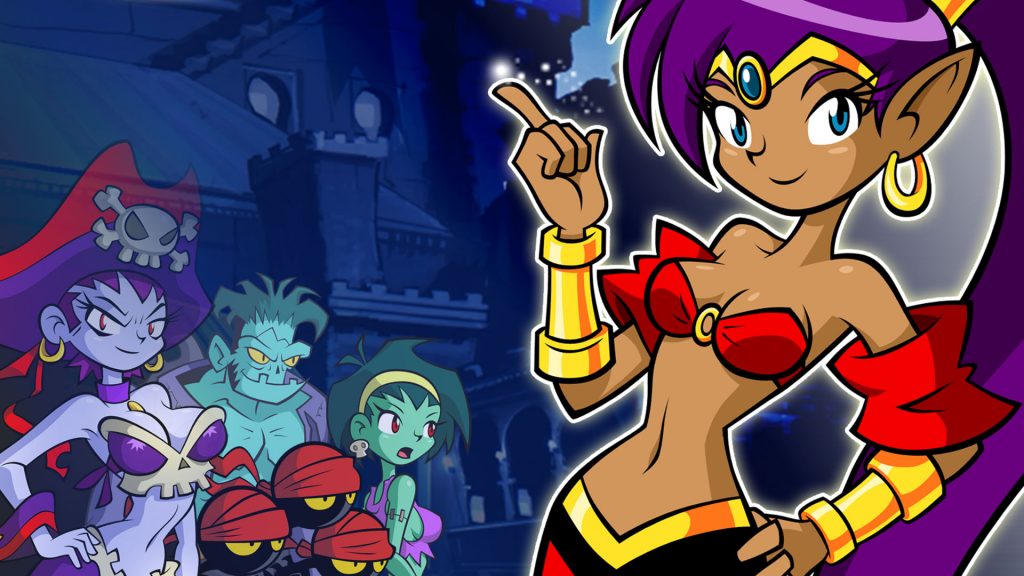 Some of the cast of Shantae: Risky’s Revenge – Director’s Cut.

Let’s begin with a little history lesson, which I think is needed since I feel the game’s “Director’s Cut” moniker can be a little confusing. Shantae: Risky’s Revenge was originally released back in 2010 for the Nintendo DSi as a digital-only downloadable DSiWare title. In 2011, it was ported to iOS. Then, three years later, an enhanced version — Shantae: Risky’s Revenge – Director’s Cut – launched for PC. The Director’s Cut version of the game added a handful of new features, like a new warp system to help players quickly navigate the game world, HD dialogue artwork, a widescreen mode (with borders), and more. Once the Director’s Cut launched, it’s been the version of the game ported to systems ever since, appearing on PlayStation 4, Wii U, and now the Nintendo Switch and Xbox One.

Risky’s Revenge is a direct follow-up to the original Shantae for Game Boy Color, which released eight years earlier. Following Shantae’s Uncle Mimic revealing his latest relic discovery, a magic lamp, her arch-nemesis and pirate queen Risky Boots arrives to steal it. After failing to stop her, Scuttle Town’s mayor removes Shantae from her position as the town’s half-genie Guardian. Blaming herself, Shantae sets out to stop Risky by collecting the three magic seals needed for the latter to use the lamp. Each magic seal is in the possession of one of Sequin Land’s “barons,” whose labyrinth dungeons Shantae must complete in order to defeat them.

Although Risky’s Revenge’s plot leaves much to be desired, it leads directly into its sequel, Pirate’s Curse, and is responsible for introducing some of the series’ most iconic characters, like the Squid Baron. It’s a simple story for a swift, five-to-seven-hour game, but it’s aided by sharp writing and amusing visual gags. Like most Shantae games, the story takes the backseat in favor of tight and rewarding platforming gameplay, which is where Risky’s Revenge – Director’s Cut really shines. 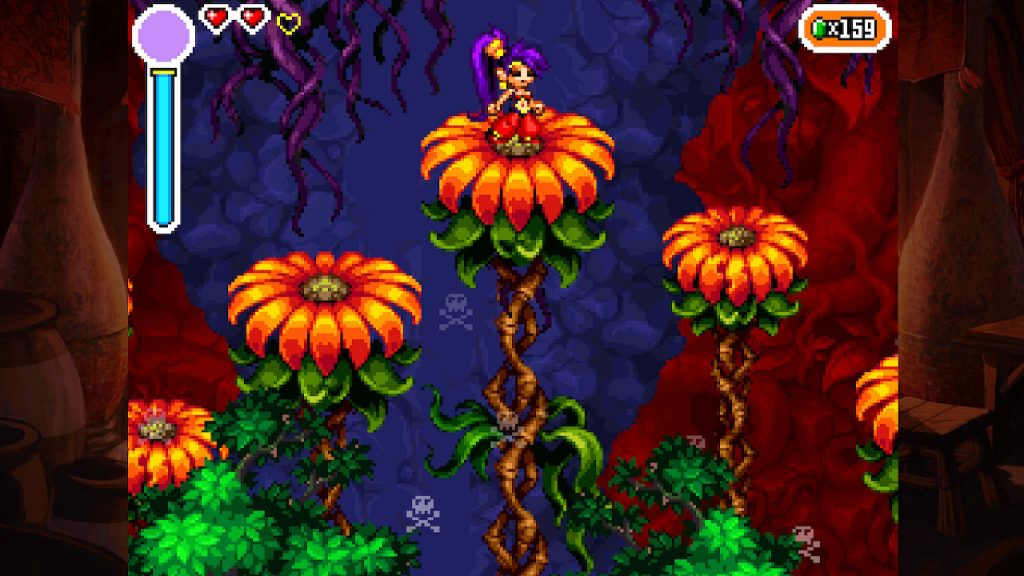 Shantae atop some oversized flowers and a deadly, deadly drop in the game’s first dungeon.

In their quest to stop the nefarious Risky Boots, players will explore the whole of Sequin Land by jumping, crawling, and using Shantae’s signature transformation abilities. Shantae is a half-genie, which allows her to transform into various creatures at will by dancing. These transformations include a monkey for climbing high walls, an elephant to smash open rocks that block new areas, and a mermaid for swimming underwater.

Shantae: Risky’s Revenge – Director’s Cut is a “Metroidvania” platformer, encouraging players to retread past areas each time they unlock a new transformation to discover new treasures and locations. The game is served by a large overworld complete with a hub world called Scuttle Town,  where players can find Shantae’s friends Sky, Bolo, and Uncle Mimic, along with a shop to buy healing potions and magic spells. Dungeons, which house one of the three magic seals Shantae’s after, are scattered throughout Sequin Land. When exploring one of these dungeons, the player will come across plenty of seemingly unreachable areas and locked doors. Only by obtaining the dungeon’s transformation ability can players complete it and face off against its baron.

Small-fry enemies are scattered throughout Sequin Land, which prove no match for Shantae’s main offensive technique: whipping her hair. That’s right: the blade-like nature of the tip of our half-genie hero’s hair can pierce even the strongest armor, and it can be upgraded to be faster and more powerful using gems exchanged at the Scuttle Town shop. Shantae is also equipped with the ability to use different ranged attacks, like fireballs and a spike ball that orbits around her. These weapons, though, must be purchased first — and require the use of magic, which can be replenished through vials collected off defeated enemies. 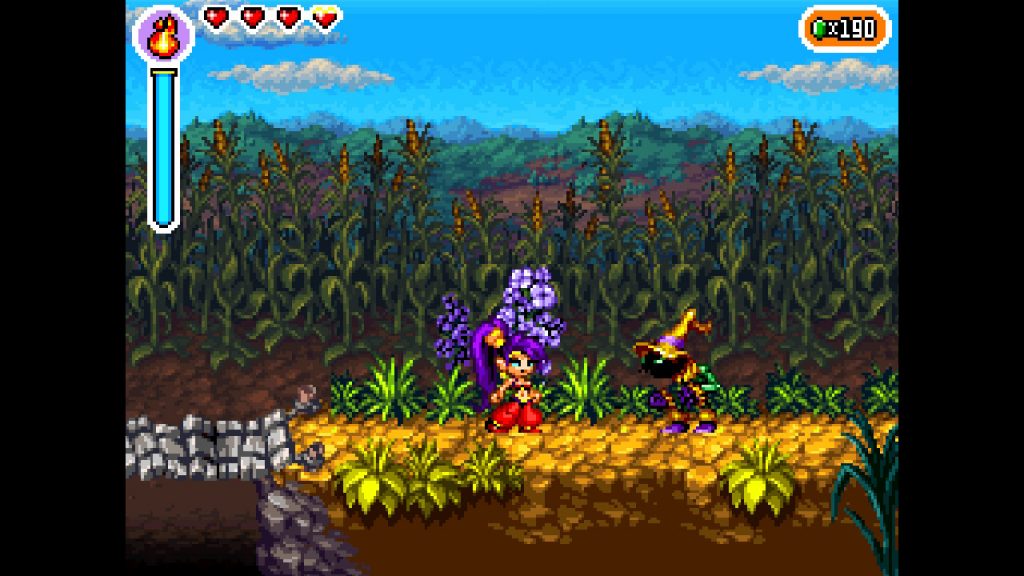 Shantae faces a variety of enemies during her quest across Sequin Land, including creepy scarecrows.

Platforming and combat in Risky’s Revenge are both superb; Shantae feels precise, and I never encountered a jump I felt I failed due to poor controls. The range of enemies encountered are also diverse, each requiring different approaches. For example, while Scarecrows are fairly easy to defeat with a few hair whips, Archers fire arrows that must be ducked unless the player wants to face certain doom. Bosses also require a tiny bit of strategy: the game’s first boss, the Squid Baron, spins across the floor and jumps to damage Shantae, requiring the player to use monkey jumps in combination with her weapons in order to defeat him.

If you’re looking for a challenge, though, you won’t really find it here — at least in the normal difficulty mode. Risky’s Revenge is a pretty easy game, all things considered, although players less experienced with platforming may find some sections a bit tricky. Personally, though, I don’t find this to be a mark against it: I’m not a huge fan of platforming, so to be able to enjoy a game without constantly getting frustrated is a plus for me. After playing through the game once, though, players can select a harder “Magic Mode” which lessens magic consumption but cuts Shantae’s defense in half.

There is one thing I really don’t like about Risky’s Revenge, though, and that’s the way Shantae gets from place to place. The Warp System is handy for teleporting from one major area to the next, but Risky’s Revenge — for whatever reason — also uses a “jump” system to move between locations. While places like Scuttle Town and Tangle Forest are navigable from side-to-side, they’re also “layered,” meaning Shantae must jump from foreground to background to get around, as well. She can only jump between “layers” using specified jump platforms throughout the world. Often, a player will need to solve somewhat of a puzzle trying to get to a specific area by using the jump platforms in a specific order. While I get that developer WayForward was trying to add a little flavor to what is otherwise a standard side-scroller, I just found getting around more annoying than anything — especially given that you have to watch Shantae’s jumping animation every time you want to get from one layer to the next. Traversing Sequin Land takes a lot longer than it needs to because of this, but fortunately, Risky’s Revenge is the only game in the series to have this mechanic. 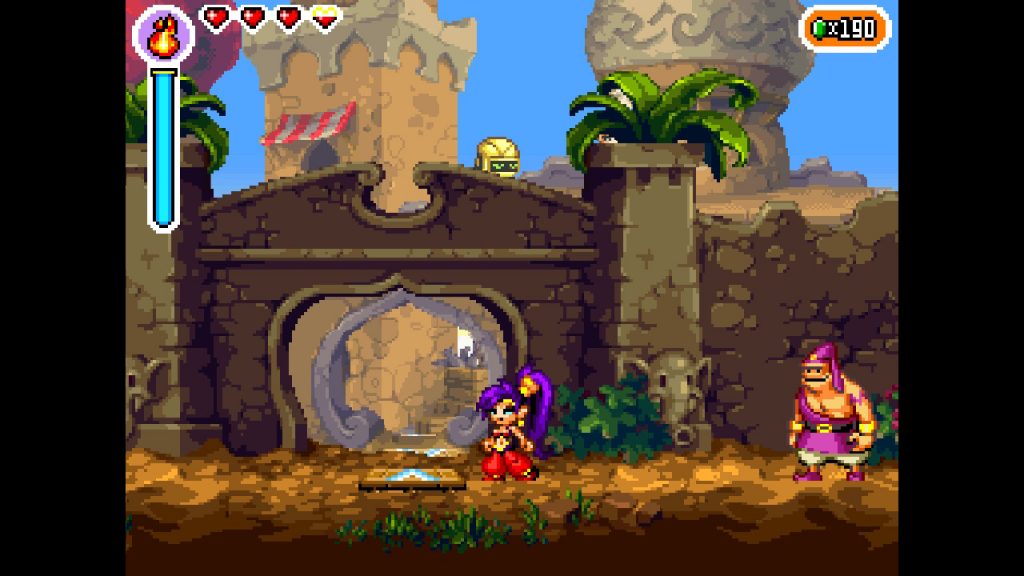 Shantae’s expression sums up my feelings towards the jump system well. 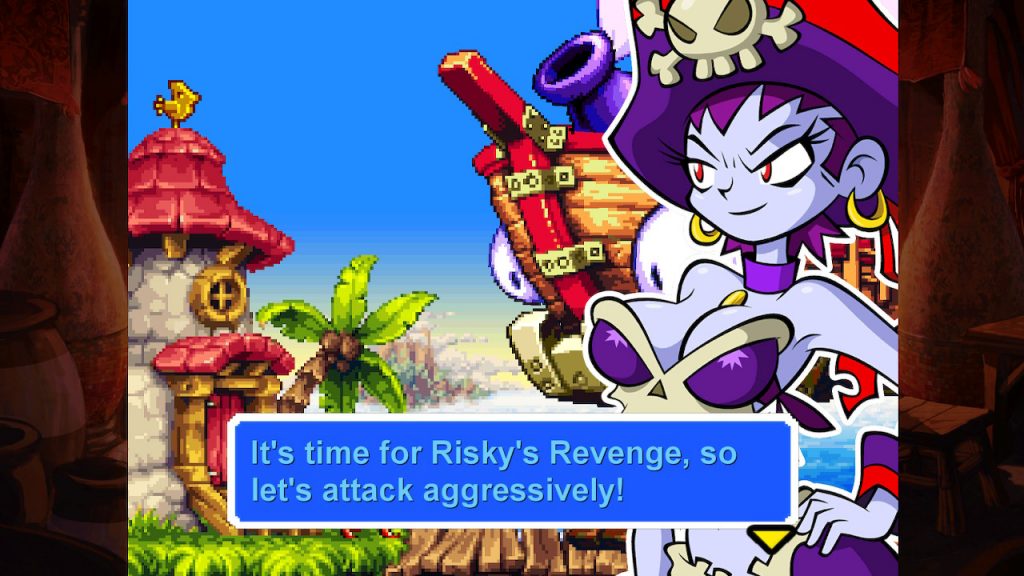 Pixel art is used throughout the game, with high-quality art appearing during most dialogue.

Shantae: Risky’s Revenge – Director’s Cut shares the same art style as its sequel, Shantae and the Pirate’s Curse: charming pixel art that I think is Shantae at its finest. Don’t get me wrong: the HD art used in Half-Genie Hero and Seven Sirens is gorgeous, but I felt the series lost a lot of its character during the move from pixel to drawn. Sprites look great as do backgrounds and foregrounds, and replaying this game for this review just made me wish they’d continued to use this art style for the more recent Shantae titles. The game includes HD artwork of most characters during dialogue sequences, but don’t be surprised if you think it looks dated. These were interpretations of the characters from almost a decade ago, after all.

Since the game is a port of a port of a DSiWare title, players have a few display options when playing Risky’s Revenge – Director’s Cut. The standard screen mode is 4:3 with borders, but you can also play 4:3 without borders, stretched widescreen, and even at the game’s original DSi resolution. I personally think the game looks best on the standard 4:3 with borders setting, but it’s a shame the game was never given a true, non-stretched widescreen revamp.

The game’s writing is light-hearted and funny, although certainly not the best in the series. Still, all the dialogue in the game oozes with personality despite the… many, many grammatical errors littered throughout. Meanwhile, the UI is… well… the game has one and that’s an automatic 5/10 for me, I guess. The user interface isn’t great. It’s kind of ugly with unappealing colors, gross gradients, and a gray background that looks like it was made in MS Paint. The map is tucked within the player’s inventory items despite the icon just saying “MAP,” and the map itself is confusing as all hell (thanks to the “jump” system I described earlier). 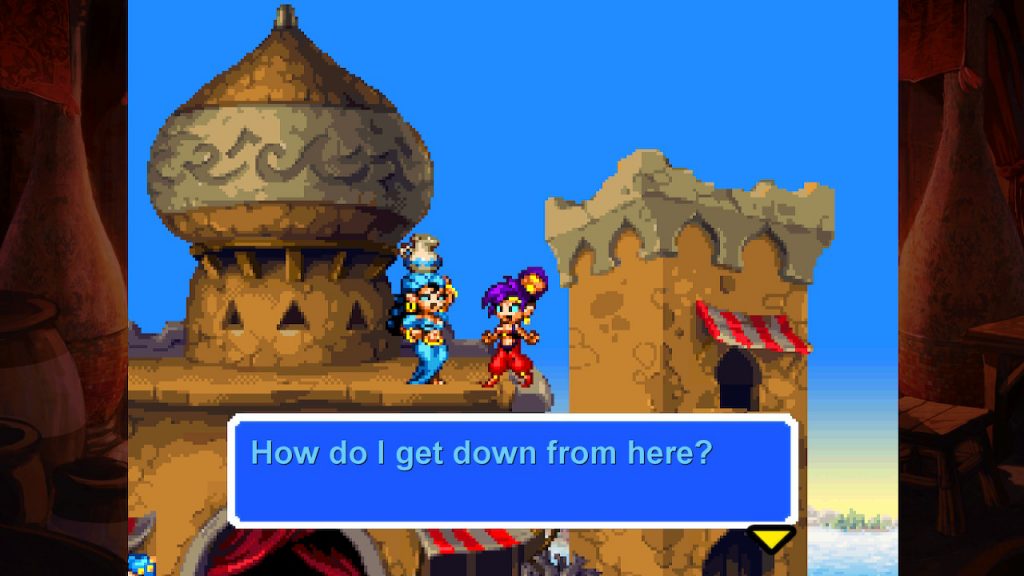 The music, though… *chef’s kiss*. It’s fantastic thanks to composer Jake Kaufman, who’s worked on every Shantae game until Seven Sirens. Every track is memorable, from the shop music to the iconic Scuttle Town theme. And while his Risky’s Revenge arrangements are great, they aren’t even his best work for the series!

Risky’s Revenge – Director’s Cut plays as well as you’d expect both in docked and undocked modes. There isn’t really much to say here: I didn’t experience any performance issues whatsoever, so you can feel confident whichever method you use to play the game. I was genuinely surprised, though, to find that WayForward incorporated touchscreen controls in the menus — a carry-over from the original DSi and iOS versions (I can’t remember if it included them on the Wii U version). It’s a nice touch, especially given that many developers (including Nintendo itself) don’t even bother utilizing the Switch’s touchscreen capabilities.

Pick up any Shantae game and you know you’re in for a good time. The combination of humor, tight platforming, exploration, great music, and memorable characters is what makes Shantae one of my favorite video game series. Risky’s Revenge definitely isn’t the best in the franchise: It isn’t the funniest, it doesn’t have the best dungeons or the best music, it has cumbersome traversal, and its UI leaves much to be desired. Like I said, in many ways it was a stepping stone for its sequel, Shantae and the Pirate’s Curse. But for new Shantae fans and even old ones that never played Risky’s Revenge, it’s definitely worth a play — especially at $9.99 USD. 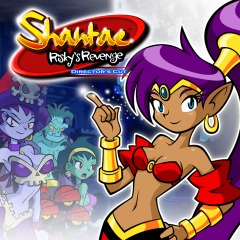