From Shovel Knight and Wonder Boy to the Blue Blur’s triumphant return to blast processing, Nintendo’s new portable console is quickly becoming the go-to place for gaming’s most hallowed mascots and fans of old school platforming. Not to be left in the dust, the pharaoh of this retro renaissance, WayForward, was quick to follow suit with its buxom beauty’s latest misadventure in pirate pummeling — Shantae: Half-Genie Hero.

Alongside a much more streamlined approach to the classic Metroidvania formula, Half-Genie Hero lovingly merges modern 3D graphics with traditional 2D gameplay to once again raise the standard by which modern platformers live and die. A few minor grievances aside, Shantae’s half-genie’d adventure is anything but, valiantly upholding her legacy as both a founding matriarch of the indie landscape and tour de force in shaping the modern platforming genre.

For all you scurvy-riddled scallywags who’ve yet to tango with a Tinkerbat, Half-Genie Hero pits players in the parachute pants of Scuttle Town’s plucky protector, Shantae, in a journey of hip swaying heroics and magical mishaps. Risky Boots — pernicious pirate and self-proclaimed Queen of the Seven Seas — is back with a vengeance, laying siege to the peaceful seaside settlement in an attempt to sink her hooks in a machine capable of devastating destruction. As far as compelling narratives go, it’s about what you’d expect from a 2D side-scroller featuring murderous mermaids and Part Omni-Organic, Partially Titanic, Ocean-Optional Tinkerslugs (Poop Toot for short, but don’t call it that). True to its retro roots, the story never takes itself too seriously, containing just the right amount of engaging dialogue to humorously propel events forward without ever feeling intrusive to the action. 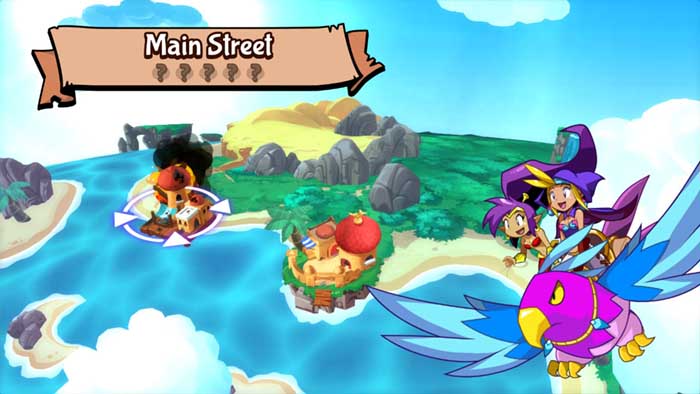 While I’m personally a sucker for her more pixelated predecessors, the purple haired heroine’s hand-drawn makeover proves nothing short of breathtaking. Its Saturday morning cartoon charm perfectly complements the series’ tongue-in-cheek nature, especially when Shantae herself — a self-aware parody of familiar 16-bit idols — is at her snarkiest. WayForward’s love for the universe it’s created is on full display, with each character meticulously animated against gorgeous 2.5D backgrounds to help the game world pop with life and vibrancy. Seeing everything in motion on a television while docked is particularly captivating, especially during the game’s opening stage as Shantae’s theme song — performed in-character by voice actress Cristina Vee — softly serenades the screen.

Speaking of tantalizing tunes, the only thing more endearing than the luscious visuals is Half-Genie’s enchanting soundtrack. The great Jake Kaufman returns with yet another masterful symphony of body bustling beats you can’t help but get up and dance to. Most impressively, Kaufman’s use of leitmotif is expertly woven into each and every track, maintaining a mild, yet catchy Middle Eastern vibe throughout your Arabian adventure. Songs themselves range in tone from synth-heavy to disco, often feeling ripped straight out of classic Sonic or Castlevania titles. Without a doubt, it’s my favorite aspect of the jovial genie’s HD transformation, having shamelessly listened to it at nauseam while writing this review.

DANCING THROUGH THE DANGER

While looks can often be deceiving, Shantae’s inner beauty burns bright as one of the most satisfying side-scrollers around not featuring plump plumbers or super fighting robots. The scantily clad protagonist’s movement feels fast, fluid and graceful, expertly employing the tight controls and delicate nuance commonly associated with the genre’s finest. Boss fights in particular are intricate and intense undertakings requiring persistent pattern memorization, especially true for anyone brave enough to crank up the heat with the game’s significantly more challenging Hardcore Mode. 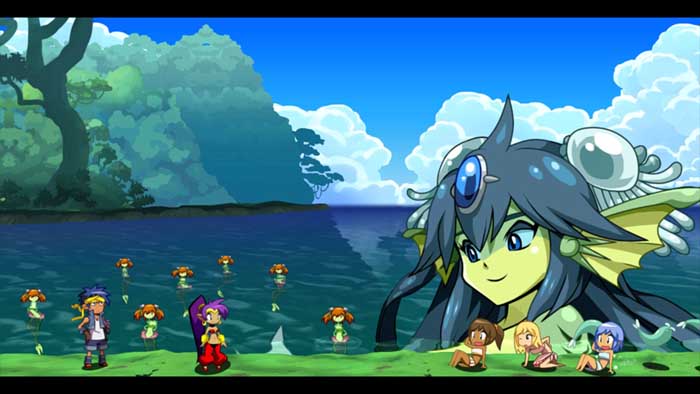 Unlike its predecessors, Half-Genie Hero is a far more linear affair taking greater inspiration from both the Blue Bomber and Belmont Clan than Nintendo’s Bodacious Bounty Hunter. Gone are interconnected overworlds and maze-like dungeons to explore, instead replaced with a handful of streamlined stages of pixel-perfect platforming themed to gorgeous locales and stunning set pieces: from desolate deserts and lush forests to frenetic factories and haunted mansions. Fortunately for the Metroidvania faithful, the level design remains nothing short of spectacular, chock-full of hidden nooks and crannies worth exploring and secret power-ups to collect. As an added attention to detail, stage environments themselves will occasionally adapt to the defeat of their respective big bad, assuring any repeat visits for that final elusive heart holder remains fresh and exciting.

This sense of exploration, as any Shantae fan knows, is one of the key driving forces behind the series’ seductive appeal. Fortunately, after their swashbuckling departure in Pirate’s Curse, the mystical maiden’s iconic transformation powers return in fantastic fashion to encourage diligent backtracking and fill that Metroid shaped void in all our hearts. In addition to whimsically whipping enemies into shape with her silky split ends of justice, Shantae can perform a belly dance to turn into a number of crafty critters, each with its own unique set of attacks and abilities. These animal companions run the gamut from wall climbing monkeys to ground pounding elephants, and aside from being utterly adorable, are primarily called upon to reach previously inaccessible areas and unlock new enhancements. They’re rarely useful in a fight, though each transformation serves its purpose well in solving the game’s many light puzzles, despite one or two feeling a tad underutilized. (I’m lookin’ at you with all eight eyes, Spider form). 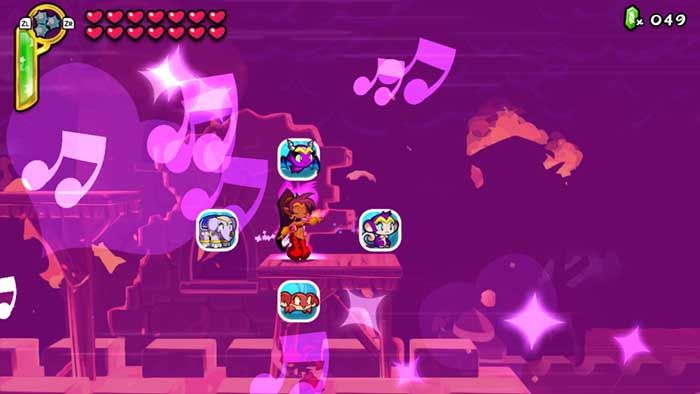 Given the opportunity to nitpick, my only gripes with the game were the relatively short completion time and absence of full voice acting. With my initial playthrough clocking in at just over five hours (at near 100% completion, mind you), I couldn’t help but feel my journey strutting through Sequin Land was over far too quickly. Considering the absence of dungeons and the fact half your time is spent backtracking through previously cleared areas, another stage or two could have done wonders in reducing needless padding and a few instances of questionable pacing.

As for my latter grievance, it’s unfortunate the Kickstarter campaign couldn’t reach its respective stretch goal, as the limited voice acting on tap is comically delightful in every sense of the term. As it stands right now, most characters simply vocalize via dismayed grunts or maniacal laughter, while those cast in larger roles seemingly chime in at random. I’ve heard its limited scope can come off a bit jarring at times to some players, though I simply lamented over the missed opportunity, oftentimes dreaming up the endless possibilities afforded by a bigger budget. Again, it’s a minor quibble barely worth mentioning in the grand scheme of things, though some players may find it disappointing. 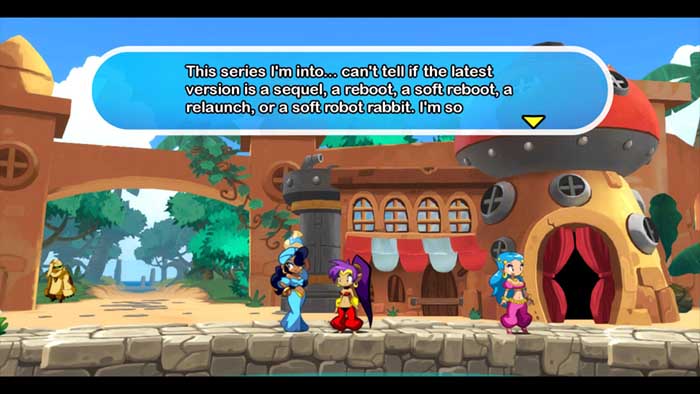 Whether a sequel, reboot, soft reboot, relaunch or soft robot rabbit, there’s no denying Half-Genie Hero hits all the right notes as one of the finest platformers to ever grace the medium, let alone the Nintendo Switch. Despite the game’s relatively short length and a few moments of questionable pacing, its dazzling hand-drawn look, memorable music and streamlined Metroidvania gameplay culminate into one of the belly dancing djinn’s most engaging and accessible adventures to date.

Bottom line: this is one half-genie hero that warrants your full-bodied attention. 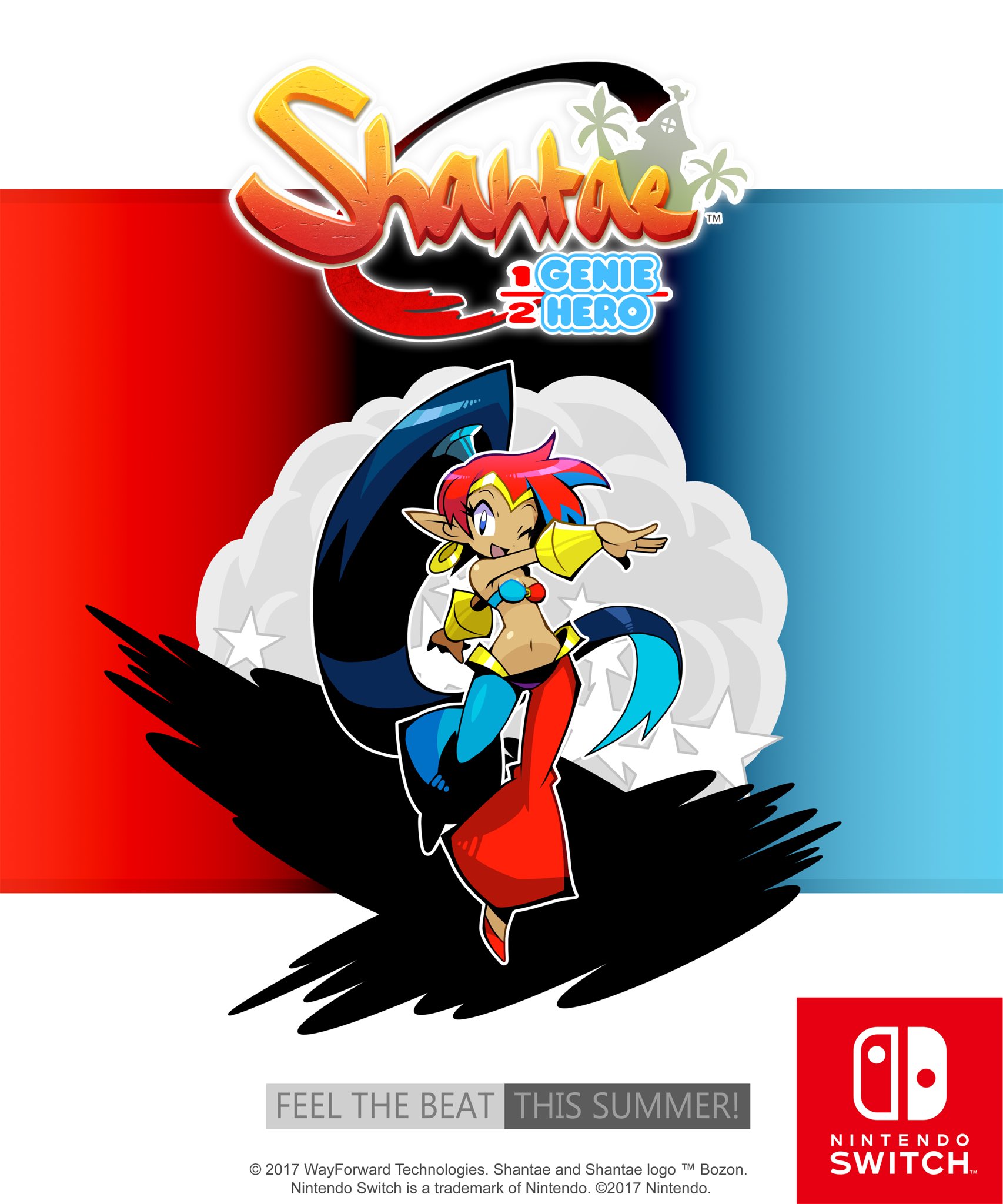